Question 1.
What is a herbarium?
Answer:
A herbarium is defined as a collection of plants, that have been dried, pressed and preserved on sheets.

Question 2.
Define venation.
Answer:
The mode of arrangement of veins and veinlets is called venation.

Question 3.
“Earthworms are called friends of farmers”. Justify the statement.
Answer:
As they increase soil fertility by their worm castings and by making the soil porous by burrowing.

Question 6.
Why are mitochondria called “powerhouses of the cell”?
Answer:
Produce cellular energy in the form of ATP.

Question 8.
Name the essential element that is present in chlorophyll.
Answer:
Magnesium.

Question 10.
Mention the hormone that regulates the 24-hour (diurnal) rhythm of the human body.
Answer:
Melatonin.

Question 13.
(a) Why bryophytes are called amphibians of the plant kingdom?
(b) Cycas is considered a naked seeded plant. Give a scientific reason.
Answer:
(a) Bryophytes can live in soil but require water to complete sexual reproduction.
(b) Ovules are not enclosed by my ovary wall and remain exposed.

Question 18.
Mention two types of movements exhibited by the cells of the human body with an example for each.
Answer:
1. Amoeboid Movement/Pseudopodial movement :
Macrophages and leucocytes exhibit amoeboid movement. It is also seen in the amoeba. Amoeboid movement is affected by pseudopodia formation by cytoplasmic streaming. It also involves cytoskeletal elements like microfilaments. 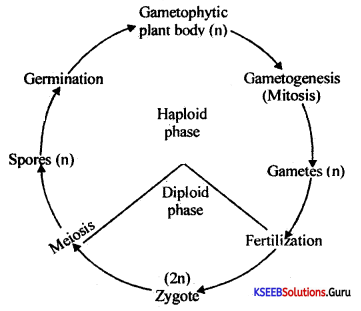 Question 20.
Explain any three types of aestivation in lowering plants.
Answer:
Aestivation of calyx and corolla:
The mode of arrangement of sepals, petals or even tepals in a flower bud is called aestivation. The different kinds of aestivation are as follows:

Question 22.
Write the schematic representation of steps involved in the formation of ethyl alcohol during fermentation of glucose.
Answer:
The first step of anaerobic respiration is glycolysis, in which glucose is incompletely oxidised to 2 pyruvic acid molecules with 2 ATP and 2NADH2 formed as by-products.

In alcoholic fermentation, the pyruvic acid is first decarboxylated to acetaldehyde liberating CO2. Later acetaldehyde is reduced to ethyl alcohol by NADH2 of glycolysis.

This process occurs in anaerobes like yeast and bacteria.

In lactic acid fermentation, the pyruvic acid is directly reduced to lactic acid by NADH2 of glycolysis. NO CO2 is liberated. It occurs in lactobacilli and skeletal muscles. 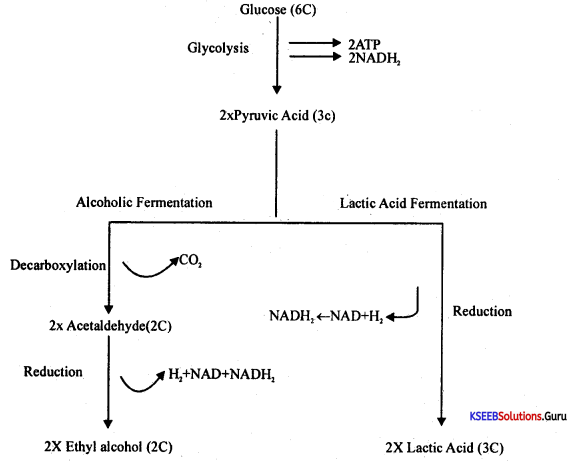 Question 23.
Write about any three disorders of the digestive system.
Answer:
JAUNDICE IICTERUSI:
It is the most common digestive disorder. Jaundice relates to the yellow appearance of skin, urine, nails and cornea of the eye due to an increased Bilirubin pigment (Bile pigment).

Jaundice is of three types:
1. Haemolytic Jaundice or Neonatal Jaundice or Pre hepatic Jaundice: It is commonly found in newly born babies up to one week of age. It is due to excessive haemolysis (Destruction of RBC’s).

Question 24.
What is: (a) Tidal volume, (b) Residual volume, (c) Vital capacity?
Answer:
(a) Tidal volume (VT): It is the volume of air inhaled or exhaled with each inhalation and exhalation without any extra effort. Its volume ¡s 500 ml.

(b) Residual volume (RV): It is the volume of air that remains inside the lungs at the end of forceful expiration. Its volume is 1100 – 1200 ml.

Dedifferentiation: Permanent cells like parenchyma can revert back to meristematic activities (cell division) to form secondary persistent. This conversion is called Dedifferentiation.

Redifferentiation: If the secondary meristem divides to produce new cells, which further differentiate to form micelle cells, and once again lose the capacity to divide, then it is called Redifferentiation.

Question 26.
Classify the animals with an example each based on the chief excretory product produced in them.
Answer:
Based on the type of excretory product produced, animals are divided into 3 groups:
1. Anunonoteic animals: Animals that excrete ammonia as nitrogenous waste products are called ammonotelic animals.
e.g: Aquatic invertebrates and bony fish, larvae of frog (Tadpole).

2. Ureotelic animals: Animals that excrete urea are called ureotelic animals. Urea is produced by the liver during the ornithine cycle. Urea is stored in the urinary bladder in a dissolved state called urine.
e.g: Cartilaginous fish (Shark), Mammals and Amphibians.

Question 28.
Describe the important events that occur during anaphase and telophase of mitosis.
Answer:
Anaphase (Gr:ana-up; phases-stage):
Anaphase is characterized by the following features.

Telophase (Gr:telos-end; phases-stage):
It is characterized by the following features.

Question 29.
Draw a labelled diagram showing the anatomy of the leaf of a typical monocot plant.
Answer:

Question 30.
(a) Carbon, nitrogen, phosphorous, sulphur, calcium, etc, are considered essential elements. What are the criteria for considering them as essential? (3M)
(b) What is the role of leg-haemoglobin in leguminous plants? (1M)
(c) Name a soil bacterium that helps in nitrification. (1M)
Answer:
(a) The element must be absolutely necessary for supporting normal growth and reproduction, and in the absence of the element, the plants do not complete their life cycle.

(b) Leg haemoglobin protects nitrogenase enzyme from oxygen and acts as an oxygen scavenger.
(c) Nitrosomonas.

Question 31.
Write the schematic representation of the Calvin cycle.
Answer:
It occurs ¡n grana of the chloroplast.
It utilises the assimilatory powers i.e., ATP and NADPH2 produced ¡n light reaction. 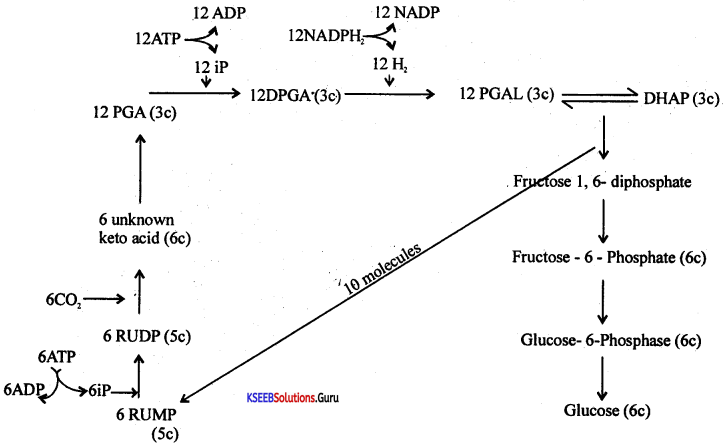 Note:- To complete a Calvin cycle, 18 ATPs and 12 NADPH2 molecules are required.

Question 33.
Draw a labelled diagram showing the ultrastructure of a plant cell.
Answer: 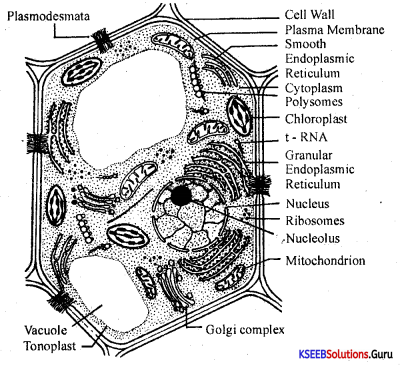 1. Squamous epithelium :
1. It occurs in the skin of vertebrates, alveoli of lungs, the mouth cavity, etc.
2. The cells are nearly hexagonal, flat and plate-like. 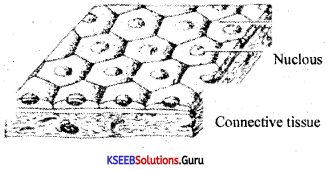 3. A spherical or oval nucleus is found at the cell centre.
4. The cells are closely fitted without intercellular space. Hence look like a mosaic pavement. Because of this squamous epithelium is also called pavement epithelium.

Function:
1. It forms a continuous cover and protects the inner tissues.
2. It helps in ultrafiltration in Bowman’s capsule.
3. It helps in the exchange of gases in alveoli.

Question 35.
Explain the pressure-flow hypothesis of the translocation of organic solutes.
Answer:
According to Munch, food materials are translocated from the source (leaves) to sink (roots) enmass, through a turgor pressure gradient that occurs between leaves and roots. The mechanism of translocation can be explained as follows:

1. Sugars are fonned in the mesophyll cells during photosynthesis and are loaded into the phloem sieve elements of veins. This is called vein loading.

2. The osmotic potential in the phloem becomes more negative, and as a result, water is drawn into phloem elements from xylem cells.

3. Turgor pressure increases in the sieve tubes of leaves, and at the same time the turgor. the pressure of roots becomes less. So a turgor pressures gradient occurs between mesophyll cells and root cells.

4. As a result, food molecules in solution form, are translocated from leaves Tc roots.

5. In the roots the food ¡s consumed, and in the fruits, it is converted into insoluble starch. So osmotic potential and turgor pressure in the roots and storage organs decreases.

Munch conducted a physical experiment to demonstrate the mass flow. He took two osmometers A and B, with concentrated sugar solution in A and B filled with a dilute solution.

These are connected by a ‘U’ tube C. A B is immersed in a trough containing water.

Now water enters into ‘A’, due to high osmotic pressure and this creates turgor pressure.

This results in the mass flow of sugar solution from A to B through ‘C’ until equilibrium is attained and maintained. He compared osmometer A to leaves, B to roots, C to phloem, and water in vessels to xylem vessels. This clearly explains the mass flow hypothesis.

Question 36.
(a) Explain the mechanism of clotting of blood. (3M)
(b) Differentiate pulmonary and systemic circulations. (2M)
Answer:
Blood has a unique property. As long as circulating inside the body it retains the fluid state however as soon as blood comes out of the body as a result of a cut or an injury, blood is transformed from fluid state to gel state, preventing further loss. This self-regulating mechanism of the blood is known as clotting of the blood.

The mechanism of blood clotting is explained by various theories out of these ‘Best and Taylor’s theory is one. According to this theory. four factors are responsible for blood clotting.

Chemical events leading to the formation of b od clot as suggested by ‘Best and Taylor’s theory can be represented as follows.

The reaction shown above indicates that the inactive Prothrombin is converted into active thrombin by the catalytic activity of the enzyme Thromboplastin in the presence of Ca2. The activated thrombin reacts with soluble fibrinogen, resulting in the formation of insoluble fibrin.

The fibrin threads form a mesh-like network in which the blood components get entangled, and results in blood clots and thus prevents bleeding.

Best and Taylor’s theory doesn’t consider the role of platelets in the blood clotting mechanism.

Question 37.
Draw a labelled diagram of the human brain in the sagittal section.
Answer: 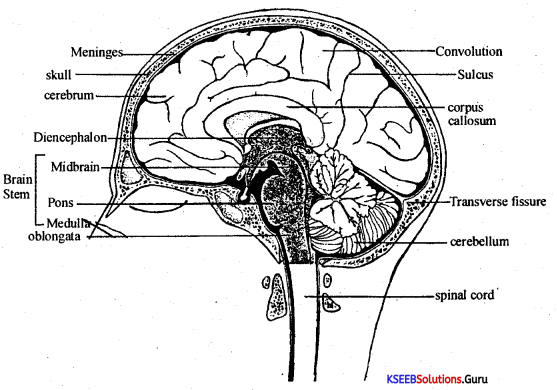