Question 3.
Define coding.
Answer:
The process of algorithmic solution or flowchart solution into a set of instructions in a programming language is called as coding.

Question 4.
What is the difference between = and == operators?
Answer:
The = is an assignment operator and == is a relational operator.

Question 9.
What is a header?
Answer:
A header in word processor is a special area at the top of every page, normally allocated in the top margin area.

Question 13.
Define object code and source code.
Answer:
1. Object code:
The object code is usually a machine code which can be understood directly by a specific type of CPU.

Question 14.
Write the syntax and example for WHILE loop.
Answer:
Syntax of while loop: 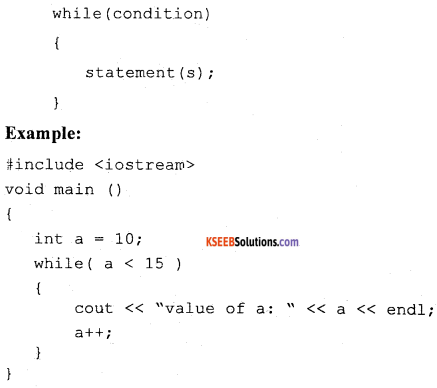 III. Answer any Five of the following Question. Each question carries three marks: (5 × 3 = 15)

Question 19.
Explain impact printers. Give an example.
Answer:
Impact printers forms characters or images by striking a mechanism such as a print hammer or wheel against an inked ribbon, leaving an image on paper. For example, dot matrix printer.
Explain the different types of ROM.

1. PROM:
PROM stands for Programmable Read Only Memory and is initially blank. The manufacturer can write data/program on it by using special devices. However, once the program or data is written in PROM chip, it cannot be changed.

2. EPROM:
EPROM stands for Erasable Programmable Read Only Memory and is also initially blank. Unlike PROM, the data written in EPROM chip can be erased by using special devices and ultraviolet rays.

3. EEPROM:
EEPROM stands for Electrically Erasable Programmable Read Only Memory. This kind of ROM can be written or changed with the help of electrical devices. So data stored in this type of ROM chip can be easily modified.

Question 22.
What is an algorithm? Name any two characteristics of an algorithm.
Answer:
An algorithm is defined as “step by step procedure to solve a given problem infinite number of steps”.

Example:
Y = 5;
cout<< ++Y;
output: 6.
The post-increment operators is also unary operator and is used to increment the value of variable after the use of expression.
For example;
Y=5;
cout<< Y++;
output: 5.

Question 24.
Briefly explain the input and output operators in C++ with their syntax and example.
Answer:
1. Input Operator:
Syntax:
cin >> variable.
Example:
The statement cin>> num;
is an input statement and causes the program to wait for the user to type in a number. It takes the value from the keyboard and assigns it to the variable on its right.

2. Output Operator:
Syntax: cout<< expression or manipulator
Example:
The statement Cout<< “ the numbers”;
It is an output statement and causes the program to print the message on the standard output.

Question 25.
Define two-dimensional array. Write its declaration syntax and give one example.
Answer:
Two dimensional array is a collection of elements of similar type that share a common name, structured in two dimensions. Each element is accessed by two index values.
Syntax:
<data-type> <array-name> [<size1>] [<size2>];
Example:
int a [ 10] [ 10];

IV. Answer any seven of the following questions. Each question carries Five marks: (7 × 5 = 35)

3. Diligence:
After doing work for sometime, humans become tired but computers do not become tired. They work continuously. In fact, some computers which control telephone exchanges are never stopped. This is called diligence.

4. Accuracy:
The results that the computers produce are accurate provided data and programs are reliable.

5. Versatality:
We can use computer to perform completely different type of work at the same time.

6. Reliability:
Computers work for many years without any problem. Few computers in the world are never switched off.

Now add this to minuend i.e.,

Question 29.
Explain the various types of errors detected during testing.
Answer:
The different program errors are as follows;
1. Synta’x error:
It occurs when there happens to be a misuse of a programming language’s instructions. It happens at the time of compilation. Such errors need to be rectified before proceeding further.

Runtime Error occurs at run-time. Such error cause a program to end abruptly or even cause system shut-down. Such errors are hard to detect.

3. Logical Error:
It may happen that a program contains no syntax or run-time errors but still it doesn’t produce the correct output. It is because the developer has not understood the problem statement properly. These errors are hard to detect as well.

Question 31.
Explain if-else-if statement with general syntax and give one example.
Answer:
The if else if statement is an extension of the “if else” conditional branching statement. When the expression in the “if’ condition is “false” another “if else” construct is used to execute a set statements based on expression.
Syntax: 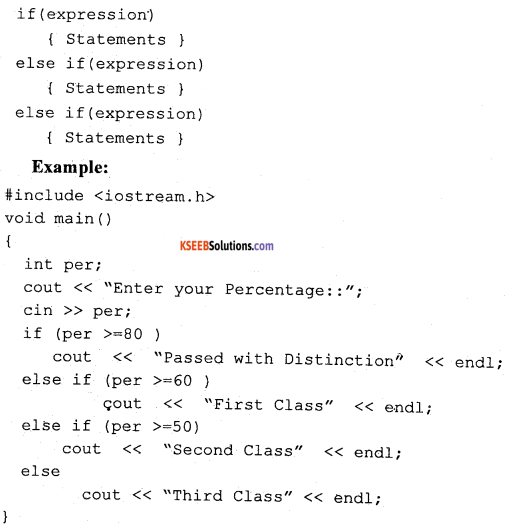 Question 32.
Draw a flowchart to find the factorial of a number.
Answer: 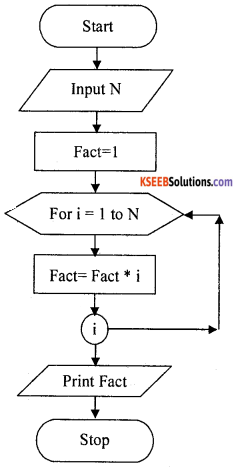 Question 33.
Write a C++ program to find the sum and average of n numbers.
Answer: 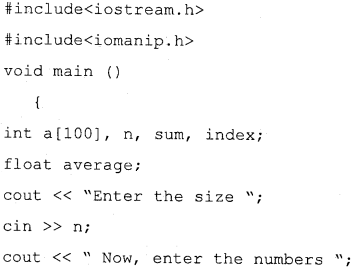 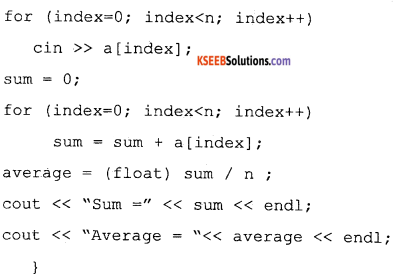 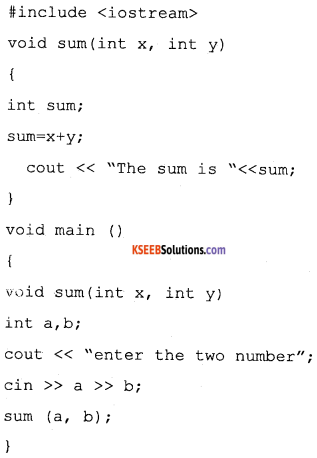 In the above example, sum() is a user defined function. main() is a calling function gives a function call sum (a, b); with actual arguments a, b. The copy of values of a and b are sent to formal arguments x and y in the called function stim().

The function sum() perform addition and gives the result on the screen by itself. Here no value is sent back to calling function main() can be observed. These kinds of functions are called “Function with argument but no return values”.

Question 35.
What is a worksheet? Explain the steps used to change the size of rows and columns in a worksheet.
Answer:
An Electronic spreadsheet is application software and worksheet is divided into rows and columns to store items like student marks, stocks, income and expenses, debits and credits.

Question 36.
Explain the various options of the formatting toolbar in the spreadsheet.
Answer:
It is a toolbar that has the icons that provide the various formatting settings for cells, columns, rows and data in Excel. For example, it can allow to change the colours of rows, cells and columns. It allows to change fonts. It allows to set the alignment for data in cells. It allows to apply borders to cells.

It allows to change the format of numbers, like adjusting the amount of decimals they have or changing them to percentage format. All of these and other things can be done with it.

2. Number tab:
The data type can be selected from the options on this tab. Select General if the cell contains text and numbers, or a different numerical category if the cell is a number that will be included in functions or formulas. The number tab can be used to limit the number decimal places,

3. Alignment tab:
These options allow you to change the position and alignment of the data within the cell. For example, right, left, center, vertical alignments, text wrap, etc.,

4. Font tab:
All of the font attributes are displayed in this tab including font face, size, style, and effects. For example, bold, italicize, underline, increase/decrease the font size, changing the color of font, fill, etc.,

5. Border and Pattern tabs:
These tabs allow us to add borders, shading, and background colors to a cell.