Question 2.
What is the use of the Input Unit?
Answer:
It is used to feed data and instructions into the CPU fed by the user through input devices.

Question 4.
Define Constant in C++.
Answer:
The constant is a data in which meaning remains unchanged through out the program.

Data encapsulation and inheritance are the two features of OOP.

III. Answer any Five of the following Question. Each question carries three marks: (5 × 3 = 15)

Question 19.
Discuss the characteristics of a computer in detail, (any three)
Answer:
The main characteristics of a computer are:
Computers are fast in doing calculations. The speed of the computer is measured in terms of million instruction per second (MIPS).
1. Storage Capacity:
Computers come with large amount of memory. They can hold lot of data. Computers can show a particular piece of information from large amount of data in a short time.

2. Diligence:
After doing work for sometime, humans become tired but computers do not become tired. They work continuously. In fact, some computers which control telephone exchanges are never stopped. This is called diligence.

3. Accuracy:
The results that the computers produce are accurate provided data and programs are reliable.

2. Batch operating system:
In a batch processing operating system interaction between the user and processor is limited or there is no interaction at all during the execution of work. Data and programs that need to be processed are bundled and collected as a ‘batch’ and •
executed together. For example, IBM OS/2.

Question 22.
Draw the flowchart to find area and circumference of a circle.
Answer: 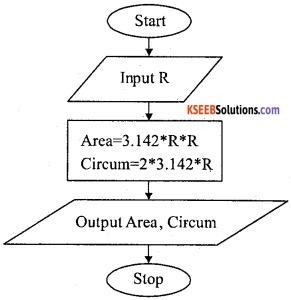 Question 24.
Explain the cascading of input and output with suitable example.
Answer:
The cascading is a way to extract/insert multiple values from/into more than one variable using one cin/cout statement. The multiple use of << or >> in a one statement is known of cascading.

Question 26.
Explain the process of the creation of a structure in C++ with an example.
Answer:

is the reserved or keyword used in structure definition.
<structure-tag>: Is the name given by the programmer and used to identify the structure in future re-definitions. They are used to declare structure variables.
<data-type>: Any valid data type in ‘C’
< member variable 1…4>: are names of the variables.
<structure-variable-name 1 ..2>: It is used to access the members of the structure 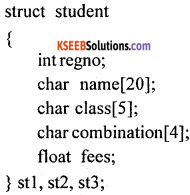 IV. Answer any seven of the following questions. Each question carries Five marks: (7 × 5 = 35)

1. The first computers used vacuum tubes for electronic circuitry and magnetic drums for memory. They were very expensive to operate and the power consumption was high, generated a lot of heat, which was often the cause of malfunctions.

2. First generation computers were communicated through machine language to perform operations, and they could only solve one problem at a time.

3. Input was based on punched cards and paper tape, and output was displayed on printouts.

1. In the second generation computers, symbolic or assembly languages were used. High-level programming languages were also in use at this time, such as early versions of COBOL and FORTRAN. Their memory consisted of magnetic core technology.

2. Second-generation computers still relied on punched cards for input and printouts for output.

Answer:
1. Binary Coded Decimal (BCD) code:
In this code each decimal digit is represented by a 4-bit binary number. BCD is a way to express each of the decimal digits with a binary code. In the BCD, with four bits we can represent sixteen numbers (0000 to 1111). But in BCD code only first ten of these are used (0000 to 1001). The remaining six code combinations i.e. 1010 to 1111 are invalid in BCD.

2. EBCDIC:
EBCDIC (Extended Binary Coded Decimal Interchange Code is a binary code for alphabetic and numeric characters that IBM developed for its larger operating systems. In an EBCDIC file, each alphabetic or numeric character is represented with an 8-bit binary number. 256 possible characters (letters of the alphabet, numerals, and special characters) are defined.

3. ASCII code:
ASCII (American Standard Code for Information Interchange) is the most widely used coding system to represent data. ASCII is used on many personal computers and minicomputers. ASCII is a 7-bit code that permits 27 = 128 distinct characters.

The 128 different combinations that can be represented in 7 bits are plenty to allow for all the letters, numbers and special symbols. An eight bit was added. This allowed extra 128 characters to be represented. The extra 128 combinations are used for symbols such as Ç, ü, è, ©, ®, Æ, etc.

Question 29.
Explain the General structure of C++ program with an example.
Answer:

The various parts of the above program:

Question 30.
Write the differences between

1. if statement
2. if-else statement with an example for each. 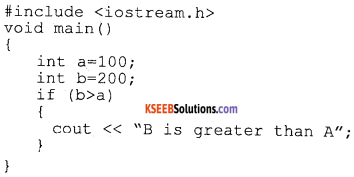 Result:
B is greater than A 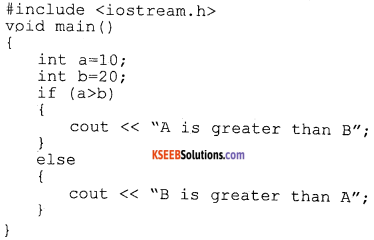 Result:
B is greater than A

In the above example the “if condition is true then the message ‘A’ is greater than B” is displayed and in the above program, condition is false so the code in the “else” part is executed.

Question 31.
Illustrate with the help of syntax, differences between While and Do-While looping statements in C++.
Answer:
The syntax of a while loop in C++ is:

do
{
statements;
} while (condition);

Accessing elements:
for (row = 0; row < 3; row++)
for (col = 0; col < 5; col++)
cout << matrix[row] [col];
The above nested looping statements can be used to access all the elements of two dimensional array where variable row and col are used to generate the row and columns index numbers.

Question 33.
Write a C++ program to find the area of a triangle given three sides.
Answer: 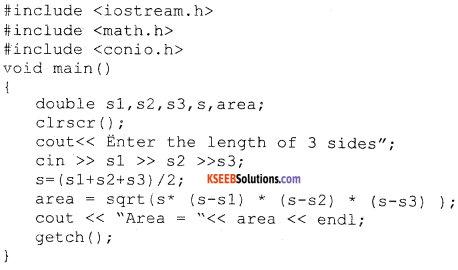 Question 34.
Explain the definition of the user-defined function and with the concept of arguments and return value with example.
Answer:
Functions with argument and with return value:
The calling function gives function call to the called function by passing arguments or values. Then the called function takes those values and performs the calculations and a return a value, that value will be sent back to the calling function. This is done using return statement. 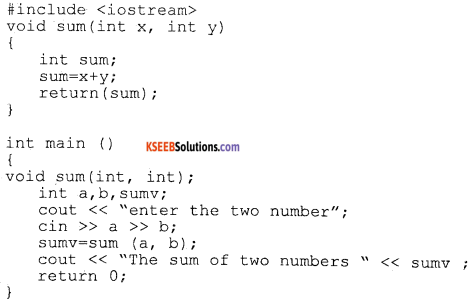 The statement return(sum); takes the control back along with the value present in the sum variable and assign it to the sumv variable in the calling function main(). This is how the function with argument and with return value works.

Question 35.
What is Mail Merge? Write the steps involved in creating mail merge documents.
Answer:
The mail merge helps to generate form letters by combining content of one document with content of address. In a situation where a letter is to be sent to address of many persons then mail merge is used. Mail Merge requires the main document and data source document.

2. Data Source:
Data Source is also called the Data File. It contains information that needs to be inserted in each page of main document. Normally it contains the address information.

3. Form Letter:
Form letter is the resultant document of the mail merge operations, which contains the copy of the main document along with each piece of information stored in the data file.

Question 37.
Explain the basic tags in HTML with examples (any five tags).
Answer:
The basic tags of HTML are <HTML>, <HEAD>, <TITLE>, and <BODY>.
Tags are instructions that are embedded directly into the text of the HTML document. <HTML>
<HEAD>
<TITLE> Welcome to HTML Page </TITLE>
</HEAD>
<BODY> <CENTER>
<H1> Welcome to the World of Web Paging </H1>
</CENTER>
</BODY>
</HTML>
A Web Page is marked by an opening HTML tag <HTML> and a closing </HTML> tag. The head section is defined with a starting <HEAD> tag and a closing </HEAD> tag. This section is usually contains a title for the Web Page. The text enclosed in the tags <TITLE> and </TITLE> will appear in the title bar of the Web Browser when it displays the page.

The <BODY> tag contains the entire information about the Web Page and its behavior. We can set up many options to indicate how our page must appear on the screen (like colour, location, etc..)

The body shown above contains instructions to display the following message in centre of the screen using <CENTER> tag.