Question 4.
What is constant?
Answer:
The program elements, which not change during the execution of a program, are known as constants.

Question 5.
Give the usage of end1 function.
Answer:
A manipulator is a C++ is used to control the formatting of output and/or input values. Manipulators can only be present in input/output statements. The end1 manipulator causes a newline character to be output end1 is defined in the header file and can be used as long as the header file has been included.

Question 8.
What are formal parameters?
Answer:
Formal arguments are the names of the arguments/parameters in the function header of called function.

Question 9.
What is header in word processor?
Answer:
A header is a special area a|the top of every page normally allocated in the top margin area.

Question 10.
Mention any one type of chart in ESS.
Answer:
The different categories of charts are column, line, pie, bar, xy scattered, etc.,

Question 14.
What are syntax and semantic errors?
Answer:
1. syntax error:
It refers to an error in the syntax of a sequence of characters or tokens that is intended to be written in a particular programming language.

Question 17.
Mention the use of isalpha() and toupper() character functions.
Answer:
1. isalpha():
Returns a non-zero value if the argument is a A-Z or a-z letters.
For example, isalpha(‘a’) output: 1 means true isalpha(‘5’) output: 0 means false

2. toupper( ):
It converts the lower case alphabet character to upper case.
For example, toupper(‘a’) output: A

III. Answer any Five of the following Questions. Each question carries three marks: (5 × 3 = 15)

Question 19.
What are impact printers? Briefly explain any one impact printer.
Answer:
Impact printers form characters or images by striking at a mechanism such as a print hammer or wheel against an inked ribbon, leaving an image on the paper.

1. Multi-tasking:
More than one program can be run at a time

2. Portability:
Only the kernel (<10%) is written in assembler tools for program development a wide range of support tools (debuggers, compilers). The system is written in high-level language making it easier to read, understand, changed and, therefore move to other machines.

3. Machine-independence:
The System hides the machine architecture from the user, making it easier to write applications that can run on micros, mins, and mainframes.

4. Multi-User Operations:
UNIX is a multi-user system designed to support a group of users simultaneously. The system allows for the sharing of processing power and peripheral resources, while at the same time providing excellent security features.

5. Hierarchical File System:
UNIX uses a hierarchical file structure to store information. This structure has the maximum flexibility in grouping information in a way that reflectsits natural state. It allows for easy maintenance and efficient implementation. 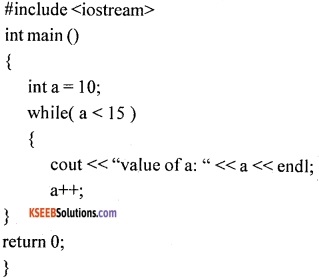 Question 23.
Explain any three mathematical functions in C++.
Answer:
1. a cos() function:
It is a mathematical function that returns the arc cosine value for the given argument. The argument value must be in the range -1 to 1, otherwise, a domain error is triggered.
Syntax: float acos ( float arg);

2. cos() function:
It is a mathematical function that returns the cosine Value for the given radians.
Syntax: float cos( float arg );

3. ceil() function:
It is a mathematical function that returns the smallest integer value that is not less than the specified number. In other words, it returns the Round-Up value of a given number.
Syntax: float ceil( float num);

4. exp() function:
It is a mathematical function that returns the natural logarithm base “e” raised to the power equal to the argument.
Syntax: float exp( float num);

5. sqrt() function:
It is a mathematical function that returns the square root of the given “num” value.
Syntax: float sqrt( float num);

Question 24.
What is the use of cin function? Write its syntax and example.
Answer:
1. Input Operator:
The statement cin>> num;
is an input statement and causes the program to wait for the user to type in a number. The operator >>is known as extraction or get from the operator. It takes the value from the keyboard and assigns it to the variable on its right.

Question 25.
What is array? Write a program segment to read and print the elements of one
dimensional array.
Answer:
Array is a group of similar elements that share a common name.
Using ‘for’ loop:
int age [10], i;
for(i=0; i<10; i++) { cin>>age[i];
}
for(i=0;i<10;i++)
cout<<age[i]; Question 26. Which operator is used to access the elements of a structure? Write its syntax and example. Answer: The accessing of data of the members is done by using the following format: structure variable.member name for example cin>>s1.rollno>>s1.age>>s1.name>>s1.marks;

IV. Answer any Seven of the following questions. Each question carries Five marks: (7 × 5 = 35)

Question 27.
Discuss the characteristics of a computer.
Answer:
1. Speed:
Computers are fast in doing calculations. The speed of the computer is measured in terms of No. of million instructions per second (MIPS).

2. Storage Capacity:
Computers come with a very large amount of memory space. They can hold a lot of data. Computers can extract a particular piece of information from a large amount of available data within a very short time.

3. Diligence:
After doing work for some time, humans become tired but computers do not become tired. They work continuously. In fact, Computers which control telephone exchanges, are never shut down. This is called diligence.

4. Accuracy:
The results that the computers produce are accurately provided that the input data and programs are reliable. 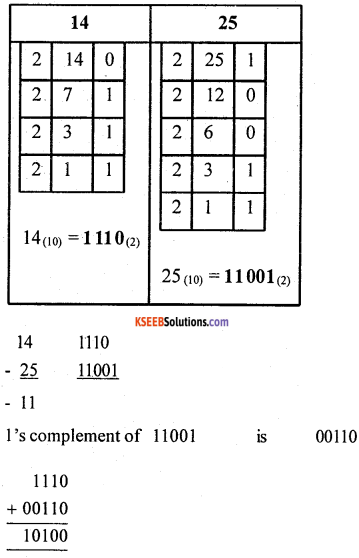 Question 29.
Write a flow chart to generate the Fibonacci series up to the given limit.
Answer: 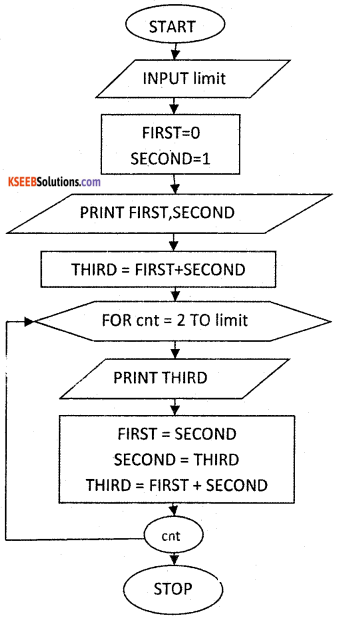 Question 30.
What are identifiers? Write the rules of naming identifiers in C++.
Answer:
The identifier is a sequence of characters taken from the C++ character set. The rules for the formation of an identifier are:

Question 31.
Explain switch statement with a suitable example in C++.
Answer:
‘ Switch’ statement compares the value of an expression against a list of integers or character constants. The list of constants are listed using the “case” statement along with a “break” statement to end the execution.
Example: 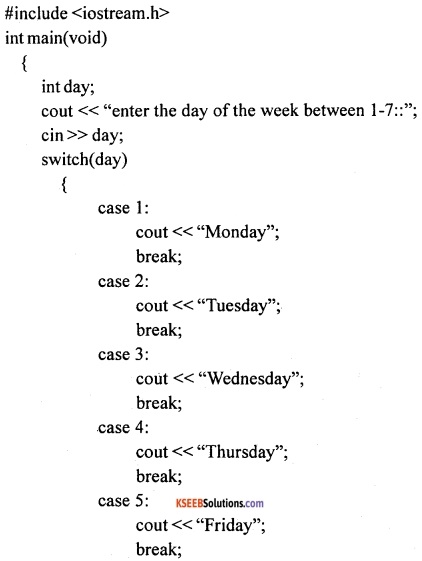 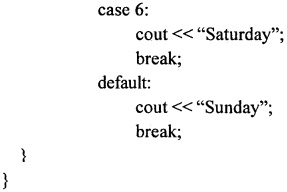 Result:
Enter the day of the week between 1-7::7
Sunday

In the above Control Structure example, the “switch” statement is used to find the day of the week from the integer input got from the user. The value present in the day is compared for equality with constants written in the word case. Since no equality is achieved in the above example (from 1 to 6), when 7 is entered default is selected and gives “Sunday” as a result.

Question 32.
Write an algorithm to check the given number is a power of 2. 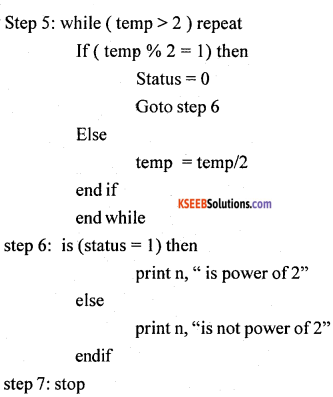 Question 34.
What is recursive function? Give the syntax and example for it.
Answer:
1. A function that calls itself directly or indirectly, again and again, is called recursive functions and the process is termed as recursion.

2. A function is called ‘recursive’ if a statement within the body of that function calls the same function.

In the above formula, the second part (n-1)! is calling the formula again.
Program: 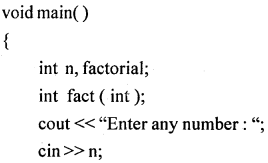 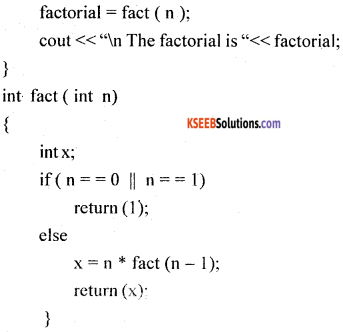 If ‘False’, control will execute the statement which is after ‘else’ x = n * fact ( n – 1);. here a function call is given to fact (n-1) with the parameter (n-1). Now the calling function is fact() and called function is also fact( ). The recursion ends when value of ‘n’ is 1 then the statement return (1) is initiated.

Question 35.
What is a spread sheet? Explain any four formatting options in ESS.
Answer:
A spread sheet is a document which is divided into rows and columns to store data such as items of an inventory, income, and expenses, salary statement, etc.

1. email:
It is a system for exchanging written, voice and video messages through a computer network. Some uses of email are as follows;

2. Voice Mail:
Voice mail messages are stored on hard disk drives, a media generally used by computers. Messages are recorded in digitized from the natural human voice. To retrieve messages, a user calls the system from any phone, logs on, and their messages can be retrieved immediately.

3. Chat:
It is an online communication between two users, through a computer on the internet. Once a chat has been initiated, either user can enter text by typing on the keyboard and the entered text will appear on the other user’s monitor. Most networks and online services offer a chat facility.

4. Bulletin Board:
It is an electronic message center where people can post public messages, messages are placed on the computer so people can leave them for other people to read and see and erase when the need is oyen it is used, For example, to advertise things to buy or sell, announce events, or provide information.

5. FTP:
It is a standard network protocol used to exchange and manipulate files over a TCP/ IP based network, such as the Internet. FTP is most commonly used to download a file from a server using the Internet or to upload a file to a server.

6. Telnet:
Telnet stands for ‘telecommunications network’, and was built to be a form of remote control to manage mainframe computers from distant terminals. Telnet is a text-only protocol, and to user cannot see graphics or fancy images while working with Telnet, nor will they be able to transfer files with Telnet. Telnet is used to communicate with other computers and machines in a text-based manner.