Question 1.
Define problem-solving.
Answer:
It is the process of expressing the solution of a specific problem, in terms of simple operations that can be understood by the computer.

Question 6.
Define an algorithm.
Answer:
An algorithm is a “step by step procedure to solve a given problem infinite number of steps”.

Question 7.
Define the flowchart.
Answer:
A flowchart is a pictorial or graphical representation of a solution to any problem.

Question 8.
How are flowcharts classified?
Answer:
Flowcharts are classified as system flowchart and program flowchart.

Question 9.
What is a pseudo code?
Answer:
Pseudo code is structured English that consists of short, English phrases used to explain specific tasks within a program’s algorithm.

Question 10.
Define coding.
Answer:
The process of translating the algorithmic solution or flowchart solution into a set of instructions in a programming language is called as coding.

Question 11.
What is testing?
Answer:
It is the process of checking the program logic, by providing selected sample data and observing the output for correctness.

Question 13.
What is the function of compiler?
Answer:
It is a translator software which converts source program into its equivalent machine language object program.

Question 16.
What is syntax error?
Answer:
It refers to an error in the syntax of a sequence of characters or tokens that is intended to be written in a particular programming language.

Question 17.
What are semantic errors?
Answer:
An error, which occurs due to the incorrect logic and a solution is called a semantic error.

Question 22.
Define selection.
Answer:
It is the process of selecting a certain set of statements based on a requirement for execution.

Question 23.
Define iteration.
Answer:
It is the process of repeating the execution of a certain set of statements again and again until a requirement is satisfied.

Question 30.
What is bottom-up design?
Answer:
It is the process of beginning design at the lowest level modules or subsystems and progressing upwards to the design of the main module.

Question 31.
What is structured programming?
Answer:
It is an easy and efficient method of representing a solution to a given problem using sequence, selection and iteration control.

Question 32.
What is a modular design technique?
Answer:
In this technique, a given problem is divided into a number of self-contained independent program segments. Each program segment is called a ‘module’ and a module can be called for in another program or in another module.

Question 2.
Which activity is represented by a rectangle and a rhombus symbol in the flowchart?
Answer:

Question 5.
Give the general form of a simple if statement.
Answer:
If (test condition) then
Statement 1

Question 6.
Give the general form of if-else statement.
Answer:
If (test condition) then
Statement;
Else
Statement;

Question 11.
Give the list of statements that can be used in structured programming.
Answer:

Question 12.
Give the list of statements that cannot be used in structured programming.
Answer:

5. Debugging:
It is the process of detecting and correcting the errors in the program. This stage is also referred to as verification.

6. Program Documentation:
It is a reference material that contains details about a program and functions of different programs of software. Documentation helps other users to understand the program and use it conveniently more effectively.

Question 3. What are the advantages and disadvantages of an algorithm?
Answer:
Advantages:

Question 5.
What are the advantages and disadvantages of a flowchart?
Answer:
Advantages:

Question 6.
Write a note on program errors.
Answer:
The different program errors are as follows;
1. Syntax error:
An error occurs when there is a violation of the grammatical rules of a programming language’s instructions. It happens at the time of compilation. Such errors need to be rectified before proceeding further.

3. Runtime Errors:
occur at run-time. Such an error causes a program to end abruptly or even cause system shut-down. Such errors are hard to detect and are known as ‘Bugs’.

4. Logical Error:
It may happen that a program contains no syntax or run-time errors but still, it doesn’t produce the correct output. It is because the developer has not understood the problem statement properly. These errors are hard to detect as well. It may need the algorithm to be modified in the design phase and changing sources code. 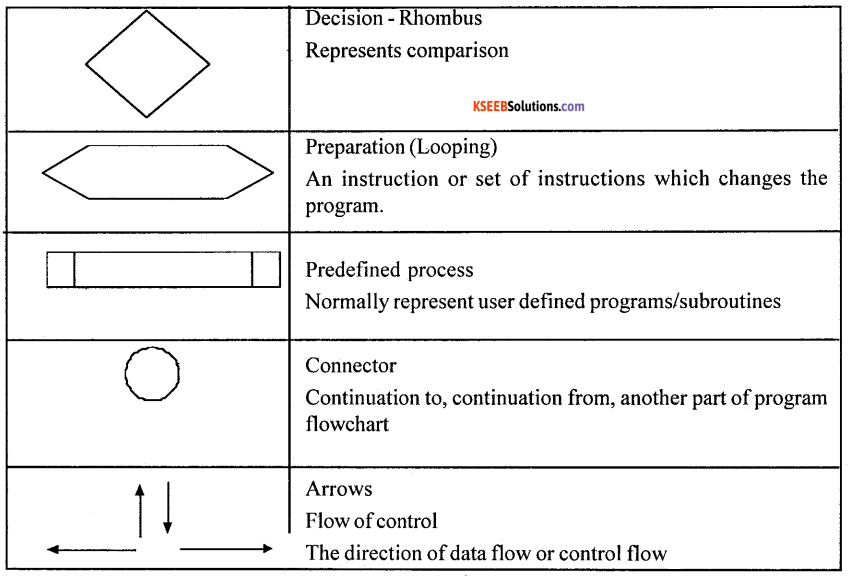 Question 8.
Explain the top-down approach in brief.
Answer:
Top-Down Approach:
It is based on a concept called divide and conquer. A given problem is solved by breaking it down into smaller manageable parts called modules. Hence it is also called as stepwise refinement. The subprograms are further divided into still smaller subproblems. Finally, the subproblems are solved individually, and all these give the solution to the overall problem.