I. Answer the following questions in a word, a phrase or a sentence each:

Question 1.
What did Mara do when they found the creeper?
Answer:
Mara tied the creeper to the nearby tree.

Question 3.
What surprised the white man?
Ans.
The white man was surprised at the leaf which cured the injured hand of Mara within a short period.

Question 6.
What did Mara’s wife find on opening the packet of meat?
Answer:
Only the leaves.

Question 7.
What happened when the milk was mixed with the juice of the creeper’s leaves?
Answer:
The milk became firm and rubbery

Around a Medicinal Creeper Additional Question and Answer

II. Answer the following questions in a paragraph each:

Question 1.
How long did it take the narrator to learn the facts about the medicinal creeper? What does it signify?
Answer:
The Narrator was a good friend of Mara. He was told several unbelievable stories by Mara. But the narrator did not believe him and assumed that they were all cock and bull stories. But when he heard of Appanna’s account about a herb that if it was squeezed the milk became hard, he wanted to check it. So he plucked some leaves from the creeper and took them to his friend Chandra, a pathologist.

He told Chandra what he had heard about that plant. They decided to conduct the experiment and brought a litre of milk and put those leaves in the milk and mixed with mixer and poured into a vessel. After a few minutes the milk became firm and rubbery. So he came to believe in and learn the facts about the medicinal creeper.

It signifies that the narrator did not believe until it came from his own experience. Most of the educated ones become cynics and sceptics about the uneducated’s stories about medicinal creepers.

Question 2.
What does the incident of Mara’s wife throwing the leaves into the fire tell us about Indians in general?
Answer:
Once Mara and his friend laid a trap and caught a barking deer. As they had to divide it equally between them, they took it near to the stream and divided the meat. They wrapped their portions in some leaves and brought them home.

In Mara’s house they got ready to cook, but when Mara opened the packet to take out the meat. It was a surprise as instead of the meat, there was a live wild buck! when it saw Mara, it jumped up and ran out of his house.

When Mara was trying to catch it, as usual, Mara’s wife ignorantly took the leaves and threw them into the fire. This incident shows that Indians do not think of what happened and why? But they simply go according to the situations and never turn the circumstances to their advantage. This is the big weakness of Indians.

Question 3.
How was Krishna cured of his illness?
Answer:
Krishna was suffering from piles and met the narrator to get some help. But narrator only helped him with some money which was not enough for the treatment. But Krishna knew a Malayali Sadhu. This godman had treated Krishna on an earlier occasion when Krishna had smarted developing boils all over his body.

The narrator understood that those were the leaves which Mara and Appanna had tied to the nearest tree. Narrator took him to the plant and dug quite a bit to get the tuber. Krishna ground this root with milk and drank. In this way he was cured of piles within five days.

Question 1.
Do you think that the author is suggesting that Indian herbal medicine is better/safer than allopathic medicine? Support your view.
Answer:
India is rich in herbal medicine but the tragedy is modem man does not know the use of all those herbs. Instead, he completely depends on allopathic medicine. In this story, the author is suggesting the effectiveness of herbal medicine with a few’ unbelievable stories. Now-a-days modem man thoroughly neglects the uses of trees and plants and forgets the ayurvedic treatment. Infact ayurvedic is a more powerful treatment with no side effects. Allopathy has a lot of side effects to the patient and moreover, it is costly.

But modern man due to his status and unawareness of ayurvedic advantages depends on allopathy. He has completely lost his faith in traditional medicine. A good example is, that the father of ayurvedic medicine was an Indian named “Bodhi” who had written a book on ayurvedic medicine, but the irony is that Indians do not even know his name, whereas in China he is famous.

Today, it is the responsibility of every Indian to preserve every ayurvedic herbal and to use them. If it is practiced in homes, no Indian will get disease and the future of India could be free of diseases forever.

Question 2.
What has made the modern man lose the knowledge of traditional medicine? Do you think Ayurveda will make a comeback in a successful way?
or

Question 3.
“Our natural resources are our vital resources”. Explain the statement in the light of several developmental projects that are being promoted today.
Answer:
In the present story, we realise the importance of natural resources such as plants and their medicinal value. However, when we speak of developmental projects, they are directed towards technology and allopathic medicines. Only a few measures are taken to create awareness

among people about the immense potential of Ayurvedic medicine. In the name of development,
we are losing.a lot of natural resources such as land and trees towards utility of space for
construction purposes.

While doing so, we are forgetting the key point – the natural resources such as trees that bring rain and prove as starting materials for making medicine. Also through development, we are infact giving rise to more diseases. The atmosphere that we had in

historic times was far healthier and safer than the atmosphere we breath in today. Thus,
whatever development we are aiming for, should primarily revolve around the lines of conserving
our natural resources and its utilization.

I. A note on spelling

Many words are spelt differently in British and American English.

Prefixes added to the beginning of a root word while suffixes are ad the essay, words that are formed by adding either prefix or suffix or both. 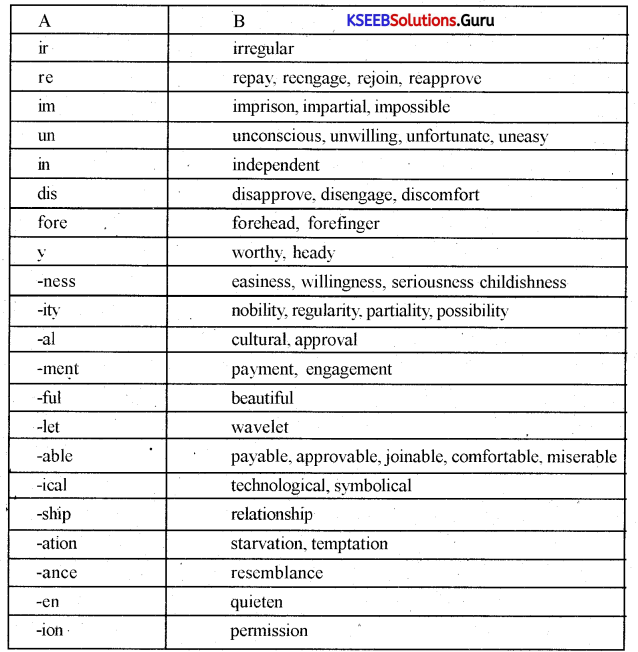