You can Download Chapter 7 Biosphere Questions and Answers, Notes, 1st PUC Geography Question Bank with Answers Karnataka State Board Solutions help you to revise complete Syllabus and score more marks in your examinations.

Question 2.
What is Environment? (T.B.Qn)
Answer:
The whole sum of surrounding external conditions within which an organism, a community or an object exists is called ‘Environment.

Question 4.
What is deforestation?
Answer:
It refers to removal or destruction of the forest cover of an area.

Question 5.
What is Photo synthesis?
Answer:
The conversion of water and carbon dioxide by plants into glucose and oxygen light is used as an energy source.

Question 6.
Define Ecology. (T.B.Qn)
Answer:
Ecology is the science of the relationship between living organism and their Surroundings.

Question 7.
Who used the term of ‘Eco system’ in the First time?
Answer:
A.GTransley in 1935

Question 8.
Where the Earth summit was held ?
Answer:
Rio-de-janerio

Question 9.
What do you mean by Species?
Answer:
A category used in the classification of organisms that consist of a group of individuals that can breed among themselves and produce offspring.

Question 10.
What is food chain?
Answer:
Food chain is an idealized pattern of flow of energy in a natural eco system.

Question 12.
What is Biomes? (T.B.Qn)
Answer:
A distinct group of life forms and the environment in which they are found is called Biomes.

Question 14.
What is Tundra biome?
Answer:
It refers to small plants that can grow quickly during a short warm to cool summer season, in the low temperature and high latitudinal areas.

Question 15.
What are Heterotrophic?
Answer:
These organisms are dependent upon other organisms for food. It consists of consumers and decomposers.

Question 16.
What is deforestation?
Answer:
It refers to removal or destruction of the forest cover of an area.

Question 17.
What is Biomagnifications?
Answer:
The phenomenon by which toxic chemical get concentrated with the increasing tropic levels is known as biomagnifications.

Question 18.
Define the term Biodiversity. (T.B.Q)
Answer:
The varied range of flora and fauna found within a specified geographic region is called ‘Biodiversity’:

Question 20.
Define Species.
Answer:
A group subordinate to a genus and containing individuals agreeing in some common attributes and called by a common names.

Question 21.
Define Endemic species.
Answer:
Endemism is the ecological state of being unique to a particular geographic location such as a specific island, habitat type or nation.

Question 4.
What are Autotrophs? (T.B.Qn)
Answer:
The self producers of food in the ecosystem are together known as the autotrophic component. They produced food with the Photosynthesis process.

Question 6.
What is ‘Ecological Balance’? (T.B.Qn)
Answer:
It refers to the proper balance between the different organisms and their physical environment in the biosphere.

Question 8.
What is Aquatic biome?
Answer:
Aquatic regions house numerous species of plants and animals, both large and small. This is where life began billions of years ago. Without water, most life forms would be unable to sustain themselves and the Earth would be a barren, desert-like place. Ponds, lakes, rivers, wetlands and oceans are sources of aquatic biomes.

Question 10.
What are natural cycles?
Answer:
The ecological balance in a ecosystem is maintained through innumerable natural cycles. The cyclic processes are similar to food chain or nutrient cycle through which energy flows. Important natural cycles are carbon cycle, nitrogen cycle, oxygen cycle, hydrogen cycle and hydrological cycle.

Question 11.
What is Biogeochemical Cycle?
Answer:
The cyclic movement of elements of the biosphere between living organism (the biotic phase) and their non-living (a biotic) surroundings (e.g. rocks, water, air etc.) is termed, ‘biogcochemical Cycle.

Question 12.
What is Nitrogen cycle?
Answer:
It is an important constituent of tissues of living organisms and its primary reservoir is atmosphere. Main processes involved in the nitrogen cycle are biological and chemical fixation of nitrogen, denitrification, etc.

Question 13.
State the features of Genetic biodiversity. (T.B.Q)
Answer:
It refers to the variation of genes within the species and variation of individual organisms having certain similarities in their physical characteristics called species. Human beings genetically belong to the homo-sapiens group and also differ in their characteristics such as height, color, hair, physical appearance etc.

Question 15.
What are the causes for the loss of biodiversity?
Answer:
Many activities of man have resulted in the Biodiversity loss.

a. Deforestation: Man clears the forests in Mountain regions to grow food and to build houses for himself. This reckless deforestation in hilly regions is one of the main causes of ecological imbalance.

Question 2.
Briefly explain the Biomes. (T.B.Q)
Answer:
A distinct group of life forms and the environment in which they are found is called ‘Biomes’. In other words, Biome is a plant and animal community that covers a large geographical area. On the basis of the dominant life form, six major biomes are identified.

b. Savanna biome: It is the transitional biome between the forest biome and grassland biome. Savanna biome comprises of trees with grasses and herbs. It occupies areas of low and seasonal rainfall.

c. Grassland biome: in this biome grasses constitute the dominant vegetation. It is dominant in the moderate soil water deficit regions, semi-arid areas of dry tropical, sub-tropical and mid-latitude regions.

d. Desert biome: It includes organisms capable of surviving in moderate to severe water deficit for most of the year. In this region temperature may range from hot to cool. Most common plants found in this belt are xerophytes.

e. Tundra biome: It includes small plants that can grow quickly during a short warm to cool summer season, in the low temperature and high latitudinal areas.

f. Aquatic biome: Aquatic regions house numerous species of plants and animals, both large and small. This is where life began billions of years ago. Without water, most life forms would be unable to sustain themselves and the Earth would be a barren, desert-like place. Ponds, lakes, rivers, wetlands and oceans are sources of aquatic biomes.

Question 3.
Describe the main aspects and three levels of study of Biodiversity. (T.B.Q)
Answer:
The varied range of flora and fauna found within a specified geographic region is called ‘Biodiversity’. The study of biodiversity is deals at three levels.

b. Specific Diversity: The species diversity refers to the variety of species. It relates to the number of species in a defined area and it is measured through its richness, abundance and types. Some areas are more rich in species than others.’

Question 4.
What is Biodiversity? Explain the types and conservation of bio-diversity?
Answer:
Bio-diversity means the diversity of variety of world’s living organism. In other words, the variety of species both flora and fauna present in an area is known as “bio-diversity”. According to the world resource institute: bio-diversity is a variety of the world’s organism’s including their genetic diversity and the assemblage they form.

The earth is endowed with a rich variety of living organisms. About 3,50,000 species of plants and 30, 00,000 species of animals have been identified so fat. India is one of the twelve countries of the world very rich in bio-diversity. India has about 46,000piant species and 81,000 animal species.
Types of Bio-diversity: Bio-diversity can be classified into there types. They are :

b. Species diversity: Species diversity refers to the variety of species in a specific place or among a specific group of organisms. This is the most familiar type and is found in the tropical zone that in cooler areas. India is rich in bio-diversity/. This is due to its tropical location, varied relief features and climate.

The following steps may be taken for preserving biodiversity: 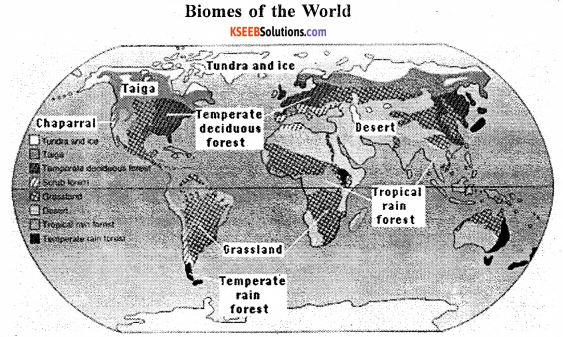