→ Microbes are present everywhere in soil water, air, inside our bodies and that of other animals and plants.

→ Dairy Products: A number of bacteria like Lactobacillus and some others commonly called Lactic Acid Bacteria (LAB) are used in the preparation of several dairy products.

Lactic acid causes coagulation of milk protein casein. Milk is converted into products like curd, yoghurt and cheese.
1. Curd: For making curd, milk is boiled and then the temperature of milk is brought to about 40°C by keeping it in a cool place. Now a small amount of curd (the innoculum or starter containing Lactobacillus acidophilus) is added to the milk. The fermentation process begins which converts milk sugar lactose into lactic acid. The acid coagulates milk protein by partially digesting it so that a thick concentrated curd is prepared. Curd is more nutritious than milk as it contains increased quantity of vitamin B12.

2. Yoghurt (= Yogurt): It is prepared by curdling milk with the help of Streptococcus thermophilus and Lactobacillus bulgaricans. The temperature is maintained at about 45°C for four hours.

3. Butter Milk: The acidulated liquid left after churning out butter from curd is butter milk.

4. Cheese: It is a protein rich nutritive preparation obtained after fermentation and curdling of milk. It consists of milk curd that has separated from liquid part or whey. Depending upon the water content present in milk / curd, cheese is of three types.

→ Bread: A small amount of baker’s yeast (Saccharomyces cerevisiae) is added to wheat flour at the time of its kneading. The kneaded flour or dough is kept for a few hours in a warm place. It results in swelling of the dough called leavening. The leavening is caused by the actions of three types of enzymes secreted by the yeast. These are amylase, maltase and zymase.

→ Microbes in Industrial Products: A number of industrial products valuable to human beings are produced with the help of microbes. The two common ones are alcoholic beverages and antibiotics.

→ Substrates containing starch juice from sugar cane or molasses or sugar beet are the common substrates for the production of ethanol. Ethanol is produced by continuous fermentation. The process is carried out in large fermenters. Fermentation is carried out at pH5, at a temperature of 35°C, but the cultures and culture conditions are different. Varieties of alcoholic drinks are made from the same microorganism using different substrates. Starch from barley grains is used in the preparation of beer. Wine is produced from the sugar in grapes.

Note: After fermentation is over, the cells are separated to get a biomass of yeast cells which are used as SCP (single Cell Protein) for animal feed.

→ Depending upon the raw material and the type of processing, the alcoholic drinks are of two types:

2. With Distillation: Whisky, brandy and rum are produced by distillation of the fermented broth.

(a) Antibiotics are chemical substances, which are produced by some microbes and can kill or retard the growth of other (disease causing) microbes.

(c) An antibiotic may be broad spectrum i.e., it can kill or destory a number of pathogens that belong to different groups with different structure and wall composition, or specific i.e., effective against only one type of pathogen.

(d) Most of them are produced by actinomycetes, specially the genus Streptomyces and filamentous fungi.

(e) Production of Antibiotics: For commerical production of antibiotics, the sterilized nutrient medium is inoculated with suitable strain of the micro-organism. The nutrient medium is provided with optimum pH, aeration, temperature, antifoaming agent and antibiotic pre-cursor. The microorganism grows and secretes antibiotic in the medium. When sufficient antibiotic has diffused into the medium, the microorganism is separated and the antibiotic is extracted from the medium by precipitation, absorption or solvent. It is purified, concentrated and bioassayed before packing.

Chemicals, Enzymes and other Bioactive Molecules:

2. Yeast (Saccharomyces cerevisiae) is used for the commercial production of ethanol.

3. Microbes are also used for production of enzymes. Lipases are used in detergent formulations and are helpful in removing oily stains from the laundry.

Bottled juices are clarified by the use of pectinases and proteases. Streptokinase produced by the bacterium streptococcus and modified by genetic engineering is used as a ‘clot buster’ for removing clots from the blood vessels of patients who have undergone myocardial infaction leading to heart attack.

4. Another bioactive molecule, cyclosporin A, that is used as an immunosuppressive agent in organ – transplant patients, is produced by the fungus Trichoderma polysporum.

5. Statins produced by the yeast Monascus pupureus have been commercialised as blood – cholesterol lowering agents. They act by competitively inhibiting the enzyme responsible for synthesis of cholesterol.

Microbes In Sewage Treatment: Sewage refers to the municipal waste water generated in cities and towns that contains human and animal excreta and other domestic wastes. Large quantities of waste water are generated everyday in cities and towns. Sewage contains large amount of organic matter and microbes. Many of the microbes present in sewages are pathogenic. Therefore, the sewage cannot be discharged into natural water bodies like rivers and streams directly.

Primary Treatment:
This step involves physical removal of floating and suspended solids from sewage through filtration and sedimentation. Initially, floating debris is removed through sequential fi Iteration. The filtrate is kept in large open settling tanks where grit (sand, silt and small pebbles) are removed by sedimentation. Sometimes, alum or iron sulphate is added for flocculation and settling down of solids. The sediment is called primary sludge, while the supernatant is called effluent. The primary sludge is subjected to composting or land fill. The effluent from the primary settling tank is taken for secondary treatment.

Secondary treatment or Biological treatment:
The primary effluent is passed into large aeration tanks where it is constantly agitated mechanically and air is pumped into it. This allows vigorous growth of useful aerobic microbes into floes (masses of bacteria associated with fungal filaments to form mesh like structures). While growing, these microbes consume the major part of the organic matter in the effluent. This significantly reduces the BOD (biochemical oxygen demand) of the effluent.

BOD refers to the amount of the oxygen that would be consumed if all the organic matter in one litre of water were oxidised by bacteria. The sewage water is treated till the BOD is reduced. The BOD test measures the rate of uptake of oxygen by micro-organisms in a sample of water and thus, indirectly. BOD is a measure of the organic matter present in the water. The greater the BOD of waste water, more is its polluting potential.

Once the BOD of sewage or waste water is reduced significantly, the effluent is then passed into a settling tank where the bacterial ‘floes’ are allowed to sediment. This sediment is called activated sludge. A small part of the activated sludge is pumped back into the aeration tank to serve as the incolulum. The remaining major part of the sludge is pumped into large tanks called anaerobic sludge digesters. Here, other kinds of bacteria, which grow anaerobically, digest the bacteria and the fungi in the sludge. During this digestion, bacteria produce a mixture of gases such as methane, hydrogen sulphide and carbon dioxide. These gases form biogas and can be used as a source of energy as it is inflammable.

The effluent from the secondary treatment plant is generally released into natural water bodies like rivers and streams.

Note River action plan: The ministry of environment and forests has initiated Ganga Action plan and Yamuna Action Plan to save these major rivers of our country from pollution. Under these plans, it is proposed to build a large number of sewage treatment plants so that only treated sewage may be discharged in the rivers.

Microbes in Production of Biogas:

Biogas is a mixture of gases (containting predominantly methane) produced by the microbial activity and which may be used as fuel. Microbes produce different types of gaseous end-products during growth and metabolism. The type of the gas produced depends upon the microbes and the organic substrates they utilise. 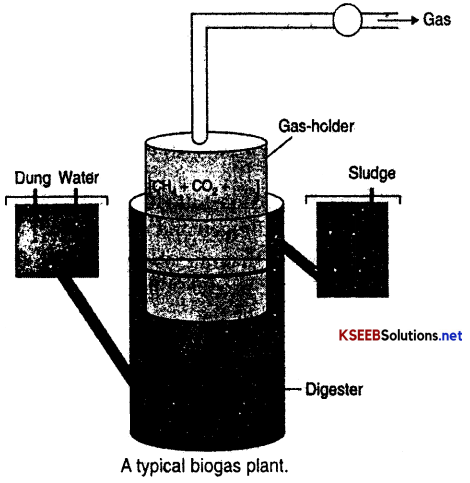 Note: In rumen, these bacteria help in the breakdown of cellulose and play an important role in the nutrition of cattle.

The biogas plant consists of a concrete tank (10-15 feet deep) in which bio-wastes are collected and a slurry of dung is fed. A floating cover is placed over the slurry, which keeps on rising as the gas is produced in the tank due to the microbial activity. The biogas plant has an outlet, which is connected to a pipe to supply biogas to nearby houses. The spent slurry is removed through another outlet and may be used as a fertiliser. Cattle dung is available in large quantities in rural areas where cattle are used for a variety of purposes. So, biogas plants are more often built in rural areas. The biogas thus produced is used for cooking and lighting.

→ Biocontrol refers to the use of biological methods for controlling plant diseases and pests. These methods rely on natural predation rather than on the introduced chemicals.

→ An organic gardener works to create a system where the insects (that are pests) are not eradicated, but are kept at manageable levels by a complex system of checks and balances within the ecosystem.

→ The beneficial predatory and parasitic insects which depend on these insect pests are able to survive; for example beetle is useful to get rid aphids and dragonflies control mosquitoes.

→ Bacillus thuringiensis is a bacterium whose spores are toxic to certain insect larvae and kill them, but is not harmful to other insects.

→ The toxin-producing genes of this bacterium are transferred (genetic engineering) into crop plants, which become resistant to insect pests; Bt cotton is an example.

→ Another biological control being developed for treatment/control of plant diseases in the fungus Trichoderma, which is free-living in the soil and root ecosystems and is effective against several plant pathogens.

→ Rhizobium forms a symbiotic association with the roots of leguminous plants. They develop the ability to fix nitrogen when they are present inside that root nodules.

Example: Frankia is associated symbiotically with the root nodules of several non-legume plants like Casuarina, Alnus.

Symbiotic nitrogen fixing cyanobacteria:
A number of cyanobacteria (blue green algae ) form symbiotic association with several plants, e.g., Lichens, hornworts, Azolla (fern), Cycas roots. Azolla is a small fast growing fern that* occurs floating on water. Anabaena azollae, (a cyanobacterium) lives in the cavities of Azolla (eaves. Azolla – Anabaena symbiotic association is of great importance to agriculture. The fern can grow in rice fields, because it does not interfere with the growth of crop plants.

Mycorrhiza:
Mycorrhiza (pl. mycorrhizae ) is a symbiotic association of certain fungi without the roots of certain seed bearing plants. Many members of the genus Glomus form mycorrhiza. The fungal symbiont in these associations absorbs phosphorus from soil and passes it to the plant. Plants having such associations show other benefits also, like

2. Endomycorrhiza: The fungus lives between and within the cells of the cortex of the roots: