1. Gene therapy:
The technique of curing genetic diseases by replacing the defective genes by normal genes is called gene therapy W.F. Anderson is regarded as the father of gene therapy.

(a) Somatic cell gene therapy: It is the replacement of the defective gene by a normal gene in somatic cells of the body. This therapy helps for treating the defective organs or tissues parts such as blood cells, liver cells, skin cells, lung cells etc. The genetic defects can be rectified only in that individual. The replaced gene is not transmitted to the next generation: The diseases like SCID [Severe combined immuno deficiency], Cystic fibrosis, Haemophilia, Cancer etc can be cured by somatic cell gene therapy.

Note: The first gene therapy experiment involved extraction of T-lymphocytes from the bone marrow of SCID patient. A healthy copy of ADA gene is introduced into these cells with the help of retrovirus as vector. These engineered cells are then injected into the bone marrow of the patient where those cells multiply. The altered cells would produce enough adenosine deaminase to relieve the disease symptoms. The lymphocytes have definite life span, the disease cannot be cured permanently. Repeated injections of modified lympheytes about three months for the patient are needed to control the disease.

(b) Germ line gene therapy: It is the replacement of the defective genes by normal genes in germ cells to rectify the genetic disorders. This includes gene therapy in sperms, eggs, zygotes or early embryos. Any change made in the germ cells by gene therapy will be transmitted to the offspring.

(a) Viral vector method [or ex vivo method]: In this method, retroviruses are employed as they have reverse transcriptase enzyme. In this process, normal genes are inserted into retrovirus and then such viruses are mixed with the target cells but outside the body. Here the desired gene is transferred to the chromosomes. These cells are then introduced into the patient where the desired genes multiply and produce the desired products, e.g.: SCID is cured by injecting a gene that produce ADA [Adenosine deaminase]

(b) Non viral methods [or in vivo method]: In this method the normal genes are directly delivered to target cejls but inside the body, e.g., Cystic fibrosis. 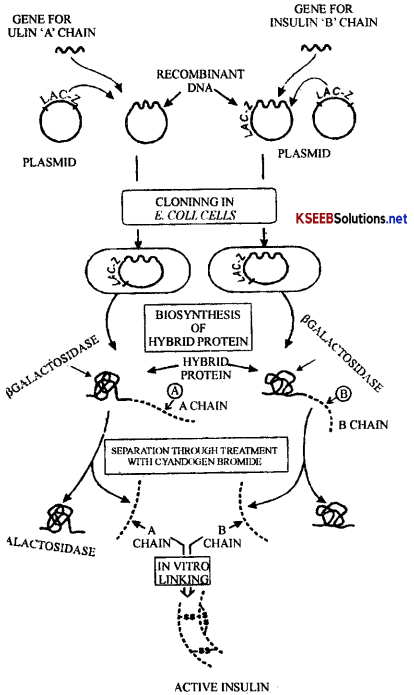 1. Obtaining the insulin gene: The human insulin gene can be obtained by collecting the mRNA for insulin protein from P cells of islets of Langerhans of pancreas. From this mRNA, complementary DNA [C-DNA] is synthesized by using reverse .transcriptase or RNA dependant DNA polymerase enzyme.

2. Insertion of insulin gene into plasmid to produce rDNA: The plasmid pBR 322 is taken and is cut with the help of restriction endonuclease [Hind HI], Now insulin gene or cDNA for insulin is inserted by the side of P galactosidase gene. The ends are joined by using DNA plasmid called recombinant plasmid or recombinant DNA.

3. Transfer of r-DNA or r plasmid into E.coli cells: A culture of E.coli cells are taken and mixed with r-DNAs or r-plasmids having gene, and the mixture is treated with cold calcium chloride [CaC12], After sometime, the temperature of the solution is suddenly raised to 42°C This makes the plasma membrane of the host cell more permeable. This results in the easy entry of r-DNA into the E.coli cells.

4. Selection or isolation and culture of E.coli cells having r-DNA:E.coli cells that have received r-DNA for insulin are isolated from the mixture by using the specific antibiotic in the media. Those E.coli cells that have received r-DNA will survive as the resistance gene REN and the desired gene is inserted in this place. Such cells DNA are selected with r-DNA by using replica plating technique. These selected E.coli cells are then cultured in bioreactors for large scale production. These cells produce insulin hormone in large quantities.

5. Extraction of insulin: The insulin synthesised in recembinant E.coli cells is human insulin. It contains B-galactosidase removed by treating with cyanogen bromide to form proinsulin. This proinsulin contains 3 chains designated as ‘A’ ‘B’ and ‘C’ chains. This proinsulin is inactive due to the ‘C’ chain which connects ‘A’ chain [21 aa] and ‘B’ chain [30aa], Chain ‘C’ is cut off by treating the proinsulin with trypsin. This process results in the formation of active human insulin or Humulin.

Application of biotechnology in Agriculture:

→ Agricultural practice is of three types :

→ The use of genetically modified plants has been useful in the following ways:

→ Cry proteins exist as inactive protoxins and get converted into active toxin when ingested by the insect, as the alkaline pH of the gut solubilises the crystals.

→ The activated toxin binds to the surface of epithelial cells of midgut and creates pores.

→ This causes swelling and lysis of cells leading to the death of the insect (larva).

→ The genes (cry genes) encoding this protein are isolated from the bacterium and incorporated into several crop plants like cotton, tomato, com, rice, soybean, etc.

→ The proteins encoded by the following cry genes control the corresponding pests.

(b) Protection Against Nematodes:
→ A nematode called Meloidegyne incognitia infects plants and reduces their yield.

→ The specific genes (in the form of cDNA) from the parasite are introduced into the plant using Agrobacterium as the vector.

→ Since these two RNAs are complementary, they form a double stranded RNA (ds RNA).

→ This silences the specific RNA of the nematode, by a process called RNA-interference. It prevents the translation of a specific mRNA (silencing).

→ Effective treatment of diseases require early diagnosis and understanding of their pathophysiology.

→ Early diagnosis of diseases is not possible by conventional techniques like serum and urine. analysis, sputum and stool analysis etc.

→ Modern techniques like rDNA, PCR, ELISA and RIA are used for early diagnosis.

→ Modern techniques can also help in the identification of mutated genes in humans.

→ Microinjection of desired genes into pronucleus of the fertilized egg.

→ Retroviral infection of fertilised eggs at 4 to 8 celled stages.

→ Genetic alterations of embryonic stem cells [ESC] and their reintroduction into the blastocyst.
Transgenic animals are useful in biological, biomedical and biotechnological researches especially in animal husbandary, dairy and pharmaceutical industries.

Note: Transgenic animals are used as bioreactors for mass production of drugs and proteins. It is called genefarming or molecular farming.
e.g.:

1. Normal physiology and development: Transgenic animals can be specifically designed to allow the study of how genes are regulated, and how they affect the normal functions of the body and its development.

2. Study of disease: Many transgenic animals are designed to increase our understanding of how genes contribute to the development of disease, e.g.: Cancer, cystic fibrosis, rheumatoid arthritis and Alzheimer’s.

4. Vaccine safety: Safety of vaccines must be confirmed before they are administered, e.g: Transgenic mice are being used to test the safety of the polio vaccine.

→ The manipulation of living organisms by the human race cannot go on unchecked, without regulation. Some ethical standards are required to evaluate the morality of all human activities, that might help or harm living organisms.

→ The Indian Government has set up organisations which are authorised to take decisions regarding the validity of genetic modifications and the safety of introducing genetically modified organisms for public services.

One such organisation is the Genetic Engineering Approval Committee (GEAC).

Bio patent:
It is an official right or approal from a government agency granting an inventor or establishment the sole monopoly to use or exploit for commercial benefits. The argument in favor of granting such bio patents was to stimulate research and economic growth. However, there are serious objections to such bio patents on ethical, political and scientific basis. Example: A patent has been granted for producing “all transgenic plants of brassica family”. Such broad patents provide monopoly control in the hands of a few multi nationals which could pose a great threat to global food security.

Biopiracy:
It is a term used to refer to the use of bio-resources by multinational companies and other organisations without proper authorisation from the countries and people concerned without compensatory payment.

e.g.: Basmati rice grown in India is distinct for its unique flavour and aroma, but an American company got patent rights on Basmati through the US patent and trademark office. The new variety of Basmati has been developed by this company by crossing an Indian variety with the semi-dwarf varieties.