→ There are various types of organisms present around us. Some are very small like bees, ants, insects and other are very large like elephant, banyan tree, etc.,, and some organisms are so small that they cannot be seen by naked eyes. This variety in the shape, form and nature of different organisms constitute biodiversity. The term ‘biodiversity’ refers to the totality of genes, species and ecosystems of a region.

→ The biodiversity therefore includes different types of genes, different types of organisms, species and ecosystems. The distribution of organisms is not even. It depends upon the habit and habitat of the organism. Therefore, biodiversity differs from place to place. Taking into consideration the total habitats of plants and animals, we can say that the living world abounds with enormous biodiversity. Loss of biodiversity would inhibit the evolutionary capability of biota to cope up with environmental changes.

→ The predicted number of total species on this earth varies from 5 to 50 million and average at 14 million, but only 1.7 million have been described till today and the distribution is highly uneven.

→ About 61 percent of the known species are insects, but, only 4650 species of mammals are known to us.

→ Information about bacteria, viruses, protists and archaea is just fragmentary. However, new species are being discovered faster than ever before due to the efforts of projects like Global Biodiversity.

Genetic diversity: The number and nature of genes determine the characters of the organisms. No two individuals have exactly the same genetic makeup. This difference among the genes of two different organisms is called genetic diversity.

Species diversity:
→ Species is a group of similar individuals, which are able to interbreed and produce fertile hybrids.

1. Alpha diversity: Alpha diversity refers to the diversity of organisms in the same community or habitat. (It is therefore intra-community diversity). This type of diversity is represented by a combination of species richness and species evenness.

2. Beta diversity: Species undergo frequent changes when the habitat or environmental conditions get changed. Due to this, a species in a given area may be replaced by some other species. The rate of replacement of species along a gradient of habitats or communities is called beta diversity (It is therefore inter-community diversity).

3. Gamma diversity: Diversity of the habitats over the total landscape or geographical area is called gamma diversity. Ecosystem diversity describes the number of niches, tropic levels and various ecological processes that support energy flow, food webs and the recycling of nutrients. It focuses on various biotic interactions, the role and function of keystone species.

Patterns of Biodiversity:
→ Biodiversity is not uniform throughout the world but varies with change in latitude and altitude.

→ Favourable environmental conditions favour speciation and make it possible for aTarger number of species to exist there; i.e., biodiversity is more in such areas than in others.

(a) Latitudinal Gradients:
→ Species diversity decreases from equator towards poles.

→ The tropics (between 23,5°N to 23.5°S) harbour more species than temperate and polar regions.

→ For example, Columbia situated near equator, has about 1400 species of birds, while New York (4ION) has 105 species, Greenland (7ION) has about 56 species and India (in the equator region) has 1200 species.

→ The number of species of vascular plants in tropics is about ten times more of that of temperate forests.

→ Three hypotheses have been proposed to explain the difference in biodiversity between tropical and temperate regions; they are as follows :
1. Speciation in general, is a function of time; while temperate regions were subjected to frequent glaciation in the past, the tropics have remained undisturbed and hence had evolved more species diversity.

3. There is more solar radiation available in the tropical region; this contributes directly to more productivity and indirectly to greater species diversity.

(b) Species-Area relationship:
→ Alexander Von Humboldt has observed that within a region, species richness increased with increasing explored area, but only upto a limit.

→ The relationship between species richness and area for a number of taxa like angiospermic plants, freshwater fishes and birds is found to be a rectangular hyperbola.

→ On a log scale, the relationship becomes linear (straight line) and is described by the equation, log S= log C + Z 1 OgA, where
S = Species Richness
Z = slope of the line (regression coefficient))
A = area and
C = y – intercept

→ Ecologists have found out that the value of Z-line ranges between 0.1 and 0.2 irrespective of the taxonomic group or the region.

→ But this analysis in very large areas like a continent, shows the slope to be much steeper and the Z value ranges between 0.6 and 1.2.

→ The Z value for frugivorous birds and mammals in the tropical forests is found to be 1.15. 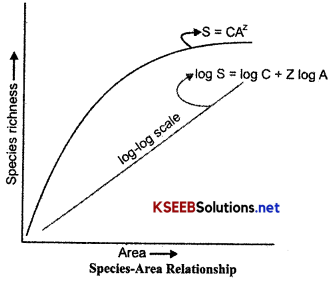 Mankind derives various benefits from the biological diversity existing around him. They are

(b) Drugs and Medicines: A number of drugs are based on plant products. Rosy periwinkle (Catharanthus roseus : Vincarosea) yields alkaloids (vincristine and vinblastine) which are useful for treatment of leukaemia. Morphine (Papaver somniferum for pains), quinine (from bark of Cinchona ledgeriana for malaria), taxel (from bark of Yew, Taxas brevifolia and Taxus baccatq for treating cancers) etc.

(d) Cultural benefit: Historically people have linked themselves with certain specific plants and animals. Majority of the Indian homes have specimens of Ocimum sanctum (Tulsi) growing in pots. Trees of Ficus religiosa (Peepal) and Prosopis cinerama (Khejri) are held sacred. They are planted and worshipped . Many birds and snakes are considered sacred and are worshipped.

(e) Ecological benefits or Ecosystem services: Forests and oceanic systems control climate and maintain the gaseous composition of the atmosphere. Oxygen is replenished through photosynthesis and carbon dioxide levels are lowered. Storage and retention of rain waters of aquifers and reservoirs and maintenance and purification of water regimes in soil and atmosphere is due to forests and vegetation. It helps in control of floods and soil erosion. The ecosystem services are valued at 16 – 54 trillion dollars per year.

The major causes of biodiversity losses are:

(a) Habitat loss and fragmentation : Habitats are destroyed by many human activities. It is the primary cause for loss of biodiversity of habitat. Human settlements, harbors, dams, reservoirs, roads, railway lines, industries, mines etc. , have reduced the natural habitats of wild life. Fragmentation develops barriers which limit potential of one species to colonize new areas. The species now becomes more vulnerable to extinction by means of fire, wind and predators. Deforestation leads to decrease in population of species and also reduces the area of free movement of wild animals, and this may lower their reproductive capacity. Environmental pollution has degraded many important habitats, resulting in decrease in life.

(b) Over-exploitation: Humans have always depended on nature for food and shelter, but when’ need’ turns to ‘greed’, it leads to overexploitation of natural resources. Extinctions of Steller’s cow, passenger pigeon were due to over exploitation by humans.

→ The IUCN (International Union of conservation of Nature and Natural Resources) now called WCN (World Conservation Union) maintains a document called Red List or Red Data Book of taxa that are facing the risk of extinction.

Biodiversity is very important for us and for the proper maintenance of nature. Therefore, it becomes necessary for us to protect our biodiversity. We also have a moral duty to look after our planet and pass it on in good health to our future generations. We should not deprive the future generations from the economic and aesthetic benefits that they can derive from biodiversity.

I. Insitu conservation strategies
→ The in situ strategies involve the protection of total ecosystems (i.e., conservation of species in their natural environment).

→ For this several protected areas, biosphere reserves, sacred forests and lakes have been recognized which include a group of typical ecosystems.

1. Protected area conservation:
→ These are areas of land and sea, which are especially dedicated to the protection and maintenance of biodiversity and natural and cultural resources. These are managed through legal or other effective means. Examples of protected areas are National Parks, and Wildlife Sanctuaries.

→ According to world conservation Monitoring Centre, there are 3 7,000 protected areas around the world. India has 58 \ protected areas (89 National Parks and 492 Wildlife Sanctuaries).

→ These cover about 4.7 per cent of the land surface, as against 10 per cent internationally suggested norm. The Jim Corbett National Park was the first National park established in India.

→ The concept of Biosphere Reserves was given in 1975 as a part of UNESCO’s Man and Biosphere Programme (MAB).

→ The core zone: It is the inner central part comprises of an undisturbed and legally protected ecosystem.

→ The Buffer zone: It lies in the middle and surrounds the core zone. It is managed to accommodate, a greater variety of resources and support educational activities and research.

→ The transition zone: It is the outermost part of the biosphere reserve. In this zone, there is active cooperation between the reserve management and the local people and activities like settlement, cropping, forestry, recreation, etc continue to take place. Till May 2002 there were 408 biosphere reserves located in 94 countries.

Scientific research and education: Biosphere reserves are very important from the educational point of view. They help researchers and students to monitor and study biodiversity very closely.

3. Sacred forests and sacred lakes:
→ These are the undisturbed areas, which are protected by tribal people due to some religious causes.

→ Sacred forests (pristine forests) are the most undisturbed forests, free from any human intervention.

→ Some water bodies (lakes) have also been declared sacred by the people and it has led to the protection of aquatic flora and fauna, e.g., Khecheopalri Lake In Sikkim.

Note: Hotspots: A hotspot region ‘is one “which contains at least 1,500 species of vascular plants as endemics, and has lost = 70% of its original native habitat.

In India, there are three hotspots namely, north-western and eastern Himalayas, Western Ghats.

a. Royal Botanical Garden Kew: It is the largest botanical garden of the world. It is located at Kew (England) and was founded in 1759 by Willium Aiton. It has about six million specimens of plants.

b. Museum of Natural History: It is located in Paris (France). It also contains about six million specimens of plant species.

c. New York Botanical Garden: It is located in New York (USA) and was founded in 1801. it contains about 405 million specimens of plants species.

d. British Museum of natural history: It is located in London. It contains more than 4 million plant specimens.

e. Indian Botanical Garden: It is situated in Kolkata, India. It is the biggest botanical garden of lndia. lt contains about 1.5 million plant specimens.

2. Zoological parks: Zoological parks and gardens are the protected and enclosed areas, which are, developed to provide shelter to wild animals. Main object of creating the zoological parks is to create among people an interest and curiosity for animals. Various types of animals are kept in a zoological park for their protection, exhibition and study purposes.

Zoological parks are mainly run by the central and state governments. However some Non-government organizations (N.G.Os) are also active in this direction. Zoological parks guard animals against their natural enemies and also against starvation. They are also given medical treatment and facilities.

Some important zoological parks of India are:

4. Gene or DNA banks: The germ plasm or genes (DNA) of important species can also be stored in gene or DNA banks. These banks help genetic engineers and plant and animal breeders to quickly obtain the genetic material of their choice.