You can Download Chapter 14 Ecosystem Questions and Answers, 2nd PUC Biology Question Bank with Answers, Karnataka State Board Solutions help you to revise complete Syllabus and score more marks in your examinations.

Question 1.
Fill in the blanks.

(a) Plants are called as because they fix carbon dioxide.
(b) In an ecosystem dominated by trees, the pyramid (of numbers) is type.
(c) In aquatic ecosystems, the limiting factor for the productivity is
(d) Common detritivores in our ecosystem are
(e) The major reservoir of carbon on earth is
Answer:
(a) Producers
(b) Spindle
(c) light
(d) Earthworms ants and mites
(e) Oceanic.

(b) Production and decomposition

2. Abiotic components:- They are factors and materials of the physical environment. The materials include inorganic nutrients and organic remains. The organic remains consists of human substances, carbohydrate, lipide, proteins etc. The abiotic materials are air, water and soil.

Question 8.
Define ecological pyramids and describe with examples, pyramids of number and biomass.
Ans:
Ecological pyramids They are the graphical representations of various ecological parameter at the successive trophic levels of food chains with producers at the base top carnivores at the apex and intermediate levels .in between. Quantity at each level is indicated by length of bar in the graph. The pyramids are therefore also called bar diagrams.

It is graphical representation of numerical strength of various populations in different trophic levels per unit area of an ecosystem with producers forming base intermediate levels forming intermediate tiers and apex formed by top carnivores length of bar at each trophic level is proportional to the number of individuals at this level. 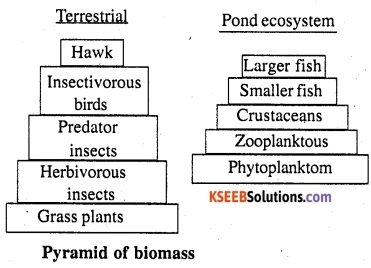 Pyramid of biomass
Biomass is the amount of living matter measured in terms of fresh or dry weight. Dry weight is preferred as it avoids seasonal variations in moisture content of biomass. 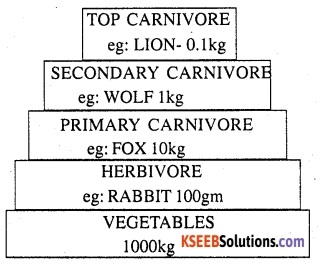 (1) Sunlight:- In tropical regions maximum sunlight is available. It reduces towards the pole. Therefore more photosynthesis and high productivity occurs in tropics.

(2) Temperature:- Temperate forest have lesser productivity as compared to tropical forest due to cold climate during winter. Alpine and arctic regions have very low productivity because of low temperature almost through out the year.

(3) Moisture:- Good rain and humidity increase productivity of the ecosystem with the fall in availability of water the productivity decreases.

(4) Nutrients:- A regular availability of nutrients is required for sustaining plant growth and hence the productivity of an ecosystem.Coral reefs and esturies are highly productive as the nutrient supply is rich.

5. Photosynthetic efficiency:- Some plants are photosynthetically more efficient in trapping sunlight than others. eg: Sugarcane.

(b) Leaching:- Part of soluble substances present in the fragmented and decomposing detritus get leached to upper layers of soil by percolating water.

(c) Catabolism:- It is carried out by saprotrophic bacteria. They secrete digestive enzymes over the fragmented detritus. The enzymes change the complex organic compounds into Simple compounds.

Catabolic action forms two types of products- humus and inorganic the process involved in formation of these products are respectively called humification and mineralisation.

Question 11.
Give an account of energy flow in an ecosystem.
Answer:
Energy flow:- The passage of energy through various trophic levels of an ecosystem is called energy flow. Their is no circulation of energy. Instead unidirectional flow of energy occurs in the ecosystem.

(2) Transfer to herbivores:- Herbivores get a part of net primary productivity. The remaining is changed into detritus which is a source of energy to decomposers. Herbivores waste a lot of food energy during ingestion about 30% food energy is used up by herbivores for their life activities and liberated as heated. The remaining is used in building biomass of herbivores. It is about 10% of productivity of producers. The transfer of about 10% of biomass energy from one tropic level to the next tropic level is called 10% law (ten percent law).

Detritus acted up on by decomposers and release the nutrients back into cycling pool. In stable ecosystems, over 80% of nutrient requirement of the biotic is met through internal nutrient cycling.

(iii) Out put of Nutrients:- It is a movement of nutrients out of an ecosystem. Out put reduces the availability of nutrients in the cycling pool. It occurs through soil erosion, run off water and economic out put like harvesting of crops or removal of wood from forest. Crop fields are always under negative nutrient budget.

Question 13.
Outline salient features of carbon cycling in an ecosystem.
Answer:
Carbon is the most abundant element as it occurs in every organic substances. It form 49% of the dry weight of organic matter. Carbon occurs as free carbon dioxide in atmosphere and dissolved as CO2 in hydrosphere. Carbon dioxide is being added to the cycling pool of atmosphere and hydrosphere through two processes, biological and non- biological 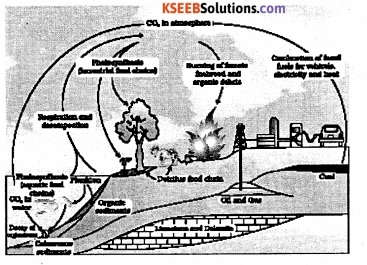 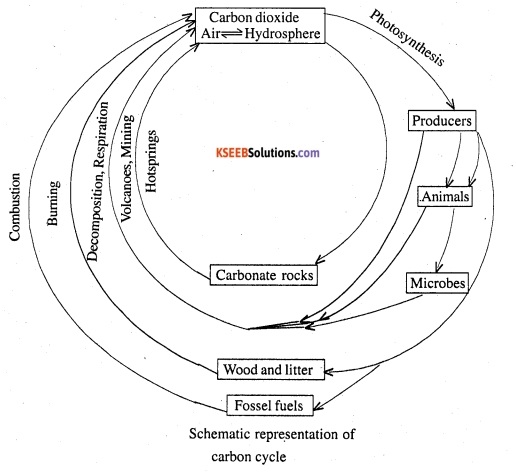 Question 1.
Define ecosystem.
Answer:
An ecosystem is a functional unit of nature, where living organisms (biotic) interact among themselves and also with the abiotic factors or their physical environment.

Question 3.
What is net primary productivity of an ecosystem. (CBSE Delhi 2005)
Ans:
It is the rate of energy stored or biomass accumulated by the producers. It depends up on rate of photosynthesis as well as respiration.

Question 4.
What PAR?
Answer:
The part of incident solar radiation that can be absorbed and used by plants autotrophs for photosynthesis, is called photosynthetically active radiation (PAR).

Question 7.
Why type of nutrition is shown by decomposers?
Answer:
Saprophytic nutrition.

Question 8.
What term is given to the inter connected food chain?
Answer:
Food-web.

Question 11.
What do you mean by ecological succession?
Answer:
It is the phenomenon of gradual and fourly predictable changes in the species composition of a given area leading ultimately to the establishment of a climax community.

Question 12.
Define the term “Sere1
Answer:
The entire sequence of communities that successively change and lead to the establishment of a climax community is called a sere.

Question 13.
Define the term ‘climax community”?
Answer:
The community that is in near equilibrium with the environment, and does not undergo much change and occupied a large area is called climax community.

Question 14.
What do you mean by ‘Pioneer species’?
Ans:
The species that invades a bare area and starts establishing a community is called pioneer species.

Question 16.
What is the structure and composition of a community expected to remain unchanged.
Answer:
Un disturbed climax community

Question 17.
In the pyramid of biomass given below, name 2 types of crops
(i) One which is supported and
(ii) One which supports. In which ecosystem such type of pyramids found.

Question 2.
Match the column A with any two of column B 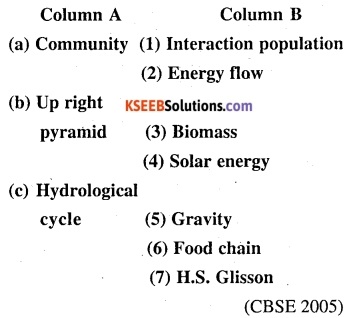 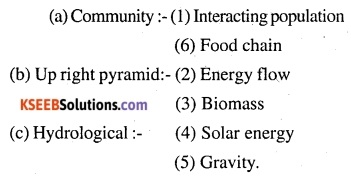 Question 6.
Define Productivity? How is it expressed?
Answer:
Productivity refers to the rate of biomass production.
It is expressed as g-2 yr-2 or (Keal m-2) yr-1

Question 10.
It is stated that the pyramid of energy is always upright. Justify (Delhi 2008)
Answer:

Question 17.
In the terrestrial ecosystem the detritus food chain (DFC) and the grazing good chain (GFC) become inter linked. Justify the above statement. What term is given to such interconnection? (HOTS)
Answer:

Question 1.
Describe the factors that control decomposition ?
Answer:
Decomposition is controlled by
(i) Chemical composition of detritus

(ii) Temperature and soil moisture, through their effects on the activities of microbes. 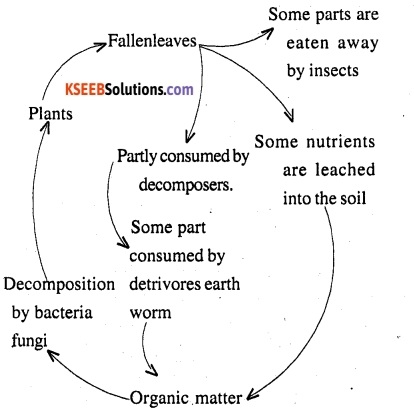 Question 3.
What is humus? Mention its properties.
Answer:
Humus is a dark coloured, amorphous substance produced by the process of humification during decomposition of detritus.
Properties of humus:-

(b) CO2 is added to the atmosphere in the following ways:

Question 2.
Explain the different steps in the process of decomposition.
Answer:

Question 3.
Describe the pond as an ecosystem.
Answer:

The abiotic components include

The biotic components include.