You can Download Chapter 5 Principles of Inheritance and Variation Questions and Answers, 2nd PUC Biology Question Bank with Answers, Karnataka State Board Solutions help you to revise complete Syllabus and score more marks in your examinations.

Question 2.
Differentiate between:-
(a) Dominance and Recessive.
Answer:

(b) Homozygous and Heterozygous.
Answer:

In a monohybrid cross:- 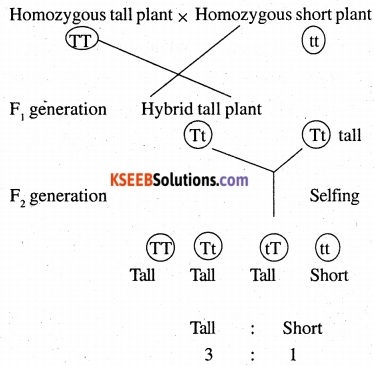 Question 5.
Define and design a test cross.
Answer:
Test cross: An organism showing dominant phenotype (genotype is to be determined.) from F2 is crossed with recessive parent instead of self-crossing. Progenies of such a cross can be analysed to predict genotype of test organism. Eg: Tall and short plant taken into experiment. From F2 generation, TT or Tt could be tall  I plant. Recessive parent will be tt. So,

Question 6.
Using a punnett square, workout distribution of phenotypic features in the F1 generation after cross between homozygous female and heterozygous male for single locus.
Answer: 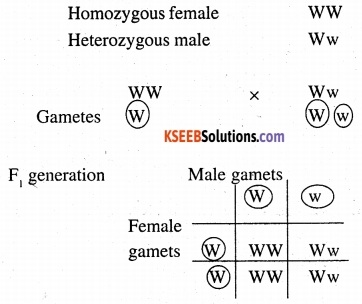 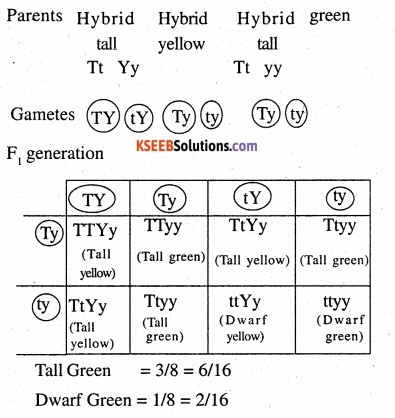 Question 8.
Two heterozygous plants are crossed. If 2 loci are linked what would the distribution of phenotypic features in F1 generation in dihybrid cross.
Answer: 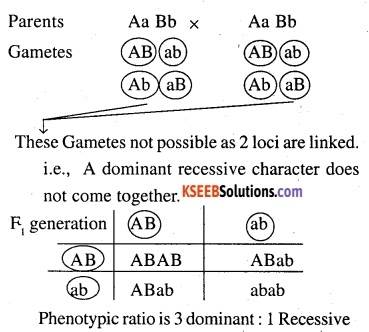 Question 9.
Mention the contributions of TH Morgan in Genetics.
Answer:
TH Morgan is a Genetist who got Nobel Prize.

Question 10.
What is pedigree analysis ? Suggest how such analysis can be useful.
Answer:
Pedigree analysis: Study of transmission of particular traits graphically over the present and the last few generation for finding out possibility of their occurrence in future generations. So, analysis of traits in a several generations of a family is called Pedigree Analysis.
Importance: 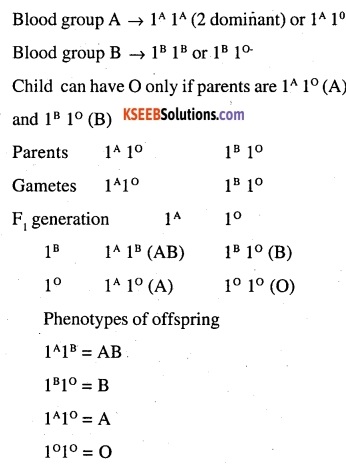 Question 12.
How is sex determined in human beings?
Answer:
In humans there are 23 pairs of chromosomes. 22 pairs of these chromosomes do not take part in sex determination called autosomes. The 23rd pair determines the sex of individual called allosome or sex chromosome. If it is XX then female, if XY then male. Presence of Y1 makes a person male. Human females produce only 1 type of gamete 22 + X. In male it could be 22 + X or 22+ Y. 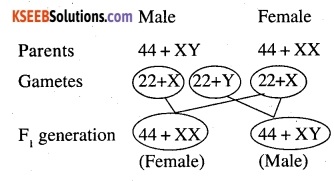 Question 13.
Explain the following terms with example
(a) Co-dominance
(b) Incomplete dominance
Answer:
(a) Co-dominance: Phenomenon of 2 different alleles of same gene lacking dominance – recessive relationship and expressing their effect simultaneously in heterozygote.
Eg: 1A and 1B alleles in AB blood group of humans.

(b) Incomplete dominance: Phenomenon of neither of 2 alleles of a gene being dominant over each other so that when both of them are present together, a new phenotype is formed which is somewhat intermediate between both of their independent expression. Eg: Flower colour is Snapdragon and 4’0 clock plant.

Question 14.
What is point mutation ? Give example.
Answer:
Point mutation: Gene mutation that occurs due to change in single base pair of DNA. It results in incorporation of different DNA. Eg: Valine instead of glutamic acid in [3 -peptide in sickle cell anaemia.]

Question 15.
Who had proposed chromosomal theory of inheritance ?
Answer:
Sutton and Boveri (1902)

Question 1.
Give the meaning of the term allele.
Answer:
It represents a pair of genes of 2 alter-natives of the same character and occupies the same position (locus) on the homologous chromosome. OR The various forms of genes are called alleles.

Question 2.
What is pleiotrophy? Give one example.
Answer:
A phenomenon where one gene controls more than one phenotypic characters of an organism. Eg: In Pisum sativum, a gene that regulates colour of flowers also regulates the colour of seed coat.

Question 3.
What is Genetics?
Answer:
The branch of biology that deals with the inheritance and variation of characters from parents to offspring.

Question 4.
What is variation in genetics?
Answer:
The degree by which the progeny differs from the parents in a character.

Question 5.
What term did Mendel use for what we now call the genes? [Hots]
Answer:
Factors or determination.

Question 6.
What is a true breeding line?
Answer:
It is one that has undergone continuous self pollination and shows the stable trait inheritance and expression of it for several generation.

Question 7.
Define Phenotype.
Answer:
The observable or external characteristic of an organism, constitute its phenotype.

Question 8.
Define genotype.
Answer:
The genetic constitution of an organism is called genotype.

Question 9.
What is monohybrid cross?
Answer:
The cross made between individuals of a species, considering the inheritance of the contrasting pair of a single character.

Question 10.
What is dihybrid cross?
Answer:
The cross made between individual of a species considering the inheritance of the contrasting pairs of 2 characters.

Question 12.
What is the importance of pedigree analysis?
Answer:
It reveals the ancestral history of an individual and its possible genotype for a trait.

Question 13.
Mendel observed 2 kinds of ratios, i.e., 3:1 and 1:2:1 in F2 generation in his experiments on garden pea. Name these two kinds of ratios respectively.
Answer:

Question 14.
What are.codominant alleles ? Give one Example.
Answer:
The genes of an allele morphes pair are not related as dominant or recessive but both are equally potent to express themselves in F1 hybrid. Eg: Blood group AB where alleles
IA and IB are codominant.

Question 15.
What is epistasis?
Answer:
It is the interaction between two different genes (non-allelic genes) where one gene masks the effect of another gene.

Question 16.
When a tall pea plant was self pollinated, one fourth of the progeny were dwarf. Give the genotype of all the parent + the dwarf progenies.
Answer:

Question 17.
‘Give the scientific name and the common name of plant in which incomplete dominance was first discovered.
Answer:
Four O’clock plant – Mirabilis jalapa.

Question 18.
Define the term heterozygous.
Answer:
It is an individual who possesses two different alleles of a character on its homologous chromosome.

Question 20.
Define the law of independent assortment of genes.
Answer:
The two genes of each character assort independently of the genes of other characters at the time of gamete formation and gets randomly rearranged in the offspring.

Question 21.
What are the glycoprotein found on the RBC’s of a person with blood group AB?
Answer:
Glycoprotein A and B are found.

Question 23.
What are complementary genes ?
Answer:
These are the two independent pairs of genes which interact to produce a trait together
but each dominant genes alone does not show its effect.

Question 24.
What is gene pool?
Answer:
It is the genotypes of all the individuals in a population.

Question 27.
Why ‘X’ chromosome is called as sex chromosome ?
Answer:
It involves in the sex determination of an individual.

Question 28.
Why is Drosophila (male) referred to as heterogametic ?
Answer:
A male drosophila produce 2 types of gametes i.e., X and Y. Therefore they are heterogametic.

Question 29.
Define heterogamety. Give an example.
Answer:
It is a phenomenon in which organisms produce 2 types of (more than one type) gametes. Eg: Human male, male drosophilla / female fowl.

Question 31.
Give the term for the factors which causes mutation.
Answer:
Mutagenes.

Question 33.
Name some diseases which can be avoided in the progeny through pedigree analysis of parents.
Answer:
Colour blindness, Tuberculosis, Turner’s syndrome.

Question 34.
Give the reason for Down’s syndrome.
Answer:
Trisomy of 21st chromosome.

Question 1.
Define test cross. What is its significance?
Answer:
It is the cross between an individual with dominant phenotype with an individual homozygous recessive for the trait. It is used to determine the genotype of an individual for any character trait.

Question 2.
What are multiple alleles ? Give an example.
Answer:
When a gene exist in more than 2 allelic form, the alleles are called multiple alleles.
Eg: The gene ‘I’ controls the human blood group. It exist in 3 different alleleic form i.e., IA IB and i.

Question 7.
Is not possible study the inheritance of traits in humans in the same way as in peas. Give 2 main reason for it and the alternative method used for such study.[Hots]
Answer:
Mendel’s laws are not applicable for human beings because:

Question 8.
What is back cross?
Answer:
When an intercross done between 2 genetically different parents, a hybrid is produced which may be homozygous or heterozygous. To determine the purity of parents and to test genotypes of F1 hybrid, a cross is made between F1, hybrid and of the parent. Such cross is known as backcross.

If the individuals are heterozygous, the progeny will show dominant phenotype and recessive phenotype in the ratio 1:1.

Question 12.
What is point mutation ? Give an example.
Answer:
The mutation that arises due to change in a single base pair of DNA, is known as point mutation. Eg: sickle cell anaemia.

Question 15.
What is haemophilia due to? What happens in this disorder?
Answer:
Haemophilia is due to a defective recessive allele located on the ‘X’ chromosome. In this disorder, a single protein which is involved in clotting of blood is affected. As a result, the individual bleeds even from a simple cut, that may become fatal.

Question 21.
List any 7 traits in garden pea which Mendel studied in his breeding
Answer: 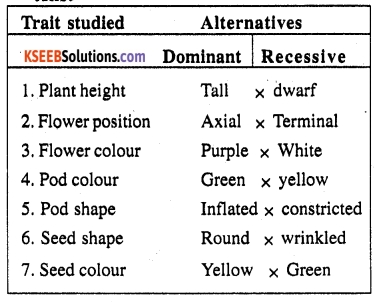 Question 22.
What are the reasons for success of Mendel’s experiment on pea plant.
Answer: 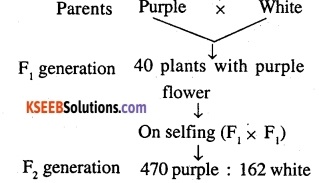 In F2 generation, purple and white coloured flowers were produced in the ratio 3:1. Here the parental character of white again reappeared in about one fourth of the progeny. This occurs due to segregation of genes in the gamete formation. This represents the law of segregation and monohybrid ratio.

(a) The mother’s genetype must be ‘bb’ as she is recessive for blue coloured eye.-The man is brown-eyed (dominant). Its possible genotype must be ‘Bb’ as he is procuring one of the recessive gene from his mother. 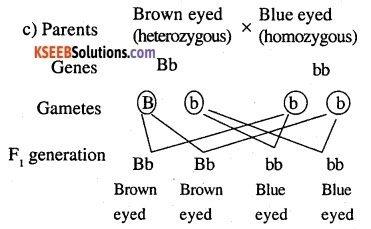 Question 25.
How do you relate dominance, co-dominance and incomplete dominance in the inheritance of character.
Answer:

Question 26.
Describe the XO- type of sex determination. [HOTS]
Answer:
XO – type of sex determination occurs in certain insects like grasshoppers. The males have only one X – chromosome and hence they have one chromosome less than that females. All the ova contains autosomes and one X chromosome. 50% of the sperm contains one X chromosome besides the autosomes, while 50% of sperm don’t have X – chromosomes. Sex of the individual is determined by the type of sperm fertilizing ovum. Egg fertilized by sperm having an X- chromosome developed into female. Egg fertilized by sperm having no chromosome develop into male.

Question 1.
What is incomplete dominance ? Describe with one example.
Answer:
When 2 parents are intercrossed with each other, the hybrid that produced doesn’t resemble either of the parents, but mid way between 2 parents. The phenomenon of incomplete dominance occurs in Four O’ clock plant (Mirabilis Jalopa) and Snapdragon (Antirrhinum Majus). A cross between red flowered (RR) and a white flowered (rr) plant yields the hybrid flowered (Rr) one which is of pink colour in F, generation.

The pink hybrids on crossing with each other give the usual Mendelian ratio 1 : 2 : 1 (one red : 2 pink : 1 white). In this the gene “R is not completely dominant over the allele ‘r’. The heterozygous Rr synthesises only half pigment, so they are pink in colour. 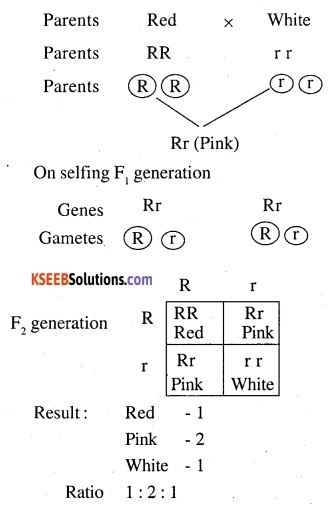 Question 2.
In Snapdragons, tall (DD) is dominant over dwarf (dd) and Red (RR) are incompletely dominant over white (rr), the hybrid being pink. A pure tall white is crossed to a pure dwarf red and F2 are self fertilized. Give the expected genotype and phenotype in F1 and F2 generations.
Answer: 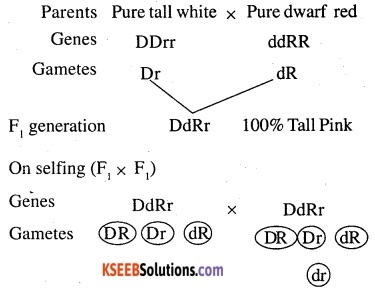 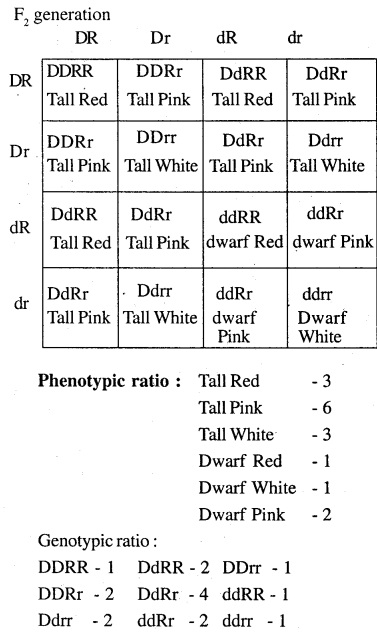 Question 4.
Study the Pedigree analysis chart and answer the question given below: [CBSE 2008]
Answer: 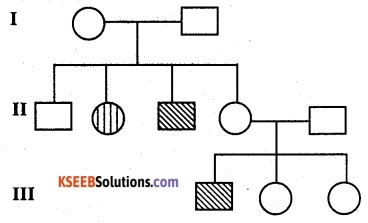 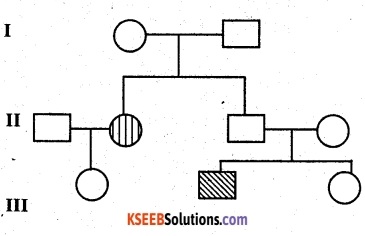 Question 6.
A girl baby has been reported to suffer from haemophilia. How is it possible ? Explain with the help of a cross.
Answer:
(a) Haemophilia is due to the presence of a recessive defective allele on X – chromosome.
(b) A female with XX – chromosome must be homozygous for the disease to appear.
(c) She must receive one of the alleles from her haemophilie father (XhY) and the other from her mother who is also an haemophilie or at least a carrier i.e. the heterozygous for the disease XXh. 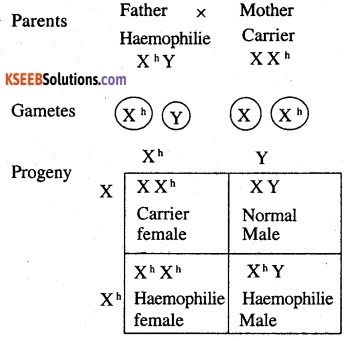