You can Download Chapter 6 Molecular Basis of Inheritance Questions and Answers, 2nd PUC Biology Question Bank with Answers, Karnataka State Board Solutions help you to revise complete Syllabus and score more marks in your examinations.

Question 2.
If a double stranded DNA has 20 percent of cytosine, calculate the percent of adenine in the DNA.
Answer:

Question 5.
Which property of DNA double helix led Watson and Crick to hypothesise semi-conservative mode of DNA replication? Explain.
Answer:
2 strands of DNA has complementary base pairs which run in opposite direction. Property was that during DNA replication one strand was conserved while the complementary is formed new.

Question 7.
How did Hershey and Chase differentiate between DNA and protein in their experiment while proving that DNA is the genetic material?
Answer:
They raised 2 types of bacteriophages

35S gets into protein and 32P into DNA When both bacteriophages infected bacteria differently and by shaking them, viral protein coat was separated

Question 8.
Differentiate between the followings:
(a) Repetitive DNA and Satellite DNA
Answer:

(b) mRNA and tRNA
Answer:

Question 10.
In the medium where E. coli was growing, lactose was added, which induced the lac operon. Then, why does lac operon shut down some time after the addition of lactose in the medium?
Answer:
Due to decrease in lactose substrate concentration, lac operon shuts down as it is inducible operon.

Question 11.
Explain (in one or two lines) the function of the followings:

(a) Promoter
Answer:
It is a gene that lies near operator which functions as binding site structural genes if operator allows.

(b) tRNA
Answer:
Functions as adapter molecule that picks  up a particular amino – acid from cellular pool and takes same over A site, m – RNA for incorporation into polypeptide

(c) Exons
Answer:
Coding segments present in primary transcript which on splicing by snRNP’s get joined to form functional m-RNA.

Question 12.
Why is the Human Genome project called a mega project?
Answer:
Because it involves

Question 13.
What is DNA fingerprinting? Mention its applications.
Answer:
DNA fingerprinting is technique of determing similarity and dissimilarity of VNTR’s between 2 samples of DNA so as to bring out relationship if any VNTR’s are specific for each individual. They are derived from parents in 50: 50 ratio.
Applications

The snRNA formed has codon information similar to sense or coding strand of DNA with just U replacing T.

(b) Polymorphism
Answer:
Polymorphism It is the occurrence of more than one form of genetic material
Types →

Question 4.
What is codon?
Answer:
It is the triplet nitrogenous base sequence which code for one amino acid. It lies on the m- RNA.

Question 5.
What is anti codon?
Answer:
It in the triplet nitrogenous bases in the t-RNA complementary to an m-RNA codon. It identifies a particular codon on mRNA.

Question 6.
What is a translation?
Answer:
It is the process of the formation of protein directed by a m-RNA molecule.

Question 7.
Define Transcription?
Answer:
It is the process of the formation of m-RNA on a DNA template.

Question 8.
Name the enzyme that catalyses
(a) Replication of DNA and
(b) Formation of RNA. (CBSE 1995)
Answer:
(a) Topoisomerase.
(b) RNA polymerase.

Question 9.
What is the genetic material of tobacco mosaic virus (TMV)
Answer:
RNA.

Question 11.
Due to mistake during transcription, ATG forms UAG in m-RNA. What change would occur in polypeptide chain translated by this m-RNA? (Cbse 1996)
Answer:
UAG is a termination codon and so at point protein synthesis will get stopped.

Question 14.
Name the scientist who proposed one gene one enzyme hypothesis. (CBSE 1997)
Answer:
Beadle and Tatum.

Question 15.
Name the enzyme that joints the short pieces in the lagging strand during synthesis of DNA.
Answer:
DNA legase. (CBSE 1998)

Question 17.
Give the present-day representation of central dogma.
Answer:

Question 18.
State Chargaff s base complementary rule.
Answer:
The total molar amount of adenine in any specimen of DNA is always equal to that of thymine. In a given DNA A = T and G = C.

Question 19.
Define mutation
Answer:
It is an abrupt and distinct change in the structure of base pair. It is a discontinuous inheritable and sudden change in an organism.

Question 20.
What do you call the kind of mutation in which a single base is added to a base strand : (CBSE 2K)
Answer:
Frame shift mutation.

Question 23.
Name the technique used by Watson and Crick to propose the double-helical structure of DNA molecule?
Answer:

Question 24.
Who discovered nucleic acid DNA? What was it called them?
Answer:
Fredrich Meischer. It was called as nuclein.

Question 27.
Name the process which occurs in virus where the formation of DNA occurs from RNA.
Answer:
Reverse transcription.

Question 28.
Name the components ‘a’ and ‘b’ in the nucleotides with a parent given below. (CBSE, Delhi 2008)
Answer:

Question 29.
What are histones?
Answer:
Histones are positively charges proteins found in association with DNA in eukaryotic cell.

Question 32.
Name the types of synthesis ‘a’ and ‘b’ occurring in the replication of DNA as shown below (CBSE 2008)
Answer: 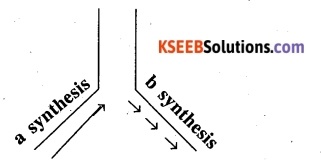 Question 33.
What is replication fork in DNA?
Answer:
During DNA replication the unwinding of DNA leads to the formation of ‘Y’ shaped structure to the 2 strands of DNA duplex. This is known as the replication fork.

Question 34.
Define a cistron
Answer:
A cistron is defined as the length of mRNA, that codes for a polypeptide.

Question 35.
What is meant by hnRNA?
Answer:
The hnRNA is the precursor of mRNA transcribed by RNA polymerase II in eukaryotic cells hn represents heteronuclear RNA.

Question 36.
When and at what end does the ‘tailing’ of hnRNA take place? (AI 2009)
Answer:
After splicing, tailing occurs at the 3′ end of hn RNA.

Question 40.
Given below is a schematic representation of a lac operon in the absence of an inducer. Identify ‘a’ and ‘b’ in it
Answer:

a – Repressor
b – operator.

Question 41.
What term is given to a single base DNA differences?
Answer:
When the repressor binds to the operator, the operon is switched off and transcription is stopped.

Question 43.
Regulation of lac operon by repressor is referred to as negative why is it so?
Answer:
When the repressor binds to the operator, the operon is switched off and transcription is stopped.

Question 44.
Name 2 plants whose genome have been sequenced.
Answer:
Rice and Arabidopsis.

Question 45.
Define DNA polymorphism
Answer:
Inheritable mutations at high frequency in a population. It refers to the variation at genetic level.

Question 47.
What is a probe in DNA-finger printing?
Answer:
A probe is a short stretch of DNA, with the nucleotide sequence that is complementary to that of VNTR sequence.

Question 48.
Name the branch of science that HGP is closely associated with.
Answer:
Bioinformatics.

Question 49.
Given below is the sequence of steps of transcription in eukaryotic cell. Fill up the blank 1, 2, 3, 4 left in the sequence.
Answer: 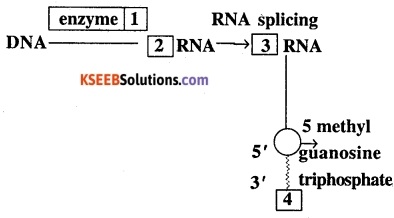 Question 50.
Write any 3 unusual bases present in Yeast’s alanine tRNA with their sources.
(CBSE 2004)
Answer:
All tRNA have 2 unusual bases – dihydro uridine (derived from uracil) and pseudo uridine (from uraicl. The third common unusual base is hypoxanthine (from adenine).

Question 1.
What are 5′ end, 3′ end of a polynucleotide chain?
Answer: 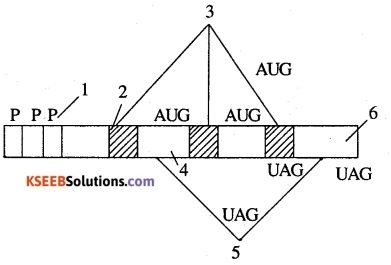 Question 3.
Name the components (parts) A and B of the transcription unit ‘given below.
Answer:

A – Promoter
B – Coding strand.

Question 4.
(a) Who first proposed semi-conservative mode of replication of DNA.
(b) Which organisms is used in this experiment?
(c) Name the techniques used
(d) What is the result of first, second and 3rd generation?
Answer:
(a) Watson and Crick (1953)

Question 6.
State any one reason to explain why RNA virus mutate and evolve faster than other viruses.
Answer:
RNA is an unstable highly reactive molecule due to its single-stranded structure and exposure of its nitrogen bases. But DNA is stable, the molecule, as its, nitrogen bases are not exposed, became its double-helical nature.

Repressor binds to the operator region
(o)  and prevent RNA polymerase from transcribing the given.
Look at the figure above depicting lac operon in E-Coii.
(a) What could be a series of events when an inducer is present in the medium in which E. Coli is growing.
(b) Name the inducer.
Answer:
(a) When the inducer is present in the medium it is absorbed at first slowly into the bacterium. The inducer binds with the repressor attached to the operator gene the repressor leaves the operator gene and allows the RNA polymerase to pass from promotor to the structural genes for transcription or formation of a polycistronic mRNA.
(b) Lactose or galactoside.

Question 11.
Write the differences between mono-cistronic and polycistronic mRNAs.
Answer:

Question 14.
Why is that transcription and translation can be coupled in prokaryotic cell but not in eukaryotic cells?
Answer:
(a) In prokaryotes, mRNA does not require any processing to become active

(b) Transcription and translation occur in the same compartment cytosol, as there is no well defined nuclear membrane. There for it can be coupled.

In eukaryotic m-RNA has to be processed (splicing) before it become active. Since RNA is synthesised inside the nucleus and translation occurs in the cytoplasm, coupling of transcription and translation is not possible.

(b) It binds to the codon on mRNA through hydrogen bonds with its anticodon as it is recognised by the codon of the amino acid it carries, it is to release the amino acid at the correct site for polypeptide elongation.

Question 16.
What is an operon? How does lactose act as an inducer in the lac operon? (Al 2008)
Answer:
All the genes controlling a metabolic pathway, collectively constitute an operon. Lactose binds to the repressor and inactivates it, and prevents it from binding to the operator. As a result, the RNA polymerase gets access to the promoter and transcription proceeds, ie., the operon is induced to function.

Question 18.
Give the applications of DNA fingerprinting?
Answer:

Question 19.
How is nucleosome formed? Draw a diagram of the nucleosome.
Answer: 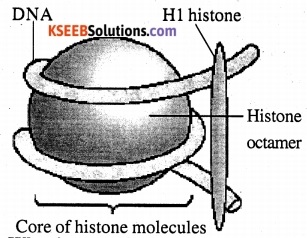 Question 20.
What is meant by R – cells and S – cell with which Frederick Griffith carried out his experiments on Diplococcus pneumonial? What did he prove from these experiments?
Answer:
R – cells are those bacterial cells that form rough colonies, without a capsule and are non-virulent. S – cells are those cells, that form smooth colonies, with a capsule and are virulent. He proved that virulence of S – cells had some how been transferred into R – cells, which became transformed into S- cells, it is the genetic material that had effected transformation.

Question 21.
Draw the schematic representation to show continuous or discontinuous synthesis of DNA (replication of DNA) and label it.
Answer: 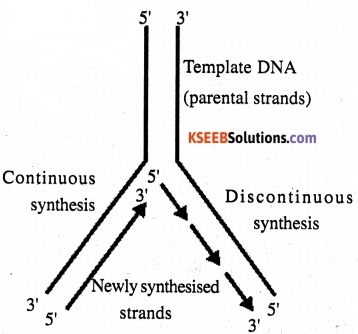 (b) When three or multiples of three bases are added there is addition of one or more amino acids and the reacting of the frame remains unaltered after that. This provides the genetic proof that codons are triplets.

Question 24.
(a) Draw the schematic diagram of tRNA showing the following.
(i) Methionine attached to the amino acid accept site.
(ii) Correct base sequence at the anticodon loop
(b) Write the role of “untranslated regions” on mRNA segment play in protein synthesis?
Answer:
(a) 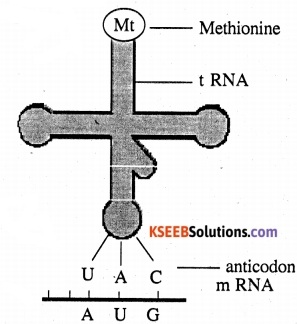 (b) They are needed for efficient translation 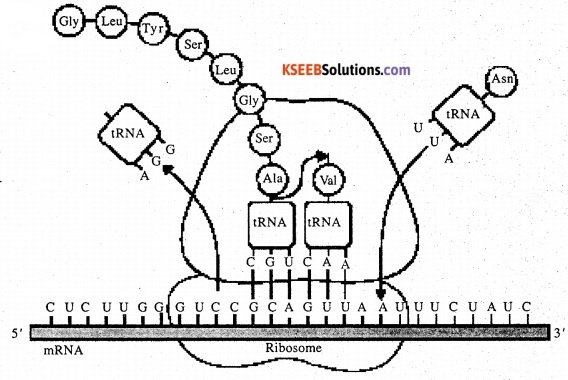 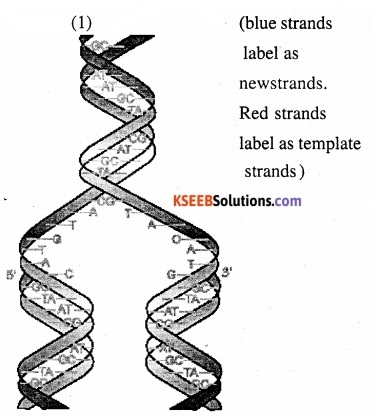 Question 3.
Write short notes on different types of RNAs.
Answer:
The RNAs are of 3 types

Question 4.
Define genetic code and write its salient features.
Answer:
Genetic code is the relationship between the sequence of nucleotides on mRNA and sequence of amino acids in the polypeptide.
Its features are

Question 5.
(1) Represent schematically the process of transcription in eukaryotic cells.
(2) How does DNA polymerase function in the replication fork of DNA?
Answer: 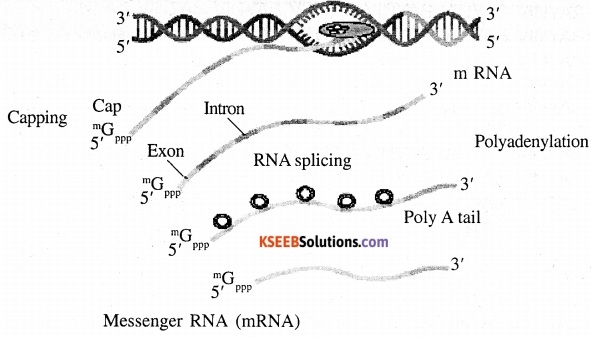 Question 6.
(a) Explain with the help of schematic representation, the lac operon in E-Coli.
(b) Mention the role of lactose in this operon.
Answer:
(a) Jacob and Monod explained that lactose inducer the expression of genes leading to its catabolism. 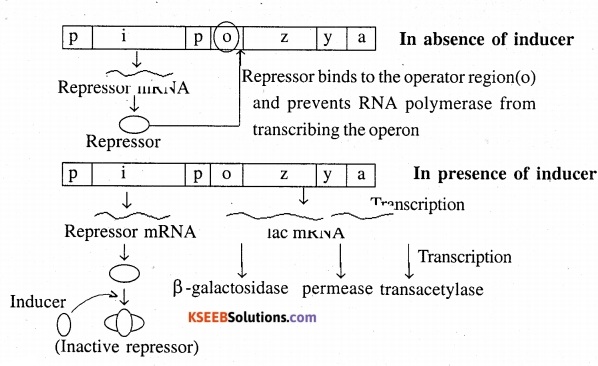 (b) Role of lactose