You can Download Chapter 16 Chemistry in Everyday Life Questions and Answers, Notes, 2nd PUC Chemistry Question Bank with Answers Karnataka State Board Solutions help you to revise complete Syllabus and score more marks in your examinations.

Question 1.
Why do we need to classify drugs in different ways?
Answer:
The classification of drugs and the reason for classification are as follows:
1. On the basis of pharmacological effect: This classification provides doctor the whole range of drugs available for the treatment of a particular type of problem Hence, such a classification is very useful to doctors.

3. On the basis of chemical structure: This classification provides the range of drugs sharing common structural features and often having similar pharmacological activity.

Drugs are chemical agents designed to inhibit these target molecules by binding with the active sites of the key molecules.

Question 8.
Low level of noradrenaline is the cause of depression What type of drugs are needed to cure this problem? Name two drugs
Answer:
Anti-depressant drugs are needed to counteract the effect of depression These drugs inhibit enzymes catalysing the degradation of the neurotransmitters, nor adrenaline As a result, the important neurotransmitters is slowly metabolised and then it can activate its receptor for longer periods of time.
Two anti-depressant drugs are:

Iodine is an example of a strong antiseptic Tincture of iodine (2-3 percent of solution of iodine in alcohol – water mixture) is applied to wounds 1 percent solution of phenol is used as a disinfectant.

Cimetidine and ranitidine are better antacids as they control the root cause of acidity These drugs prevent the interaction of histamine with the receptors present in the stomach walls Consequently there is a decrease in the amount of acid release by the stomach This is why cimetidine and ranitidine are better antacids than sodium hydrogen carbonate, magnesium hydroxide, and aluminium hydroxide. 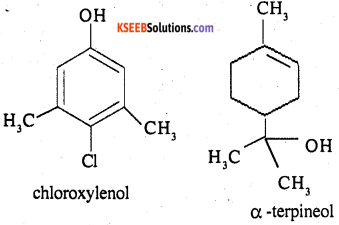 Question 23.
Why do soaps not work in hard water?
Answer:
Soaps are sodium or potassium salts of long-chain fatty acids Hard water contains calcium and magnesium ions When soaps are dissolved in hard water, these ions displace sodium or potassium from their salts and form insoluble calcium or magnesium salts of fatty acids The insoluble salts separate as scum.

this is the reason why soaps do not work in hard water. 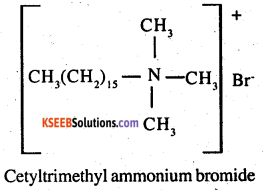 2. Non-ionic detergents Molecules of these detergents do not contain any ions These detergents are esters of alcohols having high molecular mass They are obtained by reacting polyethylene glycol and stearic acid.

Question 26.
Label the hydrophilic and hydrophobic parts in the following compounds 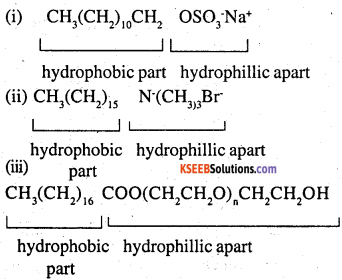 Question 27.
Sleeping pills are recommended by doctors to the patients suffering from sleeplessness but it is not advisable to make its dose without consultation with the doctor, Why?
Answer:
Most drugs when taken in doses higher than recommended may carry harmful effects and sometimes, may even lead to death Hence, a doctor should always be consulted before taking any medicine.

Question 28.
With reference to which classification has the statement, “ranitidine is an antacid” been given?
Answer:
The given statement refers to the classification of pharmacological effects of the drug This is because any drug that is used to counteract the effects of excess acid in the stomach is called an antacid. 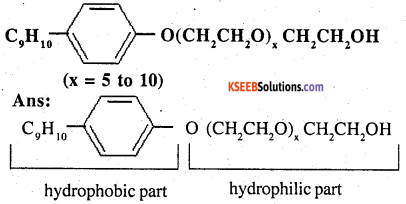 Functional groups present in the molecule are:

Question 1.
In order to wash clothes with water containing dissolved calcium hydrogen carbonate, which cleaning agent will you prefer and why: Soaps or synthetic detergents? Give one advantage of soaps – over synthetic detergents
Answer:
Water containing calcium hydrogen carbonate is hard water Detergents are preferred over soaps for cleaning clothes in hard water because calcium salts of detergents are soluble in water while calcium salts of soaps are insoluble As a result, lot of soap is wasted

Disadvantage of using detergents: Soaps are biodegradable while detergents having branched hydrocarbon chains are not biodegradable and hence cause water pollution in rivers and waterways.

Question 4.
How does aspirin act as analgesic?
Answer:
Aspirin inhibits the synthesis of erostaglandis which stimulate inflammation of the tissue and cause pain.

Question 5.
What are barbiturates? To which class of drugs do they belong?
Answer:
55 derivatives of barbituric acid are called barbiturates They belong to class of tranquilizers.

Question 6.
What is salvarsan? To which class of drugs do they belong?
Answer:
Salvarsan is an antimicrobial agent It is used for the treatment of disease called syphillis

Question 8.
Define a tranquilizer
Answer:
Tranquilizers are drugs which act on central nervous system to help in reducing anxiety.

Question 9.
What is the nature of an antacid?
Answer:
Substances which reduce the release of excess HCl by preventing the interaction of histamine with the receptors present in the stomach wall are called antacids Examples cimetidine and ranitidine.