Question 1.
What is DHTML?
Answer:
DHTML refers to web content that changes each time it is viewed. A DHTML web page can react to user input without sending requests to the webserver.

Question 2.
Define e-commerce.
Answer:
The e-commerce is defined as buying and selling of products or services over electronic systems such as the internet and other computer networks.

Question 3.
Define Local Area Networking.
Answer:
The LAN is defined as a computer network covering a small physical area like a home, office, or small group of buildings such as a school or an airport.

Question 4.
Define the term ‘topology’ of computer networks.
Answer:
It is the geometric arrangement of a computer system in a network. Common topologies include a linear bus, star, ring, and ring.

Question 5.
Define data mining.
Answer:
It is the process of discovering interesting knowledge, such as patterns, associations, changes, anomalies from large amounts of data stored in databases using pattern recognition technologies as well as statistical and mathematical techniques.

Question 12.
Give the general syntax for defining classes and objects.
Answer:
The syntax of a class definition: 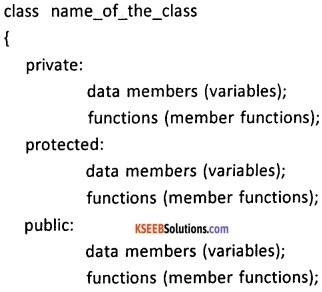 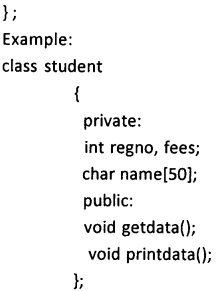 Question 20.
What is meant by shareware? Write its limitations.
Answer:
Shareware is software that is distributed free on a trial basis with the understanding that the user may need or want to pay for it later. The limitations are:

Properties of the relational database model:

Question 22.
Give the functions of the following:
Answer:

For example:
int * a = new int;
In the above example, the new operator allocates sufficient memory to hold the object of datatype int and returns a pointer to its starting point. The pointer variable holds the address of memory space allocated.

2. Online UPS:
This type of UPS is better than Offline, because no matter main power source is on or off, output always come from battery source.

Answer any seven of the following questions. Each question carries Five marks: (7 × 5 = 35) 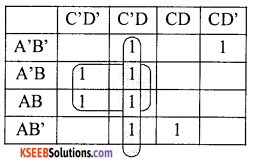 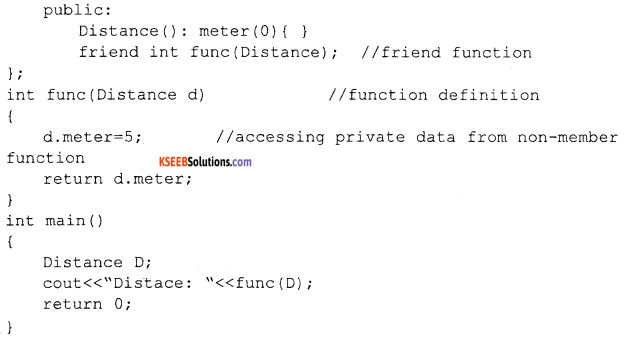 Question 32.
Explain defining objects of a class with syntax and a programming example.
Answer:
The objects are declared after a class is defined. The object declaration create object of that class and memory is allocated for the created object. The object are created using the following syntax:
classname objectname1, objectname2,……………;
for example
student obj1, obj2;
the obj1 and obj2 are the objects of class type student.
The object names are used to access the data members through member functions by invoking member functions.
For example:
obj1.getdata(5, 25);
here, getadata() is the member function of a class student and function call is give using object obj1 which assign the value 5 and 25 to the data members of the class. The memory is allocated separately for data members of each object.

2. Effort:
Object Oriented programs require a lot of work to create. Specifically, a great deal of planning goes into an object oriented program well before a single piece of code is ever written. Initially, this early effort was felt by many to be a waste of time. In addition, because the programs were larger (see above) coders spent more time actually writing the program.

3. Speed:
Object Oriented programs are slower than other programs, partially because of their size. Other aspects of Object Oriented Programs also demand more system resources, thus slowing the program down.

5. Not all programs can be modeled accurately by the objects model. If you just want to read in some data, do something simple to.it and write it back out, you have no need to define classes and objects. However, in some OOP languages, you may have to perform this extra step.

The network security concerns with allowing only legal or authorized users and programs to gain access to information resources like databases. It also ensures that properly authenticated users get access only to those resources that they are supposed to use. Many network security threats today are spread over the Internet. The most common include:

The network security makes use of a variety of resources like user name, password, encrypted smart cards, biometrics, and firewalls to protect resources.