Utility is the calculation of want satisfying power of a particular commodity before consumption where as a consumer gets satisfaction only after consumption or usage of the same. Anything that satisfies human wants, possesses utility. For example food, cloth, pen, paper, T.V, Mobile etc. People keep such goods to satisfy their wants.

Features of Utility:
1. ‘Utility’ should be differentiated from ‘Satisfaction’. Here, utility refers to an expected satisfaction and satisfaction is the actually realized one.

2. Utility is not usefulness always: A product may satisfy a person’s desires but it may not be useful or beneficial to them, it may be harmful (like tobacco, liquor).

3. Utility is neutral in ethics: That means it does not throw’ any light on moral principles while ‘ satisfying a specific need of a consumer.

4. Utility is subjective: It varies from person to person, time to time and from place to place

1. Cardinal Approach: This approach to the theory of demand was developed by neo-classical economists like Marshall and Pigou. The basic idea of this approach is that a consumer buys a certain commodity or service because of its utility and due to the power that it possesses to satisfy his want. Here the utility can be measured cardinally. That means it is possible to know exactly the number of units of utility that a commodity or service contains for the consumer. The unit of measurement of utility may be called a ‘util’.

2. Ordinal Approach: This approach says that the utility cannot be measured in terms of numbers but it can be ranked like 1st, 2nd, 3rd so on. This was developed by the economists like J.R.Hicks, and Slutsky.

Initial Utility: It refers to that utility which is derived from the consumption of first unit of a product.

One of the most important propositions of the cardinal utility approach to demand was the Law of Diminishing Marginal Utility. German Economist Gossen was the first to explain it. Therefore, it is called Gossen’s First Law.

Definition:
According to Alfred Marshall, “The additional benefit which a person derives from a given increase of a stock of a thing diminishes, other things being equal, with every increase in the stock that he already has”.

This law simply tells us that, we obtain less and less utility from the successive units of a commodity as we consume more and more of it. 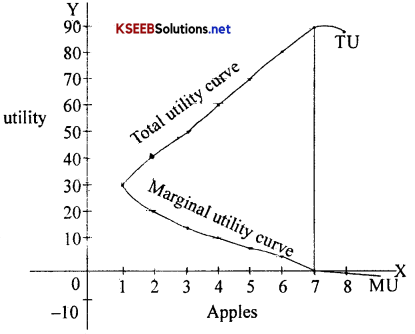 In the diagram, the horizontal axis shows the units of apples and the vertical axis measures the MU and TU obtained from the apple units. The total utility Curve will be increasing in the beginning and later falls. The Marginal Utility curve is falling from left down to the right clearly tells us that the satisfaction derived from the successive consumption of apples is falling.

Consumer Behaviour:
Every consumer has clear-cut preferences over the products that are available. The consumer always behaves rationally and tries to make use of his money income to get maximum satisfaction. With his limited income, he decides to consume more of one product and less of another.

Budget Set: (A budget set is a collection of all the bundles that the consumer can buy this income prevailing market prices. The Budget set is also known as opportunity set. It provides all the goods (all possible combinations of quantities of two goods) which the consmer can purchase given level of income)

The concepts of Budget Set and Budget Line can be explained with an illustration. Suppose a consumer has Rs.40. He spends this on two commodities Mango and Banana. The possible of spending Rs.40 are given in a form of table as follows. Let us assume that the price of Mango is Rs.8 each and Banana is Rs.4 each. 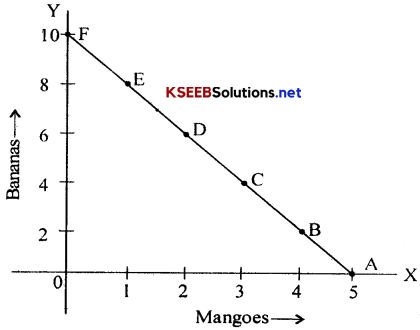 In the above diagram, Mangoes are measured along X-axis, and Bananas are measured along axis. At Point A, the consumer is spending his entire income on Mangoes and at Point F he buys only bananas. Between A and F, there are other options like B, C, D, E. By joining these points, we get, a straight line AF which represents the consumer’s possible purchasing options in spending his entire income of Rs.40, on these two goods at the given prices.

Features or properties of Budget Line:

1. The Budget line AF slopes downwards from left to right indicating that more of one product can be purchased by reducing some units of the other product.

2. The combination of products which are equal to consumer’s income lie on the Budget line.

3. The combinations whose total price is less than consumer’s income, lie below the Budget A line. They show under-spending.

4. The combination of goods whose totafprice is more, lie above the Budget line. These options
are not affordable prices to the consumer.

Shift in Budget Line: A shift in Budget line takes place if there is a change in the income of ‘ the consumer or price of the products.

Suppose there is an increase in the income of the consumer, the budget line shifts to the right of the original budget line. This is represented in the following diagram: 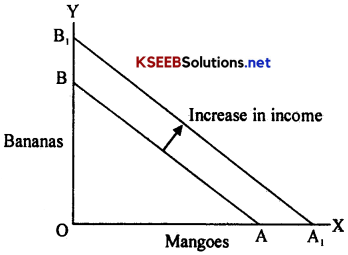 If there is decrease in the income of the consumer, the budget line shifts to the left of the original budget as shown in the diagram below: 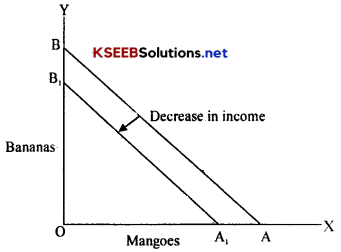 If the price of Mango falls, the budget line will shift to the right of the original budget line making, a narrower angle with the x-axis. From BA it becomes BA1. 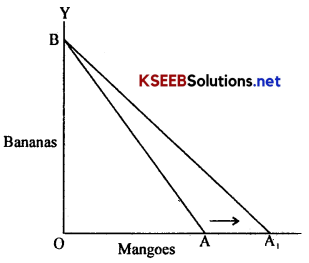 If the price of Banana increases, the budget line will shift to the left of the original budget line making, a wider angle with the y-axis. From BA it becomes B1A. 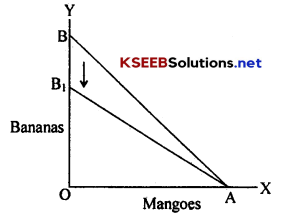 An Indifference Curve is the locus of all those points representing various combinations of two goods giving the same satisfaction to the Consumer.

According A.L.Meyers, “An Indifference curve is a schedule of various combinations 01 goods which will be equally satisfactory to the consumer concerned.” 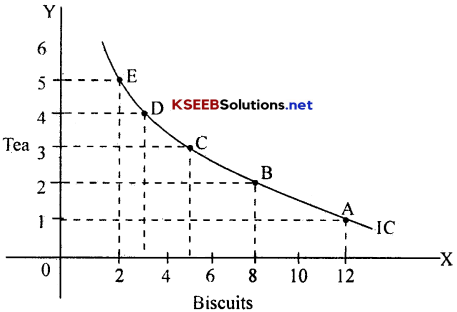 In the above diagram. IC is an Indifference curve. The different points on it show the various combinations of Tea and Biscuits. The consumer likes all of them equally. IIc is indifferent about is shoen by joining these points we obtain the IC. Although in the successive combinations the amount of biscuits goes on diminishing as we move from the left side of the IC to the right, the increase in the quantity of tea is sufficient to compensate him for the loss of biscuits so that the consumer is indifferent about them, indifference, curve shows the different combinations of two commodities in which consumers get equal satisfaction. 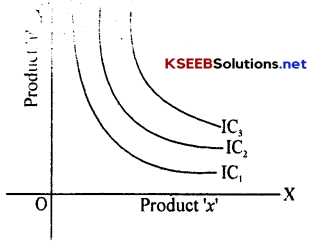 → It means that as the amount of a commodity with the consumer goes on increasing he is prepared to exchange the other commodity for equal units of the commodity whose amount is increasing.

→ According to Prof.Bilas, “The marginal rate of substitution of X for Y is defined as the amount of Y the consumer is just willing to give up to get one more unit of X and maintain the same level of satisfaction.

→ The marginal rate of substitution between two commodities is shown by the shape of indifference curve showing their combinations. If the two commodities are X and Y, the MRS between them is written as MRSxy = ∆X/∆Y. It is the rate at which the consumer is willing to substitute Y for X.

It was built by Prof.J.R.Hicks. This principle is similar to the Law of diminishing marginal utility and is yetdifferent. The DMRS states that the consumer will be willing to forgo smaller and smaller units of Y in order to have successive additional units of X. This can be explained with the help of following table.

MRS of X fork Yjs the ratio of the change in the-quantity of Y for a change in the marginal quantity of X which would keep the consumer on the same indifference curve.
MRSxy = AX/AY.

Since MRS is denoted as. the slope of an indifference curve, it is conunonly negative and falling. The convex IC falling from left down to the right shows the Law of Diminishing Marginal Rate of Substitution. 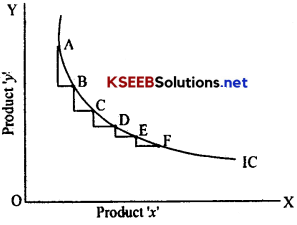 In the above diagram the MRS is diminishing from the points A to B, C, D and so on. 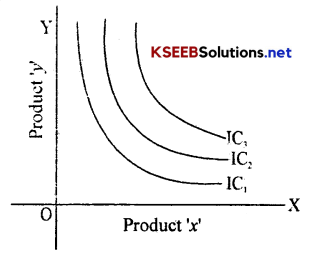 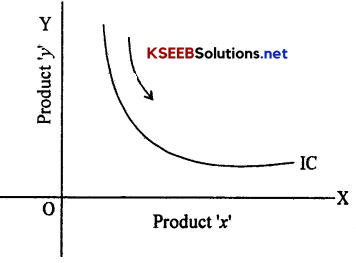 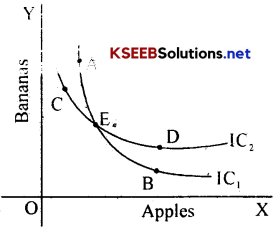 If the two IGs intersect, the same IC show different level of satisfaction. In the above diagram ‘A’ and ‘B’ are representing two levels of satisfaction which is absurd, similarly incase of IC2 also.

4. Indifference Curves are convex to the origin: The MRS between two goods diminishes as we-move from left down to the right along the IC as shown below. Points P and Q lie on indifference curve IC. As we move from P to Q, there is an increase of commodity A but a corresponding lessening of commodity B. That means MRS goes on diminishing along the IC. So IC should be convex to the origin. 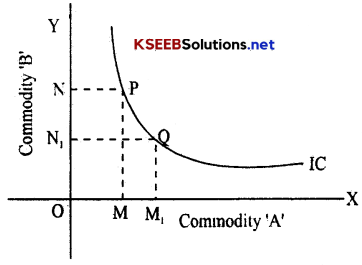 6. IC cannot be a downward sloping straight line: A straight line IC shows perfect substitutes on the X and Y axis; therefore, the MRS remains the same in spite of the fact that the stock of one good continues to . increase and that of the other diminishes. 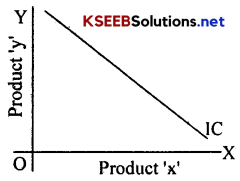 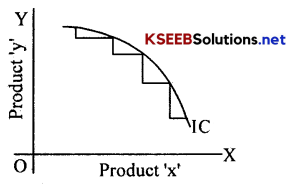 8. IC cannot be positively sloped: If IC slopes upwards Y -positively, it means that the consumer prefers more N units of both the commodities, which is not possible, is 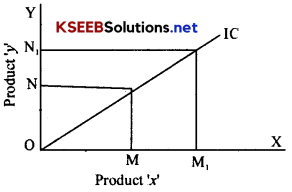 9. Indifference curves can ndt be parallele: If the IC, are parallel, the marginal rate of substitution diminishes at the same rate. But, this is not true. 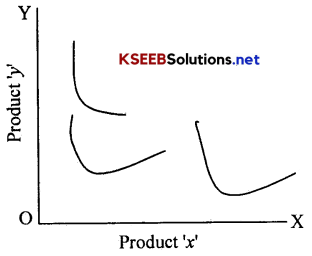 10. The ICs do not touch the horizontal or the Vertical axes: Indifference curves have the basic assumption that the consumer purchases combinations of different commodities. Therefore, he is not supposed to purchase only one commodity because in that case the IC will touch one axis. Purchasing only one commodity means monomania i.e., consumer’s lack of interest in the other commodity.

11. An IC cannot have a bulge: The bulge in IC shows that the Marginal rate of substitution is not diminishing consistently. Here the consumer is irrational and behaving erratically. 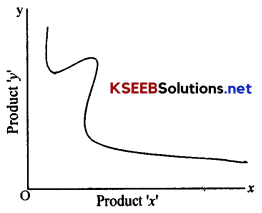 That means when the Budget line of a consumer is tangent to his IC, he is in equilibrium. 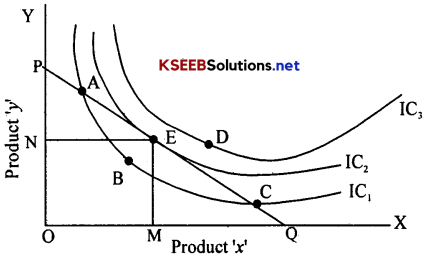 PQ is the budget line.
The consumer has attained his optimal choice at point E where he buys OM quantity of x product and ON quantity of y product within his budget to get maximum satisfaction. If he selects a point below E, he is wasting his available income and the combinations above this point are not possible as his income is not sufficient. At Point E, the Budget line and IC2 intersect. This can be expressed as follows:

That means the willingness to substitute is equivalent to the ability to pay. So, a consumer is said to be in equilibrium if his budget line is tangent to IC or when the MRS is equal to the price ratio of the two goods.