The Concept of Demand:

→ The concept ‘demand’ refers to the quantity of a good or service that a consumer is willing and able to purchase at various prices, during a period of time. It is to be noted that demand in Economics is something more than desjre to purchase though desire is one of the elements of demand. For example, a beggar may desire food, but due to lack of ability to purchase his demand is not effective.

→ So, the concept of demand includes three elements viz., Desire to buy, ability to pay and willingness to pay. Alfred Marshall has developed the theory of demand analysis.

There are many factors which influence the demand of consumers: They are:

→ The Demand Function refers to a functional relationship between quantities demanded and its determinants. It can be expressed as follows:
Qd = f(P, Pr, Y, T, ……..)

→ Where Qd stands for Quantity demanded, ‘f is function, P is Price of commodity, Pr – price of reiated(substitutes, Y is income of consumers, T is tastes and preferences of consumers.

→ As the Price plays a predominant role in determining quantities demanded, we can rewrite the demand equation as follows:
Qd = f (P)

→ where Qd is demand, ‘f’ is function and P is price of the product.

→ The demand function, in the form of equation can be represented as follows:
Qd = a – bp

→ Where Qd is quantity demanded, ‘a’ and ‘b’ are constants. It is linear (i.e., when represented in graph we get a straight line). Here ‘a’ represents maximum limit and ‘-b’ represents slope nf the function. So, the slope of demand is downward. That means there is inverse relationship between price and quantities demanded.

The Law of Demand:

→ According to Prof.Samuelson, the law of demand states that ‘People buy more at lower prices and buy less at higher prices, other things remaining the same’.

→ In the above individual demand schedule, the consumer is purchasing different quantities at different price levels. At Rs.3 he buys 28 kgs, at Rs.4, 24 kgs are bought arid so on. As the price increases, the quantities demanded falls.

→ Demand Curve: “The graphical presentation of the demand schedule is called demand curve. 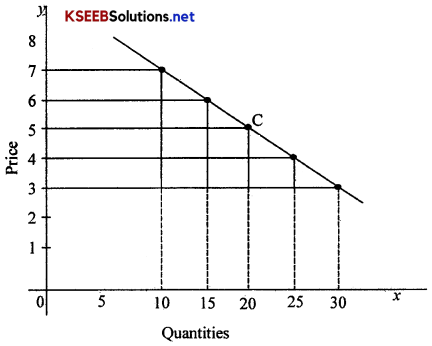 → The demand curve slopes downwards from left to right. It shows that the rate at which demand changes with respect to change in pride. As there is inverse relationship between price and quantities demanded, the Curve is negatively sloped.

3. Income effect:
A change in demand as a result of change in income is called as Income effect. As price falls, the real income of the consumer increases. With this increased real income (gets more purchasing power with more money in his hands), he buys more.

4. Substitution effect:
When the price of one product falls, it become cheaper when compared to other products for which the price remains constant. Hence, a consumer will substitute low priced product to high priced products. The result is that demand for a product rises as price falls.

5. Price Effect:
When the change in quantities demanded is caused by the change in price, . it is called as Price effect. When the price of a product falls, it becomes cheaper and consumer buys more of that and vice versa.

→ The competing goods or substitutes are alternative products which can be used easily in place of another to satisfy a particular need of consumer. For example, coffee and tea, ink pen and ball pen etc,. In case of substitutes, a fall in price of one commodity leads to a fall in the quantity demanded of another commodity. There is direct relationship between price of substitute and quantity demanded of a product.

→ Complementary goods are those goods which are consumed together to satisfy our wants. For example, vehicle and petrol, shoes and socks, bat and ball etc. If the price of petrol increases the demand for vehicle falls and vice versa. There is inverse relationship between price of a product and demand for its complementary product.

Movements along the demand curve – Expansion and contraction of demand:

It shows the movement of quantities demanded due to changes in price level which can be represented on demand curve. When the price becomes less, more quantities are demanded, hence it is called as Expansion of Demand and when the price rises, there will be fall in quantities demanded, it is called Contraction of Demand. When the same is represented on graph, we get movement on the same demand line/curve. Thus any changes in price leads to movements along the demand line as shown below. 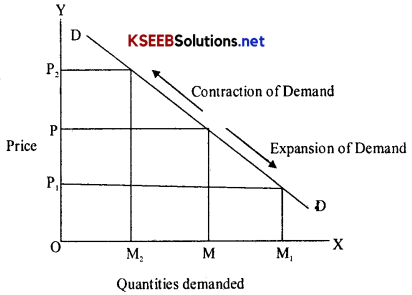 Shift in demand curve-Increase and Decrease in Demand:
The increase and decrease in demand are caused by all the determinants of demand except price. When there is a change in consumer’s income, tastes and preferences, price of related goods, there may be increase or decrease in the Demand. 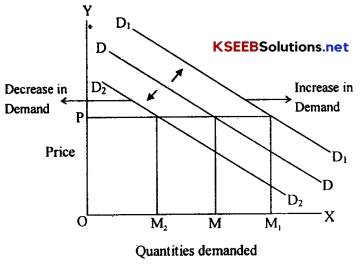 Market Demand: The market demand refers to the aggregate demand function of an entire market. It is said that, the market demand for a product at a particular price is the total demand of all the consumers in the market taken together.

Meaning & Definition:
→ Elasticity of demand is generally defined as the responsiveness or sensitiveness of demand to a given change in the price of commodity.

→ It refers to the capacity of demand either to stretch or shrink to a given change in price.

I. Price Elasticity of demand:
→ In the words of Prof. Stonier & Hague, “Price elasticity of demand is a technical term used by economists to describe the degree of responsiveness of the demand for a good to a change in its price.

→ It is measured by using the following formula.

Classification of Price Elasticity of Demand:

On the basis of the degree of price elasticity for different goods, we classify PED as follows:

1. Perfectly Elastic Demand:
In this case, a very small change in price leads to an infinite change in demand. The demand curve is a horizontal curve and parallel to x axis. The numerical co-efficient of price elasticit of demand is unlimited or infinity. Ped = ∞ 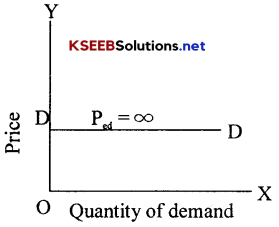 2. Perfectly Inelastic Demand:
In this case, whatever may be the change in price, quantity demanded will remain perfectly constant. The demand curve is a vertical straight line and parallel to Y axis. Quantity demanded would be 10 units, irrespective of price changes from Rs. 10.00 to Rs.2.00. Hence, the numerical co-efficient of perfectly inelastic demand is zero. Ped = 0 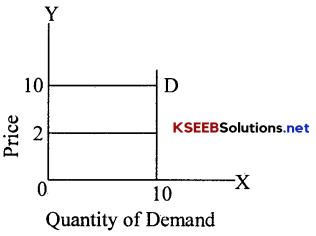 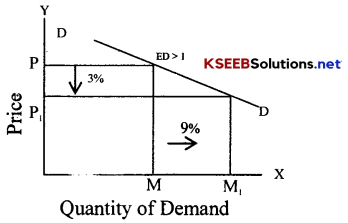 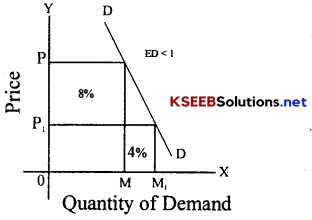 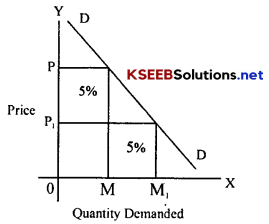 Out of five different degrees the first two are theoretical and the last one is a rare possibility. Hence, in all our general discussions, we make reference only to the two terms- relatively elastic demand and relatively inelastic demand.

Determinants of Price Elasticity of Demand:

1. Nature of the Commodity:
→ In case of comforts and luxuries, demand tends to be elastic because people buy those more only when their prices are low. For e.g. TV sets.

→ In case of necessaries, demand is inelastic because whatever may be the price people have to buy and use them. For e.g. Rice.

2. Existence of Substitutes:
→ If a product has substitutes, demand tends to become elastic because people compare the prices of substitute goods and cheaper products are purchased. For eg. Blades, Soaps.

→ If a product has no substitutes, demand becomes inelastic because in that case whatever may be the price, people have to buy them. For e.g. Onion.

3. Durability of the commodity:
→ If a product is perishable or non durable, demand tends to be inelastic because people buy them again and again.

→ If a product is durable, demand tends to be elastic because people buy them occasionally.

4. Number of uses of a commodity:
→ If a product has multiple uses, demand tends to become elastic because, with a fall in price, the same product can be used for many purposes. For e.g. Electricity, coal etc.

→ If a product has only one use, the demand becomes inelastic because people have to buy them for a specific single purpose whatever may be the price. For e.g. All eatables, seeds, fertilizers, pesticides etc.

5. Possibility of postponing the use of a product:
→ If there is a possibility to postpone the use of particular product, demand tends to become elastic. For eg. Buying a scooter, motorcycle, TV sets etc.’people generally buy these articles when they are cheaper.

→ If it is not possible to postpone, demand tends to become inelastic. In this case, whatever may be the price, people have to buy them. For e.g. Medicine.

6. Level of income of people:
→ Generally speaking, demand will be elastic in case of the poor people because even a small change in price will affect the demand for various products.

→ On the other hand, demand will be inelastic in case of rich people because they are ready to spend any amount on buying a product.

7. Habits:
→ If people are not habituated for the use of certain products, then demand tends to be elastic. If products are cheaper, they buy more and if they become costly, they may buy less or may not buy them at all.

→ When people are habituated for the use of a commodity, they do not care for price changes over a certain range. For eg. Cigarettes, liquor etc. In that case, demand tends to become inelastic.

8. Complementary goods:
→ Goods which are jointly demanded are inelastic in nature. For e.g., pen and ink, vehicles petrol etc. This is because, if people buy one product, they have to buy the supplementary products also without which they cannot make use of the first item.

→ Demand tends to be elastic in case of independent products. For eg., biscuits, chocolates, ice-creams etc. In this case, consumption or use of a product is not linked to any other products. Hence, they may or may not buy a product.

→ Here, ∆q stands for change in quantity, ∆y is change in Income of consumer, ‘y’ is the initial income and ‘q’ the initial quantity. 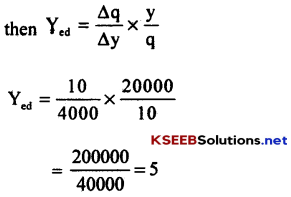 So, Income Elasticity of Demand is greater than one.

→ The formula for calculating cross elasticity of demand is as follows: