Question 1.
Who is compared to “a snowy dove” in ‘Romeo and Juliet’?

Question 3.
Where do the souls of children dwell in ‘On Children’?

Question 4.
Who wrote the book ‘Monocultures of the Mind’ with reference to ‘Everything I Need to Know I Learned in the Forest’?

Question 6.
What look did the woman’s eyes have once in ‘When You Are Old’?

Question 7.
Who was Tammanna’s rival in ‘The Gardener’?

Question 8.
Where was Luis Borges educated?

Question 9.
Where does the poet create heaven in ‘Heaven, If You Are Not Here On Earth’?

Question 10.
Whose life is becoming more hazardous in Brazil every day?

Question 11.
Which is the election symbol of the People’s Alliance Party?

Question 12.
Who was the central coordinator of the cycling movement in ‘Where There Is A Wheel’?

Question 13.
How does Romeo describe Juliet’s beauty in ‘Romeo and Juliet’?

Question 14.
Why did the authorities fail to carry out the death sentence in ‘Too Dear’?

Question 15.
What should be the parents’ attitude towards their children according to the prophet, in the poem ‘On Children’?

Question 16.
Write a short note on ‘The Navdanya Farm’ with reference to ‘Everything I Need To Know I Learned In The Forest’.

Question 17.
What account does Don Gonzalo give Dona Laura about his cousin’s life after the duel?

Question 18.
Give an account of the strategies used by Tammanna to destroy Basavaiah in ‘The Gardener’.

Question 19.
Write a short note on the stages of hardships faced by the foot after being confined in a shoe with reference to the poem ‘To The Foot From Its Child’.

Question 20.
What are Luis Borges’ views on books?

Question 21.
Give an account of the Japanese mania for bowing as described by George Mikes.

Question 22.
The roof is an intelligent manipulator. Justify with reference to the story ‘The Voter’.

Question 23.
How does the poem ‘Water’ demonstrate the disparity and discrimination in our society using water as a symbol?
OR
“Wheel brings progress”. Justify this statement with reference to ‘Where There Is A Wheel.
OR
“The ways of providence are strange”. How is this true in the case of Don Gonzalo and Dona Laura with reference to the play ‘A Sunny Morning’?

The word ‘Buddha’ literally means ‘The Enlightened One’. This was the title given to Siddhartha Gautama. He became the founder of the religion called Buddhism.

Buddha was born as a Prince in the 6th Century B.C. in a warrior community of Nepal called ‘Sakyas’. Although brought up in luxury, he did not show any attachment to the material delights. Whom Buddha was young, he had a philosophical temperament. Though he had everything necessary for worldly pleasures, he was somehow dissatisfied.

One day, the prince went out of his palace on his chariot to get a glimpse of the town. On his way he saw three sights which he had never seen before; a sick man, an old man and a dead man. There had a deep impact on his mind and made him sad and thoughtful.

He could sense the eternal truths of life and realised that life was full of sorrows and suffering. He wondered, if sickness, old age and death ultimately grab everyone’s life then what was the goal of life and how men could best use the comparatively short lives they had on this earth. These questions kept haunting his mind.

One night, the prince left his palace in pursuit of his goal. He was then 29 years old, married and father to a son. He left behind his wife and an infant son in the palace. Later, he travelled from one place to another, reached a place in North India, now called Bodh Gaya.

There, he sat for many days under a tree in deep meditation, until suddenly one morning he had a wonderful experience of a startling vision of what he had been seeking. The light that shorn him was the enlightenment he was searching for.

Buddha delivered his first Sermon at Benares on the banks of the river Ganges. Gautama Buddha died at the age of 80 at Kushinagar, near Benares. After him, his followers were divided into two sectors Mahayana and Hinayana. Buddhism is now followed in Myanmar, Thailand, Sri Lanka, China, Mong Korea and Japan.

Question 24.
Answer the following in a word, a phrase or a sentence each:
(a) Buddha was the title given to ______
[Fill in the blank with a suitable word from the passage.]
(b) Name the warrior community in which Buddha was born.
(c) When Buddha was young, he had _______
(a) an attachment to material delights.
(b) a philosophical temperament
(c) enjoyed worldly pleasures. [Choose the right answer]
(d) Why did the prince go out of his palace one day?
(e) Name any one of the three sights that made a deep impact on the mind of the prince.
(f) How old was the prince when he left the palace?
(g) Where did Buddha deliver his first sermon?
(h) Where did Buddha die?
(i) Mention the two sects of Buddhism.
(j) Write the name of anyone country where Buddhism is followed in the world.
Answer:
(a) Siddhartha Gautama
(b) Sakyas.
(c) (b) a philosophical temperament.
(d) One day, the prince went out of his palace to get a glimpse of the town
(e) On his way, he saw three sights which he had never seen before – a sick man, an old man and a dead man. These had a deep impact on his mind and made him sad and thoughtful
(f) 29 years old.
(g) At Benares.
(h) At Kushinagar, near Benares.
(i) Mahayana and Hinayana.
(j) Myanmar/Thailand/Sri Lanka/China/Mongolia/Korea/Japan.

V. Complete the following by filling in the blanks using the right form of the verb given in brackets. (3 × 1 = 3)

Question 26.
A fence _______ (build) around Tammanna’s land by Basavaiah. Both of them _______ (encourage) by their supporters. Tammanna ______ (advise) by his supporters about the various means available for getting back his land, Answer:
was built, were encouraged, was advised.

Question 29.
Fill in the blanks by choosing the appropriate expressions given in brackets: (2 × 1 = 2)
(put up with, to come off, as a part of)
Sheela Rani Chunkath included mobility ______ literacy drive. But neo-cyclists had to ______ vicious attacks on their character when this began.
Answer:
as a part of, put up with.

VI. Read the following passage and make notes by drawing and filling the boxes given below: (8 × 1/2 = 4)

Question 31.
Blood is the essential red fluid that is pumped by the heart through the circulatory system. It is complex in its composition and functions. Blood has two main constituents – the cells, comprising about 45% and the plasma comprising about 55%. The blood cells comprise three main types – red blood cells, white blood cells and platelets. Each type of cell has its own function in the body. The plasma is a complex colourless solution and it contains 90% of ‘.voter. It also has fibrinogen, the protein that aids in clotting. 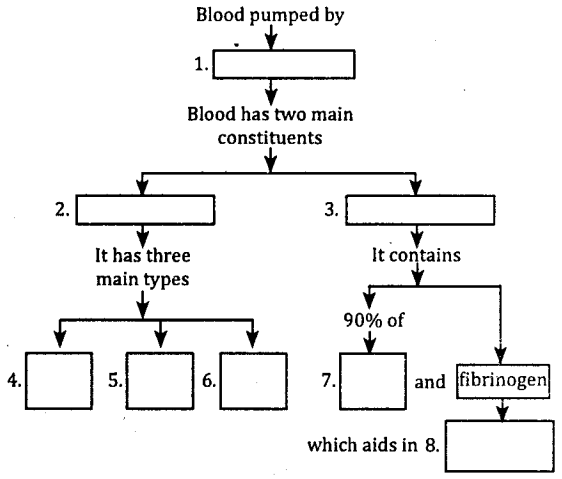 Question 33.
Imagine you are the General Secretary of your college union. On the occasion of the college day, you have to introduce the Chief Guest. The Chief Guest is Mr Rammurthy, whose profile is given below: [5]
Native place: Mysore.
Education: M.Sc., I.A.S., 1980 batch.
Served as: C.E.O. of Dharwad, D.C. of Madikeri and Uttara Kannada District.
Achievement: Clean drinking water, electricity to villages and good roads.
Interested in: Literature and Indian music.
Present post: Principal Secretary, the Dept, of Forestand Mining.
Based on the information, write a speech in about 100 words to introduce the guest at the function.
OR
The following two pie charts give a graphic representation of the area of land used for different purposes in and around Bangalore. Prepare a report in about 120 words. 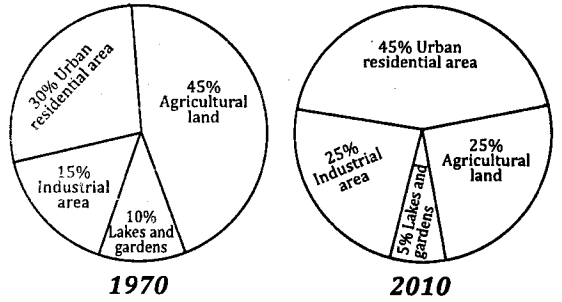