Question 1.
State the total population of the world according to 2012.
Answer:
World population as per 2012 was Seven billion.

Question 2.
What is an Industry?
Answer:
The process of conversion of raw materials into finished goods employing machinery and man power is called as industry.

Question 3.
What is Water Transport?
Answer:
The method of carrying goods and passengers on boats, ships, steamers etc on water from place to place is water transport.

Question 4.
What is a Megacity?
Answer:
Megacity is a metropolitan area with a total population of more than 10 million.

Question 6.
What is Irrigation?
Answer:
The supplying of water to the crops through various means like canals, tanks etc is irrigation.

Question 9.
Which city of India is known as Silicon Valley?
Answer:
Bengaluru is called the silicon valley of India.

Question 10.
Which is the Headquarters of South-Western Railway?
Answer:
Mumbai (Church gate).

Question 12.
Give the importance of Industries.
Answer:

Question 15.
What is Green Revolution?
Answer:
Increase in food production through the introduction of high yield crop varieties and application of modem agricultural techniques is called Green Revolution.

Question 17.
Which minerals are used for producing Nuclear Energy?
Answer:

Question 22.
What are the causes of Air pollution?
Ans:

Question 23.
Explain the importance of Human Geography.
Answer:
Scope of human Geography:
As early societies became more successful in meeting their need with in permanent settlements.

Question 24.
Explain the growth of population in the world.
Answer:

2. Second stage (Early expanding): It begins with the declining of death rate while the birth rate remains unchanged. These changes due to the advancement of science & technology, basic healthcare and education etc. At present many developing countries of Asia & Africa are in this stage.

3. Third stage (Late expanding): Death rate declines and birth rate begins to fall due to access of contraceptives, urbanization, an increase in the status and women education etc India appears to be this stage.

4. Fourth stage (Low stationary): It is characterized with low birth rate and low death rate. Growth is stationary due to changing life style, high obesity and many diseases are. caused in this stage. Japan, Sweden, Belgium Denmark & Switzerland are in this stage.

Question 26.
Explain the world distribution of Railways.
Answer:
Europe has the highest density of rail. Network in the world. It has about 4,40,000 kms of railway track.

Question 27.
Explain the factors affected on Human development Index in India.
Answer:
Factors influencing on HDI of India are discussed below:
1. Birth and Death Rate: Declining of birth rate has been much slower than that of the death rate. This results in rapid increase of population. It affects on slow economic growth of the country. It is the main cause for declining of human development index.

2. Life Expectancy: Life Expectancy has gone up 65.77 years for males 67.95 years females respectively in 2011-12. This is due to the consequence of the expansion of food security and medical facilities. It helps to raise the HDI in the country.

3. Food and Nutrition: According to the 2011 Global Hunger Index (GHI) report, India has 15th rank among the leading countries with hunger situation.

4. Literacy: Education is the key for socio-economic progress. The Indian literacy rate grew to 74.04% in 2011 from 12% at the end of the British rule in 1947. The large proportion of illiterate females is another reason for the low literacy rate in India. Due to this there is decline in the Human development Index of the country.

1. In the first stage: In this decade, population growth was naturally curbed with the outbreak of Plague, Cholera. Malaria, influenza and other epidemics. Thus the decade is considered as ‘the great divide in the history of Indian Census

2. In the second stage: The population can be considered as moderate The population • grow ing from about 251 million (1921) to 361 million (3951), an increase of about 110
million. The main reason was decline in death rate due to control of epidemics like Plague, Cholera etc.

3. The third stage: is very important, because of the growth rate of population is very high. The Population grew from .361 million (195 1) to 686 (1981). an increase of about 325 million The growth has been very rapid after independence. The government of India was implemented many Socio-Economical Programs in all sectors.

4. The fourth stage: It completely differs from other three stages. Here the trend of growth rate of population is gradually slowing down. We can easily justify that, the period from 1981 to 2011 is referred to as a high growth with definite signs of slowing down. 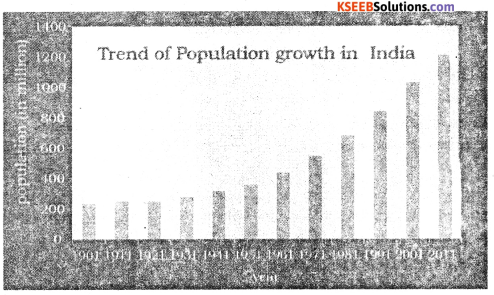 Question 29.
Explain the Canal Irrigation in India.
Answer:
India has one of the largest canal systems of the world. Canals are the second largest source of irrigation in the country.
Canals are of two types :
1. Inundation canals : taken out directly from rivers, without making any barrage or dam.

2. Perennial canals: which are taken out from the reservoirs by constructing barrage or weir to regulate the flow of water.

Objectives: The following are the main objectives of rain water harvesting.

Methods of Rain Water Harvesting :
1. In-situ method The method of percolating the rain at the point of its fall itself is called In-situ rainwater harvesting.
For example

2. Ex-situ method: This method of rainwater harvesting involves storing of running water. It is collected in check dams, huge percolation tanks etc. It is an expensive method.

Question 31.
Explain the importance of Agriculture in India.
Answer:
Agriculture is the most important Primary activity and the oldest occupation of human beings in India.

1. Gujarat: Gujarat is the largest producer of cotton in India, which is due to the better yield per hectare i.e 689 kg per hectare. Bharuch, Surendemagar, Vadodara and Ahmedabad are the important cotton growing districts.

2. Maharashtra: Maharashtra ranks first in cotton growing area and it stands second in the production of raw cotton in the country. Over 80% of its cotton production comes from Khandesh, Vidarbha and Marathwada regions.

3. Andhra Pradesh: It is the third largest producer of cotton in India. The leading cotton producing districts are Guntur, Prakasam, Adilabad, Kurnool and Anantapur.

4. Haryana: Haryana stands in the fourth place of cotton production in India. It has the highest yield per hectare of cotton in the country i.e. 703 kg. Gurgoan, Hissar, Rohtak and are the major districts.

Question 33.
Explain the various types of roads in India.
Answer:
Classification of roads: In India, roads are of the following types.

Besides these, there are border roads and International highways linking major Indian cities with the capitals of other neighbouring countries.

2. North – South and East-West corridors: This project connects Srinagar (JK) in the North with Kanyakumari (TN) in the South and Silcher (Assam) in the East with Porbandar (Gujarat) in the West covering major cities along the way. The project has a total length of 7300 km.

3. Port connectivity project: This is also included in the programmes of NHAI. This project connects the Golden Quadrilateral roads with the 13 major ports (380 km) and other projects (962 km). This is still in progress.

5. District roads: These roads connect the production and marketing centres with the highways, railways, towns and larger villages with the district headquarters. The Zilla Parishad takes the responsibility of the development and maintenance of these roads.

6. Village roads: Roads which link the taluk headquarters with villages and the district highways are called village roads. They are mostly untarred or metalled. They are constructed and maintained by Taluk Panchayats and Village Panchayats.

The Power resources other than the traditional fossil and Mineral sources are known as ‘Non Conventional Power Resources’. They include Solar energy, Wind energy, Bio-gas, Sea waves, Biomass and geo-thermal etc. These reasources are inexhaustible and renewable in nature.
Importance :

Question 36.
Explain the localization factors of industries.
Answer:
Some important factors are:

Question 37.
Represent the following data by a Pie diagram 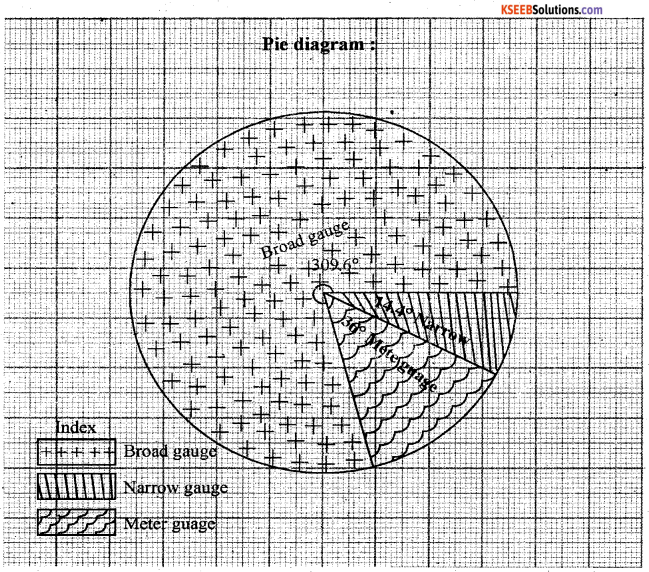 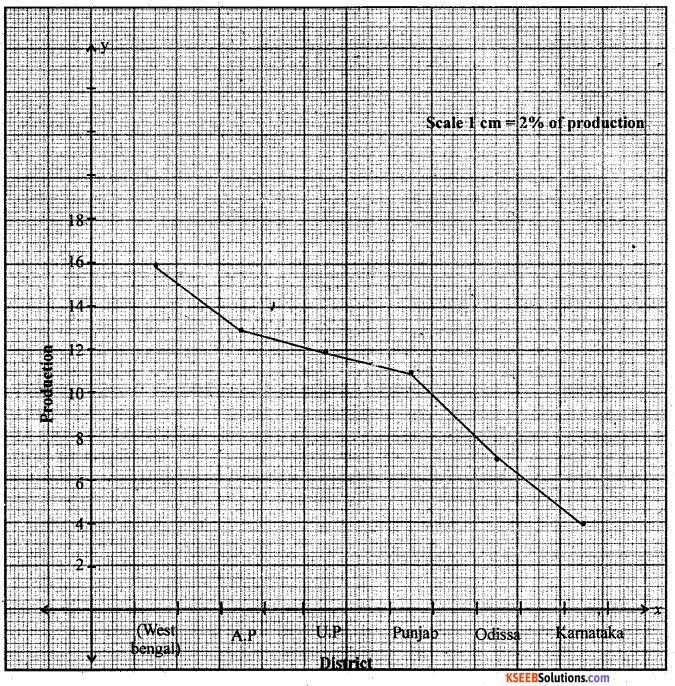 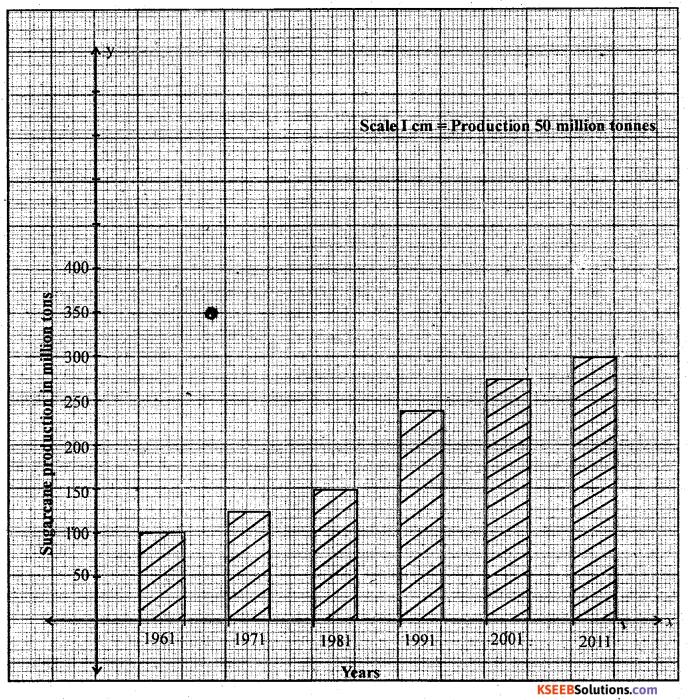 (a) Write the importance of Remote Sensing.
(b) Explain the functions of GIS.
(c) Explain the functions of GPS.
Answer:
(a) Remote sensing is the science and art of obtaining information about an object, area or phenomenon through the analysis of data acquired by a device that is not in contact with it. This is done by sensing and recording reflected or emitted energy and processing, analyzing and applying that information.

In much remote sensing, the process involves an interaction between incident radiation and the targets of interest. This device can be a camera or a bank of sensors operated from an airplane or a satellite. Though satellite we can collect date related agriculture, forest, urban land use, water, natural calamities etc the satellite data is based for mapping, monitoring, studying the various phenomena related to earth’s surface. –

2. Storing data: Geographical data once captured, it needs to transform from Analogy into digital format and to be stored in computer for further analysis.

3. Query: Once you have a functional GIS containing your geographical information, you can begin to ask a simple questions.

4. Analysis: There are 3 types

5. Display: Once analysis is done maps, diagrams, graphs and tables are to be designed and same has to be displayed over computer moniter.

6. Output: This is final, stage of GIS function where in the maps, data tables etc… can be printed to have hard copy as output.

(c) There are three segments of GPS:-
1. The space segments : The satellites of GPS are launched and positioned at an altitude of approximately 20200 km which is almost more than three times of the earth’s radius. The space segment consists of a constellation of 24 functioning GPs satellites located in 6 orbital plane with 4 satellites in each orbital plane. The time for the satellite to complete
one revolution around the earth is 11 hrs and 58 minutes.

2. The control segment: The control segment consists of facilities necessary for satellites especially healthy monitoring, telemetry, tracking command and control clock error ‘ computation .of satellites. There are 5 GPS stations spread over the earths surface they arc

3. The user segment: It is a total user and supplier community, both civilian and military. The user segment consists of all earth – based GPS receivers. Receivers very greatly in size and complexity, through the basic design in rather simple. The space and control segments are largely transparent to the operations of navigation functions.

1. Navigation: In navigation, by using GPS can save countless hours in the field. Any feature, even if it is under water, can be located upto one hundred meters simply by scaling coordinates from a map, entering way points & going directly to site.

2. Remote sensing and GIS: GPS positioning can be integrated into remote – sensing methods such, as Photogrammetry and aerial scanning, magnetometry, and video technology using DGPs techniques. ,

3. Surveying/Mapping: The high precision of GPS carries phase measurements, together with appropriate adjustment algorithum, provides an adequate tool for a variety of tasks for surveying and mapping.