Question 2.
What is meant by Animal Rearing?
Answer:
Domestication of animals for a specific purpose such as milk, meat, bones, skins, hair and wool is known as Animal Rearing.

Question 4.
What is a city?
Answer:
It is a Urban center with 1 lakh and more population and larger than the town is called a city.

Question 10.
What do you mean by communication?
Answer:
Communication refers to exchange of ideas, messages, information from one person to another person.

II. Answer any ten questions in 2 to 3 sentences each:

Question 12.
Bring out the importance of secondary occupation.
Answer:

Question 15.
Name the varieties of wheat in India.
Answer:

Question 17.
What are the purposes of solar energy?
Answer:

Question 18.
Name the places where software technology parks are located in Karnataka.
Answer:

Question 21.
What are the causes of water pollution?
Answer: 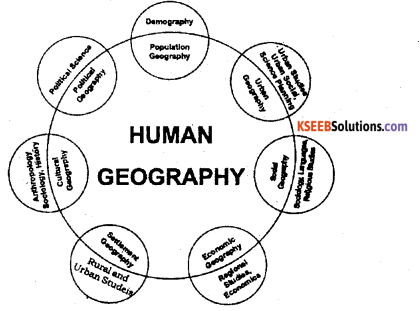 1. Economic Geography: It deals with the study of influence of Geographical factors on the economic activities man like agriculture, industries, transport etc.

2. Political Geography: It deals with the influences of geographical environment on political aspects such as states nations & boundaries etc.

4. Cultural and Social Geography: It helps us to study the cultural evolution, distribution, age, structure and social life of the world.

Question 24.
Discuss the measurement of human development.
Answer:
Meaning of Human development:
Human development is “development that enlarges people’s choice and improves their lives”. Standard of living & where people can live meaningful lives. Such as healthy, able to develop their talent, Participate in the activities of society etc.

1. The Human development index: It is measured in three dimensions.

2. The Human poverty index: It measures the short fall in human development in following indices.

Measurements to Control the population:

3. Age structure – On the basis of the age the entire population is divided into three major categories namely infants (0-14 year). Adults (15-59 years) and aged group (above 60 years).

(a) Rural to Rural: This is estimated that about 65.2% of total migration is of this category’.

(c) Urban to Urban: Generally, people like to move from small town with less facility to large cities with more facilities.

(d) Urban to Rural: Urban areas are usually affected by the pollution.

Question 29.
Explain the main objectives and importance of Bhakra-Nangal project.
Answer:
1. The Bhakra – Nangal Project is a joint venture of Punjab, Haryana and Rajasthan. It has been named after the two dams constructed at Bhakra and Nangal on the Sutlej river in Himachal Pradesh.

Question 30.
Discuss about the Rainwater harvesting.
Answer:
1. Controlling the runoff of rain water and make it to perculate to increase ground water table for future purpose.

2. It involves collection and storage of rainwater at surface or in sub-surface aquifier, before it is lost as surface runoff. It not only increases water availability but also checks the declining water table.

Objectives: The following are the main objectives of rain water harvesting.

Methods of Rain Water Harvesting :
1. In-situ method The method of percolating the rain at the point of its fall itself is called In-situ rainwater harvesting.
For example –

2. Ex-situ method: This method of rainwater harvesting involves storing of running water. It is collected in check dams, huge percolation tanks etc. It is an expensive method.

Question 31.
Given an account on floriculture in India.
Answer:

Question 32.
Give an account of the production and distribution of rice in India.
Answer:
Rice Cultivation is widely distributed in India. Its cultivation is concentrated in River valleys, deltas, flood plains, low lying coastal areas of North-Eastern & Southern India etc are important rice growing areas. 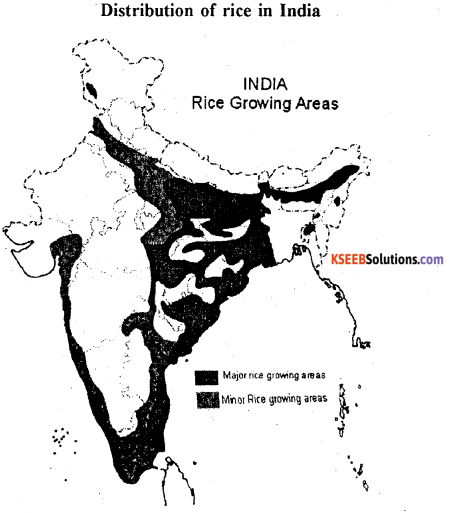 1. West Bengal: West Bengal is the largest producer of rice in India.

2. Uttar Pradesh : This is second largest producer of rice in India.

3: Andhra Pradesh : It is the third largest producer of rice in India.

4. Punjab : Punjab is the fourth largest producer of rice in India.

5. Bihar : Bihar is fifth leading producer of rice in India.

6. TamilNadu: It is the sixth largest producer of rice in India.

7. Chattisgarh : It is the important producer of rice in country.

Production of rice : India is the second largest producer of rice in the world next to the China. It produceses 104.3 million tonnes of rice during 2011-12, it accounts for 22% of the worlds production. Now India is self sufficient in rice production.

Question 33.
Explain any two major ports of west coast in India.
Answer:
The major ports located in the west coast of India are (a) Kandla (b) Mumbai.

(a) Kandla : It is a tidal port located at Eastern end of Gulf of Kachchh (Gujarat).

(b) Mumbai: Mumbai is the biggest, most spacious, natural, well shelter, and capital of the Maharashtra state.

Question 35.
Describe the non-conventional energy resources in India.
Answer:
The Power resources other than the traditional fossil and Mineral sources are known as ‘Non Conventional Power Resources’. They include Solar energy, Wind energy, Bio-gas, Sea waves, Biomass and geo-thermal etc. These reasources are inexhaustible and renewable in nature.
Importance :

Question 36.
Give an account of Iron and Steel Industry in India.
Answer:
Importance:

Distribution:
There are nine major Iron and Steel industries in India.
1. Tata Iron and Steel Company (TISCO), Jamshedpur :- It was established in 1907. It was the first largest steel plant of the country.

2. Vishveswariah Iron and Steel Co. Ltd (VISL) Bhadravathi 11 was first estab¬lished in 1923 by the princely state of Mysore located at Bhadravathi in Shimoga district of Karnataka.

3. India Iron and Steel Company Ltd (IISCO) Bunpur:- It was established in 1919 at Bumpur in West Bengal. It was the second largest integrated steel plant after Tata Iron and Steel Ltd.

4. Hindustan Steel Company Ltd, Rourkela :- It was completed with the German collaboration. The steel plant was commissioned in 1955.

5. Bhilai Steel Plant:- It has the largest steel production plant of the public sector. It is located at Bilai near Raipur in Chhatisgarh.

6. Durgapur Steel Plant:- The steel plant in Durgapur in West Bengal was established with British collaboration and was commissioned in 1956.

7. Salem Steel Plant:- It is located at Salem in TamilNadu and the production was started from 1982.

Question 37.
Construct a Pie-Diagram by using data given in the table.
India: Source of Irrigation – 2011 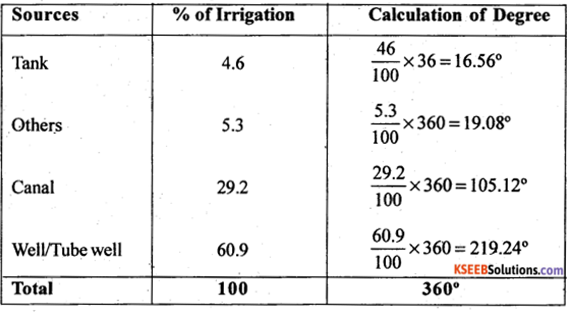 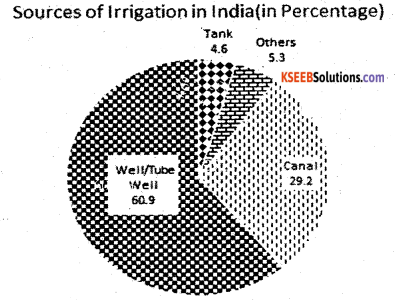 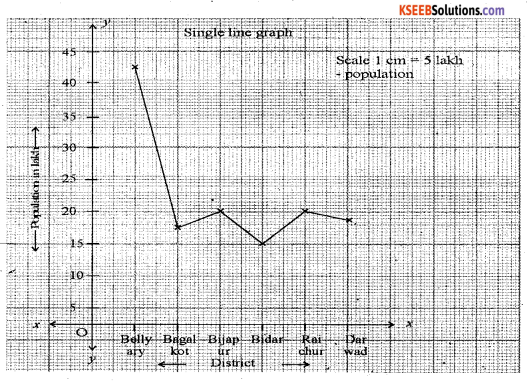 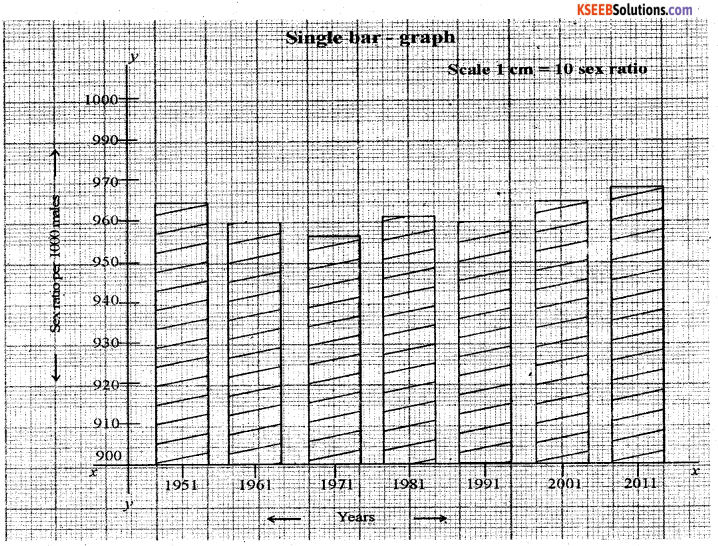 Question 40.
Answer any two of the following questions: (2 × 10 = 20)
(a) Explain the sources of Data.
(b) Explain the functions of G1S.
(c) Explain the functions of GPS.
Answer:
(a) Meaning – The data which are collected for the first time by a researcher or groups of researchers, institution or organizations are called Primary sources of data.
Types of Primary data collection:-
1. Through Personal interview: Personal interviews are the most commonly used method of collecting data, because the interviewer has the opportunity of explaing the study and answering any question, here the researcher gets direct information from the respondents.

2. By Personal observations: It refers to the collection of data or information by individual or group of individuals, through direct observations in the field.

Meaning – The data those have been collected and analyzed already by some departments, organizations, NGO’s etc… are called Secondary data.
Types of Secondary sources of data
1. Published sources – There are 5 types

2. Unpublished sources – There are 3 types.

(b) 1. Capture data: Geographical data can be collected/captured from various sources like hard copy, map through tophosheet, digital data, through GPS, Secondary data through published tables.

2. Storing data: Geographical data once captured, it needs to transform from Analogy into digital format and to be stored in computer for further analysis.

3. Query: Once you have a functional GIS containing your geographical information, you can begin to ask a simple questions.

5. Display: Once analysis is done maps, diagrams, graphs and tables are to be designed and same has to be displayed over computer moniter.

6. Output: This is final, stage of GIS function where in the maps, data tables etc…. can be printed to have hard copy as output.

(c) There are three segments of GPS:-
1. The space segments: The satellites of GPS are launched and positioned at an altitude of approximately 20200 km which is almost more than three times of the earth’s radius. The space segment consists of a constellation of 24 functioning GPs satellites located in 6 orbital plane with 4 satellites in each orbital plane. The time for the satellite to complete one revolution around the earth is 11 hrs and 58 minutes.

2. The control segment: The control segment consists of facilities necessary for satellites especially healthy monitoring, telemetry, tracking command and control clock error ‘ computation .of satellites. There are 5 GPS stations spread over the earths surface they arc

3. The user segment: It is a total user and supplier community, both civilian and military. The user segment consists of all earth – based GPS receivers. Receivers very greatly in size and complexity, through the basic design in rather simple. The space and control segments are largely transparent to the operations of navigation functions.

1. Navigation: In navigation, by using GPS can save countless hours in the field. Any feature, even if it is under water, can be located upto one hundred meters simply by scaling coordinates from a map, entering way points & going directly to site.

2. Remote sensing and GIS : GPS positioning can be intergrated into remote – sensing methods such, as Photogrammetry and aerial scanning, magnetometry, and video technology using DGPs techniques.

3. Surveying/Mapping: The high precision of GPS’ carries phase measurements, together with appropriate adjustment algorithum, provides an adequate tool for a variety of tasks for surveying and mapping.