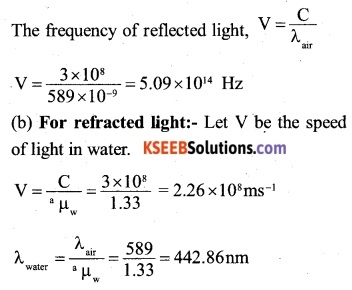 The frequency is a inherent characteristic of radiation. It does not change on refraction.
∴ Frequency of the refracted light = 5.09 x 1014Hz.

(b) The speed of light in glass is not independent of the colour (wavelength) of light of the two, violet light travels slower in a glass prism.

Question 4.
In a Young’s double-slit experiment, the slits are separated by 0.28 mm and the screen is placed 1.4 m away. The distance between the central bright fringe and the fourth bright fringe is measured to be 1.2 cm. Determine the wavelength of light used in the experiment.
Answer: 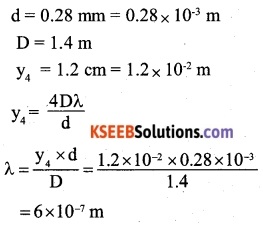 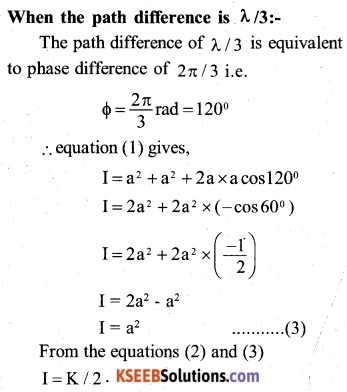 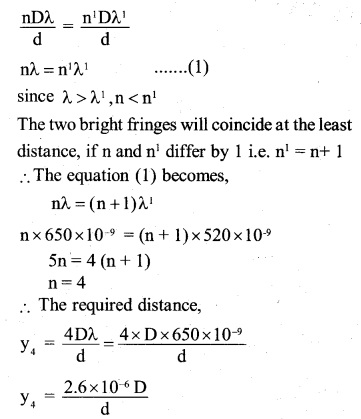 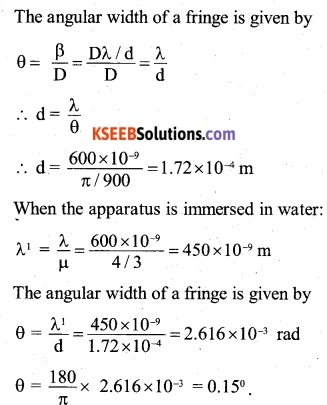 The negative sign shows that the star is receding. 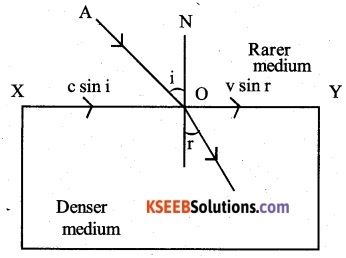 According to Newton’s corpuscular theory, the light corpuscles experience a force of attraction due to the denser medium, which acts along normal to the interface X Y. Obviously, the component of their velocities before and after the refraction along X Y must remain the same. 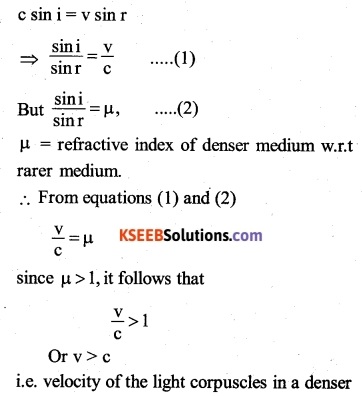 medium is greater than that in a rarer medium. This result of the corpuscular theory is against the experimental result and therefore this theory was discarded. On the basis of Huygen’s wave theory, the phenomenon of refraction can be easily explained and it can be proved that c >v. Therefore, wave picture of light is consistent with experimental result.

Question 13.
You have learnt in the text how Huygens’ principle leads to the laws of reflection and refraction. Use the same principle to deduce directly that a point object placed in front of a plane mirror produces a virtual image whose distance from the mirror is equal to the object distance from the mirror.
Answer:
Consider that a point object O is placed in front of a plane mirror x y and a spherical wavefront APB originating from the object is incident on the mirror as shown in figure 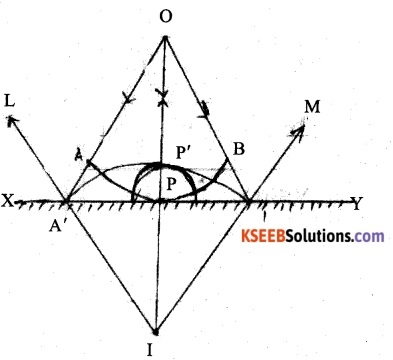 The lines OA, OP and OB (normal to the incident wavefront APB at the points a’ P
and B) represent the incident rays. Since the distance OP is smaller than O a’ or OB’ > the disturbance will reach the point P earlier than it reaches the points a’ and b’ on the mirror.

(b) Dependence of the speed of light in a medium:

Question 15.
For sound waves, the Doppler formula for frequency shift differs slightly between the two situations:
(i) source at rest; observer moving, and
(ii) source moving; observer at rest. The exact Doppler formulas for the case of light waves in vacuum are, however, strictly identical for these situations. Explain why this should be so. Would you expect the formulas to be strictly identical for the two situations in case of light travelling in a medium?
Answer:
Doppler effect for sound waves is asymmetric i.e. for the same relative motion in the cases (i) and (ii), the apparent change in the frequency is not the same. It is because, sound waves require a medium for their propagation and the motion of the observer relative to the medium is different in two cases.

Question 16.
In double-slit experiment using light of wavelength 600 nm, the angular width of a fringe formed on a distant screen is 0.1°. What is the spacing between the two slits?
Answer: 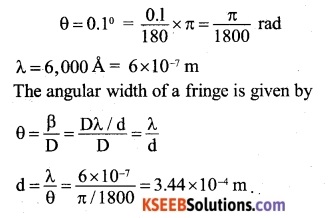 (a) In a single slit diffraction experiment, the width of the slit is made double the original width. How does this affect the size and intensity of the central diffraction band?
(b) In what way is diffraction from each slit related to the interference pattern in a double-slit experiment?
(c) When a tiny circular obstacle is placed in the path of light from a distant source, a bright spot is seen at the centre of the shadow of the obstacle. Explain why?
(d) Two students are separated by a 7 m partition wall in a room 10 m high. If both light and sound waves can bend around obstacles, how is it that the students are unable to see each other even though they can converse easily.
(e) Ray optics is based on the assumption that light travels in a straight line. Diffraction effects (observed when light propagates through small apertures/slits or around small obstacles) disprove this assumption. Yet the ray optics assumption is so commonly used in understanding location and several other properties of images in optical instruments. What is the justification?
Answer:
(a) The width of central maximum
\(\frac { 2D\lambda }{ a } \)
If the width of the slit
(a) is made double of the original, the width of the central diffraction band will reduce to half. The intensity of the central diffraction band coil become four times.

(b) The intensity of interference fringes in young’s double slit experiment is superposed by the diffraction pattern of each slit.

(c) The central bright spot is produced due to the constructive interferences of the waves from the edge of the circular obstacle.

(e) In optical instruments, the sizes of the aperture is very large as compared to the wavelength of the light used. As such, the diffraction of light wave is of no significance.

Question 18.
Two towers on top of two hills are 40 km apart. The line joining them passes 50 m above a hill halfway between the towers. What is the longest wavelength of radio waves, which can be sent between the towers without appreciable diffraction effects?
Answer:
The hills will not obstruct the transmitted radio waves, if over the halfway distance (Zf) between the hills, the spreading of the signal is limited to the distance (a) of the line of sight from the hills. 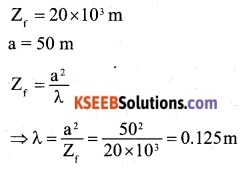 Question 19.
A parallel beam of light of wavelength 500 nm falls on a narrow slit and the resulting diffraction pattern is observed on a screen 1 m away. It is observed that the first minimum is at a distance of 2.5 mm from the centre of the screen. Find the width of the slit.
Answer:
λ= 500nm = 500 x 10-9m
D = 1m
The distance of first minimum from the centre of the screen,

(a) When a low flying aircraft passes
overhead, we sometimes notice a slight shaking of the picture on our TV screen. Suggest a possible explanation.

(b) As you have learnt in the text, the principle of linear superposition of wave displacement is basic to understanding intensity distributions in diffraction and interference patterns. What is the justification of this principle?
Answer:
(a) A low flying aircraft reflects the TV signal. Due to interference between the direct signal and the reflected signal, the picture on TV screen shows a slight shaking.

Question 21.
In deriving the single slit diffraction pattern, it was stated that the intensity is zero at angles of n%/a. Justify this by suitably dividing the slit to bring out the cancellation.
Answer:
Divide the slit of width an into n parts, so that the width of each small part of the slit is

Question 1.
Two coherent sources, whose intensity ratio is 10: 1 produce interference fringes. Calculate the ratio of intensity of maxima and minima in the fringe system.
Answer: 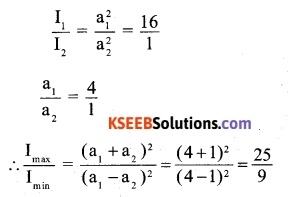 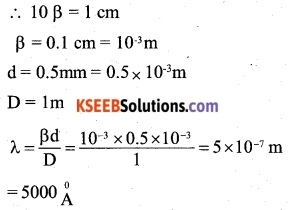 Question 3.
Determine the angular separation between central maximum and first order maximum of the diffraction pattern due to a single slit of width 0.25mm, when light of wavelength 5890 Å is incident on it normally.
Answer:

Question 4.
Two spectral lines of sodium D1 and D2 have wavelengths of approximately 5,890 and 5896 Å sodium lamp sends incident plane wave on a slit of width 2 x 106 m. A screen is located 2m from the slit. Find the spacing between the first maxima of two sodium lines as measured on the screen.
Answer:
The distance of first secondary maxima from the centre of screen, 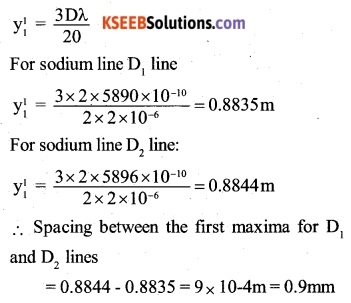 Question 5.
Colours appear on a thin soap film and soap bubbles due to the phenomenon of
(A) interference
(B) scattering
(C) diffraction
(D) dispersion
Answer:
(A) interference 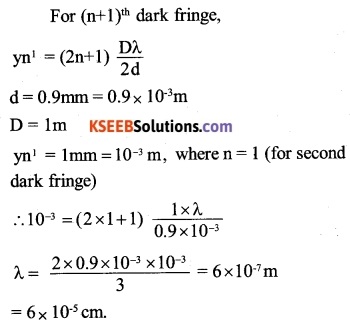 Question 9.
For the relaxed eye, the magnifying power of microscope is.