Question 1.
A small candle, 2.5 cm in size is placed at 27 cm in front of a concave mirror of radius of curvature 36 cm. At what distance from ’ the mirror should a screen be placed in order to obtain a sharp image? Describe the nature and size of the image. If the candle is moved closer to the mirror, how would the screen have to be moved?
Answer: 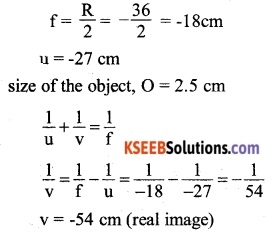 Therefore, the screen should be placed at a distance of 54cm from the mirror on the same side as the object,

Question 2.
A 4.5 cm needle is placed 12 cm away from a convex mirror of focal length 15 cm. Give the location of the image and the magnification. Describe what happens as the needle is moved farther from the mirror.
Answer: 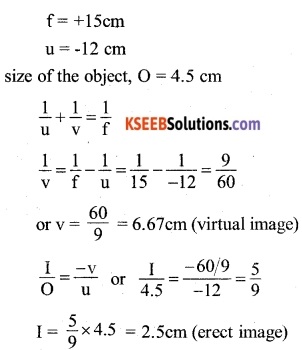 Question 3.
A tank is filled with water to a height of 12.5 cm. The apparent depth of a needle lying at the bottom of the tank is measured by a microscope to be 9.4 cm. What is the refractive index of water? If water is replaced by a liquid of refractive index 1.63 up to the same height, by what distance would the microscope have to be moved to focus on the needle again?
Answer:
When tank is filled with water :
Real depth = 12.5cm
Apparent depth = 9.4cm 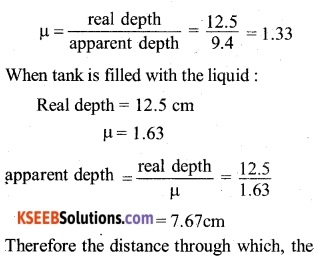 Therefore objective and eyepiece should be placed at 11,67cm apart and object at a distance of 1,5cm from the objective.

(b) When the image is formed at least distance of distinct vision, then 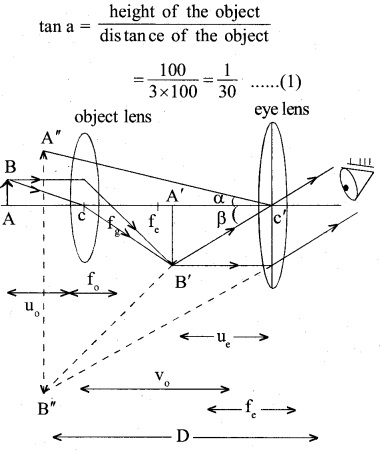 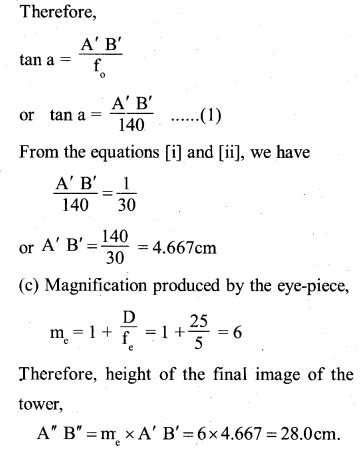 Question 6.
A Cassegrain telescope uses two mirrors as shown in Fig. 9.33. Such a telescope is built with the mirrors 20mm apart. If the radius of curvature of the large mirror is 220mm and the small mirror is 140mm, where will the final image of an object at infinity be?
Answer: 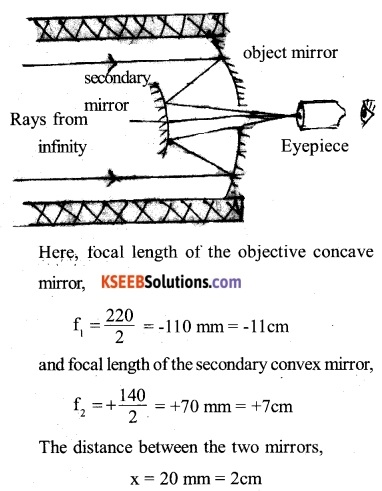 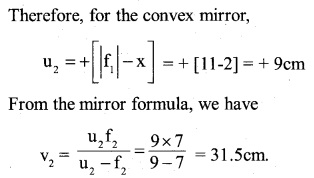 Question 7.
Light incident normally on a plane mirror attached to a galvanometer coil retraces backwards as shown in Fig. 9.36. A current in the coil produces a deflection of 3.5o of the mirror. What is the displacement of the reflected spot of light on a screen placed 1.5 m away? 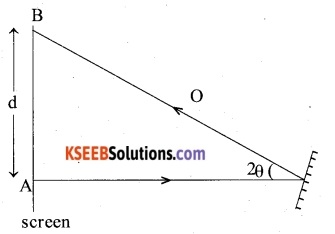 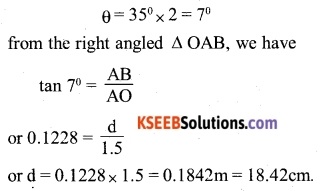 Question 8.
Figure 9.37 shows an equiconvex lens (of refractive index 1.50) in contact with a liquid layer on top of a plane mirror. A small needle with its tip on the principal axis is moved along the axis until its inverted image is found at the position of the needle. The distance of the needle from the lens is measured to be 45.0cm. The liquid is removed and the experiment is repeated. The new distance is measured to be 30.0cm. What is the refractive index of the liquid?
Answer: 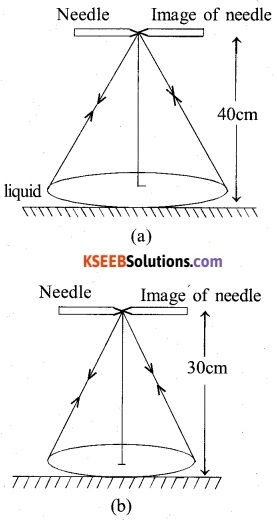 The liquid between the convex lens and the plane mirror behaves as a plano-concave lens. Let f1 and f2 be the focal length of the convex lens and the liquid plano-concave lens. In the arrangement as shown in. Figure (b) as the needle and its image coincide with each other, the rays of light retrace their path. Therefore, the rays of light after refraction through the lens are falling normally on the plane mirror. It can happen so, if the needle lies at the focus of the convex lens. Hence, f, = 30cm From the lens maker’s formula, we have 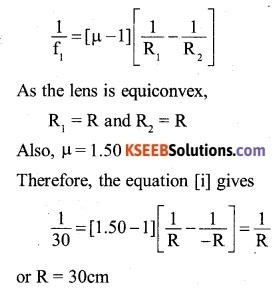 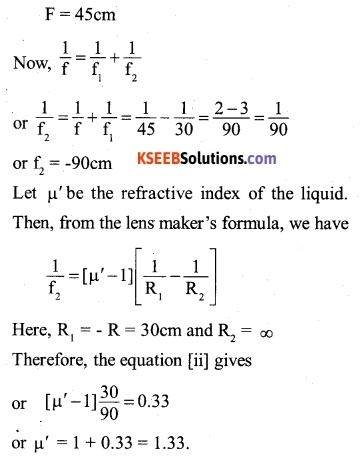 Question 1.
Why is that sun-glasses (gaggles), which has curved surface, do not have any power?
Answer:
The two surfaces of the goggle lens are parallel i.e. possess same radii of curvature. Since one surface is convex and other equally concave, the powers of the two surface is equal but of opposite signs. The total power of the goggle lens (p’) is the algebraic sum of the powers of the individual surfaces
p’ =p1 +p2 =p+(-p) = 0 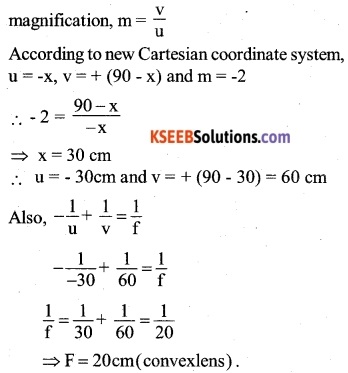 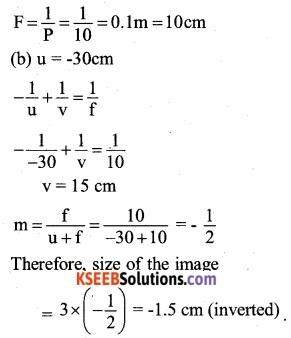 Question 4.
A glass prism has a minimum angle of deviation 5 in air. State with reason, how the angle of minimum deviation will change, if the prism is immersed in a liquid of refractive index greater than 1.
Answer:
We know that for a glass prism placed in air,

when prism is immersed in a liquid of refractive index greater than 1, its refractive index w.r.t liquid will become less than p. From the above relation, it follows that the angle of minimum deviation will decrease.

Question 10.
Two mirrors are kept at 60° to each other and a body is placed at middle. Total number of images formed is
(A) six
(B) four
(C) five
(D) three
Answer:

Question 11.
Two thin lenses of power +5D and -3D are in contact. What is the focal length of the combination (CBSE 2001)
Answer:

Question 13.
For which wave length is eye the most sensitive.
Answer:
5500 A 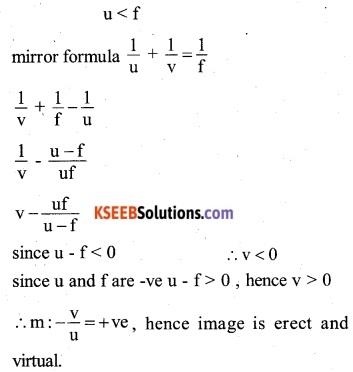 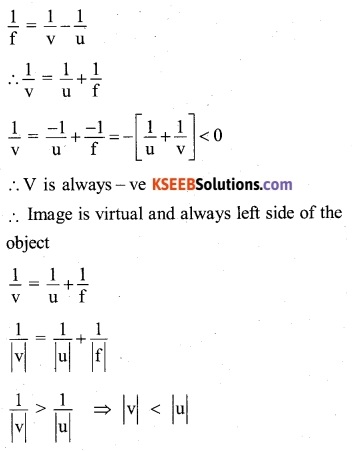 magnification is less than 1 hence image is virtual and diminished