Colours of Silence Lesson Summary in English and Kannada

Painter, Sculptor, Muralist, Architect & Writer Satish Gujral is described as a living legend; one of the few who have consistently dominated the art scene in India for entire post-independent era. He has won an equal, if not more, acclaim as an architect.

His building of the Belgium Embassy in New Delhi has been selected by the international Forum of architects as one of the one thousand best built in the 20th century round the world. Citizens of New Delhi had honoured Gujral as one of its 25 citizens who in the last 50 years, brought the city on the world map. The Republic of India honoured him with the second highest National Award, “Padma Vibhushan”.

Satish Gujral was born in the year 1925 in the pre-partition West Punjab. At the tender age of eight, an illness fatally impaired his hearing. In 1939, Satish joined the Mayo School of Art in Lahore to study Applied Arts. In 1944, he moved to Bombay (now Mumbai) and took admission in the Sir J.J. School of Art.

During his stay at the college, which lasted from 1944 to 1947, he came into contact with the Progressive Artists Group. However, he found it difficult to agree with their techniques and started looking for a kind of modernism, with its roots in the Indian traditions. In 1947, a recurring sickness forced Satish Gujral to drop out of J.J. School of Art. He left for Mexico in the year 1952, on a scholarship, for an apprenticeship with Diego Rivera and David Sequeiros.

There, his work got heavily influenced by the suffering of the people who lost their homes and families because of the partition of the country. Slowly, Satish started diversifying his sculptural materials with machined industrialized objects in steel, copper, glass, etc. and even tried junk sculptures.

Since the late 1980s, the paintings and sculptures of Satish Gujral have shown a greater expansion, both in terms of materials as well as content. He started making large murals, mostly in mosaic and ceramic tiles. Later, machined steel elements overtook the tiles. Satish Gujral’s sculptures in burnt wood come across as visceral exposure of human and other forms.

Recognition: Satish Gujral has received the following awards in recognition of his vital contribution in the field of art:

Achievements (Mexico)
In this inspiring story of Satish Gujral, we come to know his childhood and the problems he faced later his achievement in the field of art and literature. It is suggestive that physical disability is no barrier to success.

In the first part, we come to know that Satish met with an accident when he went hiking with his father. He had multiple fractures and was confined to bed. It affected his hearing so he talks with his friend Surender.

Later the school authorities told Avtar Narain (father of Satish) to take the boy out of school but his father was bent on giving him education but it was in vain. He brought some books for his boy and he read it.

One day he saw a bird and observed its movements. He notebook and pencil and sketched the bird. Like this he developed the interest in painting. But his father was not happy initially but the mother supported him. One day he was mixing colors and he was aware of his father standing at the door and continued with his mixing. Then the father understood the real talent of Satish and brought paints, brushes of all shapes and drawing sheets. He encouraged him and the boy was very happy. This boy is none other than Satish Gujral. 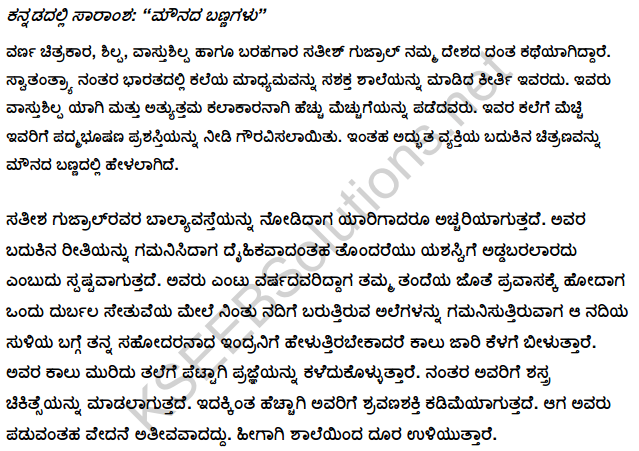 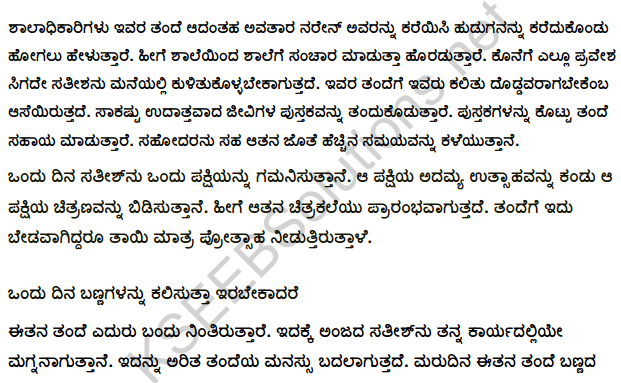 Colours of Silence Lesson About the Author