I. Answer the following questions in two or three sentences each:

Question 1.
What do you think were the simple things done by the cowboy?
Answer:
Cowboys tend to their herd of cattle, on horseback along with a dog. They take care of the livestock in the ranch. Feeding, branding, moving cattle and horses to different pastures, exercising and training horses, taking cattle for grazing, rounding them up afterwards, maintaining the fences around the ranch, so that animals do not escape and wild animals like coyotes, wolves and foxes do not enter and prey on the livestock, are some of the daily chores of a cowboy. They enjoy their spare time if any, at rodeos or with friends.

Question 2.
Do you enjoy reading? What do you feel are the joys of reading?
Answer:
Yes, I enjoy reading. We are taken into the world mentioned in the book along with our imagination and fantasy.

Question 3.
Where do the Eskimos live?
Answer:
Eskimos live in the cold Arctic region. They live in houses made of ice called igloos.

Question 4.
Why does the poet say ‘ my fantasy was all aglow’?
Answer:
While reading the book about Eskimos, the poet got so drawn into their world of adventure that he imagined fishing and hunting with them. As he shared their adventure his fantasy was at the height of his imagination.

Question 5.
When did the poet go to the moon? Did he stay there?
Answer:
The poet went to the moon while reading a book on the journey to the moon written by Jules Verne. No, he did not stay there.

Question 8.
What happened when he grew up? What are his feelings towards life?
Answer:
When the poet grew up, his childish world came to an end. He developed a serious attitude towards life.

Question 9.
What is the message given by the poet in the poem?
Answer:
The message of the poet in this poem is that reading is a good habit, for it not only enhances our knowledge but makes our imagination run wild. He also states that he had thoroughly enjoyed the mysterious facts of the world and still cherishes them.

III. Read the poem carefully and complete the web chart:

a. Use your imagination and fill in the chart given below:

Suppose you are given an opportunity to spend a few days at one of the following with your friends. Then, describe your experience to your classmates. Sample write ups are given for two, for others, form groups ‘and come up with points. Class Activity

1. Antarctica: It was a great experience to be in the southern most tip of the world. It is totally surrounded by sea and it is so calm. It is so cold and windy. The temperature is -80 to -90 degrees. There is no permanent human population here. Only research centers are found here. Emperor penguins are a common feature. Plants like the lichens, moss are found here. The ice caps are melting due to global warming. 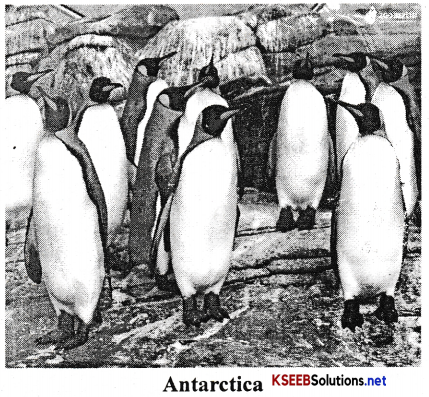 2. Igloo – Igloos are also called snow houses. They are the homes of the Eskimos. Basically, they are shelters constructed from blocks of compacted snow, generally in the form of a dome. But other types of houses constructed from whalebone and hides and traditional tents have snow used
to insulate the homes, thereby increasing the temperature to about -7 degrees while the temperature outside would be about – 45 degrees. We were there as part of a science expedition. I made friends with some Eskimo kids. We used sign language to communicate. They took me for fishing. We cut round holes in the ice and dropped our lines and caught some fish. 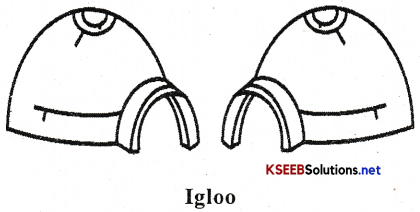 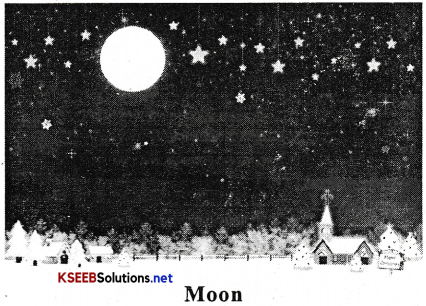 4. Sahara desert – The Sahara is the largest desert on the African continent. The southern border of the Sahara is marked by a band of semi-arid savanna called the Sahel; south of the Sahel lies Southern Sudan and the Congo River Basin. Most of the Sahara consists of rocky hamada. 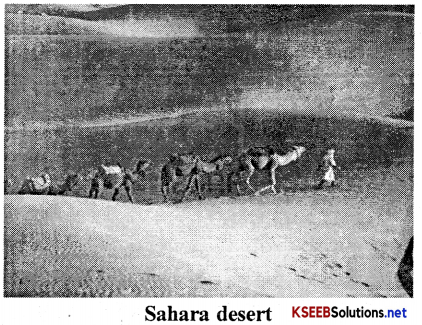 5. African jungles -The continent is surrounded by the Mediterranean Sea to the north, both the Suez Canal and the Red Sea along the Sinai Peninsula to the northeast, the Indian Ocean to the southeast, and the Atlantic Ocean to the west. The continent includes Madagascar and various archipel agoes. It has 54 fully recognized sovereign states (‘Countries’), 9 territories and three de facto states with limited recognition. 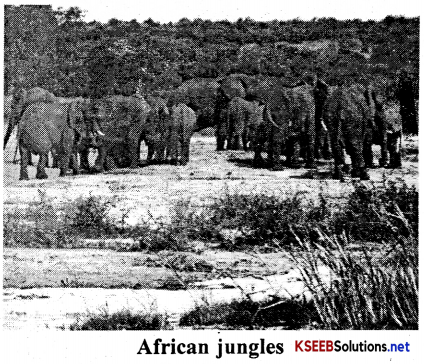 The climate of Africa ranges from tropical to sub arctic on its highest peaks. Its northern half is primarily desert or arid, while its central and southern areas contain both savanna plains and very dense jungle (rainforest) regions. In between, there is a convergence where vegetation patterns such as sahel, and steppe dominate. Africa is the hottest continent on earth; dry lands and deserts comprise 60% of the entire land surface. The record for the highest temperature recorded was set in Libya in 1922. (58 °C(136 °F)).

6. Arctic ocean: The Arctic Ocean, located in the Northern Hemisphere and mostly in the Arctic north polar region, is the smallest and shallowest of the world’s five major oceanic divisions. The Inter national Hydrographic Organization (IHO) recognizes it as an ocean, although some oceanographers call it the Arctic Mediterranean Sea or simply the Arctic Sea, classifying it as one of the mediterranean seas of the Atlantic Ocean. Alternatively, the Arctic Ocean can be seen as the northernmost part of the all-encompassing World Ocean. 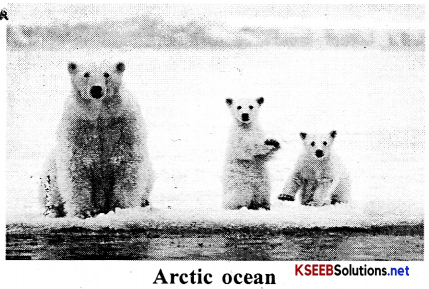 Almost completely surrounded by Eurasia and North America, the Arctic Ocean is partly covered by sea ice throughout the year and almost completely in winter. The Arctic Ocean’s temperature and salinity vary seasonally as the ice cover melts and freezes; its salinity is the lowest on average of the five major oceans, due to low evaporation, heavy fresh water inflow from rivers and streams, and-limited connection and outflow to surrounding oceanic waters with higher salinities.

The summer shrinking of the ice has been quoted at 50%. The US National Snow and Ice Data Center (NSIDC) uses satellite data to provide a daily record of Arctic sea ice cover and the rate of melting compared to an average period and specific past years.

Question 2.
To escape the drudgery of daily grind, the poet
(a) went to the rodeo
(b) went with the pirates
(c) painted pictures
(d) read books
Answer:
(d) read books

III. Mention the figure of speech of :

Imagination runs wild when we read books; and we learn many facts of nature as we share with the experiences of the characters in the books. In this poem, the poet highlights the pleasure derived while reading.

The poet talks about the distant and varied lands that one is led to, and the imagination that is honed while reading books. The poet became a pirate and sailed the seven seas and shared their thrilling adventure on the seven seas. He then became a cowboy and roamed about ¡n the ranch and did many simple things that pleased him. He even went up to the Arctic and lived with the Eskimos in their igloos and took part in their hunting and fishing expeditions making his fantasy glow.

While he read the book about the journey to the moon by Jules Verne, the poet too had an exciting and adventurous journey to the moon. He then spent some time with Dr. Livingstone, exploring the forests of Africa. Later he shared some adventure with Huckleberry Finn in America. He also performed most of the wonderful deeds, as a hero of all the nations and succeeded in it too. Though the poet is now an adult, he still fantasizes on the mysterious facts mentioned in the books that he has read.