I. Answer the following questions in .two or 3 sentences each.

Question 1.
What has happened to the photograph? Why?
Answer:
The photograph is yellowing and misted over by time.

Question 2.
What expression does the poet read in the eyes of his great grandmother?
Answer:
Her eyes are stem but they can laugh too.

Question 3.
Describe the poet’s great grandmother as she appears in the photograph.
Answer:
Her looks are frank and serious. Her eyes are stem. Her hair is pulled back tightly in a bun. She wears no jewelry. She wears a black dress.

Question 5.
‘She looks out at me’ – what does this opening line of the poem mean?
Answer:
The poet feels that his grandmother is looking out at him. i.e., She is seeking him

Question 7.
What were the feelings that the poet experienced when he looked at the photograph of his great grandmother?
Answer:
The poet felt that “may my great-grandchildren feel as close to me as I now do to her”.

Question 1.
Yet I recongnize myself in her, three generations later’
Answer:
Question a.
What does the word ‘recognize’ mean in this context?
Answer:
The word ’recognize’ means understand and identify himself with his grandmother.

Question 2.
What feelings/thoughts run in the poet’s mind as he looks at the photograph of his great grandmother?
Answer:
The poet feels that his grandmother is looking out at him. He feels close to her, though he never knew her. He is able to recognize himself in her. He wishes that may his great-grandchildren feel as close to him as he then did to his own grandmother.

Question 3.
What picture do you get about the great grandmother of the poet.
Answer:
We come to know that the grandmother had a frant and serious look. Her eyes are stem but they could laugh too. Her hair is pulled back in a tight bun. She is wearing a black dress and wears no Jewelry. 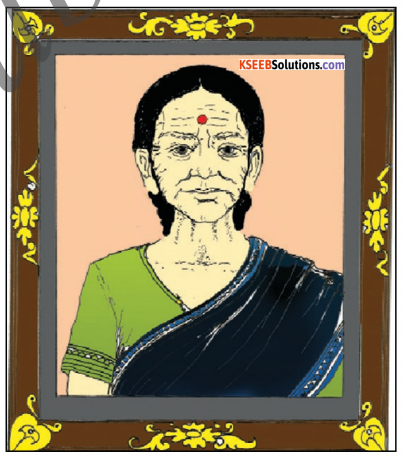 This poem depicts the characteristics of a grandmother. Through the Portrait one can identify the appearance and the facial expression and what kind of a person she was. The poet clearly explains in each line about his grandmother’s look. Though the poet he describes her look as frant and serious. Her eyes are stem, but the poet is sure that they’ could laugh too. Her hair is pulled back in a tight bun.

She is wearing a black dress with no Jewelry. The poet is born after his grandmothers’s death. Even though he did not know her, he feels that he can recognize himself in her. The poet wishes that his great-grandchildren (bom three generations later) may feel as. close to him as he now felt of his grandmother. 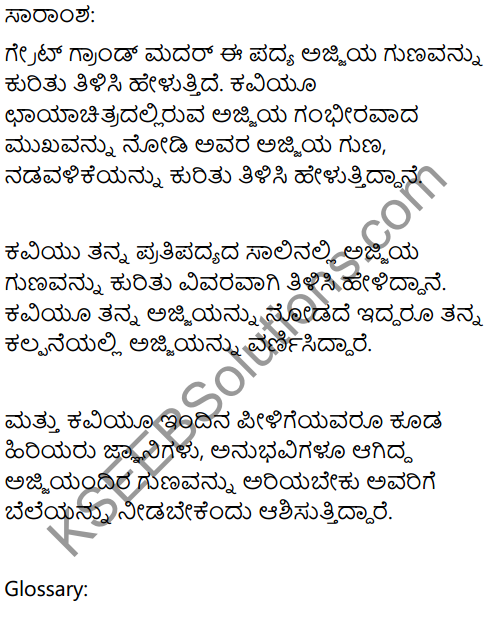 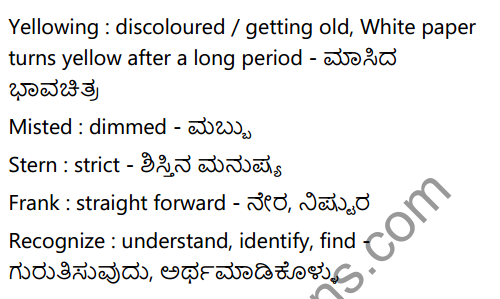