I. Answer the following questions.

Question 2. a.
When was Puttraj Gawai born?
Answer:
Puttaraj Gawai was born on 3rd March 1914

Question 3.
Make a list of the different honours that puttaraj Gawai received from the society
Answer:

Question 4.
How is Puttraj Gawai different from other musicians?
Answer:
Pt. Dr. Puttaraj Gawai had lost his eyesight when he was six years old. Despite this inability, he mastered both Hindustani and Carnatic Music and became Ubaya Gana Vishard. He could play many musical instruments such as the veena, Tabala, Mridangam, Dilruba, Shehnai and sarangi and also attained a high degree of mastery over all of them.

Having mastered Kannada, Hindi and Sanskrit, he had authored over 80 outstanding works which include Puranas, biographies, drama, commentaries and texts of music. He has also translated ‘Siddanta Sikhamani’ from Sanskrit and ‘BasavaPurana’ from Kannada to Hindi. He was honoured by the then president of India, Dr. Rajendra Prasad. He also edited a monthly magazine ‘Panchakshara Vani’ – a great contribution to Kannada and Veerashiva literature. He set up ‘Sri Guru Kumareshwara Poshita Natya Company’ and also directed many dramas. The Veerashwara Punyashrama has nurtured many artists of national and international fame.

Question 5.
Did puttraj Gawai get all the honors only for his music
Answer:
Dr. Puttaraj Gawai has also been conferred with many titles and awards by many institutions that promote art and culture, recognize talent and service to humanity.

Question 6.
“The life story of Puttraj Gawai is lesson to all”, Do you agree with this view.
Answer:
Yes, I agree with this view. His life – story is a lesson not only to the physically – challenged but also to normal human – beings. He has set an example for all of to follow and achieve.

Question 7.
What are the features of the schools run by Veereshwara Punyashram?
Answer:
This ashram is specially dedicated to imparting musical knowledge to people who are differently abled especially the visually challenged drawn from all castes, religions and sections of the society.

II. Say whether the following statements are Trite or False:

a) The early childhood days of puttaraj
Pt. Dr. Puttaraj Gawai was born to Revanayya and Siddamma at Devagiri, near Karajagi in Haveri District, on 3rd March, 1914. He was named ‘Puttayya’. As a child he was very attractive with bright eyes. When he was about six years old, his eyes got infected. Although his mother tried various medicines suggested by native doctors, he lost his eyesight at an early age. Puttayya, lost his father when he was just two years old.

He was brought by his maternal uncle, Chandrasekharayya. While growing up there, he learned to play the harmonium His uncle encouraged him and taught him everything he knew about music. His uncle understood his unquenchable thirst for music and knowledge and took him to Pt.Panchakshara Gawai. Under his, expert guidance, Puttayya mastered both Hindustani and Carnatic music,

b) The achievements of Puttaraj
Puttayya also leart to play many musical instruments such as the Veena, the Tabla, the Mridangam, the Dilruba, the Shehnai and the Sarangi and was recognized as an outstanding musician. He attained a high degree of mastery over all of them. Puttayya also learnt Braille – the script for the visually challenged.

Having mastered Kannada, Hindi and Sanskrit, Pt. Puttaraj authored over 80 outstanding works which include puranas, biographies, drama, commentaries and texts on music. Notable among them are the plays, Sree Kumareshwara Kavya, Akkamahadevi Parana, Satisukanya, Puratanara Puraba, Sharanara Basaveshwara Purana, Guru sudha and Sangeeta Shastra jnana are his works on music.

His translation of Siddhanta Sikhamani from Sanskrit and Basava Purana from Kannada to Hindi are commendable. His Basava Purana in Hindi won the appreciation of the then President of India, Dr. Rajendra Prasad. On learning that the author was blind, the President invited him to his residence and honoured him. In spite of his physical disability, Pt. Puttaraj Gawai achieved wonders as the editor of Panchakshara Vani, a monthly magazine.

II. Use the following words in sentences of your own.

I. Fill in the blanks using a or an :

II. Correct the errors if any in the following passage:

The Challenged Conqueror Summary In English 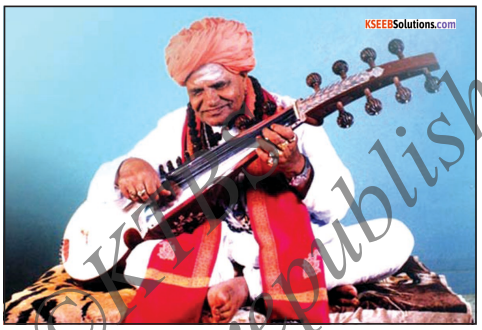 The lesson is about the legendary musician Pt. Dr. Puttaraj Gawai. He has created new ragas in the world of music. He is a legendary musician, a vocalist, a gifted writer, a playwright, an, instrumentalist, an ardent lover of music, and a proprietor and director, a poet all in one.

He was bom on 3rd March 1914 at Devagiri near Karajagi in Haveri District. They named him Pattaya. When he was not even six months old, his eyes got infected. His mother tried various medicines suggested by native doctors, this resulted him losing the eyesight an early age. His maternal uncle Chandrasekharayya brought him up.

He started playing his uncle’s harmonium and he mastered both Hindustani and Karnatic music. He also learnt Braille. He has written many plays including, Shree Kumareshwara Kavya, Akkamahadevi Purana, Sati Sukanya, Puratanara Puraba etc.

He because the successor of the ashram Veereshwara Punyashram after his Guru Panchkashari Gawai died on June 11th, 1994. September 2010. He has earned many titles and awards which include president Award for “Basava Purana” in Hindi, Honorary Doctorate by Kannada University, Kendra Sangeet Nataka Academy Award and Padma Bhushan etc.

The Challenged Conqueror Summary In Kannada 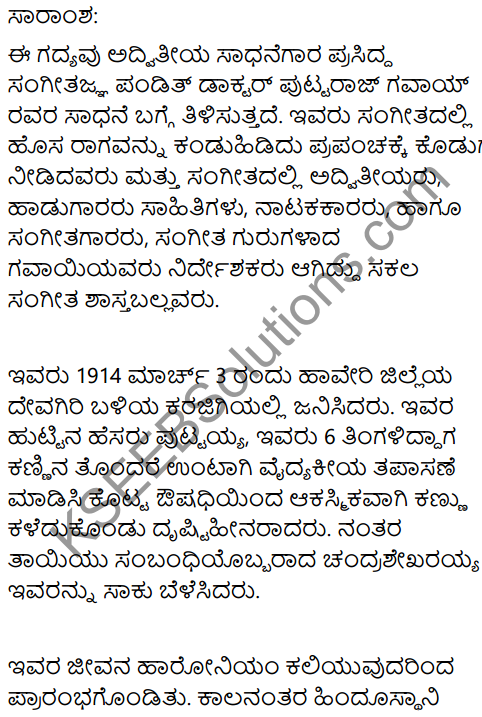 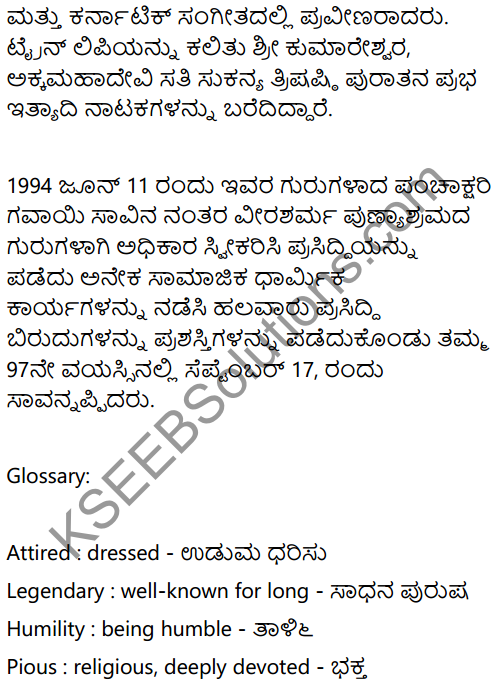 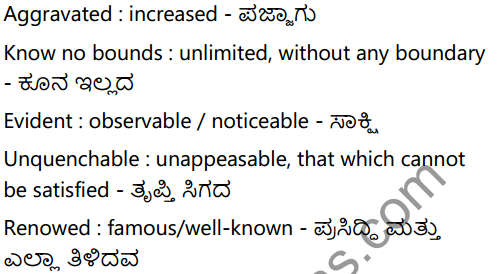