1. Look at the points raised in the questions given below. Talk about them to your partner, the boy or the girl sitting next to you. Write down what you say

Question a.
The first traveler gave the robbers a good fight
Answer:
Not True

Question c.
The sight of the wounded man frightened the priest
Answer:
True

Question d.
Describe the pitiable state of the man in two short sentences.
Answer:
The man lay bleeding to death in dirt. The man could barely raise his head to beg for help.

Question e.
“I don’t want to dirty my hands”
Answer:

Question i.
The fourth traveller had noble and generous feelings
Answer:
True

Question j.
There was something special in the fourth man’s act of kindness. What was it?
Answer:
The wounded Man was a jew. The man who helped him was a Samaritan. Jews and Samaritans were enemies for centuries. Despite this enmity the good Samaritan helped the wounded Jewish Man.

Question l.
The Samaritan was well-to-do. Give 2 reasons.
Answer:
The Samaritan owned a donkey and carried wine with him.
He gave some money to the innkeeper to take care of the wounded man.

Question n.
What moral lesson did Jesus teach through this parable?
Answer:
Jesus taught his followers to love everybody especially strangers and those who are in need of help.

4. Now, working with your partner, re-write these pairs of sentences as single sentences.

Answer:
Neither did you ask me for a loan nor did I give you one.

Answer:
I caught the ball at the boundary line and they lost the match.

Answer:
She ran very fast and caught the chain- snatcher.

Word formation:
Note that the suffix ‘-er ’ combines with verbs to form nouns.

5. Working with your partner, write down some verbs and their noun forms.

6. Write a conversation between the innkeeper #nd the injured man. Begin like this.

The next morning the innkeeper said to the injured man, “ You lay unconscious the whole day yesterday. How are you feeling today?” “Much better, thank you,” said the injured man ________

6. a) Work with your partner, the boy or the girl sitting next to you, and fill inappropriate words in the blanks.

“Let us hide behind this tree”, said the robber to his companion. “Good place. We can see the travelers from this end to that end”, said the second one. “The road is empty,” said the first. “ We will have to wait”, said the second.

The Good Samaritan Summary in English 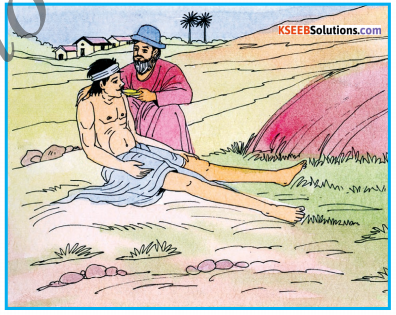 The short story ‘ The Good Samaritan’ is a Parable narrated by Jesus Christ to his disciples. Long-time ago a man was walking from Jerusalem to Jericho, suddenly, he was attacked by two robbers, who beat him up and stole everything he had and also the clothes on his back.

Eventually, a Samaritan comes down the road. He came over to the man and gently cleaned the man with water and also gave him some water to drink. He cleaned the wounds with a little wine to make them heal quickly. He put the man on his donkey and brought him back to town. Although the wounded man was a Jew, the Samaritan helped and saved him. Jews and Samari¬tans had been enemies for hundreds of years.

The Samaritan gave some money to an innkeeper and asked him to give a clean bed and to take good care of the man until he was strong again. After narrating this parable Jesus Christ asked his disciples which of the three men was true neighbour to the man who was robbed.

An expert at Jewish law quickly said that a the true neighbour of the robbed man was the one who helped him.
Jesus then asked them to go out and do just the same i.e, to help their fellow human beings.
Thus Jesus Christ’s disciples understood that he wanted them to love and help everybody, especially strangers who needed help.

The Good Samaritan Summary in Kannada 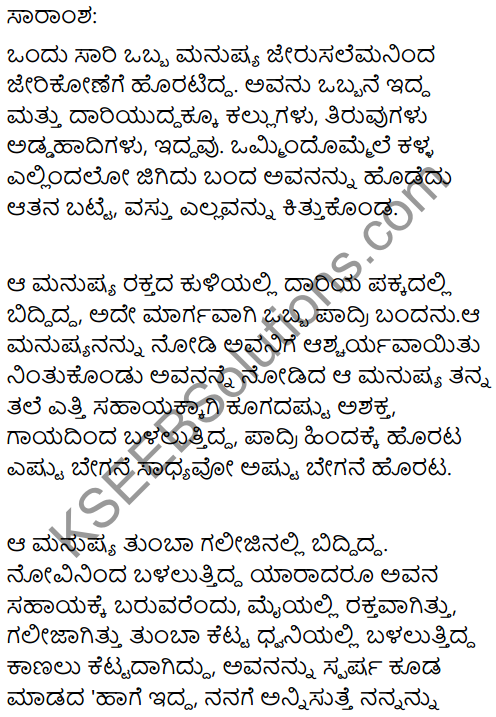 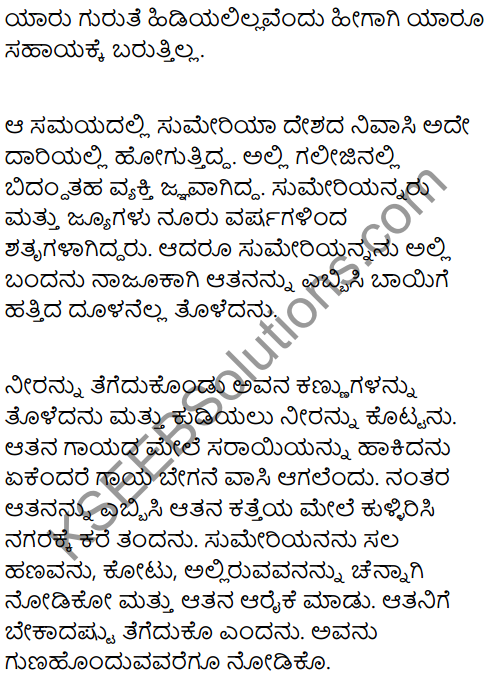 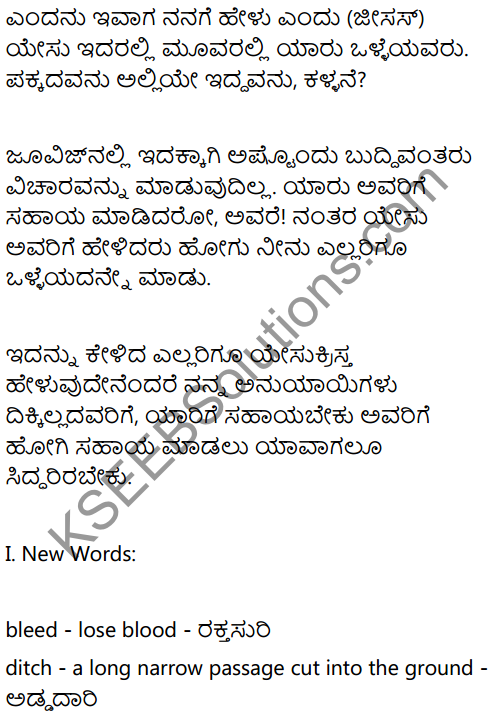 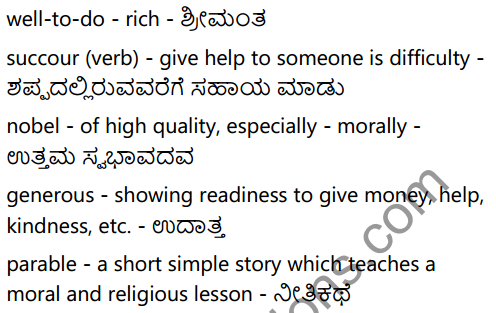 Hope the information shared regarding KSEEB Solutions for Class 6 English Chapter 2 The Good Samaritan Questions and Answers is true and genuine as far as our knowledge is concerned. If you feel any information is missing do react us and we will look into it and add it accordingly.