KSEEB Solutions for Class 6 English Prose Chapter 7 I Want to Quit The I.C.S.

Karnataka State Board Class 6 English Prose Chapter 7 I Want to Quit The I.C.S.

I Want to Quit The I.C.S. Questions and Answers, Summary, Notes

Let us remember some of our great national Leaders.

Question a.
Who is the man who grew up to be a great leader after he came back from South Africa?
Answer:
Mahatma Gandhiji.

Question b.
Who is the man who wrote letters to his daughter when he was in prison? What more do you know about him?
Answer:
Pandit Jawaharlal Nehru.

Question d.
Who is the national leader who is called “The Iron man of India”?
Answer:
Sardar Vallabhai Patel.

1. Read the given extracts to your partner and discuss the answers with him/her.

Question a.
‘I’m writing this letter to you on a very important matter.

Question C.
‘Booklets will be published in every provincial language’?
Answer:

2. Answer in two or three sentences each.

Question b.
What options did he have in his mind after quitting the I.C.S?
Answer:
After quitting the I.C.S he wanted to plunge into national work with determination. He wanted to teach at the National College in Culcutta and take up. writing and publishing books and newspapers organizing village societies, spreading education among the common people.

Question d.
Why didn’t he dare to write directly to C.R.Das? Who did he send his letter with?
Answer:
Then Bose was I.C.S probationer and his letters will be censored. So he sent that letter through a trusted friend of him.

3. Work with your partner and discuss the points raised in these questions. Give your reasons for what you say. Write down what you say:

Read paragraphs 6 and 7 carefully and pick out the sentences which contain the following words and phrases.

Question a.
lest
Answer:
I did not dare to write to you directly lest my letter should be censored.

Question b.
in a sense
Answer:
I am now in a sense a government servant.

Question c.
did not dare
Answer:
I did not dare to write to you directly.

Question d.
to give-up
Answer:
I desire to give UP the service with clear cut plans.

Question e.
of mine
Answer:
I am sending this letter through a trusted friend of mine.

Question f.
of course
Answer:
You may, of course, write to me.

Working with our partner, write down your own sentences with the words given below-

1. Read the sentences aloud to your partner. Tell him/her what the speaker is doing.

2. Now complete these sentences using the words given in the brackets:

3. Write down 6-8 sentences about what you think of Subhas’ character. Note that he was very young at that time.

Young Subhash Chandra Bose was a very intelligent boy. He cleared all his examinations easily. He had great respect for elders in the society. This he proved in his letter to C.R.Das. He was patriotism personified. He had many constructive ideas to serve the nation. He was very sure about the results of his service to the nation.

I want to quit the I.C.S Summary in English

The lesson ‘I want to quit the ‘I.C.S.’ is a letter written by Netaji Subhash Chandra Bose to DeshaBandhu Chittaranjan Das, seeking his advice, about what he should do after quitting Indian Civil service, a government service job.

The letter is written on 16 February 1921, from the Union, Society of Cambridge University.
In the letter, Subhash Chandra Bose introduces himself to the ‘Deshabandu’, because he is a stranger to him.

He introduces himself as the son of Mr. Janakinath Bose who is a practising lawyer at Cuttack. His brother Mr. Sharat Chandra Bose is a barrister of Calcutta High court. He had passed his B.A. Examination with a first-class.

He had arrived at Cambridge in October 1919, and passed the Civil Service Ex-amination in August 1920 and secured a second place. After introducing himself, Subhas Bose writes that he has no desire to enter the government civil service. He is determined to enter national work after quitting Civil Service.

He assures Mr. Chittaranjan Das that he will have plenty of work to do, like teaching at the National college, established by Mr. Das and by writing and publishing books and newspapers, Organising village societies and educating the Indian masses.

He requests Mr. Das to let him know what works, he will be assigned by Mr. Das in the great programme of National service. He assures Mr. Das of his youthful enthusiasm to serve the nation. He is thankful to the Civil Service examination because it has provided him all – round education in Economics, Political Science, English, Law, Sanskrit and Geography.

He desires to give up civil services after making defhite plans of his future course because he wishes to not spend his time in aimless pursuits. He is eager to jump into the field of work at the earliest.

He has sent this letter to Mr. Das through a trusted friend, fearing censorship by the British administration and in future his correspondences will be through his trusted friend. Subhas Bose also writes that he had formed a few ideas regarding Indian National Movement. He believes that there must be a permanent meeting place, perhaps a house and that there is a need for a research group to study the various national problems.

The Propaganda Department will publish these researches in every provincial language, among the public, for free. In addition to pamphlets, a book on each and every question in the rational life and the policies of the organisation with explanation should be published.

Subhas concludes his letter by writing that such questions are not new to Mr. Das. He finally says that he feels that there was tremendous work to do in the future through the movement. His wish was to be able to contribute to the movement in every respect.

I want to quit the I.C.S Summary in Kannada 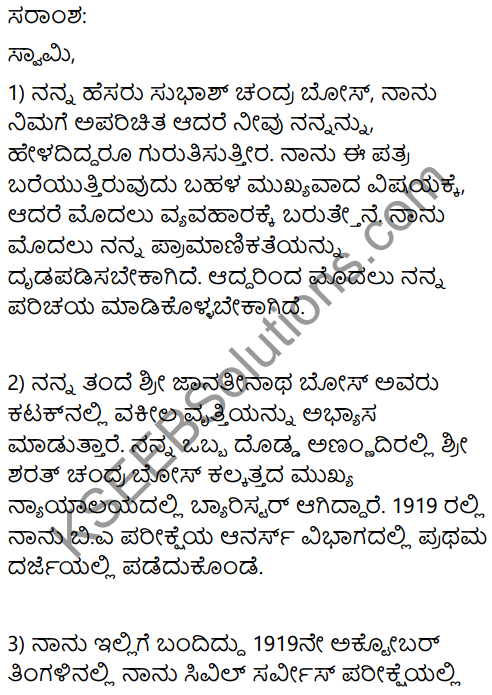 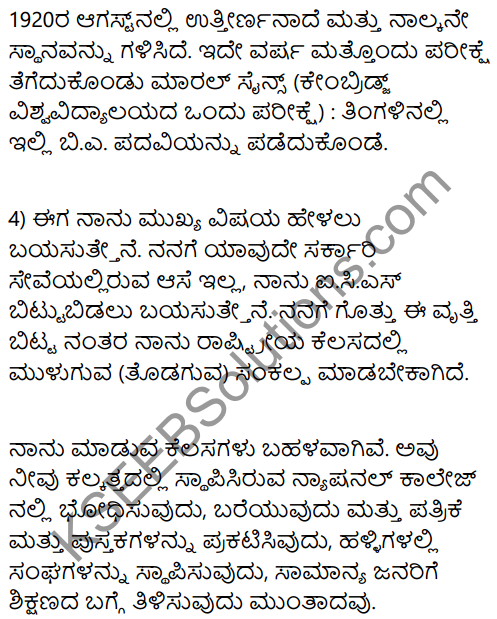 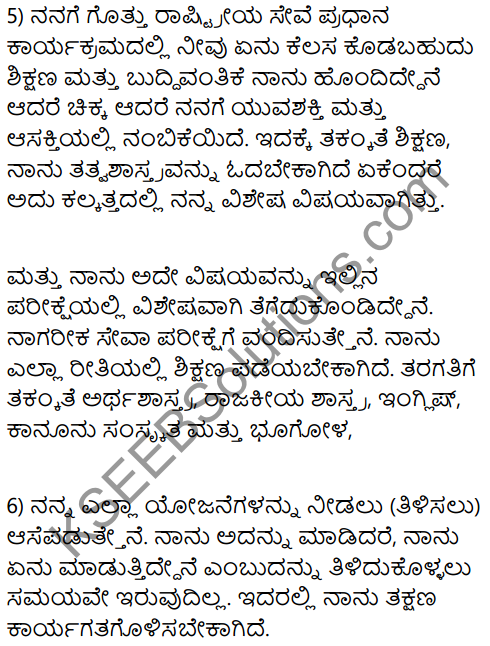 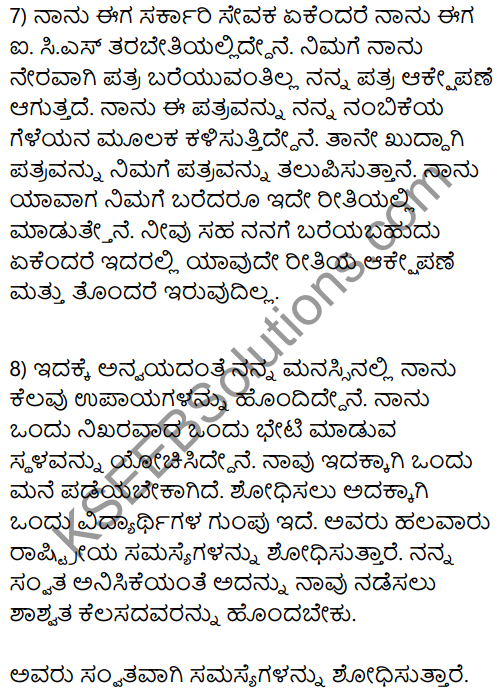 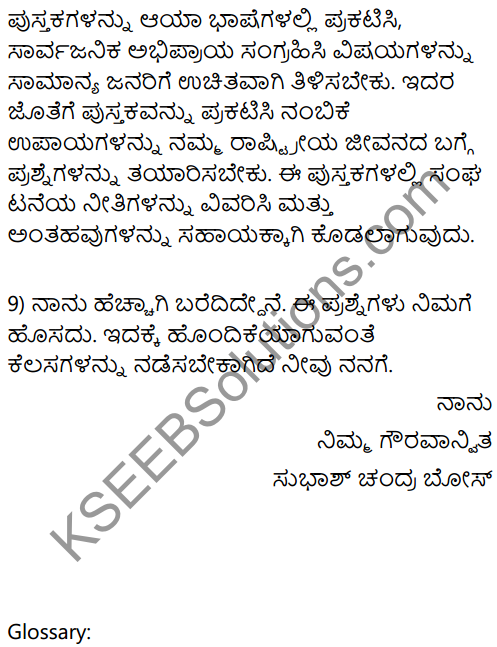 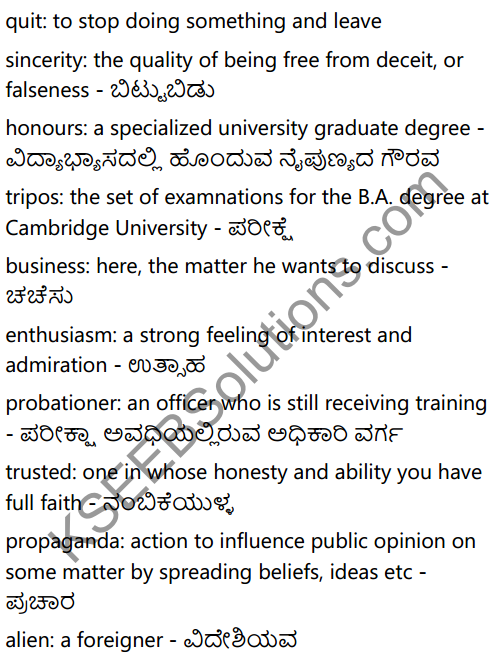 Hope the information shared regarding KSEEB Solutions for Class 6 English Chapter 7 I Want to Quit The I.C.S. Questions and Answers is true and genuine as far as our knowledge is concerned. If you feel any information is missing do react us and we will look into it and add it accordingly.