A Tribute to Netaji Questions and Answers, Summary, Notes

I. Take turns with your partner to ask and answer the questions given below.

Explain to him/her why you think your answer is correct. Quote from the text if necessary. Write down your answers.

Question 1.
How does Subha’s uniqueness come out in his struggle for freedom? How does he differ from other national leaders? Give two examples.
Answer:
Subhas Chandra Bose was the leader who thought of fighting the brute force of the British by armed force. He was a revolutionary freedom fighter and leader with indomitable courage and vigour with continuous effort he moulded himself as one of the most promising leaders during the Indian freedom struggle.

He cast his influence on several Indians spread all over the world, he moved ahead with his meticulous plans to wage a war against the British. His political views were different from those of other important leaders. He differed in their opinions and ultimately it lead to disassociation with Congress.

Bose was of the opinion that India should take advantage of the second World War in which Britain also participated. He thought that British should grant independence in return to the help Indians will give Britain in the war. But prominent leaders like Gandhiji and Nehru differed with him.

Vivekananda taught him the way to spiritual development. He also taught yogic exercise has to be supplemented by social service. Bose joined a group students who used to go to villages to bring relief to victims of epidemics like plague, cholera and smallpox.

In the Presidency college, Calcutta, he organised a students strike to demonstrate against an English professor who had insultingly pushed away an Indian student for this, Bose was expelled from college.

Question 3.
Subhas was an inspirational figure. Give three examples for this.
Answer:
Nethaji organised Indian National Army (I.N.A) to fight against the British. The Indians soldiers and civilians at once declared their allegiance to him and began to call him ‘Nethaji’. He gave them the inspiring call of ‘ Jai hind’ and “Dilli chalo”.

Bose has strong views and advocated total freedom. He traveled throughout the country to organize public opinion against the was effort. Bose went on hunger strike against the ill-treatment of prisoners inspiring Indian to wage was against British.

Bose preferred a life of trials and tribulations as a fighter for his country’s freedom. He was a doer as well as thinker, and a fighter who never submitted to defeat. In life, he was a natural leader of men who inspired immense devotion and loyalty.

Question 4.
Subhas was broad-minded and spiritual. He did social work even as a young man. He worked for national integration and he was a man of vision. Give examples.
Answer:
He was broad-minded and looked at India in an international perspective. He had a special regard for his Muslim countrymen. He had very broad-minded views on freedom and other social issues and his hungry soul was not satisfied with textbooks alone.

He had a deeply spiritual nature. He went to Shri Ramakrishna Paramahamsa and Swami Vivekananda and learned the practice of yoga. Vivekananda taught him the way to spiritual development.

He learned yoga exercises and involved in social service. He joined a group of students and visited villages to give relief to victims of epidemics like plague, cholera, and smallpox.

Question 5.
Give an account of the sacrifices Subhas made.
Answer:
Subhas promised his father .to take up the ICS examination, and after a year he came out passing in merit. But his conscience did not allow him to serve the alien rulers even as a hight executive he resigned the job to sacrifice his life to serve the motherland.

When Britain was engaged in a world war, Bose traveled throughout the country to organize public opinion against the war effort. So he was arrested and went on a hunger strike to protest against the ill-treatment of prisoners. He was ready to undergo sacrifice until he got justice.

Question 6.
Give an account of Subhas’ adventurous life.
Answer:
One of the most adventurous- was the formation of in a to fight against the British the Indian soldiers and civilians at once declared to call him ‘Nethaji’. The army fought so well, soon liberated about 3,200 kms of Indian territory from the well-entrenched British army. But when the Japanese army was withdrawn, they were disarmed and court-martialled. As Bose boarded an aircraft to Tokyo, it caught fire while taking off. Nethaji was badly burnt and died in hospital the same night. This is one of the most adventurous act of Nethaji in his life.

Question 7.
Subhas worked in many different fields – administration, journalism, education, statesmanship and war. Give examples.
Answer:
Administrative field: Subhas made an impact on Congress that he was elected twice as President of INC in 1938 and 1939. In his presedential address, he talked not only of freedom but also of reconstruction, the need of planning by setting up planning commission and of gradual socialization of the entire agriculture and industrial system. He urged strongly to give an ultimate to the British government for complete “swaraj”.

Journalism: Bose’s intention was to bring awareness of polities of British as well as every indian to urge for the freedom. He found the latest media to reach the people through journals, newspapers After being released from the prison, he was appointed as the editor of party’s journal ‘Forward’. Bose became executive officer of Calcutta corporation and gained valuable experience of planning and practical administration.

Education field: Subhash joined Scottish Church College in Calcutta where he secured first class in B. A exam. Then he left for England to appear at ICS, he came fourth in order of merit. After having long discussions with Gandhi and C.R. Das he settled down as Principal which was later on resigned by him.

Statesmanship and war: Bose Believed that Gandhiji tactics of non-violence would .never be sufficient to secure India’s independence and advocated violent resistance He established a separate political party. All India forward Bolo and continued to fight for the full and immediate independence from British rule. This famous motto was “Give me blood and I will give you freedom At the outset of the war, he left India, traveling to Soviet Union, Nazi Germany and Imperial Japan seeking an alliance with each to attack the British government in India.

b. Make six sentence using the verbs and the adjectives you have written
Example: We gave the fruit to the monkey, The monkey ate the fruit. So we thought the fruit was eatable.

1. enjoy – enjoyable
Rita learnt photography. Though she was amateur photographer, she felt it is enjoyable.

2. move – moveable.
Shyam trying to move the big stone. After putting great effort it was moveable.

3. Watch – watchable
Girls saw the interesting movie which was even watchable by children.

4. Note – notable
Judged noted the point which was a notable point.
series

5. Walk – Walkable
After going to a temple they came to know temple was at walkable distance from their house.

6. Drink – Drinkable
Even though the drink was cold, it was drinkable.

Combine these pairs of sentences into single sentences

Write a short paragraph about him/ her. You can use the title “The most unforgettable person I have met.”

The most unforgettable person I have met is my teacher who is always entrusted in educating children. She led her childhood miserably by which her parents couldn’t give her higher education But our teacher determined to educate her younger brother and sister by sacrificing her life to serve them. Even whenever she found a student Ms to pay the fees she used to pay for them and helped them to continue, their studies. Our teacher is very good inspiration to me. She always made our minds to think positively and be studying as long as we can Our teacher is the most unforgettable person I have met.

Question 1.
Write a brief family background of Nethaji.
Answer:
Subhas was born at Cuttak, Odisha on January 23, 1897. His father JanakinathBose was a famous lawyer. Bose was a brilliant student. Some of his ancestors like Mahipati Bose and Gopalnath Bose held the offices of minister and naval commander under the Muslim CPC Honest Success series rulers of Bengal. He was brought up in touch with English people, English education and English culture.

Question 2.
What was his opinion about muslims.
Answer:
The quarters in which we lived says Bose in his autobiography was prominently a Muslim one and our neighbours were mostly Muslims. I cannot remember ever to have looked upon muslims as different from ourselves in any way, except that they go to pray in a mosque.

Question 3.
How did Nethaji Seek the blessings of Gandhiji? What was it? Quote his words.
Answer:
While Launching the war against, the Imperial British army, Netaji went on air on July 6th, 1944 and sought Gandhiji’s blessings in the following words. ‘Father of our Nation, in this Holy war of India’s Liberation, we ask for your blessings and good wishes.”

A Tribute to Netaji Summary in English 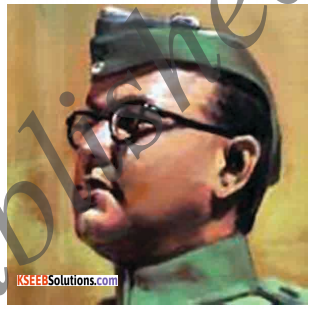 Subhash Chandra Bose was a great freedom fighter. He inspired Indians to give their blood and he would give him freedom But Gandhiji promised to give freedom without violence. Hindu, Muslims and Sikhs adored Subhas and called him ‘Netaji’.

As he was a good organiser he organized an army of about 75,000 men and women. He inspired them with intense patriotic fervour and desire to free their enslaved motherland. Subhash had a special regard for his Muslim countrymen and he said they are not different from us in any way, except that they go to pray in a mosque.

Bose was rebellious, as a student he organised a student strike to demonstrate against an English professor who had insultingly pushed away an Indian student. Though he was appointed as High executive his conscience would not allow him to serve the alien rulers. So he resigned and returned to India.

In his presidential address, he talked not only of freedom but also of reconstructions need of planning by setting up of planning commission and of gradual socialization of the entire agriculture and industrial system.

Subhash went to south-east Asia and organized the I.N. A to fight against the British. He also took Gandhiji’s blessings and in a fought well, but when Japanese forces were withdrawn war went badly for them Nethaji was badly, burnt in a plane crash he was rushed to a hospital where died the same night. People refuse to believe that Nethaji is dead they are right, for martyrs never die.

A Tribute to Netaji Summary in Kannada 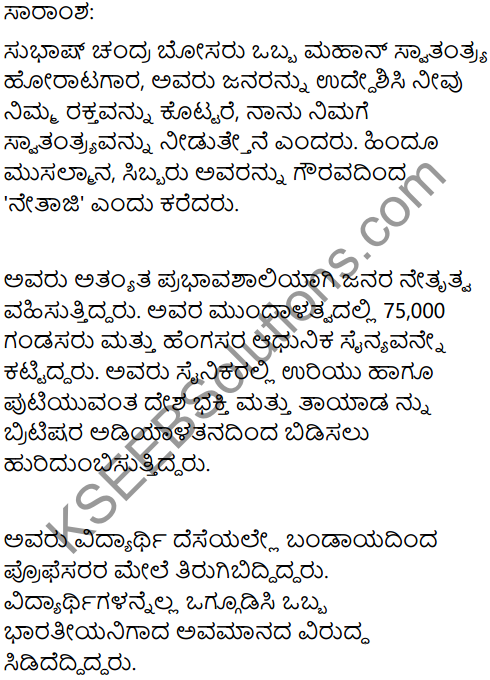 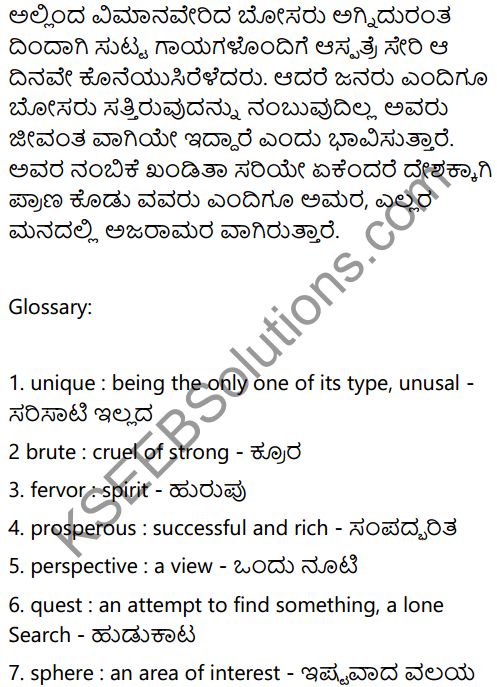 The above furnished information regarding KSEEB Solutions for Class 7 English Chapter 7 A Tribute to Netaji Questions and Answers is true as far as our knowledge is concerned. If you have any doubts feel free to reach us via the comment section and we will reach you at the soonest possible.