Enhance your subject knowledge through the KSEEB Solutions for Class 7 English The Dream Questions and Answers lay a stronger foundation of your basics. Verify your answers with the Karnataka State Board Class 7 English Chapter 2 The Dream with Answers provided and know where you went wrong.

Question 1.
Why did the woman ask the guard to report the other man’s answer?
Answer:
Once there was an old, intelligent woman. She dreamt that she had died. In the dream, she saw two ornamental gates with arches which looked alike. As she moved towards the gate she heard a bodyless voice say that one of the guards is a liar.

Both the guards looked alike She thought of how to bring out the truth from them and intelligently she framed a question. She asked the first person ‘What would that other guard say if I asked him which is heaven’s gate? She asked him to report because to bring out the truth from them and to know the gate of heaven. Old woman knew that the man she talked was not telling the truth as the truthful man would only report the bar’s exact words and the liar would twist the truthful man’s words.

Question 2.
What were the woman’s last words?
Answer:
After the dream ended, the old woman woke up, and then she got strange thoughts in her mind. She thought that she should share her dream with class 7 students. She lay down back to sleep and died that night in her sleep.

Question 3.
If her question was straightforward forward this is what would have happened.
Answer:
The chances of getting the truth will be fifty-fifty.

A. (The two guards are talking to each other)

G1. Look, the old woman is coming.
G2. She’ll ask you which is the way to heaven.
G1. How will she know which gate will lead to heaven?
G2. She can’t know that. We look very much alike?
G1. But I think she is capable enough to ferret out the truth from us.

B. (The woman has walked to the first guard)

C. (The woman goes to the second guard)

The Dream Summary In English

Lesson deals with dream of an old woman. It is not only the dream, but it also shows the intelligence of old women. The story starts from the dream of the old women. In her dream, she is dead. After her death, she could see two ornamental gates with arches which looked the same. She could see pathways beyond the gate. As she continued towards the gate she heard a bodyless voice saying that one of the guards at the gate is a liar. The old woman wanted go in the pathway of heaven but the warning came back to her.

She thought of a plan to bring out the truth from the guard. As she was very intelligent she framed a question well. She went to the first guard and asked him what would that other guard say to her if she asked him which is the heaven’s gate?
The other guard smiled and pointed towards his gate and said that he would show this old warner came to know

that he was a liar, as the truthful man had reported. The truthful man would only report to her the liar’s exact words, and the liar would twist the truthful man’s words. From this she successfully knew the heaven’s gate through her intelligence, she woke up and thought of telling this puzzle to 7th class students and the same night she died peacefully in her sleep.

The Dream Summary in Kannada 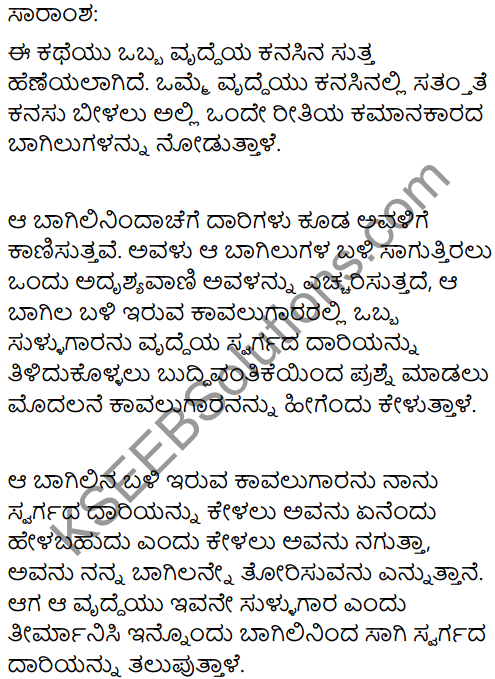 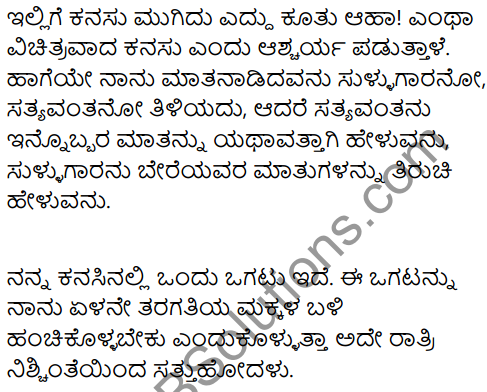 The above furnished information regarding KSEEB Solutions for Class 7 English Chapter 2 The Dream Questions and Answers is true as far as our knowledge is concerned. If you have any doubts feel free to reach us via the comment section and we will reach you at the soonest possible.