With the help of the Karnataka Secondary Education Examination Board Class 8 English Solutions Chapter 3 Jamaican Fragment Questions and Answers Pdf, Notes, Summary you can get an idea about the subject. Also we suggest the students keep the textbook aside to learn the subject in depth.

Question 1.
Why was the morning walk pleasant to Mr A.L.Hendricks?
Answer:
A.L. Hendricks considers his morning walk from his home to the tramcar lines pleasant and beneficial for three reasons. First of all, the setting was good with red and green-roofed bungalows, green lawns, and gardens on either side. Secondly, the walk was as beneficial as exercise. Thirdly, some of the incidents that took place during this period enlightened him in one way or another adding to his wisdom.

C2. Answer the following questions and share your responses with your partner:

Question 4.
Why do you think the narrator smiled at the end?
Answer:
The narrator who had earlier worried over the possible supremacy of the whites over the Jamaicans is now proud that Jamaica has the spirit of accepting the whites without losing its pride. This relieved him of his anxiety and doubt. Therefore, he . smiled in the end.

C3. Some statements are given below. Some are true and some are false. Write ‘T’ or ‘F’ in the box provided against each sentence accordingly.

C4. For each of the statements, four alternatives are given as the answers. Choose the best alternative,

Question 1.
The two boys in the story are
a. good friends
b. brothers
c. neighbors
d. classmates
Answer:
b. brothers

Question 3.
The black boy had a mat of coarse hair on his head. Coarse means
a. rough
b. beautiful
c. nice
d. long
Answer:
a. rough

Read and Write:
C5. Read and discuss your responses with your partner. Then write:

Question 2.
What three commands did the big boy give the small boy?
Answer:
The big black boy gaves only two commands to small white boy. The commands were

Question 4.
Why was the narrator surprised the next morning?
Answer:
The game next morning astonished the author because it went against the conclusions he had arrived at the previous morning. The next morning too, the game was the same game of master and servant. But, the boys had changed roles and it was the turn of the dark boy to play the role of a master with the younger, white boy taking on himself the role of the servant.

Vocabulary :
V1. Column A’ has the names of the Countries. Choose the correct nationality from the list given below
and write in Column ‘B’.
e.g. America      American

V2. Guess and give the meaning of the es words underlined in the table given below.

Now verify the meaning you have written with the help of a dictionary.

V13. Read the following conversation and use the appropriate word from the ones given in brackets.

Patient: Doctor, the wound in my heel pains me a lot [heel, heal]
Doctor: Don’t worry, it will heal up after treatment [heel, heal]
You are diabetic and u, so it may take one week (weak, week]
Patient: Excuse me, a word with you doctor. I don’t know whether it is fair to ask you this question. [fair, fare]
Doctor: Oh! Don’t worry. Tell me what it is.
Patient: I have no money to pay the bus fare [fair, fare]
I’m sorry doctor. I forgot to tell you that last week I lost your prescription [last, lost]
Doctor: OK, No problem. I’ll give you both.

V4. Fill in the blanks with words that have similar pronunciation as the words underlined.

V5. We can form the opposites by adding prefixes to words: e.g. Important and unimportant

Similarly, add the given prefixes so that, they become Opposites of the words underlined.

C. Reading
Question : Now match the topics with the texts. Two examples are given.

D. Grammar
The Past Tense

Sheela narrates a scene of action to her mother after reaching home.
Sheela: Mom, you see it all happened very quickly. The car came straight on the wrong side in front of the school. It rammed into the back of the school van. The van driver didn’t have any chance to avoid it. It was the car driver’s fault.

Task 1:
Study the words underlined above. They are in the past form. They can be changed from past to present.One example is given. write the others

Task 2 :
Fill in the blanks with the Past Tense form of the verbs choosing from the ones given in brackets.
(think, take, be, return, inspire)

Gandhiji returned to India in 1914. The great World War II had just begun. There were widespread agitations for freedom all over the country. Most of the leaders thought it is the right time to strike. Gandhiji’s presence inspired them a lot. So the freedom struggle took a definite shape that year.

Use of the Perfect form of the verb:

Follow the example to complete the exercise given below.

E. Writing
Task 1.
Match the traffic signs in Column B with the rules in Column A 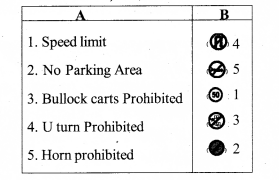 Task 2.
Look at the following advertisement carefully and answer the questions below

Question 3.
Write the names of dresses in the sale.
Answer:
The names of the dresses on Sale are Shirts, trousers, Jackets, Jeans pant

Question 4.
How does the dealer try to attract Customer name with this (advertisement)? Garments. Mention one point.
Answer:
The dealer tries to attract customers by giving Free offers and assures of a wide variety.
Model Advertisement of your choice Self-assessment

Question 1.
Why did the game in the morning amaze the narrator?
OR
‘I puzzled within myself says the narrator. What conclusion did he come to after this puzzling thought?
OR
What conclusions did the narrator reach, looking at the two boys playing the game?
Answer:
The game in the morning both amazed and upset the narrator. Although it seemed to be a simple game of master and servant, the narrator was surprised that the dark boy, in spite of being older and stronger, was playing the servant. This was in spite of their evidently equal social status. This makes the narrator wonder whether the Jamaicans considered themselves inferior and accepted the superiority of the whites even as children.

Question 2.
What, according to the author A.L. Hendricks, did the little boy sense in the game?
Answer:
The author A.L. Hendricks watches the game of a black boy and a white boy and notices that the black boy is taking orders from the white boy. The author then wonders whether the black boy, even before growing up, has accepted the superiority of the whites and is prepared to follow their orders even when he is in his own country.

Question 3.
will save him this puzzle’. What did the narrator think the man would puzzle all day? Was the narrator right?
Answer:
The narrator thinks that the white man watching the two boys play would make the same mistake that he himself had made the previous day. On the second day, since the white boy was playing the role of a servant, the author thinks that the white man would puzzle over the possible superiority of the blacks over the whites. He is wrong in his assumption because the white man is the father of the two boys and knows fully well that the boys are only playing a game.

Question 4.
With what thoughts did the author go to the white man?
Answer:
The author went to the white man with the thought of setting his wrong ideas right. He knows that he was wrong in jumping to conclusions about the game of the little children. He doesn’t want another adult to make the same mistake. If he was worried over the black boy’s acceptance of his inferiority so young in life, the previous day, the author thinks, the white man would be worried over the white boy’s inferior role the next day. The author wants to clear this misconception because by now he knows that only adults are guilty of such thoughts and not children.

Question 1.
The storyteller/narrator is a native of
A) Britain
B) Jamaica
C) Australia
D) Africa.
Answer:
B) Jamaica

Question 4.
At the end of the lesson, the author of ‘Jamaican. Fragment’ feels proud of being a
A) human being.
B) black.
C) Jamaican.
D) world citizen.
Answer:
C) Jamaican.

Question 6.
My spirit laughed at me. Here ‘me’ refers to
A) the Jamaican
B) the father of the boys
C) the brown woman
D) the author.
Answer:
D) the author.

In the prose ‘Jamaican fragment’ the author A L Hendricks says how prejudice misleads the person’s opinion. This incident happened in the author’s life. He depicted it very nicely.

Every day the narrator used to walk a half-mile from his home to the railway track in the morning and evening. The walk is pleasant to him because of the red and green-roofed bungalows, green lawns, and garden on either side and it gives good exercise.

The children were very small, really they were infants. At a very small age how could they discriminate? Who were they? Was the black boy a servant’s son? Who was he? They wore the same type of dress. Were they neighbors or playmates. Whoever might be? Were we, as a race really inferior that even in our infancy we realized our deficiencies and accepted a position as the white man’s servant?

The author went on asking these questions to himself for a whole day. His faith in his people was shaken. He didn’t find the boys in the afternoon. Again he thought deeply.

The next morning he found the boys and observed them. To his surprise, the dark boy was commanding and white boy did everything.

Then the narrator understood that was a game and he remembered what he played in his childhood. He smiled within himself. A white man was standing by the gate. The narrator recalled what he thought the previous day and night. The thought came to his mind that the black race is superior to white. How silly the grown-ups are to misinterpret a child’s action. Then he would try to clarify and drive away all the doubts from his mind. The narrator said these to these white men. He was surprised to hear the outburst of the narrator and said that the two boys were brothers and his children and introduced a brown woman as his wife.

The narrator smiled and his soul laughed within him. He said to his heart about his country and his people’s greatness and he was left proud of both. The white man smiled at the narrator and went away to catch the train. 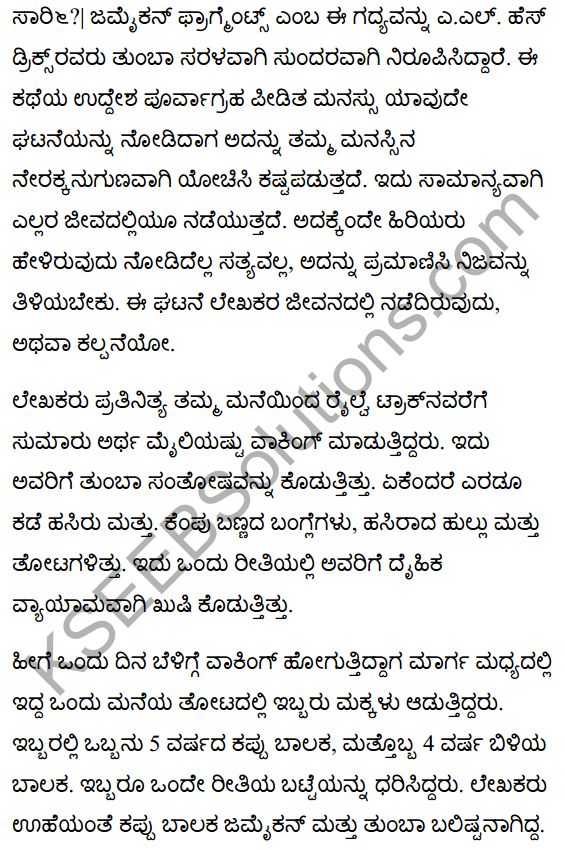 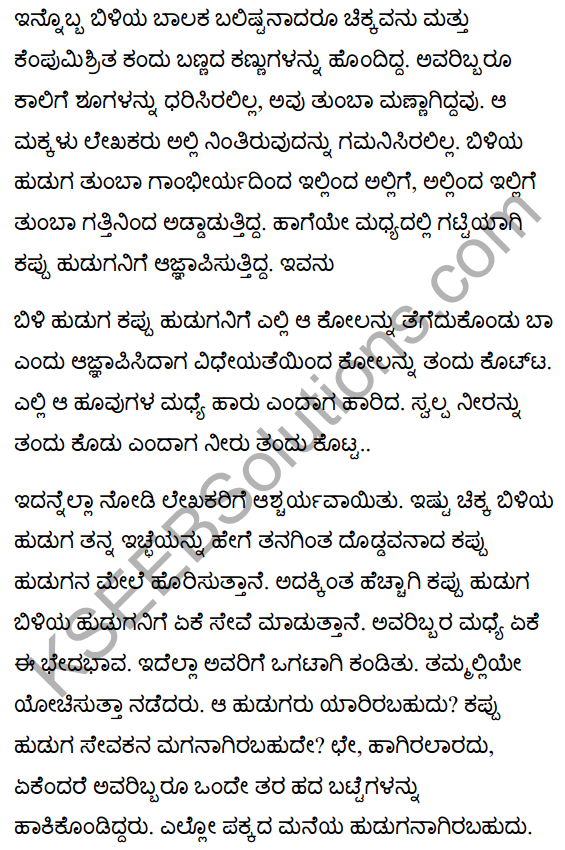 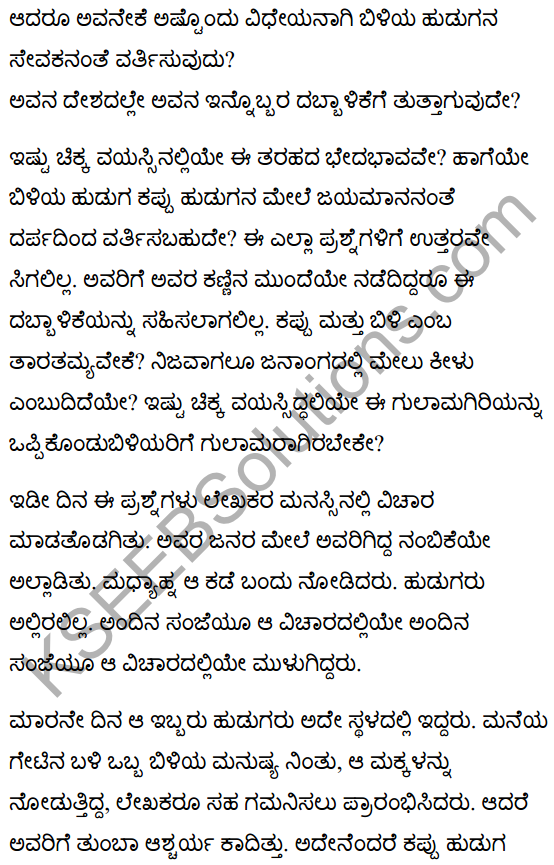 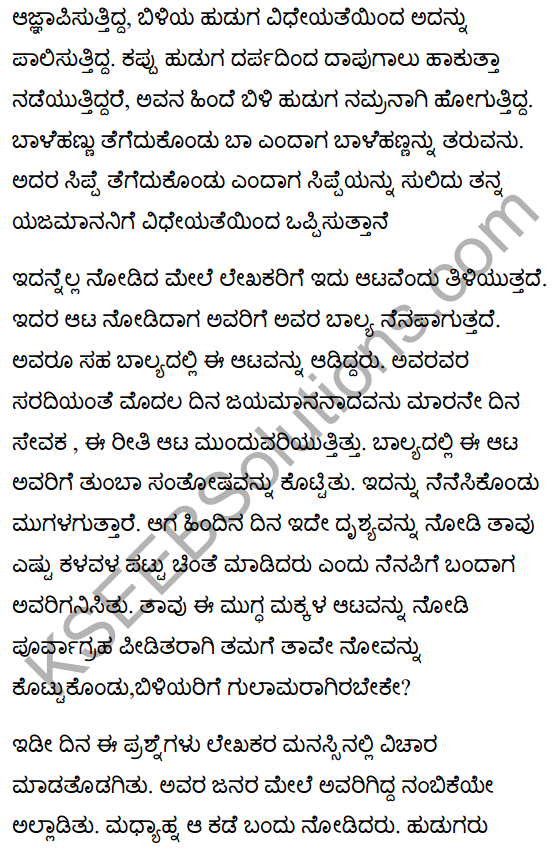 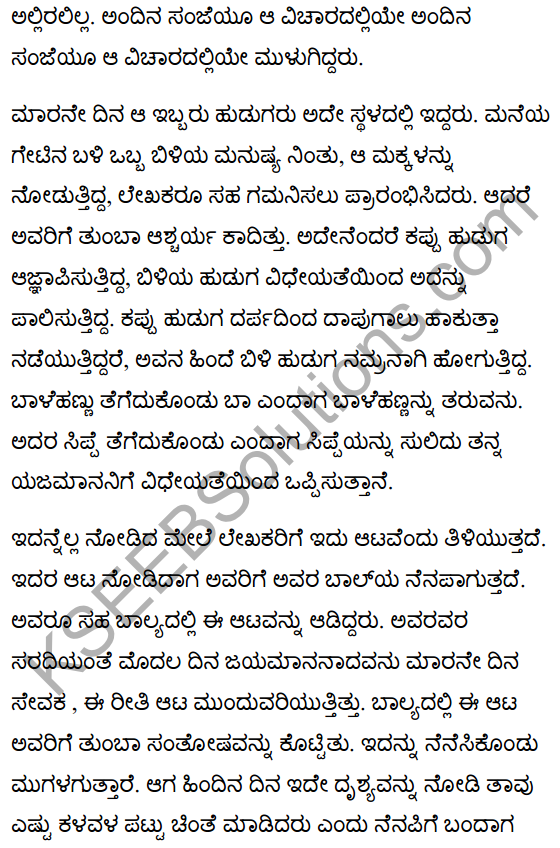 The main aim is to provide quality education for the students of Class 8 English Karnataka State Board Solutions. Class 8 is very important for the students in their career. We hope the information provided in this KSEEB Solutions Class 8 English Chapter 3 Jamaican Fragment Questions and Answers is satisfactory for all. Bookmark our site to get the latest information about the solutions.