All The World Her Stage Questions and Answers, Notes, Summary

With the help of the Karnataka Secondary Education Examination Board Class 8 English Solutions Chapter 6 All The World Her Stage Questions and Answers Pdf, Notes, Summary you can get an idea about the subject. Also we suggest the students keep the textbook aside to learn the subject in depth.
C1. Answer the following questions and share your responses with your partner:

Question 3.
When was the grandfather very much impressed by Sai’s ability?
Answer:
One day her grandfather asked her to tell him a story. Sai told him a story which was replete with dragons, princess, talking parrots and hidden gold. When her grandfather came to know that Sai had made up the story herself, he was greatly impressed with her creative ability.

Question 5.
“Sai Froze”. When did this happen?
Answer:
One day, Sai stepped on a book by mistake as she entered the library. Her grandfather ordered her to stop right there. Sai got scared. She stood there without moving.

C2. Answer the following questions and share your responses with your partner:

Question 1.
How would Sai draw the attention of her playmates while they made fun of her?
Answer:
Sai was a fat girl. Her friends made fun of her saying that she could not run. She was not active and would make their team weak. But, she drew the attention of her playmates by telling them interesting stories and making them enact the roles as she directed.

Question 2.
What fascinated Sai as a child?
Answer:
Sai was greatly fascinated by ‘doll’s wedding’, a traditional game played by Maharashtrian girls.

Question 3.
Why is the word ‘mother’ given within the inverted commas in the sixteenth and seventeenth paragraphs?
Answer:
‘Mother’ here refers to the little girl Sai. She was role-playing the character of a bride’s mother in a marriage of dolls celebrated like a real wedding.

C3. Some statements are given below. Some are true and some are false. The tick of ‘T’ or ‘F’. Also, indicate in the box the paragraph number in which you can find your answer.

Question 1.
Sai’s drawing the attention of the playmates.
Answer:
The usual sight of grandpa and Sai playing together.

Question 2.
A grandfather telling her to treat books with respect.
Answer:
Sai’s telling a story to her grandfather.

Question 3.
The usual sight of grandpa and sai playing together.
Answer:
A grandfather telling her to treat books with respect.

Question 4.
The wedding of dolls.
Answer:
Sai’s drawing the attention of the

Question 5.
Sai’s telling a story to her grandfather.
Answer:
The wedding of dolls.

C5. Read and discuss your responses with your partner. Then write:

Question 4.
Describe the incident in the library.
Answer:
All the members of the Paranjpye family had great respect for books. One day Sai stepped on a book by mistake as she rushed into the library. Her grandfather became very angry. He ordered her to stop right there. He said that she had done a great mistake.

Question 5.
How was Sai able to win over her friends?
Answer:
Sai was a little plump. She was not very active physically. So, her playmates used to make fun of her. They did not allow her to play with them. Sai used to sit by the sidelines and watch them play. A brilliant idea came to her one day. She called out to them and said she would tell them a story and involve them in a lovely game. All her friends gathered around her. Sai cast a spell of magic. They listened to the fantastic story. They also took roles and acted as she directed. In this way, she was able to win over her friends.

Sai was dressed like a bride’s mother. The bridegroom came on a real horse. The bride was brought to the hall in the midst of religious chantings. Sai played the role of the bride’s mother and wedding of the dolls was celebrated.

C6. Write a paragraph on each of the following topics. Do it in pairs. Prepare first, and final drafts. Then compare them with those of your partner.

Thus, she developed her creative talents. When she was only eight years old, she published her first book of fairy tales – called ‘Mulancha Mera’ (My favorite child). She used to tell fantastic stories to her friends and they were mesmerized by her fairy tales. She even directed them in the dramatization of her stories.

He encouraged her creativity. By the time she was eight years old she could publish her first book of fairy tales. Sai’s love for books also grew with her. She learnt from her grandfather to love and respect books.

Question 3.
The incident of the wedding of dolls.
Answer:
Sai was greatly fascinated by the “marriage of dolls”. It is a traditional game played by Maharashtrian girls. Once, she complained to her mother that she was not having any kind of fun. Her mother gave a surprise to her on that day. When she returned from school, her house looked like a marriage hall.

Her mother dressed Sai as the mother of a bride. The bridegroom arrived on a real horse. The doll of a bride was brought with the religious chanting of mantras. Jaggery and Poha were distributed among the children. The marriage of dolls was celebrated with all pomp and glory.

Vocabulary:
V1. Fill in the blanks with the most appropriate words chosen from, among the ones given in brackets.

Sai was fond of telling stories. Her grand-father was impressed by this talent of hers. Though she was not good at sports, she used to entertain friends with her flights of fancy. Even as a child she had published a book of fairy tales.
[impressed, good, published, fond, flights, tales, entertain]

V2. Some terms that describe people are given below. Classify them under ‘desirable: and ‘not so desirable’ categories. You may consult a good dictionary’ to help you doing this.

V3. Give the negative forms of these words using a prefix. Change the article if necessary.
(short, fast, dim, beginning, young)

An old man appeared on the stage walking slowly at the end of the play, just before the close of the show.Soon, the audience stood up as the lights were switched on. In that bright light, they could see the director, a tad man with an imposing figure

Reading for Information
Task 1. Read the following piece of news and answer the questions.

Jahangir Khan, the legendary squash-player from Pakistan is considered to be greatest player in the history of Squash. He won the World Open six times, and the British open a record ten times. Between 1981 and 1986, he won 555 matches consecutively. This was not only the longest winning streak in squash history, but also one of the longest unbeaten runs by any athlete if any top-level professional sports.
Questions.

Task 3. Compare the given sets of nouns in pairs. Use the adjectives given in the box. Two are done for you
Note : You have got to add appropriate article in some cases,

Task 4. Complete the following sentences using the given adjectives or their comparative / superlative form :

E. Writing: (All The World Her Stage Notes Points)
Descrptive Writing
Task 1. Describe the peacock in about ten sentences using the words given below. 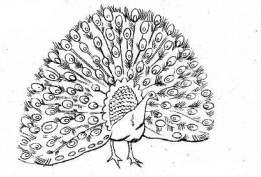 The peacock is our national bird . It is very beautiful. Its body is covered by long green feathers. It has blue eyes. It eats germs, worms and tender shoots of plants. It lives close to villages. It dances before rain. The male peacock dances. Its dance is most attractive. Its blue body is nice to see.

Task 2. Given below is a picture and some sentences describing it. Correct the description and rewrite the sentences so that they match the pictures. 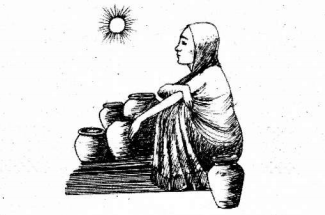 All The World Her Stage Additional Questions and Answers

Question 3.
What did Appa tell Sai during their walks?
Answer:
Appa put simple mathematical questions to her and told her a number of fables such as fairy tales, Arabian Nights and Birbal’s stories.

Question 4.
What kind of a story did Sai tell her grandfather?
Answer:
Sai told him a fairy tale which was full of dragons, princess, talking parrots and hidden gold. She herself had made it up.

Question 5.
How did Appa punish Sai for stepping on a book?
Answer:
Appa ordered her to ask forgiveness of the book.

Question 1.
Sai Paranjpye is a famous theatre personality from
A) Pune
B) Mumbai
C) Calcutta
D) Ahmedabad
Answer:
A) Pune

All The World Her Stage Summary in English

This lesson is a short life-sketch of Sai Paranjpye, a famous theater personality from Pune. When she was 6-7 years girl, skipping along with an elderly gentleman. That gentleman was her grand-father Sir R.P.Paranjpye. He was India’s first senior wrangler. She lost her parents at a young age. She was looked after by her grandfather. She grew up with her grandfather. She called him as Appa. Appa put simple mathematical questions and fables to her. The fables are fairy tales, Arabian Nights, and Birbal’s stories. She liked only stories, not mathematics.

One day Sai asked her Appa to tell a story but he asked her to tell a story. She agreed. She told a fairy tale with dragons, princesses, talking parrots, hidden gold, etc on her own. After hearing the story Appa asked where she had read it. She said that she had made up the story. He was very much impressed. From that day onwards it continued and it was the beginning of a wonderful world of creativity. At that time she was 8 years old. She had published her first book of fairy tales “Mulancha Mera”. Her love for books grew with her. She learned to respect books from her Appa.

Sai was too fat and her mates made fun of her and criticized that she is not fit for any games. Meanwhile, she thought of a plan and called her mates and told a story of magic is¬land full of hidden treasure. They were also ready to take roles and act as she directed.

She was fascinated by dolls wedding, It is a traditional game in Maharashtra. One day Sai’s mother arranged a doll’s wedding. Sai became the bride’s “mother”. The ‘mother ’ that day, so fond of drama, grew up to become filmmaker and theater personality.

All The World Her Stage Summary in Kannada 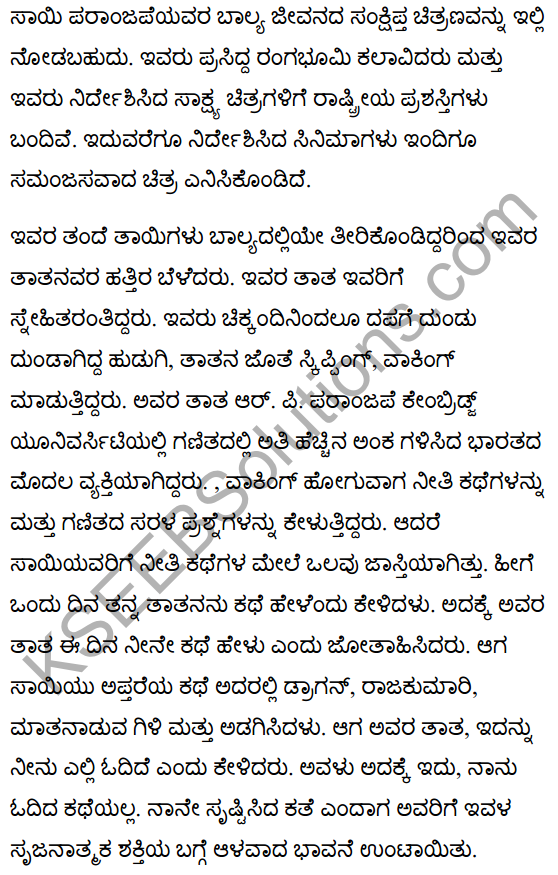 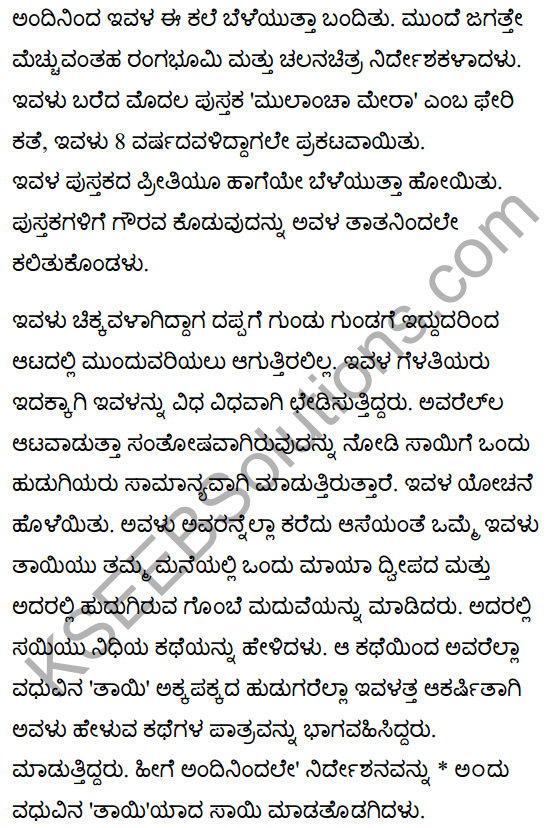 The main aim is to provide quality education for the students of Class 8 English Karnataka State Board Solutions. Class 8 is very important for the students in their career. We hope the information provided in this KSEEB Solutions Class 8 English Chapter 6 All The World Her Stage Questions and Answers is satisfactory for all. Bookmark our site to get the latest information about the solutions.