With the help of the Karnataka Secondary Education Examination Board Class 8 English Solutions Chapter 8 Luther Burbank Questions and Answers Pdf, Notes, Summary you can get an idea about the subject. Also we suggest the students keep the textbook aside to learn the subject in depth.

C1. Answer the following questions and share your responses with your partner

Question 8.
What is grafting?
Answer:
Grafting and budding are horticultural techniques used to join parts from two or more plants so that they appear to grow as a single plant. In grafting, the upper part (scion) of one plant grows on the root system (rootstock) of another plant.

C2. Which of the following things was Burbank able to do because of his e experimentation. Tick off (√)against true statements and an (X) against others.

Question 1.
How did Burbank’s genius benefit the life of the common man?
Answer:
A common man’s day-to-day life has been greatly affected by Burbank’s genius. He developed an improved cherry, a thornless blackberry, a thornless cactus now used as fodder for livestock, and a peach tree that can tolerate freezing temperature. He developed seventy-three new flowers including the Shasta Daisy and a rose.

Question 2.
Why did Burbank more from Massachusetts to California?
Answer:
Burbank realized that the climate of his native place was not suitable for his work. The weather in the State of California was mild; the soil was rich and varied. So, he moved to ‘Santa Rosa’ in California.

Question 3.
What did Burbank call his new home? Why?
Answer:
He called his new home as “The chosen spot” because the climate and the soil were most suitable for his experiment as far as nature was concerned.

Question 4.
How did grafting help Burbank in his experimentation?
Answer:
He was able to grow several thousands of different varieties of fruits. His wonderful achievements were made possible by grafting many twigs on a single tree. In this manner, he was able to grow 526 different types of apples on the same tree. It was possible to save space to grow that the plants get fruits in just 2-3 years. Like this, the grafting helped Burbank in his experimentation.

Question 6.
What were Burbank’s experiments on cherry, blackberry, cactus, and Shasta daisy?
Answer:
Burbank conducted experiments on growing different varieties of cherry on a single tree. He caused desert cactus to grow a thousand times faster. He developed an improved cherry, a thornless Blackcherry, a Cactus without thorns. He developed 73 new flowers including the Shasta Daisy and a rose.

C4. Write a paragraph on each of the following.

Question 1.
Write a note of Burbank’s early life.
Answer:
Luther Burbank is a well known U.S. plant breeder. He was born on 7th March 1849 He was brought up on a farm in the state of Massachusetts. He was attracted to the wonders of nature and learned the techniques of growing various crops and plants during his early years. When he was 21 years old, he started market gardening and was successful.

Question 2.
Describe the three techniques on which Burbank’s experiments were based.
Answer:
Luther Burbank’s experiments were based on three basic techniques. First, he would collect a variety of domestic plants and bring in many foreign varieties of plants. He would grow them under different conditions. These plants would prove to be strong, plentiful, and sometimes showed new qualities and other desirable changes.

Secondly, he grew many varieties of fruits, flowers, and vegetables by changing water, food supply, temperature, light or space. He even crossed plants to produce plants with dissimilar traits and variations. Lastly, after the production of different varieties, he would choose the plants that showed desirable changes. He would also use them for further experimentation.

Question 3.
How did Burbank react when some of the efforts ended in failure?
Answer:
Burbank set up a nursery garden, greenhouse, and experimental farms in Santa Rosa, California. He conducted more than 10,000 experiments with 600 different kinds of plants. Many of his experiments were failures. Once he crossed a tomato with a potato. He was able to grow a vegetable, but it was not of any use. When he failed, he was not disappointed. He had patience, perseverance, and devotion that nothing could dishearten him.

VI. Look at the following phrase and see how the two words go together. They are callocative words.

Now fill in the blanks with the most appropriate describing words given in the box below. For a few, you may have more than one combination.

V2. Give below are some names. Classify them into categories of flowers, fruits, and vegetables you may consult a dictionary/encyclopedia if you need it.

Question 1.
Where and when was the drunken monkey noticed first?
Answer:
The monkey was first noticed in the village of Shettykere, a month ago.

Question 2.
How did addiction affect the monkey? (see paragraph 2)
Answer:
The monkey often gets high and it has also become indiscriminate in its eating habits and has put on weight and become aggressive after addiction of alcohol.

Question 3.
You may have come across new words in the news report. The words used, meanings and paragraph numbers in which they appear are given. Find out and write them in the blanks provided,
Answer:

Question 4.
Match the phrases with their meanings:

B Grammar:
The Passive Voice
Task. Match the names in the left-hand column with the discoveries/invention/composition etc, in the right-hand column. Then write sentences in both active and passive voice using the agent and appropriate verb.

C.Writing:
Task 1.
An outline of a story is given below. Complete the story supplying the required words and phrases.

A cap seller on his way to market stopped under a huge tree. The day was very hot and he lay in the cool shade of a huge tree. He soon took a nap beside his basket of caps. When he woke up, to his horror, he found the basket empty. He thinks they are stolen. However, soon he hears some noises above and when he looks up, he finds monkeys with caps on.

The cap seller makes desperate efforts to recover the caps. When he does not succeed, hopelessness, he, at last, snatches his own cap off his head and throws it down. To his luck, the monkeys do the same and the relieved cap seller picks up the caps and leaves the place feeling happy.

Task 2.
Expand any one of the following proverbs into 5 or 6 sentences of your own.

Question 2.
How was he able to produce the ‘Idaho Potato’?
Answer:
Burbank planted 29 seeds from an early rose potato plant. He produced a new variety of seeds. Its superior quality made it very popular among the local farmers. Today, this potato is called Idaho potato. Even to this day it is grown on thousands of acres in North-western U.S.

Question 3.
How is Burbank’s work equated to present-day miracles in science and technology?
Answer:
In the present times, miracles are happening in steel mills, the automobile industry, markets of commerce and industry, and so on. But, Burbank experimented with the simple elements of nature to produce desirable changes and effects. Hence, his works are as remarkable as the production of shiny cars, bridges, tunnels, etc.

What does the world call a man who turned the yellow flower into red, who made the seeds of plums disappear, desert cactus to grow a thousand times faster, made blackberry into white, who grew 500 different kinds of cherries on one tree? Was he a master gardener or a miracle-working magician.

Fie has been awarded many title, but he was so simple, hardworking scientist.

The products of his genius continue to play a part in the day-to-day lives of people throughout the world. His most important contribution is a lovely flower that never existed before him.

He was born on 7th March 1849. Fie was attracted towards the wonders of nature and learned the techniques of growing various crops. After reading Darwin’s book, he decided to devote his life to grow new varieties of plants.

He started market gardening at the age of 21. He was successful in selling high-quality vegetable. He planted 29 seeds from an early rose potato plant and produced superior quality up to today. This potato is called “Idaho Potato”, it is grown on thousands of acres in North-Western U.S.

He moved to the State of California at the age of 26, because his native place was not suitable for his work. He carried on his experimental and original work on plants for more than half a century on “Santa Rosa” near San Francisco. He described his new home as “The Chosen Spot” of all this earth as for as nature was concerned.

The three basic techniques of his experiments arc
1. collect different kinds of domestic plants and bring in many foreign varieties of plants, when they were grown under different conditions, they would prove strong, plentiful or hard, show other desirable changes.

2. He grew many varieties of fruits, flowers and vegetables by changing water, food, temperature, light or space variations were achieved by crossing plants, which had very dissimilar qualities.

3. He could recognize and select the plants which showed desirable changes. He could also choose them for further experiments.

Thus he was successful to produce a white blackberry and he called it the paradox. The pile of rejected seedlings measured 12 ft high, 14 ft wide,‘22 ft long and had contained 65,000 berry bushes. Among them he decided to keep for further study was less than 2 dozen.

He was able to grow 526 different types of apples on the same tree, ft was possible for him not only to save space but also to speed up his experiments. His experimented plants took only 2-3 years to yield fruits instead of 15 years.

He carried out more than 10,000 separate experiments with 600 different kinds of plants. He developed an improve cherry, a thornless blackberry, a cactus without thorns used as food for livestock and a peach tree that can withstand freezing weather. He delighted flower lovers with 73 new flowers, Shasta Daisy and a rose that bears his name.

Many of his efforts ended in failure. The crossing of tomato with potato was failed. But his devotion was so deep and strong that nothing could disappoint him. Miracles were happening in all the field like in steel mills, automobiles and markets of commerce and industry. Burbank’s discoveries are also as remarkable as the shiny cars, bridges, tunnels and singing wires. 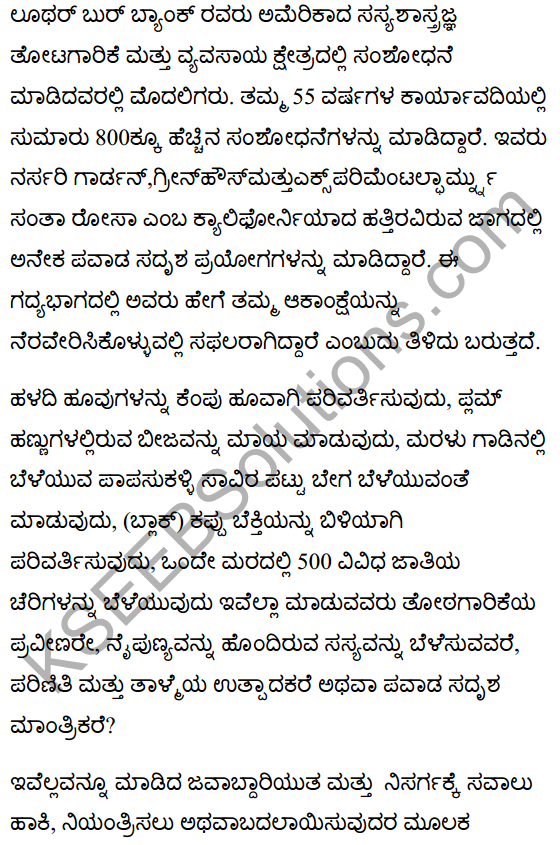 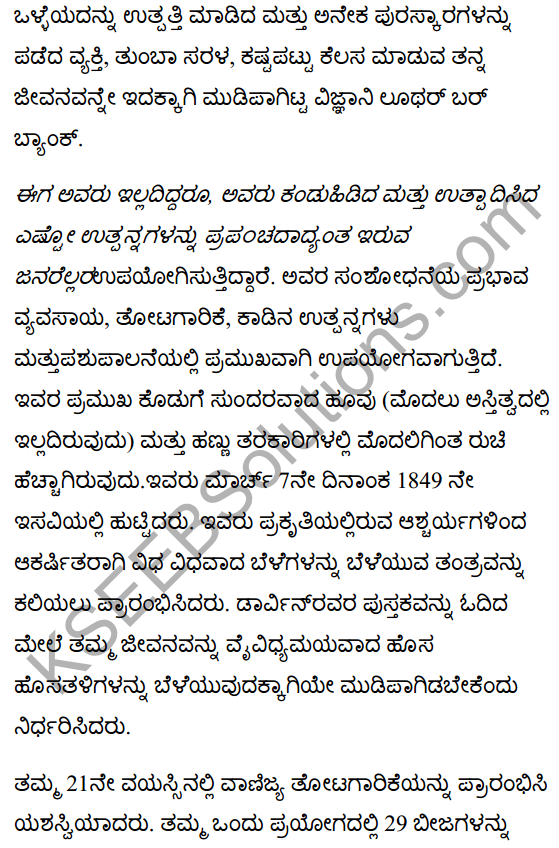 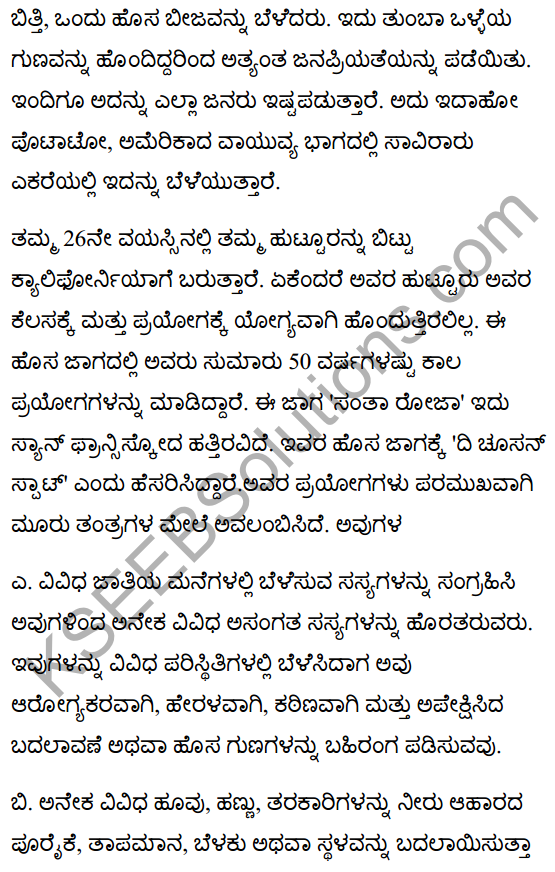 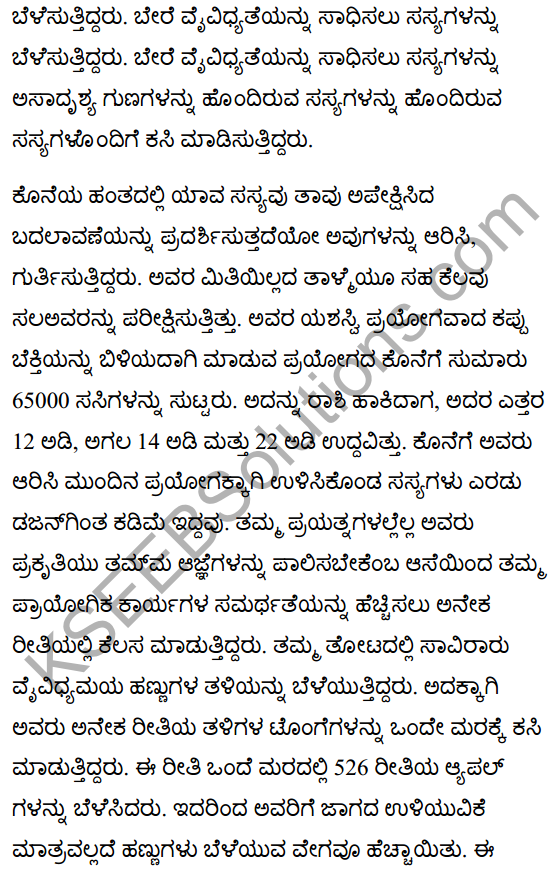 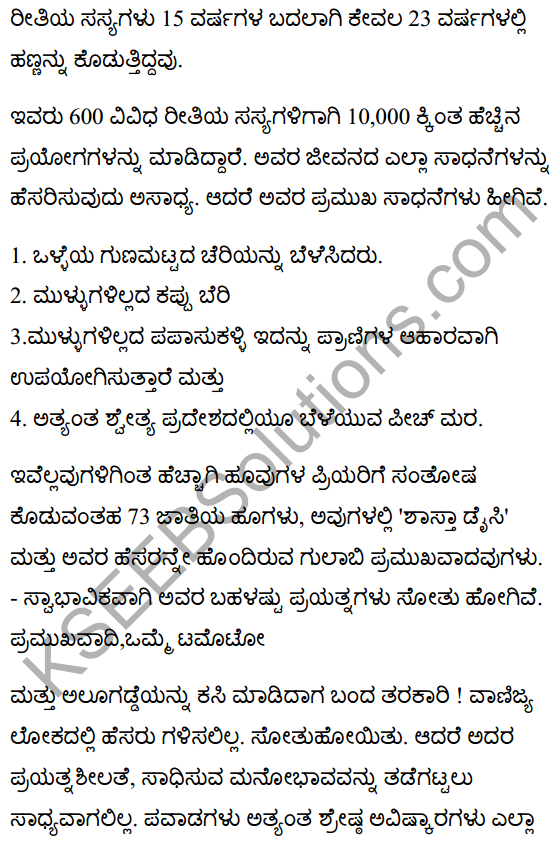 The main aim is to provide quality education for the students of Class 8 English Karnataka State Board Solutions. Class 8 is very important for the students in their career. We hope the information provided in this KSEEB Solutions Class 8 English Chapter 8 Luther Burbank Questions and Answers is satisfactory for all. Bookmark our site to get the latest information about the solutions.