No Men are Foreign Poem Questions and Answers, Notes, Summary

With the help of the Karnataka Secondary Education Examination Board Class 8 English Solutions Chapter 3 No Men are Foreign Questions and Answers Pdf, Notes, Summary you can get an idea about the subject. Also we suggest the students keep the textbook aside to learn the subject in depth.

Question 1.
What does the poet remind us of in the first line of the poem?
Answer:
The poet reminds us that no man is a stranger and no country is a foreign country. All men are the same wherever we go, and all countries are like our own country.

C2. Read and discuss your responses with your partner. Then write:

Question 1.
How do you think we are all treated alike by nature?
Answer:
Nature has given the same physical features and mental abilities to all the people living on earth. It has provided all the natural resources like sun, air and water to the people. People work hard to cultivate lands and produce food in all parts of the world. In each and every part of the earth people lead a common life. There is no discrimination in nature.

Question 2.
Read the third stanza carefully. What message does the poet want to convey to us?
Answer:
People living in different parts of the earth do have eyes like ours – the eyes that help us to wake up in the morning and sleep at night. They have the ability to love and bring about oneness among people. We can see people living a common life wherever we go. Therefore, we should develop a sense of equality and brotherhood among ourselves.

Question 3.
Do you agree with the poet that we should wage no war? How do you justify that?
Answer:
Yes, all should agree with the poet. Because war gives way for hatred ness only. There is no end for this so we should not wage war. The poet mentions in the following line. “To hate our brothers, it is ourselves that I shall dispossess, betray, condemn. It is the j human earth that we defile. Our hells of fire I and dust outrage the innocence of air that an everywhere our own.

Question 4.
Some are of the opinion that the poet might have written this poem after witnessing the bad effects of the Second i World War. Mention some of the lines in the poem to support that opinion
Answer:
The opinion of people about the time of writing this poem might be true. The following lines have a reference to soldiers, war, and its evil effects:

Question 5.
Briefly describe how a war spoils everything.
Answer:
People living in different parts of the earth have isolated themselves on the basis of colour, race, creed, language and country. Though they are all human beings basically, they wage war against one another in the name of race, religion and other factors. Each country wants to establish supremacy over the others.

As a result there is mass destruction. With the use of modern weaponry, lakhs of people are killed, their homes, fertile lands are reduced to ashes. If we recall the devastating effects of the Second World War, we can realize that war brings a lot of misery to the people.

No Men are Foreign Additional Questions and Answers

Question 3.
What are the hells of fire and dust? What do they destroy?
Answer:
Hells of fire and dust are the fire, smoke, and dust from bombs and gunfire. They pollute the air which was given by God to all in pristine purity. The poet reminds us that we have no right to spoil what is commonly owned by all children of God.

Question 5.
What does the poet emphasise by beginning and ending the poem with the same line?
Answer:
When a word, phrase, clause, or sentence is repeated, the repetition is for the emphasis. The poet’s intention is to drive home the truth that thinking of people of foreign countries as strangers is an unnecessary man-made barrier that should be broken.

Question 7.
War is the enemy of our environment. How?
Answer:
When we fight a war and use dreadful weapons against others, we pollute our environment with the dust and the smoke of the guns.

Question 9.
What happens when war breaks out?
Answer:
When we wage war and use dreadful weapons against, others, we defile our own earth. The dust and smoke of guns pollute the very air we breathe.

Question 11.
What are the evils of war, according to the poet?
Answer:
The poet advises people to shun hatred and warfare. The poet says that during peace, people enjoy the harvests and prosper, whereas during war people experience distress and scarcity of food. He further says that when we hate others, we actually rob, deceive and condemn ourselves. When we fight against others we defile the purity of our own earth. The fire and smoke from the weapons of war poison the air which we all breathe and is essential for our existence.

Read the following extracts and answer the questions that follow:

Question 1.
Remember, no men are strange, no countries foreign Beneath all uniforms, a single body breathes Like ours; the land our brothers walk upon Is earth like this, in which we all shall lie.

Question 3.
They, too, aware of sun and air and water,
Are fed by peaceful harvests, by war’s long winter starv’d.
Their hands are ours, and in their lines we read
Labour not different from our own.

Question 5.
Their hands are ours, and in their lines we read
A labour not different from our own.
Remember, they have eyes like ours that wake
Or sleep, and strength that can be won
By love. In every land is common life
That all can recognize and understand.

Question 7.
Remember, we who take arms against each other It is the human earth that we defile.
Our hells of fire and dust outrage the innocence Of air that is everywhere our own.
Remember, no men are foreign, and no countries strange.

Four alternatives are given for each of the following questions/incomplete statements. Choose the most appropriate one.

Question 5.
The force that can win over others’ strength is
A) war
B) love
C) hatred
D) peaceful harvests
Answer:
B) love

No Men are Foreign Poem Summary in English

The authors intended to write this poem is universal brotherhood. According to him all men in the universe are the same and equal. So he is asking us to behave that nobody is stranger and no country is foreign because ail are alike. Though we all look different, we are all having same body. Similarly, the earth where we live and die is same. The Sun, air, and water are all same. We should live with peace it brings prosperity. War brings adversity, it means great suffering for long time. All hands are same and the lines in tire hands are also same. The labor is also not different.

We should remember that all are having same eyes with which we can sleep or awake. We can won all by love. All things should be possible by love. In every way life is common. That all can recognize and understand.

We should remember that whenever we are star hate our brothers, it is our fault. We have no right to condemn others. At the same time we have no right to look down upon anybody or discriminate, against anybody on any grounds. The poet makes a strong plea against the evils of war. By taking up arms, men violate the sanctity of the earth, polluting it with not only dust and smoke, but also hatred. Men must learn to develop a feeling of universal brotherhood. Men must learn that no man is stranger and no country is foreign.

No Men are Foreign Poem Summary in Kannada 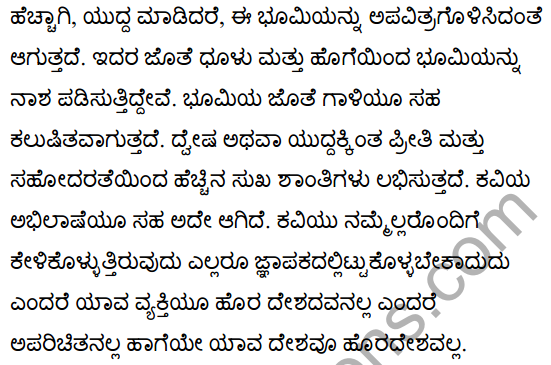 The main aim is to provide quality education for the students of Class 8 English Karnataka State Board Solutions. Class 8 is very important for the students in their career. We hope the information provided in this KSEEB Solutions Class 8 English Chapter 3 No Men are Foreign Questions and Answers is satisfactory for all. Bookmark our site to get the latest information about the solutions.