With the help of the Karnataka Secondary Education Examination Board Class 8 English Solutions Chapter 3 Lal Bahadur Shastry Questions and Answers Pdf, Notes, Summary you can get an idea about the subject. Also we suggest the students keep the textbook aside to learn the subject in depth.

Answer each of the following questions in a sentence or two :

Question 2.
Where did Lal Bahadur have his education after his studies at School?
Answer:
Lal Bahadur joined Kashi Vidyapita at Varanasi, studied 4 years, and got the degree of ‘ Shastry’ after his school education.

Question 6.
How did he respond to Pakistan’s attack? When Pakistan attacked, Shastry declared in the-Parliament: force will be met with force’. He gave freedom to the army to take action against Pakistan and teach it a lesson. The Indian army won the war This was the response of Shastry, We could never forget.

II. Answer each of the following in a paragraph of 10 12 sentences :

Question 1.
Give an account of Lal Bahadur’s education.
Answer:
Lal Bahadur had his school education at Mughal Sarai. Then he went to Varanasi and joined Kashi Vidyapita. He studied there for four years. He was good in subjects like Philosophy, Economics, Political Science and Social Science. He got the degree ‘Shastry’ from Kashi Vidyapita. He was so poor that he did not have enough money to buy a bicycle. He used to walk eight miles each way, and maintain himself with only two and a half rupees a month.

Question 2.
Narrate any one incident from Lal Bahadur’s life which highlights his honesty.
Answer:
Lal Bahadur was imprisoned for participating in the freedom struggle. When he was in prison his daughter fell ill with smallpox. Lai Bahadur requested the jail authorities to permit him to go and see his ailing daughter. The then government granted him parole for fifteen days on condition that he would not take part in any agitation. But, he refused it. He asked them to release him on parole without any condition. The government agreed to it.

Unfortunately, his daughter died on the day of his visit. He performed her obsequies and decided to return to prison. His family members requested him to stay at home for the rest of the parole period. He said the parole was given for the sake of his daughter. Since she was dead he felt it was not right to stay back. He went back to prison.

Question 3.
Imagine you are supposed to speak on the life of Lal Bahadur Shastry and you are given not more than 3 minutes for your speech. Note down the points based on which you can develop your speech.
Answer:
Example: Lal Bahadur’s sincerity

Good morning to Respected people on the dais, my beloved teachers and comrades, Lal Bahadur Shastry was one of the greatest sons of our motherland. He was born on 2nd October 1904.
[Like this you start your speech the following are the points, you have to expand]

1. His sincerity
a) with the mango seller
b) his resignation

2. His Education
a) Subjects
b)degree

5. His personal life
(a) Simplicity

6. As a Prime Minister
(a) Pakistan War
(b) official Language

I am thankful to all those who for giving me this opportunity and thanks to all of you for listening to me with patience. Jai Hind Jai Karnataka.

Lal Bahadur Shastry was born on October 2, 1904 (He shares his birthday with Mahatma Gandhi), at Mughal Sarai. He was born to Sharada Prasad and Dulari Devi. He was brave, kind, and full of courage. Even as a boy, he was very kind to other people. Once, when he was taking a stroll with his uncle he was accosted by an old man who was selling fruits. The vendor offered to sell them a hundred fruits for an anna, as it was getting dark and he had to go back home. Lal Bahadur took pity on him and gave him one anna for the fruits and took them without even counting them.

After his school education, he joined Kashi Vidya Pita and studied there for four years. He was bright in subjects like Philosophy, Economics, Political science, and Social science. He was awarded the degree ‘Shastry’ while he studied at Kashi Vidyapita. He had to live on a meager two and a half rupees per month while he was a student.

Later he joined the Indian National Congress and participated in the Non-Cooperation movement and Dandi March. After Independence, he served as Home and Transport minister in U.P. Later he was appointed as Prime minister after Pt. Nehru’s death.

Once, before Independence, his daughter contracted smallpox. It was a dreadful killer in those days. At that time, Shastry was imprisoned. He sought permission to visit his daughter. The British Government agreed to release him on parole for 15 days on condition that he should not participate in any agitations. He refused to accept such conditions and wished to stay in prison. But eventually, the Government agreed and released him without condition. He came back home but unfortunately, his daughter died on them someday. After performing her funeral rites, he decided to return to prison, even when there were four days of parole left.

When Lal Bahadur Shastry was a Railway minister he made a lot of effort to reduce the vast difference between the first and last classes in the railway coaches. He made efforts to provide more facilities to travelers in the last class coaches and to eliminate thefts on trains.

Even as a Prime Minister of India he led a simple life. When he was a Railway minister, he accepted moral responsibility for a railway accident at Arialur had resigned for the ministry. When the country was facing a food shortage, he and his family ate only one meal a day and he also urged people of the country to eat less. When he was a Prime Minister, he could not even afford to own a car and had to buy a car after seeking a loan from the

hire a cook to cook food for his family. Although Shastry was physically weak he was strong in mind and action. He was tactful but firm and took bold decisions. When citizens of India started agitating when the Government made an effort to force Hindi on them by making it a sole official language he announced that English would continue to be’ an associate official language.

He was daring enough to give a free hand to the army to act against Pakistan when it attacked Jammu and Kashmir. India won the war. 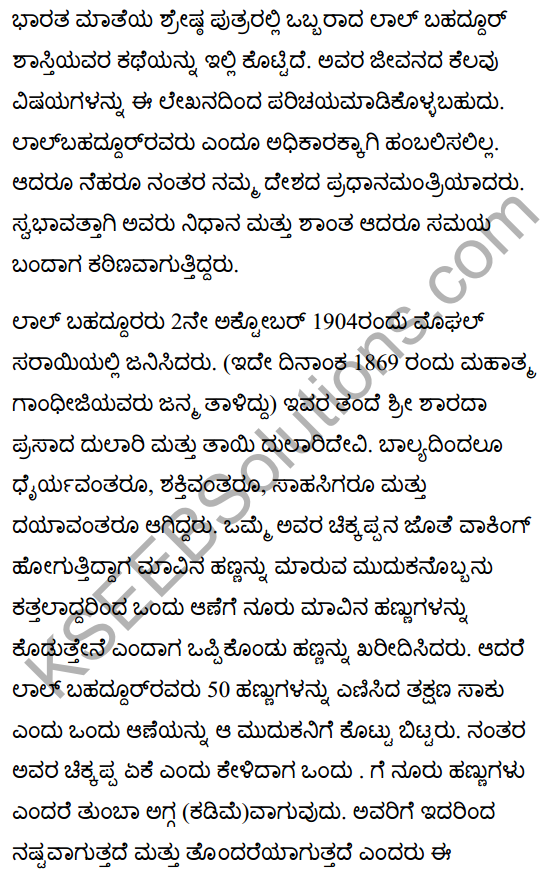 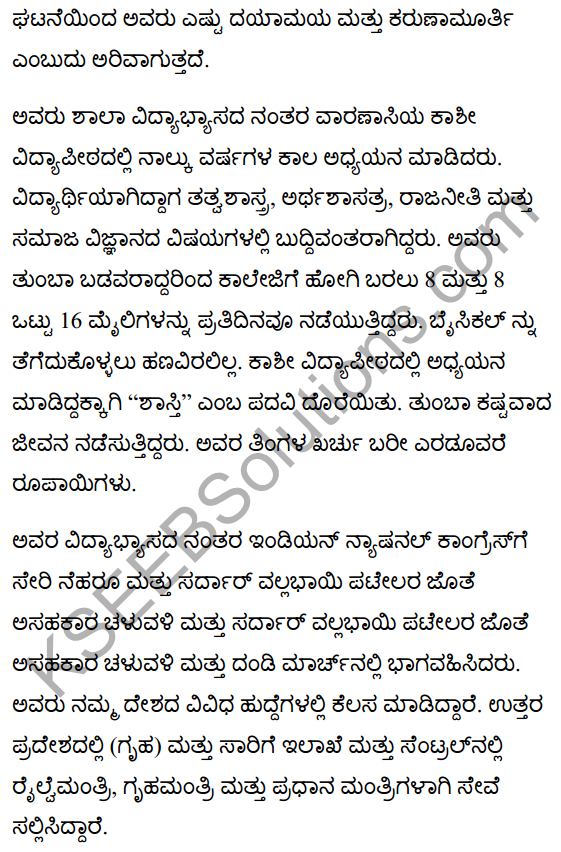 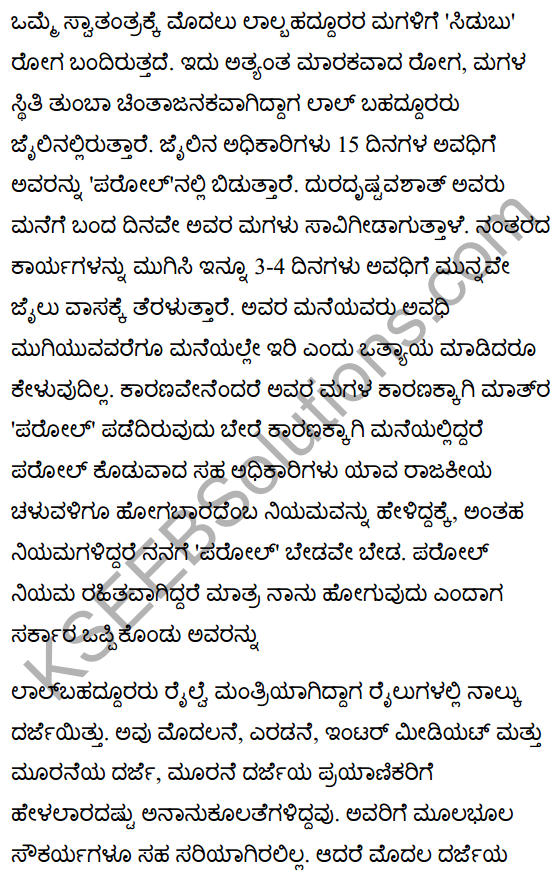 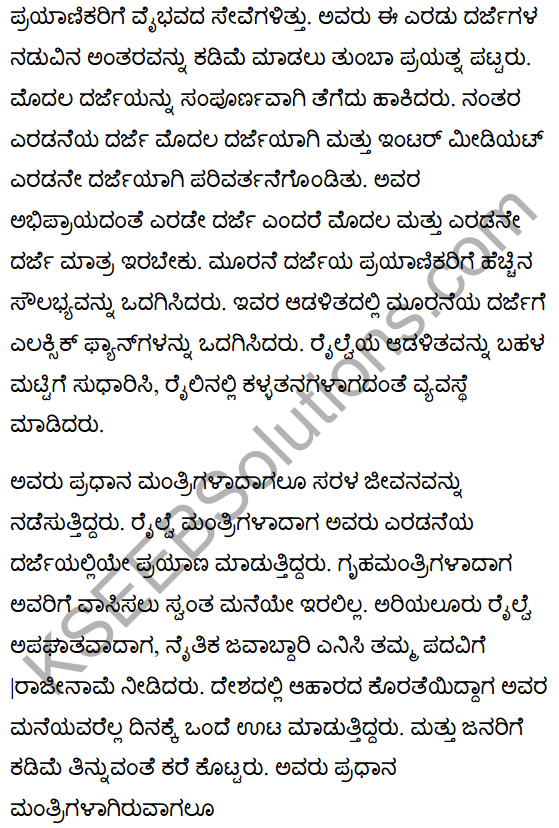 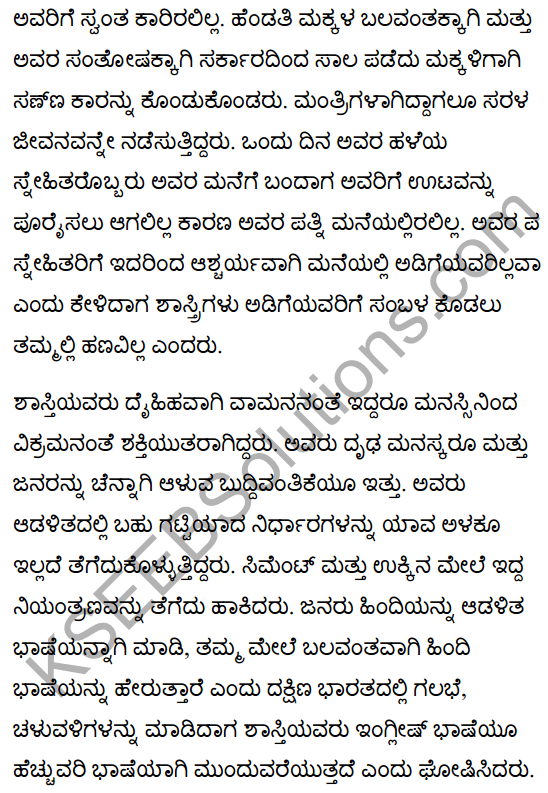 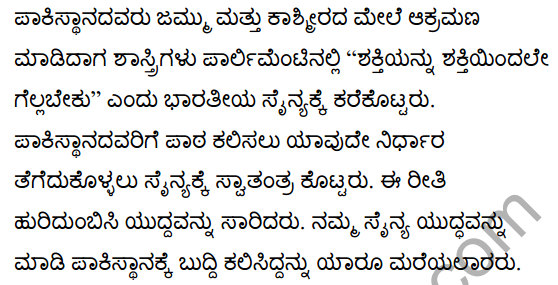 The main aim is to provide quality education for the students of Class 8 English Karnataka State Board Solutions. Class 8 is very important for the students in their career. We hope the information provided in this KSEEB Solutions Class 8 English Chapter 3 Lal Bahadur Shastry Questions and Answers is satisfactory for all. Bookmark our site to get the latest information about the solutions.