The First Woman in Space Questions and Answers, Notes, Summary

With the help of the Karnataka Secondary Education Examination Board Class 8 English Solutions Chapter 4 The First Woman in Space Questions and Answers Pdf, Notes, Summary you can get an idea about the subject. Also we suggest the students keep the textbook aside to learn the subject in depth.

I. Answer each of the following in a sentence or two.

Question 1.
When did Valentine go round the earth? What was great about this event ?
Answer:
Valentine went round the earth on 16th June 1963. She was the first woman travelling successfully in the space ship Vostok VI

Question 5.
Apart from flying, what were Valentine’s hobbies?
Answer:
Apart from flying she was interested in music and literature. She loved reading. She had all the safe and nice qualities of a woman. More than anything else, she loved a happy and quiet homely life.

II. Answer each of the following in a paragraph of about 80-100 words.

Question 1.
Imagine you are asked to interview Valentine Tereshkova. Prepare a list of questions you would like to ask her.
Answer:
Self-assessment
[Note: Here only model questions, other questions could also ask i.e. according to your thinking]

Question 2.
You must have read about Kalpana Chawla. Write in a paragraph the similarity and the contrast between the flights of Tereshkova and Kalpana Chawla.
Answer:
Valentina Tereshkova and Kalpana Chawla, both of them went into space on fact-finding missions. Valentina went alone in a spacecraft called Vostok VI. She went round and round the earth for three days. She returned to the earth safely. Kalpana was the first Indian born woman to rocket into space on a NASA fact-finding mission on November 16, 1997. Along with her, there were six other astronauts. They made 252 orbits of the earth and remained in space for about 400 hours. They conducted more than 80 experiments in space. During their return journey, the spaceship developed some technical snag and broke apart barely 11 minutes before it was scheduled to land, killing all the crew members.

Question 3.
What do you think youngsters like you can learn from the life of Valentine Tereshkova? Discuss and write.
Answer:
Though Valentina was born into a poor family, she rose to fame through hard work. She was not deterred by poverty. At a young age, she worked in a tire factory and a textile mill to help her mother. At the same time, she attended a school in Yaroslav. She trained herself in parachute jumping and excelled in that. Her boldness and daring nature helped her to get into a space training school.

She showed keen interest and made efforts to learn everything. She was an earnest and hard-working woman. She was ready to undergo any kind of hardship to fulfill her dream. Apart from being strong and fit she was soft and possessed all the nice qualities. She loved reading and listening to music.

The present-day youngsters should also learn from her example. They should become brave, daring, and hard working. They should have determination, perseverance, and make sincere efforts to fulfill their dreams.

The First Woman in Space Additional Questions and Answers

Question 3.
Which of these was not a hobby of Tereshkova?
A) flying
B) reading
C) music
D) dancing
Answer:
D) dancing

The First Woman in Space Summary in English

The given lesson ‘The first woman in Space’ is about a saga of an adventurous woman, Valentine Tereshkova, who becomes the first woman to travel in space.

Valentine Tereshkova, was from a humble family, born on March 6, 1937 at Maselennikovo in the Soviet Union. She was lovingly called ‘Valya’. Her father was a tractor driver and died at the front during WWII. Then the family faced poverty and Valentine had to work in a tyre factory to help maintain the family. In 1960, she graduated in a trade school and also had been trained as in parachute jumping in Yaroslavl Acre club She was inspired by Yuri Gagern’s first space flight and determined.

She remained in the spaceship, Vostok VI, speeding around the earth for three days. Then she returned to the earth safely except hurting her nose a little while landing by a parachute in Soviet central Asia.

Valentine showed the world that a woman had better stamina and endurance than a man. She was happy over her success. Valentine’s space flight will be recorded in the history of civilization as one more triumph of the human spirit.

The First Woman in Space Summary in Kannada 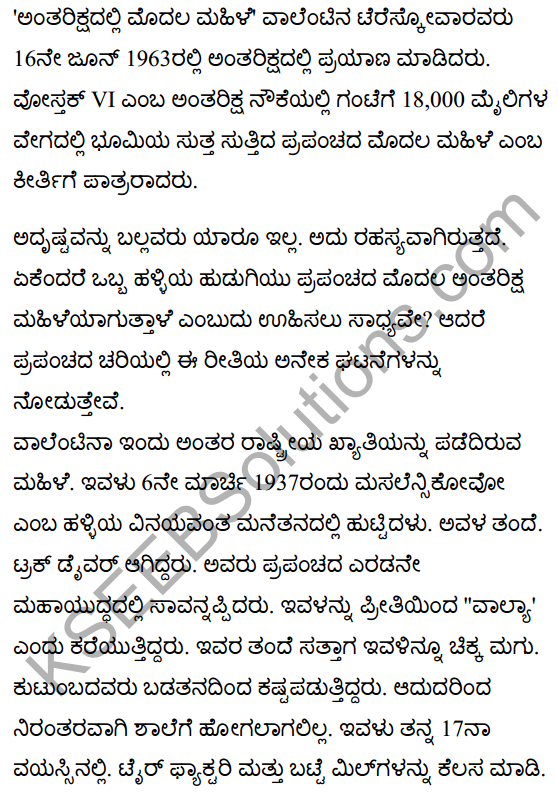 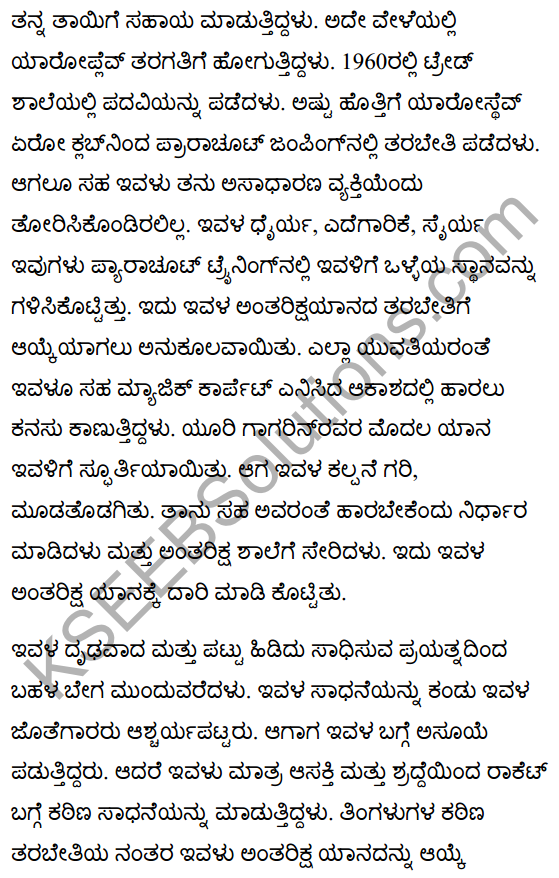 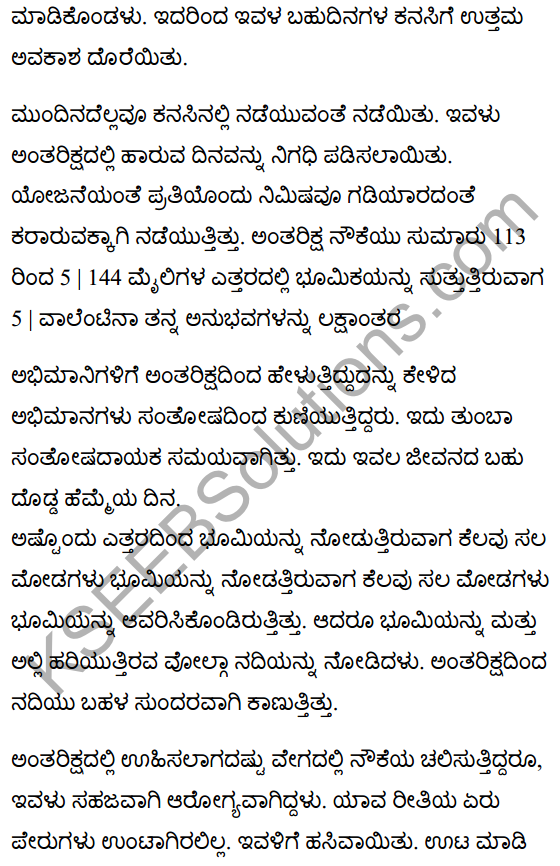 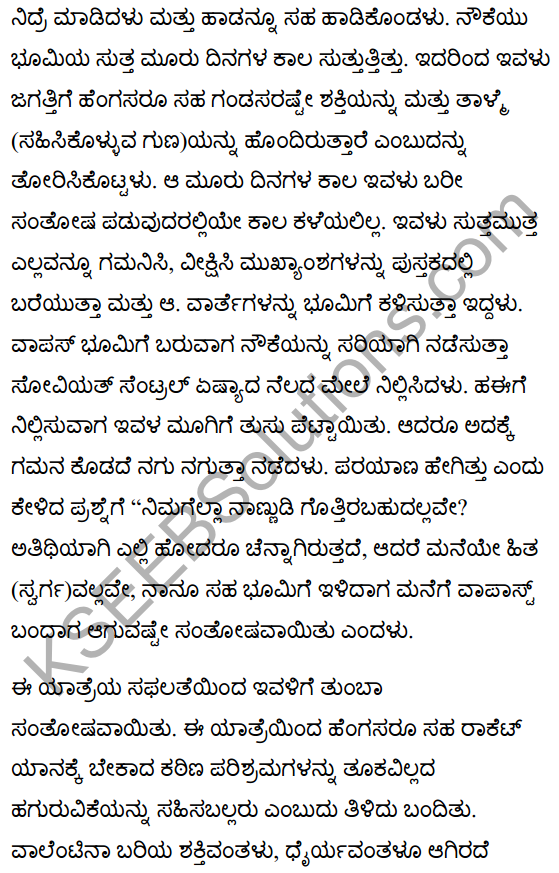 The main aim is to provide quality education for the students of Class 8 English Karnataka State Board Solutions. Class 8 is very important for the students in their career. We hope the information provided in this KSEEB Solutions Class 8 English Chapter 4 The First Woman in Space Questions and Answers is satisfactory for all. Bookmark our site to get the latest information about the solutions.