By understanding the academic needs we have prepared the Karnataka State Board English Class 9 Solutions Chapter Wise. Our aim is to help the students by providing the question and answers chapter wise and help them to gain a good score in the exams. Before you start your preparation go through the chapters covered in this academic. So go through them and Download KSEEB Solutions for Class 9 English Supplementary Chapter 2 Happy Cure Question and Answers Pdf for free.

The topics covered in Karnataka Secondary Education Examination Board Class 9 Solutions for English Chapter 2 Happy Cure. The KSEEB Solutions Class 9 English Solutions Chapter 2 Happy Cure Question and Answers are prepared according to the latest edition.The Chapterwise page will help the students to revise the syllabus during the exams.

I. Answer the following questions in about two or three sentences each:

Question 1.
“The king was foolish.” Do you agree with this statement? Justify your answer by quoting one incident from the text.
Answer:
Yes. I agree with this statement that the king was foolish. The King claimed that he was at death’s door. But the truth of the matter was that he was suffering from nothing to do. He was being bored to death. Of course, he would not admit this. He groaned and moaned and complained of sharp stabs in every muscle and sticking pains, in every bone in his body. Physicians and surgeons came from far and wide. They looked down the king’s throat, they tapped his chest, and they felt his pulse. But they could find nothing wrong. The King called them ‘dolts’ and asked to bring ordinary doctors. So we can say that he was foolish.

Question 3.
What did the simple woman say to the king after she peered into his face?
Answer:
The simple old woman peered into the King’s face for, a long time. Then she said, “your majesty, you are suffering from a rare and strange disease. So rare and strange, that no name exists for it.

Question 4.
‘You will be cured instantly’, said the simple old woman. What was the cure suggested?
Answer:
When the King asked the old woman whether there was any cure for his disease, she told him that he needed to sleep one night in the shirt of a happy man and he would be cured instantly. Here ‘cure’ suggests a remedy and act of curing for the disease of the king.

Question 7.
Why did the king hang his head in shame? What did he resolve afterward?
Answer:
A little stable boy came to the king and told that he had found a happy man. He told the king that “the cure was right here all the time-right at hand-right on the Palace grounds”. He had found a happy man who loved his fellow-men, owned but little and wanted less, but who didn’t possess a shirt. Realizing his stupidity, the king hung his head in shame. He resolved to be a good king and henceforth, to help his people, to rule wisely and well. He never fancied himself ill again for he became too busy for such a folly.

Question 8.
Do you think the little of the story is appropriate? Give reasons.
Answer:
The title of the story ‘The happy cure’ is appropriate. The king appeared foolish in the beginning. At the end he realized his folly. He never fancied himself ill again. He resolved himself to be a good king and ruled wisely. His fancied disease was cured in a simple way from the example of a happy man. So the title is suitable.

Question 9.
“People who have nothing to do are bored to death.” Explain this statement.
Answer:
Man’s mind never keeps idle. Something will be running in his mind continuously. These thoughts must be put into action by man. He is supposed to be a very busy man. When so many works is waiting around him to bp done, he must do it. Being laze if he does not do it, he will imagine the unwanted and uncurable idea. One such thing is the imagination of the king that he is ill.

Question 10.
Suggest another title to the story.
Answer:
“A good realization.”

Question 1.
What did the king threaten to do to the next examiner, if they could find nothing wrong with him?
Answer:
The king said that the next one who examines him and finds nothing wrong, would have his ears cut off and his nose shortened.

Question 2.
What was the report given to king by the persons who went west?
Answer:
The people in the west might be happy if they did not have to work so long and so hard. So they might have a little time to enjoy singing and dancing.

Once a foolish King lay dying. He said he was at death’s door. But the real fact, that he felt was suffering from having nothing to do. That was the cause he was being bored to death. He suffered pain in every muscle, and bones in his body. Physicians and surgeons came from far and wide. They examined him thoroughly but they could not find anything wrong.

Finally, a simple old woman was brought to the royal bedchamber. She peered into King’s face for a long time and told him that he was suffering from a strange and rare disease. To avoid this disease, he needed sleep but one night in the shirt of a happy man.

Thus the reports came to the King and he read them carefully, but the messengers did not return to the King. One day a messenger saw a stable boy who was singing happily. He enquired the boy what made him singing so merrily.

He replied that he loved his fellow man and he owned a little but wanted less, Therefore he was a happy man and liked to sing. The messenger exclaimed that there he found the happy man. He told the boy that the king was ill and he needed to sleep one night in the shirt of a happy man.

He ordered him to give his shirt, but the boy instead of giving his coat ran away to the palace and went right into the royal bedchamber. The king asked him what work he had there to come in. The boy told him that the cure for his ill was right, therefore, all the time, right at hand, right on the palace ground.

He said he loved his fellowman, owned but little and wanted less, but he didn’t possess a shirt. On hearing the boy, the king hung his head ashamed. He agreed that the cure had been here and could cure his own folly. He decided then and there to be good king, to rule wisely and well. He never fancied himself ill. He became too busy for such folly. So he lived to ripe old age. 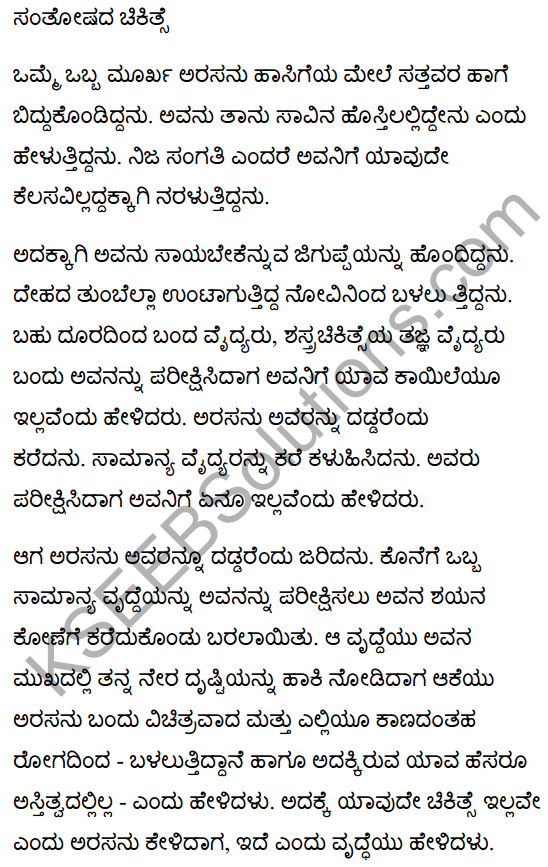 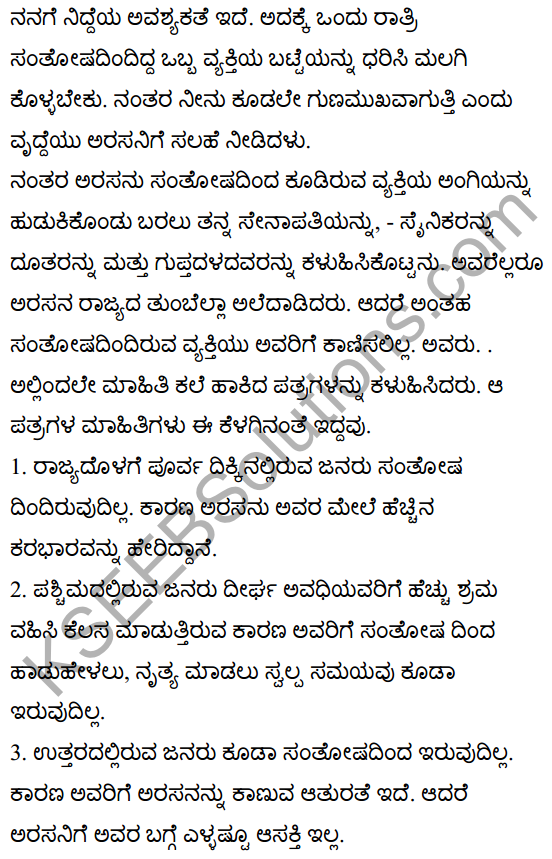 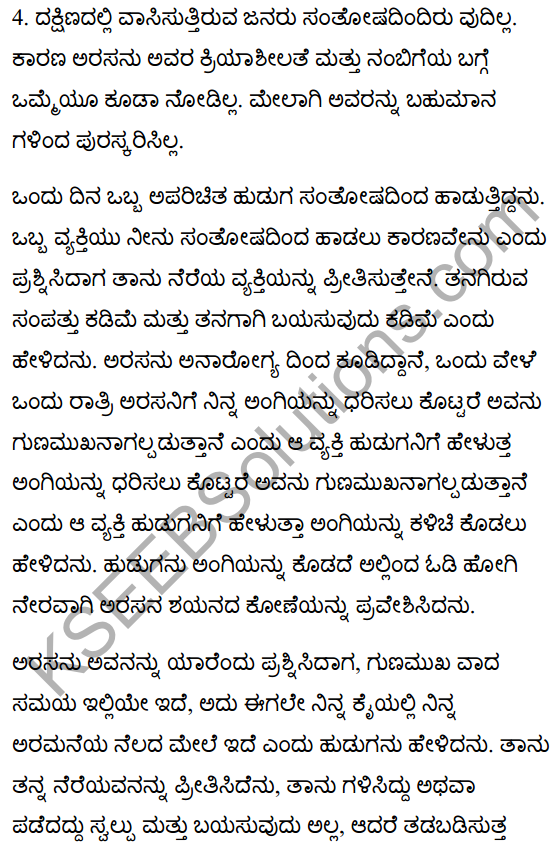 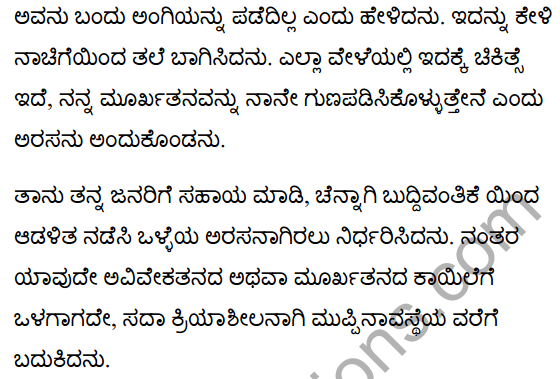 We hope the information prevailed in this article is helpful for all the students of Class 9. The Karnataka State Board Solutions for Class 9 English Chapter 2 Happy Cure Question and Answers pdf enhance your skills and score good marks in the exams. Stay tuned to get the latest information about the KSEEB Solutions Class 9 English Solutions.