By understanding the academic needs we have prepared the Karnataka State Board English Class 9 Solutions Chapter Wise. Our aim is to help the students by providing the question and answers chapter wise and help them to gain a good score in the exams. Before you start your preparation go through the chapters covered in this academic. So go through them and Download KSEEB Solutions for Class 9 English Supplementary Chapter 4 Monday Morning Question and Answers Pdf for free.

I. Answer the following questions in one or two sentences each:

Question 1.
How did Tom feel to Monday Morning?
Answer:
Tom felt miserable on Monday morning as it always found him so, because it started another week’s slow “suffering in school”.

Question 2.
Why did he want to he sick?
Answer:
Tom wanted to be sick to stay home from school.

Question 4.
Why did he start groaning?
Answer:
He started groaning with considerable spirit so that his younger brother Sid would take the news to his aunt.

Question 5.
What did he want Sid to do?
Answer:
He wanted Sid to his aunt about his ailment.

Question 6.
Was there anything really wrong with his toe?
Answer:
Nothing was wrong with Tom’s toe.

Question 9.
What did he complain of next?
Answer:
Next, he complained of tooth-ache.

II. Answer the following questions in two or three sentences each:

Question 1.
What did Tom begin to investigate? Why?
Answer:
Tom began to investigate the ailments in his body. He detected some slight pain in the stomach, tooth aching, pain of sore toe. Because he wanted to stay at home, not going to school.

Question 4.
How did Aunt Polly pull out Tom’s tooth?
Answer:
Aunt Polly tied one end of the silk thread fast to Tom’s tooth with a loop and tied the other to the bedpost. Then she seized the pan of burning coals and suddenly thrust it almost into Tom’s face. He jerked back and the tooth hung dangling by the bedpost. Like this, she pulled out Tom’s tooth.

Question 2.
What was Tom’s last investigation of ailment?
Answer:
He investigated the sore toe problem and made a plan and started to groan.

Tom Sawyer was a schoolboy. It was Monday morning. He was feeling miserable when Monday Morning started he felt nervous because he thought another week started a show and he had to suffer in school. After Sunday, that was a holiday, it was very painful for him to go to school on Monday. To avoid school, he tried some ways. He thought to presented to be sick so that he could stay home from school. But he had to find reasons for his sick. He wanted to pretend to suffer from stomach pain. But it had a little success because the pain might go feeble soon. So he thought that the plan could not work.

Then suddenly he discovered another thing. One of his upper teeth was loose. This was the lucky way for his plain. He was about to begin to groan. But he thought once again. If he told about his loose tooth, his aunt would pull it out and that would hurt him. So he kept this plan in reserve. He investigated another plan. He eagerly drew his sore toe from under the sheet and held it for inspection. It seemed to him a promising ailment (painful disease). Now he had to produce the symptoms.

But he died not to know suitable symptoms. However, at last, he thought of falling to groan on the bed. First, he wanted his half brother, Sid to tell his aunt about his ailment. But Sid slept on very soundly. Tom ground louder and imagined that he began to feel pain in the toes. He shocks Sid to get up from the bed. He groaned louder and louder. This plan seemed to his work well. At last Sid woke up. As he was waking up Tom began to groan again’ and again. Sid in wonder asked Tom what the matter was with him. He pretended to groan again. Sid thought Tom was about to die. Soon he went to inform the auntie.

He informed the auntie that Tom had, something wrong and he was about to die. On hearing this auntie was anxious to know about it and she went to Tom immediately. When she reached there her lips trembled to look at Tom. She asked him what the matter was with him Tom said that his sore toe was mortified. The auntie relaxed from the tension. She understood his pretense. It was nonsense to do so. So she told him that she must get him to stop that nonsense. No sooner did she threaten than stopped groaning and pain disappeared from the toe. Then he used his reserved plan that was tooth pain. Auntie asked him what the matter was with a tooth.

Dental instruments were brought to the room where Tom was in. With the help of those instruments, auntie made Tom’s tooth loose and pulled it out. Then she told him that his tooth was out and he should go to school. She warned him not frighten her like that. 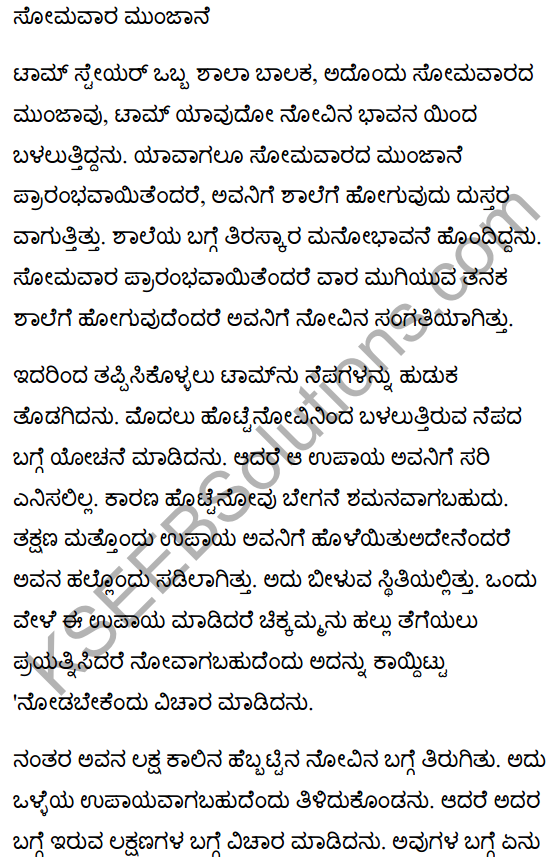 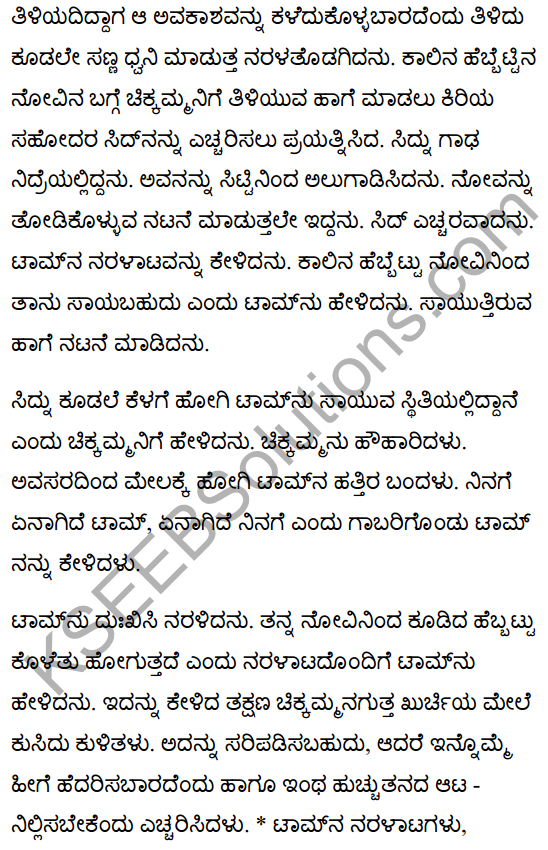 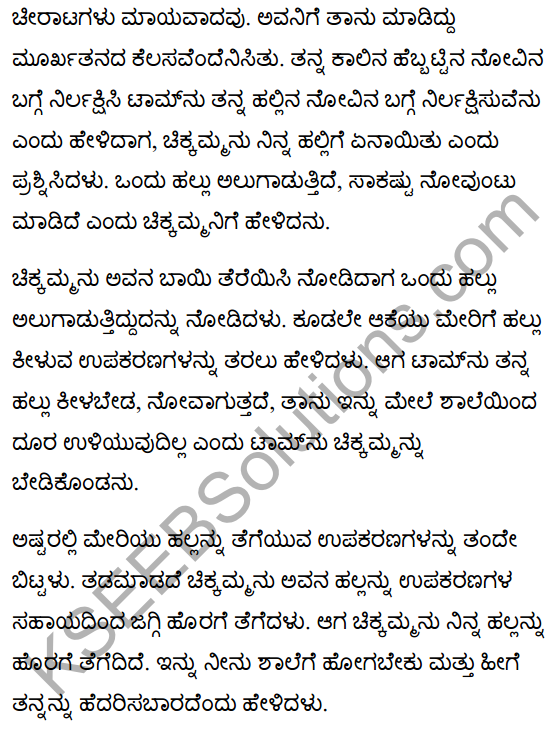 We hope the information prevailed in this article is helpful for all the students of Class 9. The Karnataka State Board Solutions for Class 9 English Chapter 4 Monday Morning Question and Answers pdf enhance your skills and score good marks in the exams. Stay tuned to get the latest information about the KSEEB Solutions Class 9 English Solutions.