I. Fill in the blanks with suitable words.

Question 4.
The king who wrote Amukta Malyada in Telugu was __________
Answer:
Krishnadevaraya.

II. Answer the following questions after discussing with your group :

Question 6.
How can Gawan be considered as the best Prime Minister in Bahamani dynasty?
Answer:
As a Prime Minister, Mohammad Gawan, he took the Bahamani Kingdom to great heights. He learned Muslim religious verses and law at Kairo. He gained proficiency in Arab and Parsi languages. He was responsible for enhancing the glory of the Bahamani kingdom by his efficient administration and victories. He conquered Konkana, Goa, and Belagavi. He invaded Kanchi and plundered its huge wealth. Thus Mohammad Gawan, as a prime minister of Bahamani kingdom was responsible for all-round development of the kingdom.

Another important achievement of Gawan was that he established a madrasa (College) at Bidar to encourage the study of Islamic religion and laws. The building of the college was magnificent construction in the Deccan style. In administration, he brought much remorse also.

Gawan converted the existing four provinces in eight units and these provinces were administered by fifteen Sarakars. Sarakars were divided into Paraganas Kotwal, Deshmukh and Desai were the administrators of the Paraganas. The final unit of the administration was the village having Patel, Kulkarni, and guards as staff.

The land tax was the main source of income for the kingdom. Amir-E-xJumlas was the head of revenue authorities. V3 to V3 of the agricultural production was collected as land tax. There were 50 kinds of taxes including house, mines, tobacco, grasslands, trade, employment. The money earned by taxation was used for maintaining palaces, war and bodyguards, construction and maintenance of forts, etc.

Question 8.
Explain the education, art and architecture of the Bahamani sultans.
Answer: 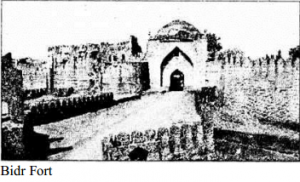 The educational policy of sultans was to propagate Islamic culture. The schools were known as maktab. They were under the control of mosques. The students in the schools were taught the alphabet, religion, law, poetry, etc. The madrasas were centres for higher education. Mohammad Gawan established a madrasa (college) at Bidar to encourage the study of the Islamic religion and law. The college building was magnificently constructed in the Deccan style. Astronomy, grammar, mathematics, philosophy and political science were studied in the college.

The sultans developed the Indo-Sarcenic style of architecture. The Jamia mosque built by Ali Adil Saha I is a magnificent monument and prominent even today. Ibrahim Roza, Gol Gumbaz, Bagan Mahal and Asar Mahal are the important monuments of this period. These famous monuments have made the Adil Shahis world famous. 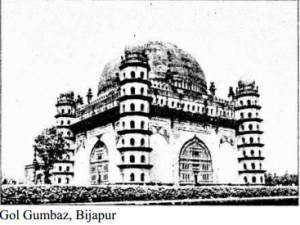 Golgumbaz at Bijapur is one of the greatest structures in the world. It has an area of 1800 sq. ft. There are 7 stories minarets in the four corners of the building. There is huge dome in the center.

Mohammad Adil Shah constructed this monument (1926-1956). The structure is 51 meters, tall and has wide dome. The dome has four piljars in which steps have been built to go up. The unique features of this dome is that if one whispers standing on one side of the dome, it can be heard clearly on the other side. It is the biggest Dome in India. This monument is in Bijapur in- Karnataka.