I. Fill in the blanks with suitable words.

Question 2.
The Union Legislature is called _________
Answer:
the Parliament.

Question 7.
The chairman of Union Public Service Commission is appointed by _________
Answer:
the President

Question 1.
Write a note on the houses of parliament.

Rajya Sabha :
This House is also known as the House of Elders. The Rajya Sabha is a permanent body and is not dissolved like the Lok Sabha. The Term of the members is six years. The number of seats in the Rajya Sabha is 250.

Lok Sabha :
The members of the Lok Sabha are elected directly by the people, so, it is known as the House of People. The maximum number of seats is 545. 543 members are directly elected by the people. Whereas two anglo-Indians are nominated by the President. 79 sets are reserved for SCs and 41 seats are reserved for STs. The Lok Sabha members are elected for a term of five years. However, on the recommendation of the Prime Minister, the President may dissolve the Lok Sabha. During emergencies, the term may be extended for one year.

Question 2.
Write a short note on the structure of Rajyasabha.
Answer:
The composition of the Rajya Sabha is as under :

There are 250 members in the Rajya.

Out of 250, 238 members are elected by the members of the State Assemblies and Union territories. The remaining twelve members, who experts from various fields like literature, art, science, and social work are nominated by the President. This House is also known as the House of Elders. This house is a permanent body and is not dissolved like the Lok Sabha. The term of the members is six years. One of its members retires on the expiration of the six-year term every second year. In their places, new members are elected.

The Vice President is the Chairman of the Rajya Sabha. The Deputy Speaker is chosen from among the members. The House should meet atleast twice in a year.

Question 4.
Explain the election process for the post of the President. 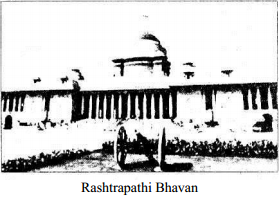 Answer:
The President is elected by an electoral college of elected members of both houses of the parliament, all elected members of legislative Assemblies of all States. His term of office is five years, he can be removed from the office by the Parliament through the motion of Impeachment.

Question 6.
Write a note on the formation of the Union cabinet and its responsibilities.
Answer:
The Union Cabinet is the real Executive and has Ministered in two hierarchies. The first one is a cabinet and the second is the minister of state. The maximum strength of the Union Cabinet is 15% of the total strength of the parliament. The Cabinet has two kinds of responsibilities. The minister of every department is responsible for the administration of his department. He has individual responsibility for the success or failure of his department.

The Union Cabinet has a collective responsibility to the Parliament with regard to the decisions and policies taken by it. Therefore the cabinet is in power as long as it enjoys the trust of the Parliament. When it loses trust, it has to be removed by a No-Confidence Motion.

The qualifications of the Supreme Court judge are :