Question 1.
State the universal law of gravitation.
Answer:
Every object in the universe attracts every other object with a force which is proportional to the product of their masses and inversely proportional to the square of the distance between them. The force is along the line joining the centres of two objects.

Question 2.
Write the formula to find the magnitude of the gravitational force between the earth and an object on the surface of the earth.
Answer:

Question 3.
What do you mean by free fall?
Answer:
Whenever objects fall towards the earth under the gravitational force alone, we say that the objects are in free fall.

Question 5.
What are the differences between the mass of an object and its weight?
Answer:

Question 8.
What do you mean by buoyancy?
Answer:
The upward force exerted by the water on the bottle is known as upthrust or buoyant force.

Question 9.
Why does an object float or sink when placed on the surface of the water?
Answer:
Upward thrust of liquids, (different-in liquid densities) Sink of an object depends upon density. The density of an object is more than water then it sinks. Object density is less than that of water it floats. 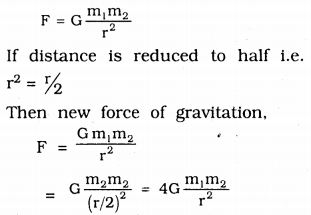 i.e. the force of gravitation becomes 4 times than the original value.

Question 2.
Gravitational force acts on all objects in proportion, to their masses. Why then a heavy object does not fall faster than a light object?
Answer:
Each object falls towards the earth with the acceleration equal to the acceleration due to gravity, which is constant (9.8ms-2) and does not depend on the mass of the object. So heavy object does not fall faster than the light object.

(i) If mass of one object is doubled, then the new force

(ii) If the distance between the objects is tripled, then new force

iii) If masses of both objects are doubled, then new force .

Question 14.
A stone is released from the top of a tower of height 19.6 m. Calculate its final velocity just before touching the ground.
Answer:
h = 19.6 m.
Initial velocity u = 0 (∵ It starts from rest)
From equation of motion.

Final velocity of stone before touching the ground = 19.6 ms-1. 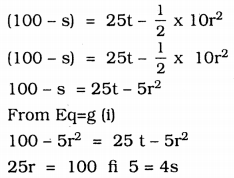 c) In initial 35. the ball will rise then in next 35 it falls towards the earth
∴ The position after 4s(3 + 1)
= Distance covered in Is in the download motion.
From the equation of motion

Question 20.
Why does a block of plastic released under water come up to the surface of water.
Answer:
The buoyant force on an object immersed in a liquid always act in upward direction.

Fill in the blanks with suitable words.
Question 1.
The force that causes acceleration and keeps the body moving along the circular path acting towards the centre is called the _________
Answer:
Centripetal force.

Question 3.
The ________ of an object is the force with which it is attracted towards the earth.
Answer:
weight.

Question 4.
The force acting on an object perpendicular to the surface is called the ___________
Answer:
thrust.

Question 5.
The upward force exerted by the water on objects is known as ________ force.
Answer:
buoyant.

Question 1.
Why is Newton’s law of Gravitation called universal law?
Answer :
It is applicable to all bodies either they ‘ are small or big. Whether they are celestial or terrestrial.

Question 2.
Mention two factors on which the buoyant force acting on an object depends?
Answer :

Question 3.
Why are big boulders can be moved easily by floods?
Answer :
Big boulders weigh less while in water and as such as easily moved by floods.