Question 7.
What are the wavelength, frequency, time period, and amplitude of a sound wave?
Answer:

Question 8.
How are the wavelength and frequency of a sound wave related to its speed?
Answer:
The relation between wavelength (λ), frequency (ν) and speed of the wave (v) is
υ = λv.

Question 11.
Distinguish between loudness and intensity of sound.
Answer:

Question 1.
What is sound and how is it produced?
Answer:
Sound is a form of energy – the sound is produced due to the vibration of different objects.

Question 2.
Describe with the help of a diagram, how compressions and rarefactions are produced in air near a source of the sound.
Answer:
Air is the most common medium through which sound travels. When a vibrating object moves forward, it pushes and compresses the air in front of 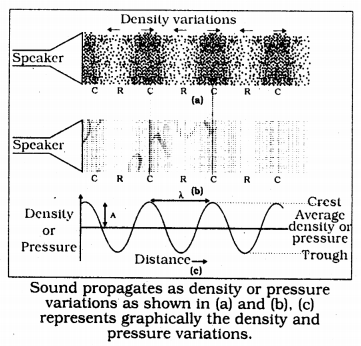 Question 3.
Cite an experiment to show that sound needs a material medium for its propagation.
Answer: 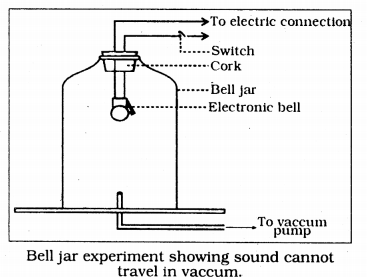 Experiment: Take an electric bell and an airtight glass bell jar. The electric bell is suspended inside the airtight bell jar. The bell jar is connected to a vacuum pump as shown in figure. If we press the switch we will be able to hear the bell. Now start the vacuum pump. When the air in the jar is pumped out gradually, the sound becomes painter, although the same current is passing through the bell. After sometime when less air is left inside the bell jar we will near a feeble sound. If the air is removed completely we can’t hear the bell. From this experiment, we conclude that sound needs a material medium for its propagation.

Question 4.
Why is a sound wave called a longitudinal wave?
Answer:
Sound waves are called longitudinal waves because the particles do not move from one place to another but they simply oscillate back and forth about their position of rest.

Question 6.
Plash and thunder are produced simultaneously. But thunder is heard a few seconds after the flash is seen. Why?
Answer:
Thunder is heard a few seconds later after the flash because the speed of light in the atmosphere for air is 3 × 108 ms-2 which is very high, as compared to the speed of sound which is only 330 ms-1. So the sound of thunder reaches us later than the flash.

Question 7.
A person has a hearing range from 20Hz to 20KHz. What are the typical wavelengths of sound waves in air corresponding to these two frequencies? Take the speed of sound in air as 344 ms-2).
Answer:
The relation between speed (v), wavelength (X) and frequency (v) of a wave, we have 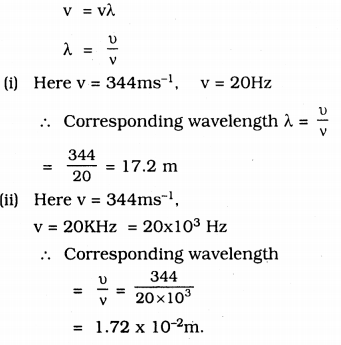 Question 11.
When a sound is reflected from a distant object, an echo is produced, Let the distance between the reflecting surface and the source of sound production remains the same. Do you hear echo sound on a hotter day?
Answer:
The time taken by echo to be heard
t = \(\frac{2 \mathrm{d}}{v}\)
where d = distance between the reflecting surface and source of the sound and v = speed of sound in air. As we know the speed of sound increases with an increase in temperature. So on a hotter day speed of sound will be higher, so the time after which echo is heard will decrease. If the time taken by the reflected sound is less than 0.15 after the production of the original sound, then echo is not heard.

Question 15.
What is reverberation? How can it be reduced?
Answer:
The phenomenon of propagation of original sound due to the multiple reflections of sound waves even after the source of sound and stops producing sound is called reverberation. It can be reduced by covering the roofs and walls of the hall by absorbing materials.

Question 16.
What is loudness of sound? What factors does it depend on?
Answer:
Loudness of a sound is a subjective quantity. It causes an unpleasant effect on air. Loudness depends on

Question 17.
Explain how bats use ultrasound to catch a prey.
Answer:
Bats emit ultrasonic waves and search their food. Ultrasonic waves having higher pitch reflects from prey and reaches ears of the Bat. Nature of reflection indicates to Bat regarding position and type of prey.

Question 18.
How is ultrasound used for cleaning?
Answer:
Objects to be cleaned are placed in a cleaning solution and ultrasonic waves are sent into the solution. Due to high frequency, the particles of dust, grease, and dirt get detached and drop out. The objects thus get thoroughly cleaned.

Question 19.
Explain the working and application of a sonar.
Answer:
Working: Sonar consists of a transmitter and a detector and is installed in a boat or a ship as shown in Fig. The transmitter produces and transmits ultrasonic waves. These waves travel through water and after striking the object on the seabed, get reflected back and are sensed by the detector.

The detector converts the ultrasonic waves into electrical signals which are appropriately interpreted. The distance of the object that reflected the soundwave can be calculated by knowing the speed of sound in water and the time interval between the transmission and reception of the ultrasound. Let the time interval between transmission and reception of ultrasound signal be t and the speed of sound through seawater be v. The total distance, 2d travelled by the ultrasound is then, 2d = vxt. 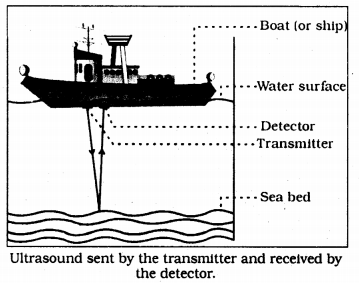 Applications: The sonar technique is used to determine the depth of the sea and to locate underwater hills, valleys, submarine, icebergs, sunken ship etc.

Question 21.
Explain how defects in a metal block can be detected using ultrasound.
Answer: 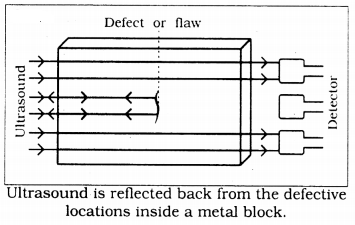 The cracks or holes inside the metal blocks, which are invisible from outside reduces the strength of the structure Ultrasonic waves are allowed to pass through the metal block and detectors are used to detect the transmitted waves. If there is even a small defect, the ultrasound gets reflected back indicating the presence of the flaw or defect.

Similarly, the eardrum moves outward when a rarefaction reaches it. In this way, the eardrum vibrates. The vibrations are amplified several times by three bones (the hammer, anvil, and stirrup) in the middle ear. The middle ear transmits the amplified pressure variations received from the sound wave to the inner ear. In the inner ear, the pressure variations are turned into electrical signals by the cochlea. These electrical signals are sent to the brain via the auditory nerve and the brain interprets them as sound. 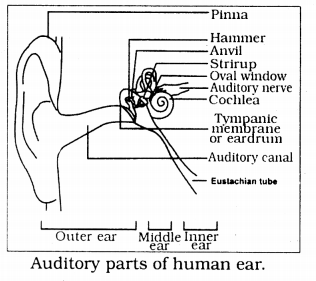 Answer the following questions:
Question 1.
What is a wave?
Answer:
A wave is a disturbance that moves through a medium -when the particles of the medium set neighbouring particles into motion.

Question 4.
What do you mean by tone?
Answer:
A sound of a single frequency is called a tone.