Karnataka Board Class 9 Science Chapter 4 Structure of The Atom

Question 1.
What are canal rays?
Answer:
Radiations in a gas discharge are called canal rays.

Question 2.
If an atom contains one electron and one proton, will it carry any charge or not?
Answer:
Atom do not cany any charge because atom is neutral.

Question 3.
Draw a sketch of Bohr’s model of an atom with three shells.
Answer: 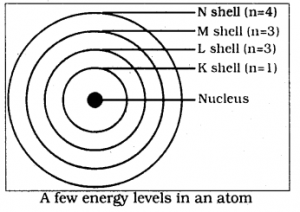 Question 2.
Helium atom has an atomic mass of 4u and two protons in its nucleus. How many nutrons does it have?
Answer:
It has 2 neutrons in it.

Question 1.
If number of electrons in an atom is 8 and number of protons is also 8, then

ii) Isobars : Let us consider two elements – calcium atomic number 20, and argon, atomic number 18. The number of electrons in these atoms is different, but the mass number of both these elements is 40. They differ in Electronic configuration.

Question 1.
Compare the properties of electrons, protons, and neutrons.
Answer:

Question 2.
What are the limitations of J.J. Thomson’s model of the atom?
Answer:
Although Thomson’s model explained that atoms are electrically neutral, the results of experiments carried out by other scientists could not be explained by this model.

Question 3.
What are the limitations of Rutherford’s model of the atom?
Answer:
The revolution of the electron in a circular orbit is not expected to be stable. Any particle in the circular orbit would undergo acceleration. During acceleration, charged particles would radiate energy. Thus, the revolving electron would lose energy and finally fall into the nucleus. If this were so, the atom should be highly unstable, and hence matter would not exist in the form that we know., we know that atoms are quite stable.

Question 4.
Describe Bohr’s model of the atom.
Answer:
Neils Bohr put forward the following postulates about the model of an atom.

Question 5.
Compare all the proposed models of an atom given in this chapter.
Answer:
i) Thomson proposed that An atom consists of a positively charged sphere and the electrons are embedded in it.
ii) Rutherford put forward the nuclear model of an atom, which had the following features:
(a) There is a positively charged centre in an atom called the nucleus. Nearly all the mass of an atom resides in the nucleus.
(b) The electrons revolve around the nucleus in circular paths.
(c) The size of the nucleus is very small as compared to the size of the atom.
iii) Neils Bohr put forward the following postulates about the model of an atom.
a) Only certain special orbits known as discrete orbits of electrons are allowed inside the atom.
b) While revolving in discrete orbits the electrons do not radiate energy.
iv) In 1932, J. Chadwick discovered another sub-atomic particle which had no charge and a mass nearly equal to that of a proton. It was eventually named as a neutron. Neutrons Eire present in the nucleus of all atoms, except hydrogen. Atom has 3 subatomic particles called
(a) Protons
(b) Neutrons
(c) Electrons

Question 7.
Define valency by taking examples of silicon and oxygen.
Answer:
i) The electronic configuration of silicon is as follows:

Silicon has four electrons in the outermost orbit. So its valency is 4.
ii) Electronic configuration of oxygen is as follows:

Oxygen has 6 electrons in the outermost orbit, but it looses 4 electrons. Hence its valency is 2.

Question 8.
Explain with examples:
(i) Atomic number
(ii) Mass Number,
(iii) Isotopes and
(iv) Isobars. Give any two uses of isotopes.
Answer:
(i) Atomic Number: It is the number of protons of an atom. This is denoted by ‘Z’. For example, Hydrogen has 1 proton and its atomic number is 1.
(ii) Mass Number: Protons and neutrons are present in the nucleus of an atom. These are also called nucleons. Therefore the sum of protons and neutrons in the nucleus is called Mass Number. For example, the mass of carbon is 12u because it has 6 protons and 6 neutrons, 6u + 6u = 12u.
(iii) Isotopes: Atoms of the same element having the same atomic number but different mass numbers are called isotopes.
Eg: There are three isotopes of hydrogen atom namely protium, deuterium, and tritium.
(iv) Isobars: Atoms of different elements with different atomic numbers, which have the same mass number are known as isobars.
Eg: Atomic number of calcium is 20, and Argon, has atomic number 18. The number of electrons in these atoms is different, but the mass number of both these elements is 40. That is the total number of nucleons is the same in the atoms of this pair of elements.
Uses of isotopes are

Question 12.
If Z = 3, what would be the valency of the element? Also name the element.
Answer:
Z = 3 means its valency is 1. That element is Lithium.

Question 13.
Composition of the nuclei of two atomic species X and Y are given as under.

Question 14.
For the following statements, write T for True and F for False.
a) J.J. Thomson proposed that the nucleus of an atom contains only nucleons.
b) A neutron is formed by an electron and a proton combining together. Therefore it is neutral.
c) The mass of an electron is about 1 /2000 times that of proton.
d) An isotope of Iodine is used for making tincture iodine, which is used as a medicine.
Answers:
a) True.
b) True.
c) False
d) True. 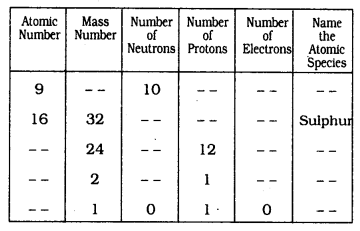 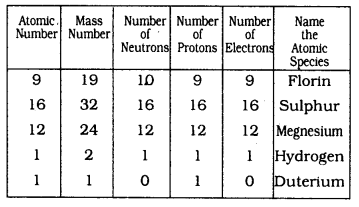 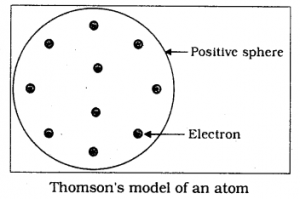 Question 2.
Draw a neat diagram of energy levels in a atom and lable the parts.
Answer: 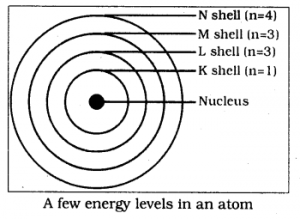 Question 4.
What is valancy?
Answer:
The combining capacity of an element is called the valency.