Task 1:
Imagine you are walking home Irani school. You see a small hoy sitting on a branch of a tree. There is a crack in the branch and the boy is about to fall. What would you do? Discuss with your partner.

I would shout and ask other people to join me in saving the child. I will remove my uniform shirt and with the help of other people, spread it out like a net under the cracked branch. F.ven if the boy falls, he will be protected by Hilling onto my spread shirt. Thus he will be rescued.

Task 2: Think of some stories that you have heard about accidents that have been prevented because of the brave acts of children. Tell your partner and share with the class.

Siddcsh, a 9 year – old, class 4 student of the Government Higher Primary school in Avaragere village, on the outskirts of Davanagere city, averted a railway accident, not only alerted his father Manjunath about a crack in the track but also flagged down the approaching train with his red T-Shirt. He stood on the railway track waving his red R- shirt until the train driver noticed him and stopped the train. This brave act of Siddcsh saved hundreds of passengers traveling on the train.

Every year the Indian Council for Child Welfare (ICCW) awards children who have performed outstanding deeds of bravery; about 25 children below the age of 16 are given this award annually. The national awards for bravery began in 1957. The first award was given to a child who saved the life of the first Prime Minister of India – Jawaharlal Nehru.

V1. Fill in the blanks with the words given in the box.

It was unfortunate that Abhi and his friends met with an accident on the way to Nandi Hills. His friend Nit in showed determination in saving them, when he pulled Abhi and two others out of the car. Nitin received an award for bravery. He is always desire to help his friends.

V3 Fill in the blanks with suitable adjectives choosing the correct word from the brackets.

Question 1.
When was the first Bravery Award for children given in India?
Answer:
On 2nd October 1957, a fire broke out in a Shamiana through a short circuit at Delhi’s Ramlila grounds at the Red fort. India’s first Prime Minister, Jawaharlal Nehru was present there watching the program. Harish Chandra, a scout boy quickly cut open the Shamiana with a knife and saved the fives of hundreds of trapped people. The first Bravery Award for children was given to Harish Chandra on the eye of Republic Day 1958. This tradition was started by Pandit Nehru and continues till date.

Question 2.
Why are the Bravery Awards given?
Answer:
The Bravery Awards are given to inspire the children to act bravely at times of danger and save life and property of people around them.

Question 4.
What do the awardees receive?
Answer:
The awardees receive a Medal, a certificate and cash as a token of appreciation of their valour. Some of them are granted financial assistance to complete their higher education

C2 Discuss the stories of bravery that you have read. Decide which act impressed you the most and write it down as a note.

Use these sentence beginnings:

A 10 year old child will not know what is a grenade. Instead of going and hiding she with all courage and presence of mind has disposed it with bare hands to save her mother’s shop at Imphal. So I think, this is an act of bravery.

10. Kumari Maibam Prity Devi of Manipur, aged 10, saved several lives. She used her bare hands to dispose of a live grenade that was hurled at her mother’s shop in Imphal. Her aim is to fight terror by joining the police force.

L2.Underline the nouns in the following paragraph:

Indian music is very expressive. It is traditionally taught through oral methods. The system of Indian music is based on two important pillars-rag and tal. Rag is the melodic form while tal is the rhythmic form. The interpretation of the rag and the tal is not the same all over India. Today, there are two major traditions of classical music. There is the north Indian Hindustani sangeet. The other is the south Indian Carnatic music. Both systems are fundamentally similar but differ in performance. 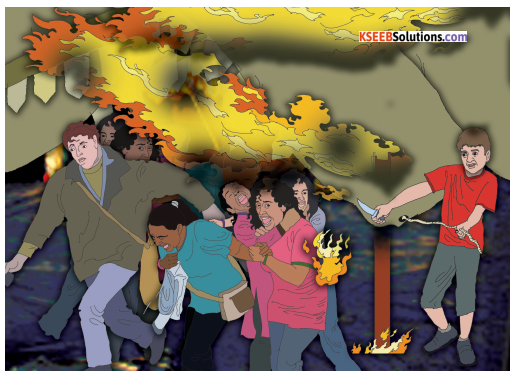 The given lesson ‘Children of courage – Bravery Awards’ is an essay about the bravery of children and how the Government of India recognizes their brave deeds by giving them Awards.

The tradition of giving out bravery awards for children was started in 1958 by our first Prime- Minister Pt. Jawaharlal Nehru. On 2nd Oct 1957, Pt. Nehru was watching a performance at Delhi’s Ramlila grounds when a fire broke out in the shamiana due to a short circuit. A 14 year old boy, Harishchandra showed his presence of mind and quickly cut the burning Shamina with his knife. This act saved hundreds of life. Inspired by this act of bravery, Pt. Nehru was inspired to initiate bravery awards. Harishchandra was the first recipient of the bravery award. 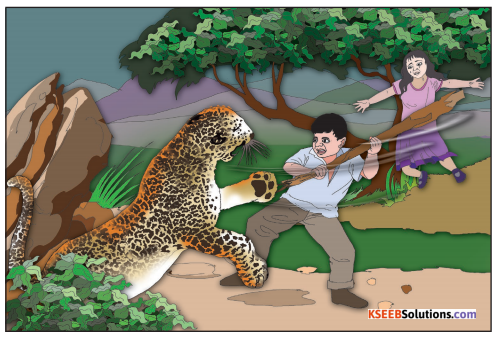 The bravery awards are announced on Children’s day (14th Nov – the birthday of Chacha Nehru)., every year. The Prime Minister of India presents these awards to the recipients on Republic day every year. The awardees receive a medal, certificate and cash in recognition of their brave deeds. 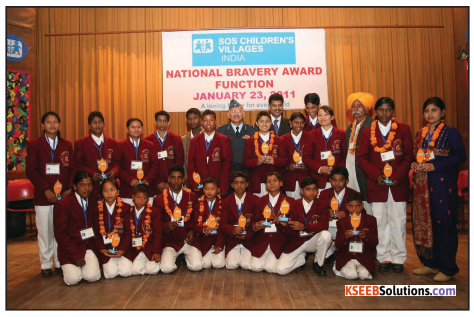 In 2009, 21 children were honored. Among them, was a 13-year-old boy, Gaurav Singh Saini of Haryana. He had saved 50-60 people in a stampede at the Naina Devi temple in Himachal Pradesh. Kumari Maiban Prity Devi of Manipur (10 years old) had used her bare hands to dispose of a live grenade (a small bomb thrown by hand). It was hurled by militants at her mother shop. This act saved several fives. She aspires to join the police force.

Ten-year-old Priyanshu Joshi of Uttarakhand was honored in 2010, for fighting off a leopard that had attacked his sister, on their way to school. Eleven year old Ginjeevan Singh from Punjab was honored for preventing a bank robbery. He had attacked the thieves with bricks. When they open fire, he escaped. The other people who were present their managed to catch the thieves. Moonis Khan (15) from Madhya Pradesh was -honored for saving an old man from a railway accident. 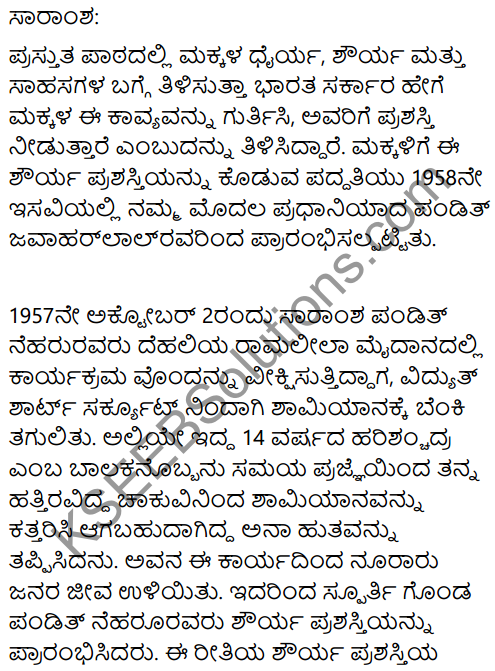 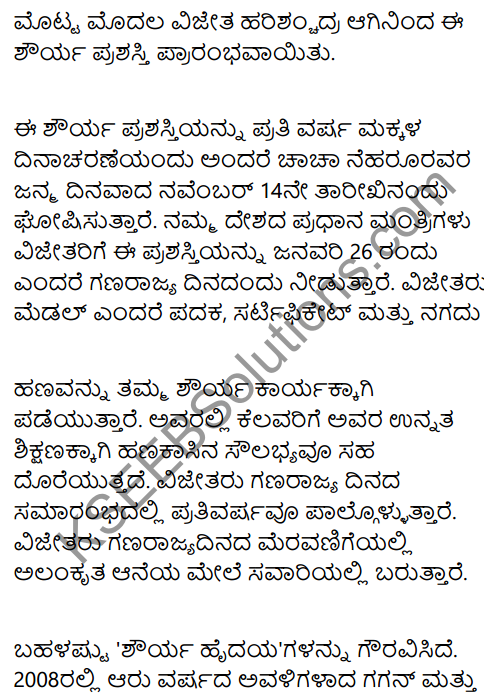 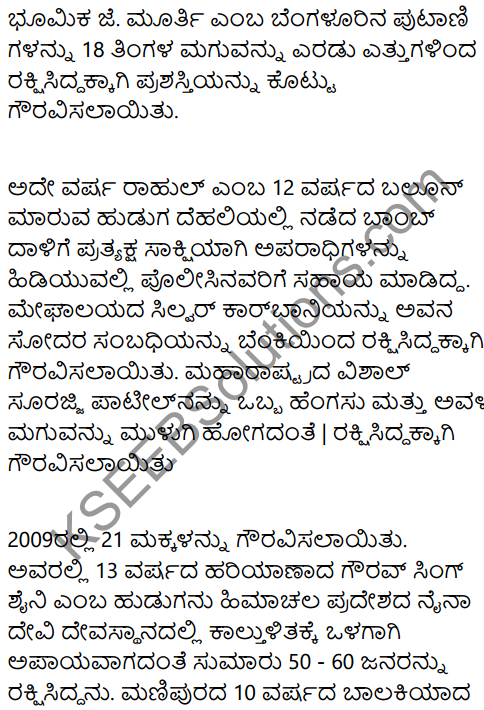 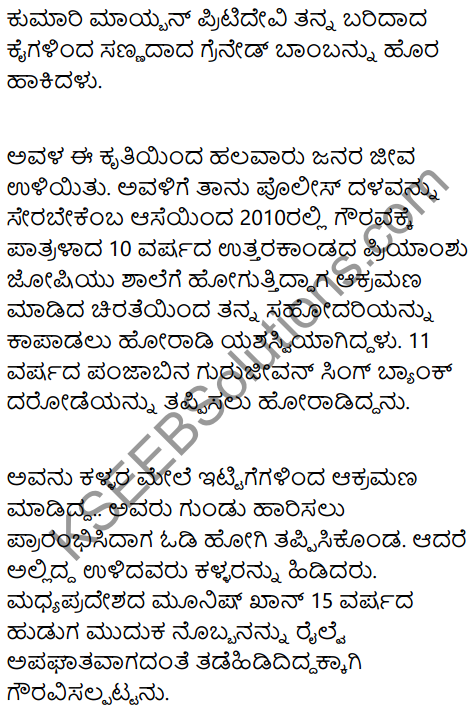 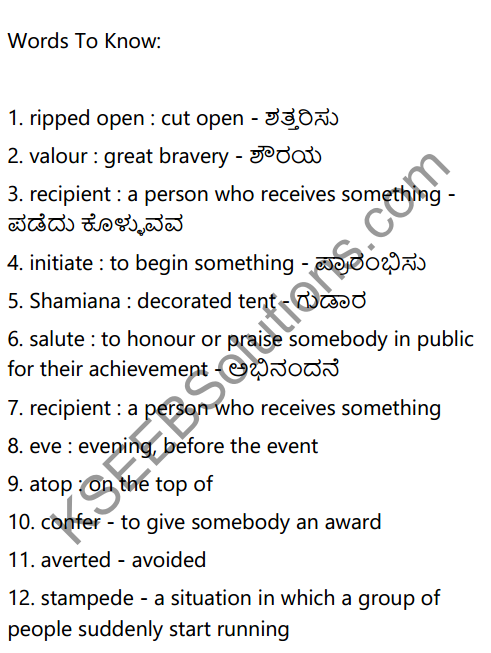