Students can Download EVS Chapter 14 The Sky Questions and Answers, Summary, Notes Pdf, KSEEB Solutions for Class 5 EVS helps you to revise the complete Karnataka State Board Syllabus and score more marks in your examinations. 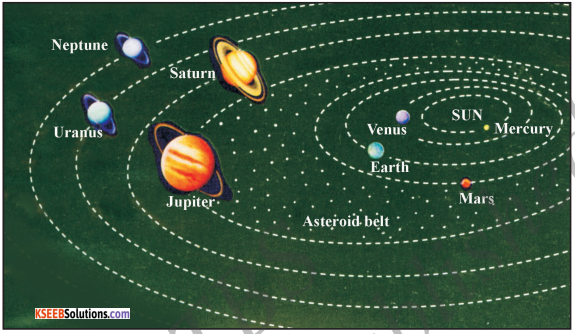 Question 1.
Answer the following questions with the help of the above picture:
Answer:

Question 2.
Which planet takes the least to complete one revolution around the sun? why?
Answer:
Mercury has the shortest orbital period of any planet in the solar system, completing a trip around the sun every 88 days. It is the smallest of the eight planets, as well as the closest to the sun.

Question 3.
Which planet takes those times to complete one revolution around the sun? why?
Answer:
The amount of time it takes one planet to make a frill orbit around the sun is considered a year, Here on Earth. One year equals 365.24 days. Planets closer to the sun complete their orbits fester than planets farther away Neptune is farther out than Mars, so it takes longer to orbit.

Question 5.
Which is the natural satellite of the earth?
Answer:
Moon.

Question 6.
Explain the characteristics of the following celestial bodies.
Answer:

Question 7.
What is mean solar day?
Answer:
In general, the period from one sun rise to another is consider a day. This is called mean solar day.

Question 8.
Sidereal day explain?
Answer:
The earth takes actual take to complete one rotation in 23 hrs, 56 minutes and 4.09 seconds. This period is known as sidereal day.

The Sky Additional Questions and Answers

Question 3.
The twin planet of the earth is
a) Mars
b) Uranus
c) Neptune
d) Venus
Answer:
d) Venus

Question 4.
The astronomer, who was the first to look at the moon through the telescope in 1608 was
a) Neil Armstrong
b) Galileo
c) Eratosthenes
d) Vasco dagama
Answer:
b) Galileo

Question 6.
The planet which has only life is
a) Earth
b) Venus
c) Jupiter
d) Mars
Answer:
a) Earth

Question 8.
The sun is a
a) Satellite
b) Asteroids
c) Star
d) comets
Answer:
c) Star

II. Fill in the blanks:

Question 2.
What is solar system?
Answer:
The family of the sun is known as the solar system.

Question 3.
How are planets different from stars?
Answer:
A planet is a celestial body, moving in an elliptical orbit, around a paticular star.

Question 4.
Why is the Earth known as unique planet?
Answer:
The Earth is the only planet of our solar system, on which there is life.

Question 5.
What is meant by the phases of the moon?
Answer:
The moon has no light of its own, hence it reflects the light from the sun, its position in relation to the sun changes from night tonight. As a result, we have the phase of the moon.

Question 6.
What is lunar month?
Answer:
The period from one new moon to the next new moon is called Lunar month.

Question 7.
What is a planet?
Answer:
A planet is a celestial body, moving in an elliptical orbit, around a particular star.

Question 8.
What is meant by waxing? In the course of the moon’s revolution
Answer:
From the day following the new moon to that of the lull moon the lit up portion of the moon gradually increases. This change is known as waxing.

Question 9.
What is the axis?
Answer:
The imaginary line that passes through the center of the earth, from the north pole to the south pole, is the axis.

Question 10.
What is lunar eclipse?
Answer:
When the moon is partly or fully covered by the shadow of the Earth. This is known as lunar eclipse.

Question 11.
What are the two types of eclipses?
Answer:

Question 12.
What is new moon?
Answer:
When the moon is completely dark we call it new moon.

Question 13.
What is full moon?
Answer:
When we see moon’s bright side totally, we call it hill moon.

Question 15.
What is moonlight?
Answer:
At night the moon reflects the light received from the sun. This is known as moonlight.

Question 17.
What is geoid?
Answer:
Earth was slightly flattened at the poles and bulging at the equator. Such a shape is called ‘geoid’.

Question 18.
Why is milky way?
Answer:
Our solar system is a part of a galaxy known as them milky way.

Question 21.
Name the planets which do not have satellites?
Answer:
Mercury and Venus have no satellites.

Question 24.
What are Asteroids?
Answer:
Between the orbits of Mars and Jupiter, numerous small bodies also revolve around the sun. There are called asteroids.

Question 25.
What is rotation?
Answer:
The Earth spins continuously on its axis from west to east is called revolution.

Question 26.
What is revolution?
Answer:
The earth also revolves around the sun along its orbit. This is called a revolution.

Question 27.
What is the Earth’s axis?
Answer:
The earth rotates on its axis, it spins itself is called the Earths axis.

Question 28.
What is meant by equator?
Answer:
An imaginary line is drawn around the Earth is called the equator.

Question 30.
What are lines of latitude?
Answer:
Latitudes are a set of imaginary lines drawn on the globe from West to East.

Question 32.
What is local time?
Answer:
When the sun is overhead at any meridian.lt is noon at al the places over throughout meridian. It is known as local time.

Question 33.
What is meant by the Earth’s orbit?
Answer:
The earth has its own path of movement known as the orbit.