1. a) Write the names of the professions:

b) Do you know any other professions? Write them down and discuss the nature of work.

C1. Answer the following in two or three sentences:

Question 3.
Why do people sigh?
Answer:
After a day-long work, if they return home empty-handed, the people sigh

Question 4.
Who does the poet refer to as God-loving men?
Answer:
Men who pose themselves as Godmen. They preach that all men are equal, but never; try to uplift the poet’s people.

C2. Discuss in small groups and answer the following:

Question 2.
What, as mentioned in the poem, are the different activities done by them?
Answer:
Carrying stones for buildings, excavating gold. Plowing the field, sowing the seeds, cutting the crops, build shops and raise bungalows, make footwear.

Question 3.
Why does the poet have sympathy for his people?
What, as mentioned in the poem, are the different activities done by them?
Answer:
His people are all hard workers and thy work for the benefit of society. But they suffer from poverty, so he sympathizes with them.

Question 4.
Isn’t it a pity that some people build the shops but get into heavy debts? How does this happen?
Answer:
Even though the poet’s people toil day and night, they are paid a pittance. Many of them can’t offer even a square meal a day because of their meager earnings. They are forced to borrow money from their employer’s for huge interest rates. The employers deduct the loans from their payment and the poet’s people go home empty-handed or borrow again.

Question 5.
What do you think should be done to solve their miseries?
Answer:
The government should take the responsibility of maintaining the equal status of people in the country. The daily wage workers must be well paid and enjoy all the benefits from the government like the government employees.

My People Summary in English

Dr. Siddalingaiah is a professor of Kannada in Bangalore university. He is a major Kannada poet. He pioneered the Dalit voice in 1975. The trendsetting work on Dalit literature in Kannada is ‘Holemaadiagana Haadu’ (1975) a collection of poems by Siddalingaiah. His autobiography. ‘Ooru Keri’ is translated into English. Many of his poems are translated into various Indian and other languages.

Dr. Sumathedra Nadig is a prominent modern poet. His ‘Dampatya Gita’ has been translated into English, Hindi, Bengali, and other Indian languages.

In the poet ‘My People’ Dr. Siddalingaiah, the poet highlights the miseries of his people the ‘Dalits’. Dalits have been socially marginalized by others in Indian society. In the days gone by Dalits never had an opportunity to get educated and this led to their oppression.

They were forced to work as landless laborers, paid meagerly, and led a life of poverty. They have suffered unknown miseries. In the poem, the poet says that his people carry stones for buildings.

They are forced to do hard labour. If they are not quick enough to do the work assigned to them they are kicked until they faint. Even though they toil day and night, they are paid a pittance. Many of them can’t afford two square meals a day and so die of hunger or malnutrition.

The poet’s people, go deep into the gold mines, risking their lives and limbs to excavate gold, even though they help to produce the most valuable metal on earth, they don’t get a meal a day, because they are paid a meager wage from their toil.

They sow the seeds and harvest the crops by toiling in the hot sun. They get baked (burnt) in the sun – many of these people are enslaved into bonded labour because they have borrowed money from the landlords.

All the money they earn by labouring at the Landlords fields is deducted for the loans they have to repay, so they go home empty-handed. They have a deep sigh in sorrow and live a life of misery and poverty.

These people build shops and raise buildings. They are ensnared in a web of heavy debts. In spite of poverty and starvation, they do not cry out for help when they are in a difficult situation. They suppress their cries for help because they know that no one will help them, no one will come to their aid and relieve them of their misery.

They pay heavy interest for the loans they borrow (they pay interest through their noses). The politicians use them as their vote banks. They make fiery speeches about their upliftment and get elected. These people lured by their enticing promises elect them, only to be let down by the politicians – ‘They become ash in the fire of fiery speeches.

Men often project themselves as God-loving people but these men (Guru’s and math – heads) live a life of luxury. The poet’s people make footwear for these Godmen.

If the poet’s people fall at other’s feet i.e, if they plead for help they are kicked. But they are ignorant of the ways of the other men who assure them of their upliftment. They devote themselves to these men and listen to anything said to them.

But they never get any help, they are left to fend for themselves. They live on air. They live a life of poverty and misery, these people, the poet’s people.

My People Summary in Kannada 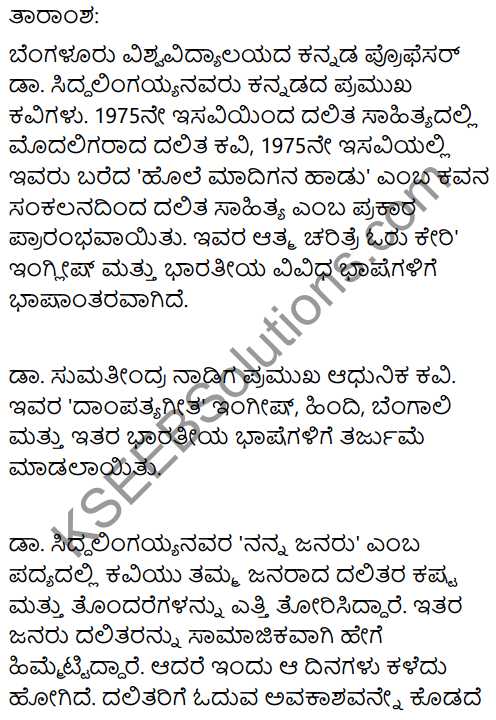 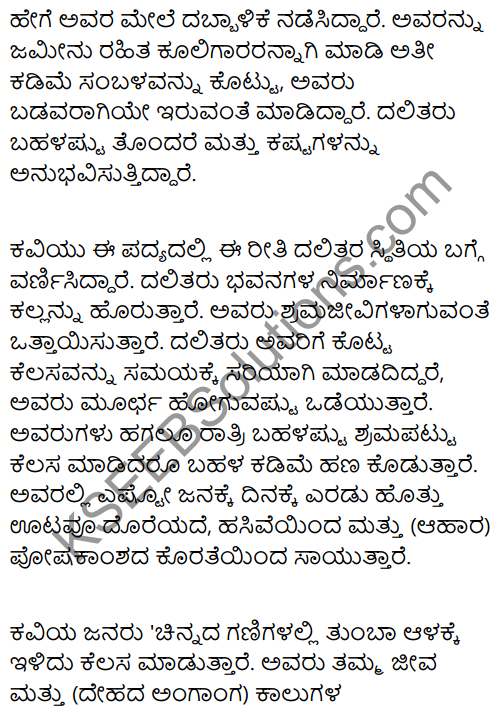 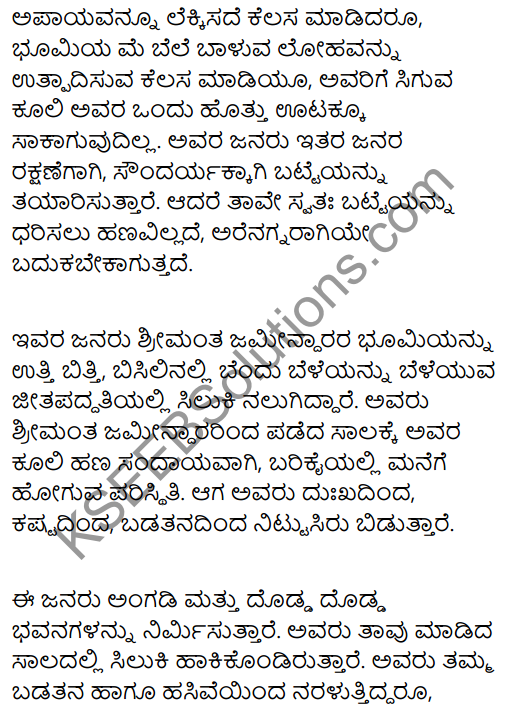 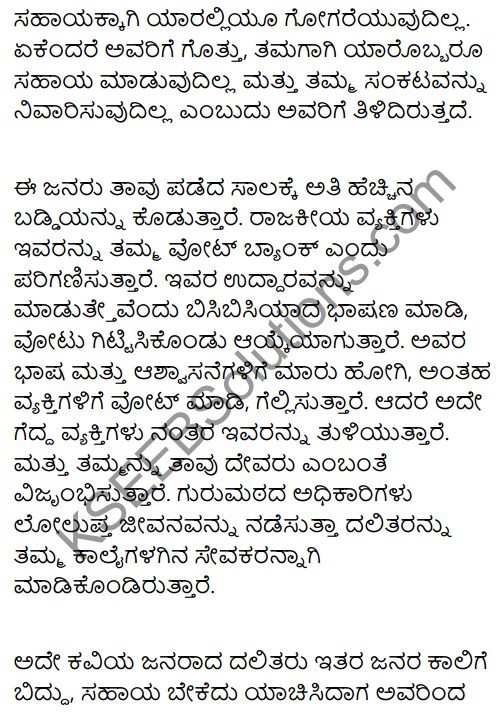 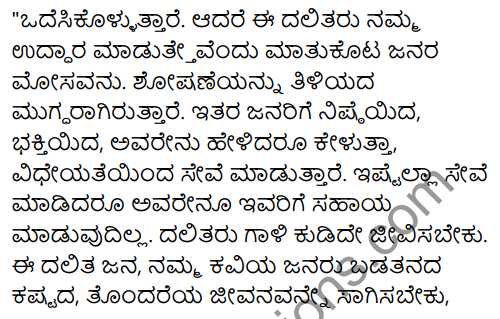 site: an area that is used for building
swoon: faint
excavate: dig up
weave: make clothing, on a machine
plough: a large tool used by farmers to turn over the soil before planting crops.
sigh: make a noise when you breathe out, often when you are sad.
misery: sadness and suffering
debt: an amount of money that you owe someone
collapse: fall down
suppress: hold back
restrain ash: the soft, grey powder which remains when something is burnt.
devote: use time or energy for a particular purpose

Hope the information shared regarding KSEEB Solutions for Class 6 English Chapter 7 My People Questions and Answers is true and genuine as far as our knowledge is concerned. If you feel any information is missing do react us and we will look into it and add it accordingly.