Question 1.
What did the Hakim suggest to the Emperor?
Answer:
Hakim suggested to the emperor that if he heard a story before going to bed, his mind would relax and he can go to sleep peacefully.

Question 2.
Why did the durbaris go to Birbal?
Answer:
Though the Durbaris told the story, the emperor could not get the sleep, instead of that the emperor asked “what’s next?” They had to continue to tell the story till morning. It was really a problem for them So they all decided to go to Birbal seeking solution.

Question 3.
What was Bhil’s problem?
Answer:
Bhil was capable of protecting himself from the beasts but not his grains of com. There were many kinds of birds in that jungle and they all carried away his corns. This was a big problem for Bhil.

Question 4.
How did Bhil try to solve the problem?
Answer:
Bhil was thinking over the problem, how to get rid of these birds. Finally he thought a plan. He went to market and bought a big basket and kept the grains and closed its lid tightly. The birds were-unable to peck the basked. Bhil solved the problem.

Question 5.
What did the little sparrow do?
Answer:
The little sparrow was very clever, it made friendship with a small mouse in the hut and that mouse nibbled at the basket. It was very much beneficial to birds and birds carried away the grains as usual.

Question 6.
Why was the Emperor disgusted?
Answer:
The Emperor was disgusted about the way Birbal told the story. The birds were carrying the grains one by one. For each bird he said the same. So he was bored.

Akbar and Birbal stories are very familiar and popular. These stories are very interesting. Here the title of the story is very catchy. In this story once Emperor Akbar felt ill. Though it was not serious, the emperor could not sleep. For that hakim suggested that the emperor should hear a story, before retiring to bed. Each one of the courtiers would tell a story to the emperor.

But the emperor would not sleep and the courtiers should continue the story. It was really a problem for ministers and courtiers, so they consulted Birbal. Birbal agreed to tell a story to the emperor. Birbal narrated a story, then the emperor asked what happened then. As the stories continued the emperor asked the usual question ‘What’s next?’ But clever Birbal made a plan and started the Story.

In that story, 500 birds were there. He told one bird went into the hut and holding a grain flew out. After the second, third, fourth bird the story goes on like that when the emperor asked how many are birds left, Birbal told only five birds have flown out. The remaining four hundred and ninety-five birds to go! Birbal continued like this, the emperor got bored. Them emperor asked Birbal when are these birds going to finish their task. For that Birbal replied when you stop saying what’s next? Sarkar. The emperor realished his foolishness and stopped this programme. 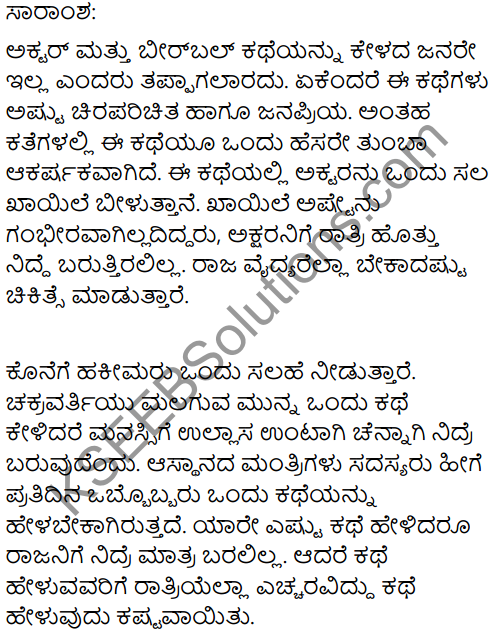 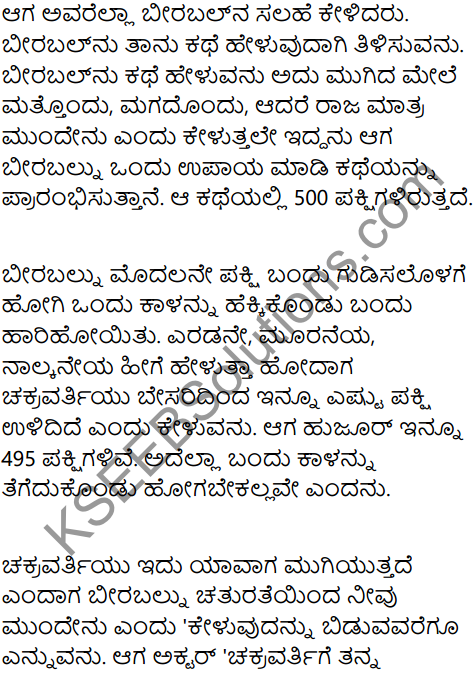 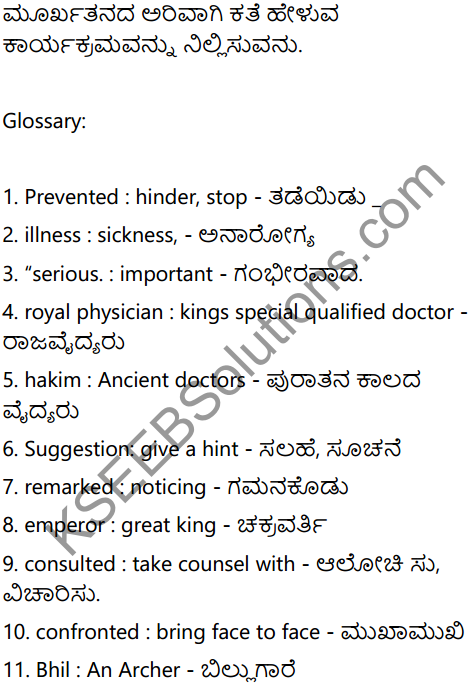 The above furnished information regarding KSEEB Solutions for Class 7 English Chapter 1 The Never Ending Story Questions and Answers is true as far as our knowledge is concerned. If you have any doubts feel free to reach us via the comment section and we will reach you at the soonest possible.