(a) Digestion of starch starts in the stomach. (T/F)
Answer:
False

(b) The tongue helps in mixing food with saliva. (T/F)
Answer:
True

(d) The ruminants bring back swallowed grass into their mouth and chew it for some time. (T/F)
Answer:
True

Question 4.
Match the items of Column I with those given in Column II:

Question 5.
What are villi? What are their location and function?
Answer:
The inner wall of the small intestine has thousands of finger-like outgrowths. These are called villi.
villi are located in the small intestine. The villi increase the surface area for absorption of the digested food. Each villus has a network of thin and small blood vessels close to its surface. The surface of the villi absorbs the digested food materials.

Question 6.
Where is the bile produced? Which component of the food does it digest?
Answer:
The liver secretes the bile juice which is stored in the gall bladder, bile plays an important role in the digestion of fats. It breaks down the larger fat globules to smaller fat globules (emulsification) and thus helps in enzymatic action on the fats.

Question 8.
Why do we get instant energy from glucose?
Answer:
Glucose is a simple sugar. Carbohydrates, when consumed, get digested into glucose. As glucose can be easily absorbed in the blood, it provides instant energy to the body. Hence, when glucose is taken directly, it does not have to be digested and thus acts as an instant source of energy.

Question 10.
Write one similarity and one difference between nutrition in amoeba and human beings.
Answer:
Similarity:
The basic process of digestion of food and release of energy is the same in amoeba as well as in human beings in amoeba, Digestive juices are secreted into the food vacuole. They act on the food and break it down into simpler substances. Gradually the digested food is absorbed. Similarly, in human beings various digestive juices (mouth, stomach, intestine, etc.) act on food and break it down to simpler substances.

Difference :
The digestion process in amoeba is simple while in human beings it is a complex process. The process of ingestion and egestion is quite different. Amoeba engulfs its food by surrounding the food particle with its pseudopodia. The undigested food which is largely carbon dioxide gas is expelled outside by the vacuole. While in human beings, the food (which is a complex substance) is taken inside the mouth and undergoes a complex process of digestion and absorption. Finally, the undigested food is expelled in the form of faeces.

Question 11.
Match the items of Column 1 with suitable items in Column II 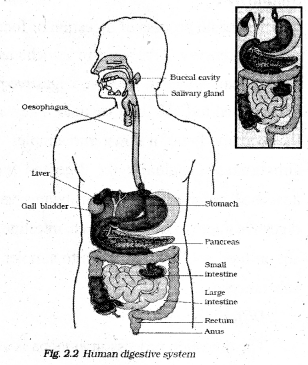 Question 4.
How starfish will take food?
Answer:
It is one of the amazing facts. The starfish feeds on animals covered by hard shells of calcium carbonate. After opening the shell the starfish pops out its stomach through its mouth to eat the soft animal inside the shell. The stomach then goes back into the body and the food is slowly digested. 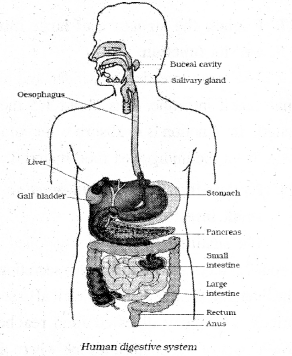 Question 6.
Name the different types of teeth in Man?
Answer:
The shapes and functions of our teeth are different. According to their function, the teeth are classified into three types.

Question 8.
What is tooth – decay?
Answer:
The acids produced in our mouth due to leftover food or sweets. These acids gradually damage the teeth called Tooth decay.

Question 9.
What are ruminants?
Answer:
The cows, buffaloes, and other grass-eating animals chewing continuously are called ruminants. They quickly swallow the grass and store it in a part of the stomach called the rumen. Here the food gets partially digested and it is called cud. Later the cud returns to the mouth in small lumps and the animal chews it. This process is called chewing the cud or rumination and these animals are called ruminants. The grass is rich in cellulose.

Question 10.
What is assimilation?
Answer:
The absorbed food substances are transported through the blood vessels to different organs of the body where they are used to build complex substances such as proteins required by the body is called assimilation.

Question 11.
What is egestion?
Answer:
The remaining waste passes into the rectum and remains there as semi-solid faeces. The faecal matter is removed through the anus from time – to – the time is called egestion.

Question 12.
Explain the digestion in the stomach.
Answer:
The stomach is a thick-walled bag. Its shape is like a flattened ‘J’ and it is the widest part of the alimentary canal. It receives food from the food pipe at one end and opens into the small intestine at the other end. The inner lining of the stomach secretes mucous, hydrochloric and digestive Juices. The mucous protects the lining of the stomach. The acid kills many bacteria that enter along with the food and makes the acidic medium in the stomach which helps the digestive juices to act. Here the digestive Juices break down the proteins into simpler substances.

Question 13.
Write the neat diagram of Amoeba and label the parts.
Answer: 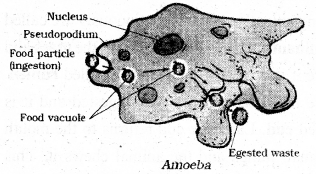 Question 14.
Explain the feeding and digestion in Amoeba.
Answer:
Amoeba feeds on some microscopic organisms. When it senses food, it pushes out pseudopodia around the food particle and engulfs it. The food becomes trapped in a food vacuole. Digestive juices are secreted into the food vacuole. They act on the food and break it down into simpler substances, gradually the digested food is absorbed. 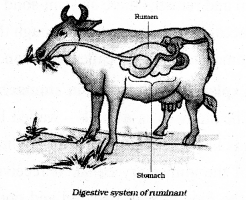 Question 16.
Write the neat diagram of movement of the food in the oesophagus of the alimentary canal, label the parts and explain.
Answer: 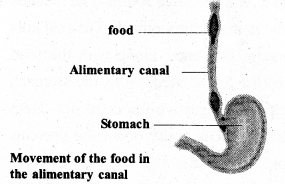 The swallowed food passes into the food pipe or oesophagus. The food pipe runs along the neck and the chest. Food is pushed down by the movement of the wall of the food pipe. Actually this movement takes place throughout the alimentary canal and pushes the food downwards. When the food is not accepted by our stomach, it is vomited out.

Question 17.
Explain the structure of large intestine and its function.
Answer:
The large intestine is winder and shorter than small intestine. It is about 1.5 metre in length. Its function is to absorb water and some salts from the undigested food material.

Question 18.
Explain the structure and function of the small intestine.
Answer:
The small intestine is highly coiled and is about 7.5 metres long. It receives the secretion from the liver and the pancreas. Its wall also secretes juices. The party digested food reaches the lower part of the small intestine where the intestinal juice completes the digestion of all components of the food. The carbohydrates get broken down into simple sugars such as gluscose, fats into fatty acids and glycerol and proteins into amino acids.

Question 19.
What is diarrhea?
Answer:
Sometimes we have all experienced the need to pass watery stool frequently. This condition is known as diarrhea.

Question 20.
What is ORS?
Answer:
ORS is an Oral Rehydration Solution. The boiled and cooled water with a pinch of salt and sugar dissolved in it. ORS solution should be given to diarrhea. Patients to prevent dehydration before consulting the doctor.

II. Fill in the blanks