With the help of the Karnataka Secondary Education Examination Board Class 8 English Solutions Chapter 14 Imagination Questions and Answers Pdf, Notes, Summary you can get an idea about the subject. Also we suggest the students keep the textbook aside to learn the subject in depth.

I. Answer the following in two or three sentences each:

Question 1.
What do you think were the ‘simple things’ done by the cowboy?
Answer:
The poet recalls how he used to enjoy playing the game of pirates and behaving like a cowboy. He would think that he was sailing upon the seven seas as a pirate, and sitting upon a horse herding the cattle in a ranch.

Question 2.
Do you enjoy reading? What do you feel are the joys of reading?
Answer:
Yes, I do. Reading helps us learn about many things. It deepens and widens our knowledge. It makes us more human and broad-minded. Reading also helps us in our daily life by equipping us better to cope with life.

Question 3.
Where do the Eskimos live?
Answer:
The Eskimos live in the Arctic region of the world. They mostly live in wood, cement and stone buildings presently unlike in the past where they lived in igloos which were ice caves.

Question 5.
When did the poet go to the moon? Did he stay there?
Answer:
The poet says that in his fantasy he went to the moon to take a look and returned to the earth.

Question 7.
What were the deeds performed by the poet in his world of imagination?
Answer:
The poet sailed the seven seas, went hunting and fishing with the Eskimos, went off to the moon, spent time in the forests of Africa and paid a visit to America.

Question 8.
What happened when the poet grew up? What are his feelings towards life?
Answer:
When the poet grew up, his childish world of fantasy came to an end. He became a serious man and this drove him towards frustration. He could not escape from the hardships of the real world.

Question 9.
What is the message given by the poet in the poem?
Answer:
Imagination combined with reading can help you enjoy and live in the world of mysteries whatever the age.

III. Read the poem carefully and complete the web chart: 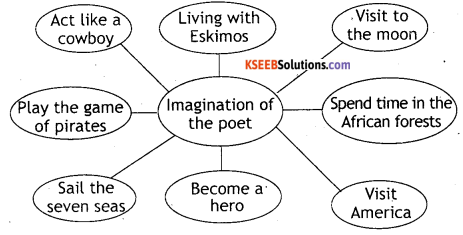 Question 7.
Who lived in the land of ice and snow?
A) cowboys
B) pirates
C) Eskimos
D) Dr. Livingstone
Answer:
C) Eskimos

a. Use your imagination and fill in the chart given below:
If I were,

Answer:
If I were

I used to play at Pirates,
And sailed the seven seas.
Then I was a cowboy,
These simple things did me please.

I had a vivid imagination,
Adventure was always on my mind.
I discovered the joys of reading,
And escaped the daily grind.

Once I lived with the Eskimos,
In the land of ice and snow.
Went hunting and a fishing,
My fantasy was all aglow.

I read a book of Jules Verne,
And went off to the moon.
It was just to take a look,
Then it was time to return.

I spent time in the forests of Africa,
With Dr. Livingstone as my guide.
Then off again to America,
With Huckleberry Finn I did hide.

In my world of fantasy and imagination,
I performed such wonderful deeds.
A Hero of all the Nations,
I was the one that did succeed.

Then I grew up, my childish world at an end,
I had become serious, it nearly drove me around the bend.
I still do like the mysterious: having unknown qualities.
This is the message I am trying to send.

This is a poem written by the famous Irish playwright George Bernard Shaw. In this poem the poet tells us how he lived in a world of fantasy and imagination. As a boy the poet used to play the game of pirates and act as if he were sailing in a ship on the seven seas. Then he would think he was a cowboy, taking care of cattle on a ranch, riding on a horse.

The poet as a little boy had clear imagination. He loved adventure. He took a liking to reading books and discovered a lot of joy in reading. While reading he would become so engrossed’ in it, that he would forget the hard and dull work of the day.

After reading a book on the life of Eskimos, he imagines to be living with the Eskimos in the land of ice and snow. He goes hunting and fishing there in the world of fantasy. The book transports him to the world of imagination. He feels as if he is living with them, as his mind sets his fantasy aglow.

When he read the book written by Jules Verne, he went off to the moon to take a look at it. After virtually enjoying his visit, he comes back to reality. The book by Dr. Livingstone takes him to the forests of Africa. He learns the ways of the jungle life under the guidance of the author. He reads ‘The Adventures of Huckleberry Finn’ and pays a visit to America in his imagination. He prefers to do the wonderful deeds done by the heroes of the novels and become a hero himself. Of course, all in the world of fantasy and imagination.

As the poet grows up, his childish fantasies come to an end. He becomes serious about the harsh realities of life. He could no longer lose himself in the imaginary world. The poet says that he still likes the mysterious nature of the books. He wants us to understand that books are windows to the world. Sitting at home, we can explore the whole universe. We can transport ourselves to those unknown, unseen places and experience the same joy we get when we visit those places in reality.

Pirate: One who plunders at sea
Eskimos: inhabitants of arctic
fantasy was all aglow: that which comes from one’s imagination

The main aim is to provide quality education for the students of Class 8 English Karnataka State Board Solutions. Class 8 is very important for the students in their career. We hope the information provided in this KSEEB Solutions Class 8 English Chapter 14 Imagination Questions and Answers is satisfactory for all. Bookmark our site to get the latest information about the solutions.