With the help of the Karnataka Secondary Education Examination Board Class 8 English Solutions Chapter 7 The Great Sacrifice Questions and Answers Pdf, Notes, Summary you can get an idea about the subject. Also we suggest the students keep the textbook aside to learn the subject in depth.

a) Read the extract from the Mahabharata and answer the following questions:

Kunti went to her son Karna and requested him not to reuse an arrow at the battlefield against Arjuna. Karna happily gave the boon. He thought that his mother was greater than his boon. Later on, he was easily killed by Arjuna in the battlefield as he would not re-use the arrow.

Question 1.
Why did Kunti go to Karna?
Answer:
Kunti went to Karna to ask for his Karna kundala and kavacha. She also requested him not to reuse an arrow in the battlefield against Arjuna.

Question 3.
What was the sacrifice made by Karna?
Answer:
Karna sacrificed not only his protective armour but also his life for the sake of his mother. He considered his mother’s wish more important than his life.

b) Discuss these points with your classmates:

Question 1.
What is the greatest thing that you can appreciate in your mother? Is it to give up everything she has for her child? Is it to give up her life for her child?
Answer:
Mother is considered to be God’s representative on the earth to take care of his children. Nothing can equal a mother’s love. A mother brings up her child with all the affection and love. In times of difficulty she is even ready to sacrifice everything she has for the sake of her child She does not care for her own comforts. Sometimes she sacrifices her own life. Both of these qualities are great. Only a mother does these and no one else. When it comes to the question of my mother, I do not want her to give up anything for me. I want her to lead a happy and contented life. I would do my best to keep her so.

Answer the following in two or three sentences each:

Question 1.
Why were Padma and Panna worried?
Answer:
Padma and Panna were worried because everything was going wrong since the death of Ranaji. No one in the state of Mewar was happy.

Question 2. a.
Name the person who was ambitious.
Answer:
Banbir, a half brother of Prince Udai Singh.

Question b.
What is he compared to?
Answer:
He is compared to a snake.

Question c.
Why were the other nobles powerless against him?
Answer:
The nobles had become mean and selfish. They were quarrelling among themselves. Though they hated Banbir, they were not strong enough to go against him.

Question 3. a.
What did Banbir make up his mind to do?
Answer:
He resolved to kill Prince Udai Singh.

Question b.
Why had he resolved to do this?
Answer:
He wanted to become the permanent Rana of Mewar.

Question 4. a.
What did the Prince’s mother tell Panna when she was dying?
Answer:
The Prince’s mother told Panna that she had lost everything except her son. She was leaving him in her charge. She asked Panna to bring him up like her own child and protect him from all harm.

Question b.
What did Panna promise the Rani?
Answer:
Panna promised the queen that she would give her life to save the life of the prince.

Question 5. a.
What news did Champa bring?
Answer:
Champa said that Banbir was talking to a man outside, and he would be there in a few minutes.

Question b.
What did Banbir have in his hand?
Answer:
Banbir had a naked sword in his hand.

Question b.
Where did she put him?
Answer:
She put him in a basket.

Question c.
What did she cover him with?
She covered him with flowers and leaves.

Question 9.
What are the main qualities you appreciate in Panna? Give reasons in support of your answer.
Answer:
Panna was a brave and courageous woman. In the time of danger she did not lose heart. She decided quickly what she should do to save the Prince’s life. She did not hesitate to sacrifice the life of her own son. She showed utmost courage and presence of mind. She was ready to do anything to keep her promise. Her resolute mind and loyalty deserve our appreciation.

Question 1.
The nurse of the infant Udai Singh was
A) Padma
B) Panna
C) Champa
D) Kunti
Answer:
B) Panna

Question 2.
The half-brother of Udai Singh who was ruling Mewar was
A) Kama
B) Ranaji
C) Rana Sangha
D) Banbir
Answer:
D) Banbir

Question 3.
The scene in the play takes place in the palace of
A) Chittoor
B) Mewar
C) Jodhpur
D) Udaipur
Answer:
A) Chittoor

Question 5.
Banbir is compared to
A) a snake
B) the Rana of Mewar
C) a fox
D) a murderer
Answer:
A) a snake

A. Use the following present time expressions in meaningful sentences:
(still, yet, now, just).

He has still not completed his work.
He hasn’t come yet.
He has just gone out.
She has cooked some food now.

III. Rewrite these sentences using words given in brackets at the appropriate places:

IV. Use the present perfect tense of the verbs given in brackets and fill in the blanks to complete the sentence: 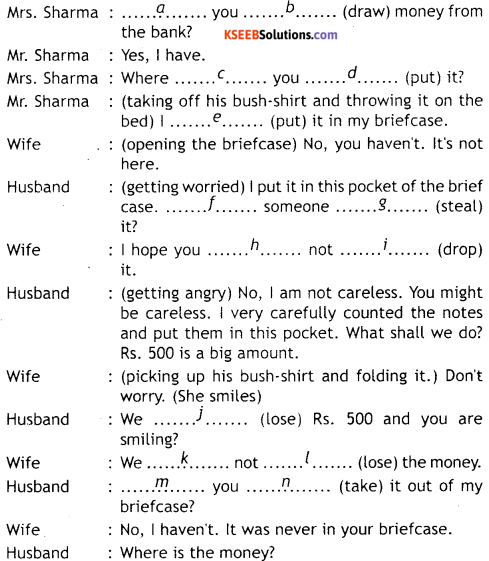 Answer:
strong × weak
like × dislike
end × begin
outside × inside.

b) Fill in the blanks with words from the first column and add sentences using words from column B as well:

c) Fill in the blanks using the correct tense forms of the verbs given in brackets:

d) Rewrite the above passage in the singular form. Begin this way.

VI. Use the correct forms of the verbs given in brackets and fill in the blanks:

VII. Imagine that Panna has just come out of the bed-chamber and is talking to you. Complete this paragraph:

The Great Sacrifice Summary in English

Characters:
Panna – The nurse of the infant Udai Singh.
Padma and Champa – Maids.
Banbir – a half-brother of Udai Singh, who was ruling Mewar for Udai Singh.
When the curtain rises we find infant prince Udai Singh sleeping on his ivory bed and Panna, his nurse, sitting on another bed. Her son, who is of the same age as the prince, is asleep beside her.

Padma, a maid, comes in. Panna and Padma are greatly worried about the political situation in Mewar. From their conversation we learn that Banbir, the half brother of the prince, had become ambitious. He had killed some nobles and suppressed the others. He had become an autocrat. Everyone was afraid of him. After the death of Ranaji nothing was going right. No one was happy. The nobles had become mean and selfish and quarrelsome. There was discontent among the people and in the army. Though Banbir was not liked by anyone, no one was courageous enough to oppose him.

Panna compares him to a snake. She says Banbir is an ungrateful person, and a curse to the house of Mewar. Padma tells her that Banbir was planning to become the permanent Rana of Mewar, and that he had decided to kill prince Udai Singh. Panna says, if Banbir has resolved to kill the prince, she has resolved to save the prince. Panna recalls the day on which she had promised the dying queen, the mother of Udai Singh, that she would give her life to save the life of the prince.

While Panna and Padma are talking, Champa, another maid, comes in running. She informs Panna that she had seen Banbir rushing towards the bed chamber of the prince with a sword in his hand. Panna requests Champa and Padma to help her. She lifts Udai Singh from the bed, changes his clothes and puts him in a basket and then covers him with flowers and leaves. She asks Padma and Champa to take the basket out of the palace and to hide themselves near the gate. She says that she would join them later. Champa is afraid that no one in Mewar would help them. Panna assures them saying that they would go to Asa Shah, a good and reliable man. Panna is confident that he would definitely protect the prince.

The maids depart with the prince in the basket. Panna dresses her own son in the clothes of the prince and puts’him in the prince’s bed. She kisses him a number of times and lies down on her bed. Banbir comes in hurriedly and asks her where the prince is. She points to the bed where her own child is sleeping. Banbir, without thinking, rushes towards the bed and kills the child with his sword. Panna cries aloud and falls on her son’s body. Banbir goes out. Panna thus saves the life of prince Udai Singh and keeps her promise by sacrificing the life of her own son.

The main aim is to provide quality education for the students of Class 8 English Karnataka State Board Solutions. Class 8 is very important for the students in their career. We hope the information provided in this KSEEB Solutions Class 8 English Chapter 7 The Great Sacrifice Questions and Answers is satisfactory for all. Bookmark our site to get the latest information about the solutions.